Star Trek Be advised that despite being an odd numbered Star Trek film, this movie kicks rather than sucks ass. 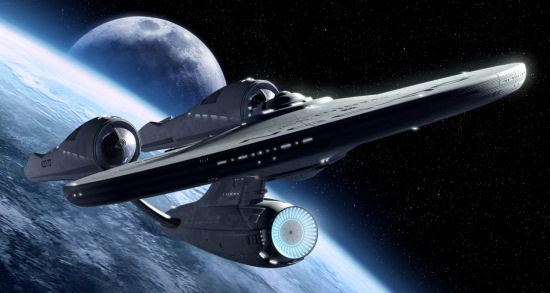 The film is at least as good as The Wrath of Khan.
Interestingly, its premise in some ways a mirror image of that film. Wrath of Khan explored the characters long after the series and how they had changed...or not...over the years.  This film ostensibly looks at how the characters started out, but because of the main plot point the film is a total reimagining. This reimagining however is astonishingly faithful to the original.

The characters are all well developed. The development of the Kirk/Spock/McCoy trio is absolutely dead on. (Karl Urban in particular is absolutely brilliant as McCoy.)

The secondary characters are all well thought out too, Uhura  is pivotal to the story and is every bit the genius she is supposed to be. Sulu, Scotty and Chekov all are well written and acted and its nice to see Chekov be presented as goofy-smart as opposed to...just plain goofy. Bruce Greenwood is superb as Captain Pike.


The villians, despite not being particularly engaging or interesting, work surprisingly well. The villany in this movie is a banal and simplistic evil that nevertheless wreaks untold havoc.
The villans plan is, not to put to fine a point on it....WHACKED, but they have tremendous power, murderous intent and the determination of a pit bull.

Despite the assurances that the film is not aimed at Trekkies there are in jokes and references galore...(a particularly painful "red shirt moment" elicited tremendous laughter from the audience).

I expected the film to be decent or at least interesting, I did not expect it to kick ass and chew bubble gum the way it did. To be sure there are a few logical quibbles and some plot points that are dubious, (mostly revolving around a bumpy bit of exposition at about the halfway point,) but the pacing is superb, the acting excellent and the action nearly non stop. As a sumer action flick this is great. As a Trek film it is one of the best.

UPDATE: Ubu liked it, so did this guy. (both via)

1 It is the best odd numbered Trek out there. But it is not better than Wrath of Khan, in my opinion. The reason Khan remains superior is not only the development of the characters, but the pacing of the movie. J.J. Abrams seemed to have only one gear in this movie: full tilt. That's nice in action scenes, but you need to have crescendos, rest periods (I know there is a better term but I can't think of it this morning), and then builds to the next crescendo.

Khan has a build up to the initial ambush sequence, then the aftermath where you how its affected the characters. Then it builds up to the first showdown on the Genesis planet, followed by the revelations of Kirk's past and his fears. Then it starts building up again to the Battle of Mutara Nebula.

By contrast, Star Trek doesn't seem to have this. It starts off dropping the viewers into first confrontation. Then with barely a moment to recover, you get the accelerated introductions to Kirk and Spock. Both of which keep going at the same pace. About the only build is in the Star Fleet Academy scenes. Everything else its like being a bullet train. It works in this film. But it would have been nicer to every once in a while slow it down a bit.

If only I could meld Nicholas Meyer with J.J. Abrams and it would produce the perfect Star Trek movie.

We never see her, but during a humorous scene where McCoy is trying to deal with some...medication side effects...he shouts at an offscreen Nurse Chapel for some medication. However, I'd have to watch again but I think that it was mentioned later in the film that she was "on deck 6"along with Dr. Boyce. I gathered that almost everyone on deck 6 died.  .

4 Wait...why the lack of love for Nurse Chapel?

More Uninformed K-ON! Blogging  I still haven't seen K-ON! yet, but this series went on my to-watch list when I first heard about it.
Pixie has had the credits up for two weeks and has some thoughts (including a very considerate earworm warning for the opening). I just now got around to watching them....

The closing is particularly clever and well done.
Well this show is STILL on the too-watch list.

Man, those dresses in the ED. I thought to myself, I never seen dresses like that before.

Then I stopped. I have seen such dresses once. Where was it? concentrate, concentrate, and suddenly I realized: it was in Girls High.