Oh Wow! I did not know this! Bunnyroll is on Cruncydrop!

I've only seen episode one of this inspiring little show. 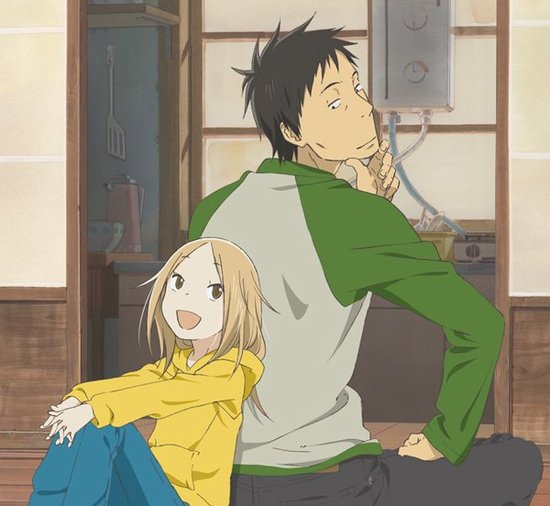 I actually have something to watch this season.

1 It's a wonderful show.  It's more realistic than Yotsuba& and has its moments of drama, but it delivers the warm fuzzies in spades.

Because We Aim to Please: Recently Pete Zaitcev won the "Why is the blog infested with Lamias?" contest and as a prize got to pick a post topic and chose to ask what my favorite manga is and why I like it better than others.

I must confess that I've been exceedingly busy and haven't read much manga at all for the last 18 or so months...with one exception.  While my to-read pile has gotten quite large, I've stuck with reading Yotsuba&! all that time.

Yotsuba; the titular character of this charming book, is a precocious child who has been adopted by her father from some far away place in the developing world. To her naive eyes everything in Japan from sunflowers to doorbells is fascinating and a potential springboard to adventure...or mischief.There is no real plot, though there is a bit of continuity.  The series consists of sketch comedy and is greatly assisted by Azuma Kiyohiko's outstanding comedic timing in the comic medium as well as his amazing ability to see the world with a child-like sense of wonder. This, the expressive art, memorable secondary characters and refreshing innocence make this outstanding series a rare gem. I highly recommend it to anyone.

However, EVERYONE likes Yotsuba&! (except bad people). I don't think I have ever seen a bad review. Furthermore, since I haven't been reading other manga for over a year I can't give the comparative review Pete asked for or the book deserves.

Finally, it is obvious from his request that Pete's request for a review was not at all what he really wanted, but a fallback position.

It seems that Pete is, in reality, uninterested in such refreshing innocence and actually wanted something entirely "other" but felt it was a bridge too far. Well we here at Brickmuppet Blog aim to please, so gird you loins as we cross that bridge...The Bridge Over the River Kowai. 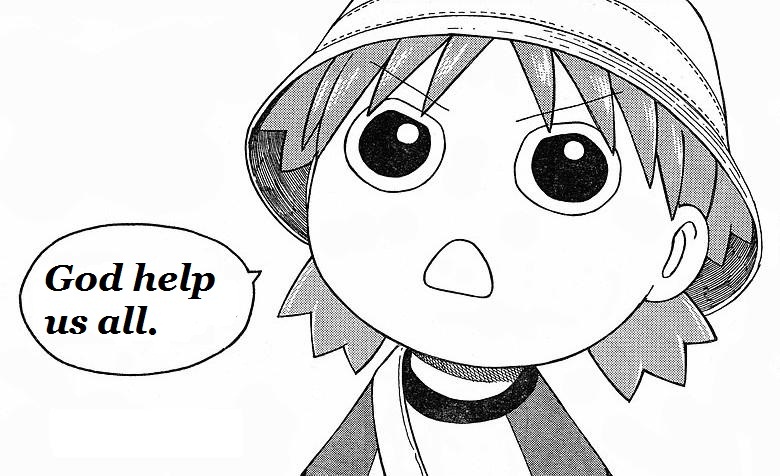 Good people should not look below the fold, for that way lies depravity.

2 I feel better now that I know I'm not the only person who thought that manga was charming, in an off-kilter way.

3 It was, but Slime killed it for me.

4 It didn't quite kill it for me, but it kicked it in the kneecaps (along with the other bits I mentioned). I'm going to see if they regain their footing, but I'm not optimistic.

5 I liked the originals better, mostly because each brother was focused on his relationship with one monster girl. If I were adapting it, I think I'd have gone with a boarding-school setting, with a mixed-gender Kaiju Social Integration Club having to deal with each new monster as she arrives and creates her unique brand of trouble.

Still a familiar formula, and all the current stories would transfer over with little change, but I think it would hold up a lot longer. The problem with making it a harem is that he can't tell in-depth stories about just one girl; for instance, I can't see him successfully doing something like the two Dullahan strips from the original.

6 I actually agree that the little strips were more satisfying . However, I've tended to attribute that to one of my own sick personal fantasist kinks....

The charm of the strips and the early issues here was that they characters were IN LOVE and were working to make their relationships work despite hurdles like different backgrounds and really sharp claws. The current harem dynamic ruins that because there really ought not to be any hesitation in his choice...he might be constricted but he ought not to be conflicted, otherwise he's a heel.

Now, he has inadvertently, legally, betrothed himself to the Centaur, and she will be ruined and there will be political ramifications  if he doesn't choose not to divorce her..that adds dramatic (albeit silly) tension especially since she's a likeable loon. But beyond that the show will quickly loose the intimacy that initially made it charming.

Counter-intuitively, this current set-up could be salvaged if they'd add more...guys. Just have him do some more carpentry and turn happy hellspawn house into a Maison. Then have the strip focus on the misadventures of Monstergrrls of the month and boyfriend. This would allow a closer focus on the creaturettes,  a wider variety of "audience identification characters" and it gets back to the idea of two people trying to make things work despite considerable engineering challenges.

Pitch it as Boys Be...but with twenty/thirty somethings and tentacles. 8 Well.... I agree, it's slipping.  Now they've added a mer-girl.  Who was obviously that from the start, in the wheelchair.

And to amp the raciness, we got to see what happens when Slime gets dehydrated.  Suffice to say, she'll go after moisture...anywhere she can find it. It was a very hot day for the girls.

9 Wait...was EVERYBODY but me following this before Pete asked for a review of it?

10 I merely thought Miia was the best Lamia. But this was quite a preference cascare, I have to admit.