A Failure to Communicate Is becoming the bane of our heroine. 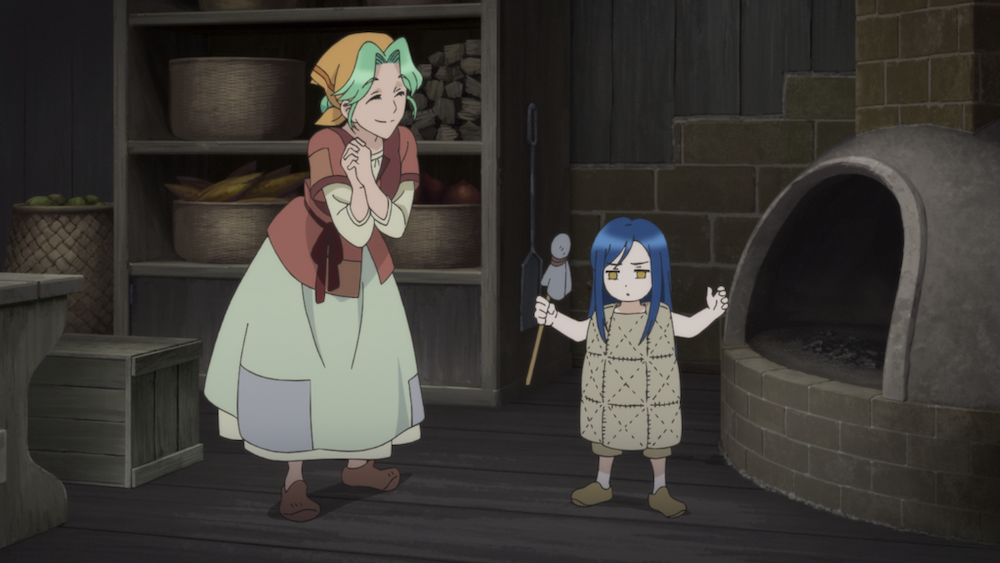 From episode 5 of Ascendance of a Bookworm in which our heroine discovers the cost of ink and has her most cunning plans embezzled in good faith.

Also that "eye thing" remains unexplained, but potentially disturbing.
A few possibilities:
1: It seems to be associated with her despair and when it manifests itself, her soul seems to become somewhat un-moored from her body. She only recovers when she remembers some obligation or connection to life. Lutz mostly. So since her whole situation is tenuously preternatural all she needs to do is give into despair and poof, she's dead again.

2: THIS ISN'T HER BODY. Remember our heroine, Motosu Urano, died in an earthquake and woke up in the body of a 5 year old named Mai(e)n, who had presumably just died of being...sickly. This appears to be the case and is pretty bad in and of itself but it could mean that...
3: The real Main is not dead, but possessed by Motosu Urano and the "eye thing" is Main trying to get her body back from this crazy person who's running it into the ground.

Also worrisome, but less likely is the possibility that Otto has eyes for Lutz.

1 We were thinking #1 or #2.  My wife recalled (I drink too much to recall) the opening of the series where a priest/alchemist puts a circlet onto Main to recall* her memories.
The colored-eye thing happens in emotional distress, not despair.  If the writers are on their game, that's a point.
*If they are erasing her memories** for bring "a witch" I shall resist the urge to fly to Japan and crucify the writers.
**I know japs see "the person" distinct from "their memories."  I not only find this alien but disgusting.  Not my blog, not my post to carry on.  Still love this show.  So far.

2 No on #3, and Otto is very, very devoted to his wife, as will soon become clear. Also no need to smuggle nails into Japan; at the current pace, I don't think she'll even meet the priest this cour. There's a lot of ground to cover.

3 I figure the eye-thing is a manifestation of some innate magical talent that's responding to her emotional distress. We know there's magic, based on the priest from the first episode.