This was ill considered, for the people at Gainax had nefariously used the DVD as a delivery vehicle for an advanced, bioengineered, fanboy-optimized, formulation of crack.....
John C. Wright recently opined upon some of the important qualities that the Star Wars movies lacked.....

...  Let us compare and contrast: the sequels to, let's say Galactic Patrol by Doc E.E. Smith or the sequel to Skylark of Space got bigger by orders of magnitude to their predecessors. In Galactic Patrol the Gray Lensman is fighting Space Pirates. By the third or fourth sequel, he is fighting in the immortal interdimensional super-psionic superhuman creatures of Eddore. In the Skylark of Space Richard Seaton is fighting the World Steel corporation. In Skylark Duquense, he is teleporting one galaxy into another galaxy to turn the whole thing into a galaxy-sized cloud of supernova material, meanwhile teleporting all the human planets through the fourth dimension to a third and safer galaxy.....

This childrens cartoon, notwithstanding its so-so art style, bizarre Tex Avery-esque gags and over the top garishness, manages to put itself very nearly in that league.

Through the fabric of the silliness, the contrivances and the sight gags is woven a story of courage, betrayal, pathos, sacrifice, nobility, honor, hope, vision and star-spanning grandeur. What began as a tale of a boy, trapped underground, who merely wanted to see the sky, culminates in a series of escalating battles for the fate of the very universe, against an implacable enemy with whole galaxies used as weapons. The show builds to a thoroughly satisfying climactic battle as the whole of Earth looks up into the sky to witness a confrontation that dwarfs in scope the showdown with Lee and Kirby's Galactus.

The tale has poignancy, teh Yoko(!) heroic noble sacrifice, and teh Yoko(!), plus an ending that is as rewarding a payoff as any I've seen in years....

....which is cruelly interrupted by the actual, Gainax ending. (but see below) The main thrust of the 3rd DVD is the attempt to rescue Nina Teppellin who was revealed at the end of the second DVD to have been taken over by the villains (who had, it seems, mucked with the DNA of all of the Spiral Kings children so they could, if needed, be  used as a spy/test subject/herald).

Poor Nina, the awkward, weird, spooky girl whose sense of decency, emotional strength and raw courage had saved humanity twice.... the earth once....and the whole effing universe at the end, is finally rescued.

She had saved the Earth and ultimately the universe, because she had been able, through sheer force of will to repress her programming and eventually throw it off entirely.  She was in the process of being sort of...umm...digitally vivisected...when the heroes, having suffered terrible losses finally arrived to her rescue. Upon her rescue she was pivotal in the surviving heroes victory over the enemies of life itself.

After the battle she and Simon are finally married.

As the two of them kiss she disintegrates in his arms.

The explanation that is given is that she was a villain construct who could not survive once the villains had been eradicated...and had kept herself corporeal by sheer force of will until she could finally marry Simon...only then, in mid kiss did she allow herself to die.

The actual explanation is that the Gainax writers are sadists who hate their audience with a passion and contempt that is indicative of some deep character flaw.

OK....perhaps not. The passing of Nina is, romantic and poignant and smacks of a Greek tragedy....but, still,  it really felt to me like a cruel nonsequiter.

The fact that Simon hung it up and returned to digging really hurt too...though I suppose some will find that romantic in a way.


Objectively, the show ends on an upbeat note, the universe is saved and made a vastly better place, it was a wild and enjoyable ride that kept me glued to the TV for 3+ hours, but the unnecessary and out of the blue gut punch really spoiled it for me as it just felt mean spirited and pointless.
The epilogue is cool and uplifting, though in my opinion it did not quite compensate for the aforementioned surprise. (Which, in fact, bothered me to distraction... which is why I took time out on pre-exam Sunday to blog about it.)

All that being said, Gurren Lagann is a remarkable accomplishment and absolutely worthy of its considerable hype. Rewatchability is low because of the bittersweet ending, but it is otherwise highly recommended.
4.89 of 5 bricks.

UPDATE: On the advice of one of my weird...nay...criminally weird commentors, I re-watched the last episode after exams were over. Watching it when I hadn't been up for 26 hours put it in a rather different perspective. Specifically, it allowed me to catch the mentioned foreshadowing. The moment is brief but grim, as the murderous spokesman for the Greenpeace Cosmic is being clobbered Nia sort of pixilates.
Both she and Simon look at one another, realizing the implications, and Nia proceeds to help Simon save the universe anyway...despite both of them knowing it will likely mean her death. The ending which seemed to be a spiteful Gainax moment then, is actually a very nice, if bittersweet extension of Nias brief reprieve. Nia is in the latter half of he series is a terribly pitiable character, but she is a strong and noble one as well. The show is not just about heroism, idealism, and living life to the fullest. It is also about dieing well..   Suffice it to say I've modified my opinion. Far from being spiteful, the ending is both tragic and heroic. The epilogue, as I mentioned, is quite upbeat, and is in keeping with the sense of wonder that this goofy show somehow manages to convey.

This was an awesome show.Watching it while awake made it noticeably more awesomer...er...gooder...ummm...

(It should be noted that the surprise return of teh Yoko was handled quite well and while she is less central in the latter part of the series, she is occasionally pivotal, gets to kick rather more ass and is further established as a likable, ethical and decent character...Here she is in her superheroine outfit and in her cunningly unassuming alter ego....as mild mannered school teacher 'Yomiko') 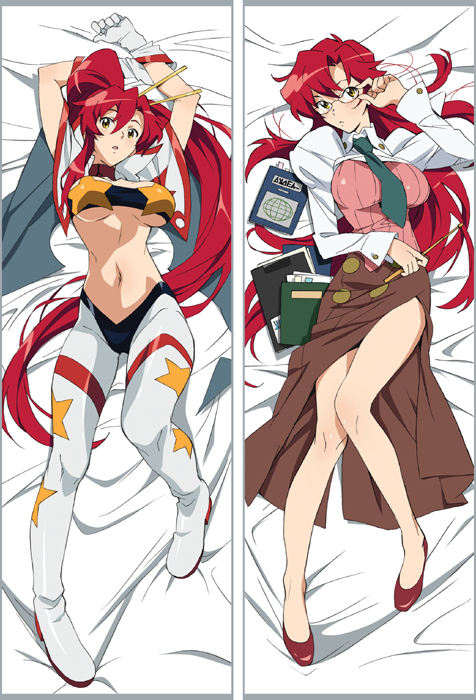