What the HELL Did I Just Watch!? Please Tell Me Galko-Chan! has been getting some positive buzz, so I decided to give it a whirl.
The series is a slice of life show revolving around three young ladies, who, in their own way, are...different. From left to right: We have Galko the EPONYMOUS ringleader of our group of misfits. She suffers from acute Steatopygia, Macromastia, and blonde hair. These tragic deformities have resulted in her having a completely unearned reputation as a...party girl. She is quite good at reading prose. To the right of her is Oujo, a young lady from a rich family with pitch perfect etiquette and an immaculate uniform, who suffers from the tragic handicap of being an airhead. Finally there is Outo, whose disabilities include myopia, frumpiness and being a smart ass. 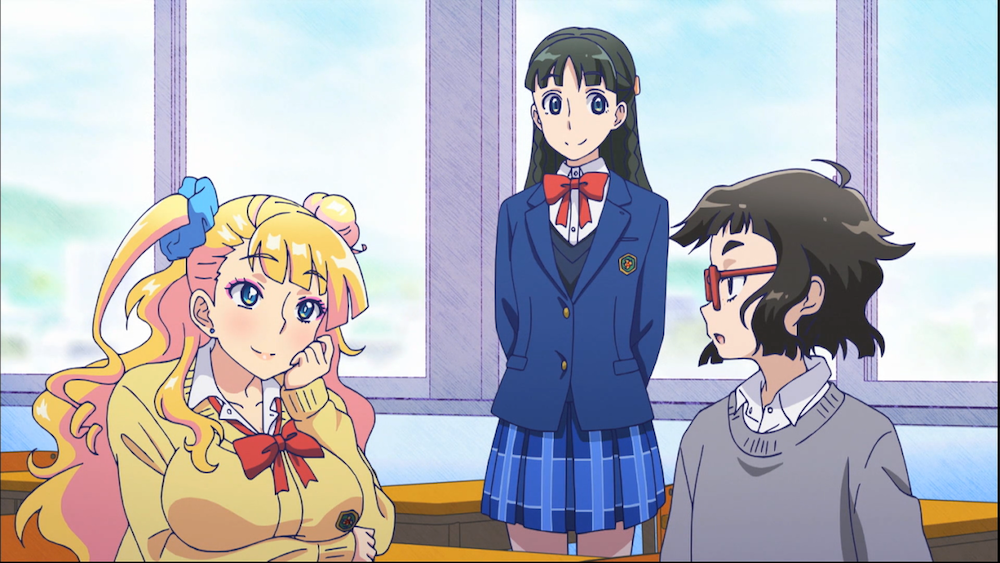 Over the course of the first 7 and a half minute episode they discuss such deep philosophical topics as nipples, pubic hair and poop...both spicy and sweetened.
So it's kind of like Katawa Shoujo meets Beavis and Butthead..but without the angst or the music videos.
What the hell Japan?!

1 I'm afraid I didn't set the expectations forcefuly enough. At least for me, the best part of Galko was the characterization, rather than the subject matter of the conversations.

For example, I mentioned the case of Charao fixated on Galko while on a date because something like that happened to me when Kojiharu's pictures in bed with some actor pretty boy were floated around. I remember that for some couple of days after that, I sometimes found myself wondering randomly why Kojiharu is so dumb and what's wrong with her (news reports at the time indicated that it was a part of her attempts to shed a "good girl" image - it was almost like Brittney Spears serial marriages). And it's not like I care about entertainment personalities in general. I'm not her fan in particular either. I have the Heart Ereki CD, but mostly for unrelated reasons. Likewise, Charao isn't in love with Galko either... He just can't help getting fascinated by the damn shirt.

The pool shota was phenomenal too, I thought. It wasn't quite powerful like the assberger shota of Initial D who had his balls drop at the sight of Mako's slender legs. Galko's focus was once again how she combines all the appeals of playful exterior and kind personality in a certain kind of life example (not only for the shota, but for his lowlife girl classmates as well, hopefuly).

I got far enough into the first episode to where they were talking about whether the aurolea (or however that's spelled; I refuse to look it up) on an eponymous also was big. And one of them draws circles on a balloon with a magic marker.

And then I decided I didn't care anymore.

It didn't help that I'm repelled by the character art.

3 So...while reading one of the comments I came across these words typed in this order...

"The pool shota was phenomenal too" 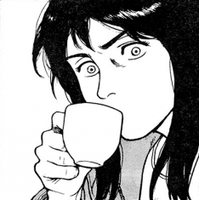 ...and I'm thinking that there has got to be context that I'm missing 'cause that just does not look like it belongs in a pitch that's attempting to get me to watch something.

4 Aww man, I went and rewatched 01. The best part is when Otako brings the pillow. Her intelligence and foresight are off the chart. I could never have done that for my best friend in school: even if I figured it out, I would've forgotten it in the morning.

5 Yes but that was a fairly fancy pillow and now it probably needs to be burned.

6 It was a donut pillow; getting sat on by people with tender rears is what it's for. ;p

I had a couple of friends who had the same reaction as Steven. "Ugh" and nope'd right out. And that's a fair reaction - the show is not merely earthy but outright fertilizer here and there. If that bugs you, definitely not worth it to wade through.

Maybe I should say that it's offensive, but in a genuine way rather than one intended to titillate the viewer.

They're good friends, which is rare.  They, esp. Outo, make some mistakes about that, but it's a pleasant show to watch.

Offensive?  Titillating?  I've two teenage daughters on a highly competitive swim-team.  You'd be amazed at what girls talk about; and these days, they could care less who's listening.

8 Okay, in case you didn't notice. All niknames except Ojou's are made by using a characteristic word, or its stem, then either applying "~ko" for girls and "~o" for boys. Thus...

Gal-ko is "gal". You know about the Gal subculture, right? Mika Jougasaki etc. I still remember when this sort of thing was called "kogal".

Niku-ko(-cchi) is "meat". Because it wasn't so funny in Haganai.

Boys are a little harder. Well, not Spo-o, whose name means "sport". Ota-o is male Otako. But why Chara-o? He is supposed to lampoon a VN character? Or what?

11 Thanks. What about Okako? It's the tall girl who stoops. Also plays in a hard rock band.

12 That one I don't know. (More like, I got through the show without learning that was her name...)