School Live Episode 9 In today's episode of School Live,  Miki takes a break from analyzing the purloined papers they got from Sakura Sensei's office, and announces that she's made a surprising discovery. 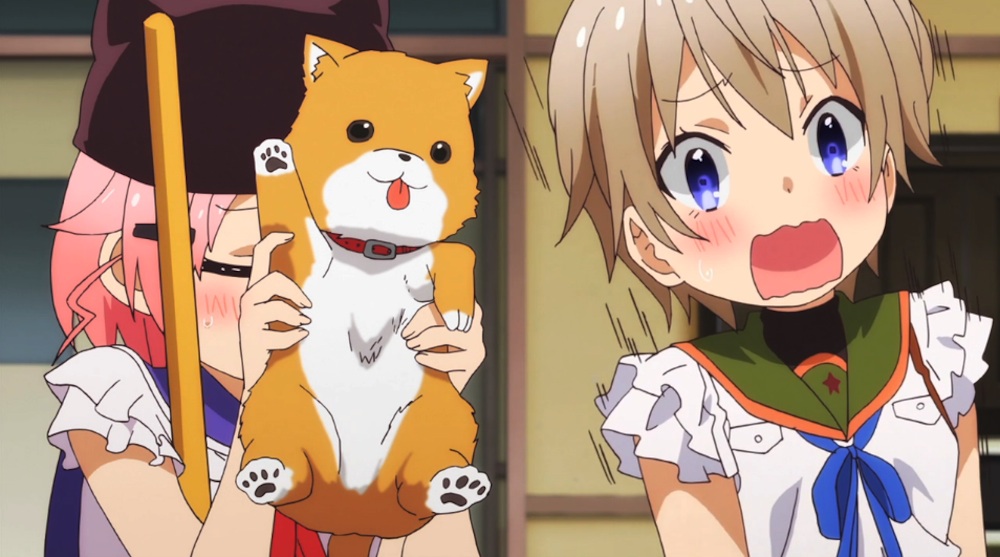 "This dog...There's no.......IT'S A ROBOTI!!"
Actually, no.
She discovers that her day is to consist of the sort of obligatory beach episode that almost always shows up in vapid comedies about cute girls in high school being nonthreatening. Thus her surprise at it happening in this series is entirely understandable.
Given the premise of the show, that the School Live Club is not to leave the school grounds (especially after that fiasco at the mall); a beach episode would strain credulity, but they get around this by having the girls clean the koi pond on the roof.
...of the school...
If you are pondering why there is a koi pond on the roof of the school, you are not getting into the spirit of things...or you've avoided the spoiler tags.
That a Japanese cartoon airs its summer vacation episode on Labor Day Weekend only adds to the overall unlikelyhood.
In any event, hijinks ensue. 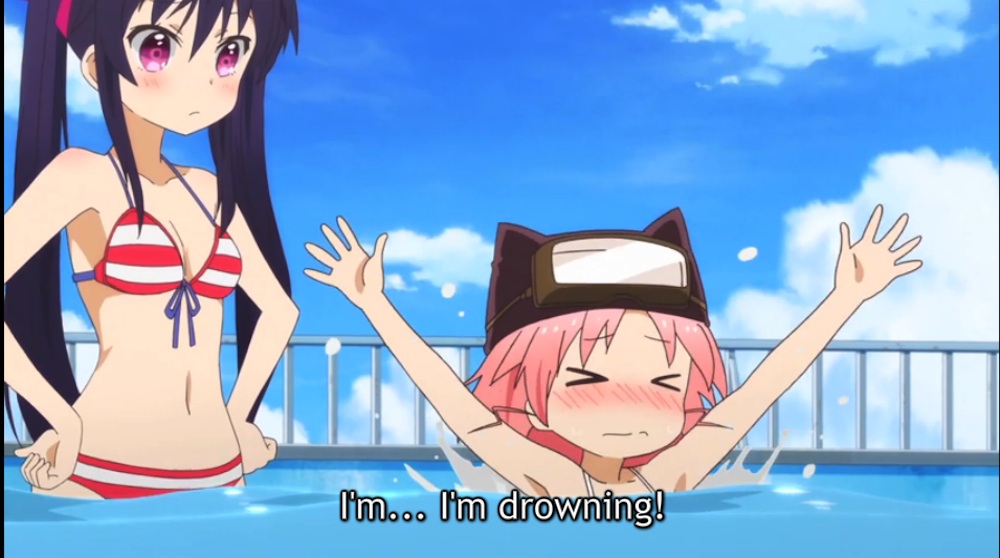 ...including a surprisingly epic water-gun fight.
Despite the fact that this is mostly a straight up 'day at the pool' episode the show remains engaging and intelligent, contrasting their determination to remain upbeat against the series of perpetual annoyances that is high school.
I do note that over the last two episodes point of view has changed to the extent that the narrator is now being less dishonest than your humble reviewer.
For one thing the discovery Miki makes when going through the "CONTINGENCY PLAN FOR ZOMBIE APOCALYPSE" document is actually that there is a sub-basement-bunker underneath the school, that the other girls were heretofore unaware of. Of course in last week's episode we learned that the zombie apocalypse was anticipated and associated with a bioweapon, while the girls contemplate a reconnoitering of the basement to get supplies and perhaps more answers, Yuki's suggestion that they clean the koi pond derails the plan because, frankly, these girls need a break bad.

One bit I'd forgotten about from the mall episode. 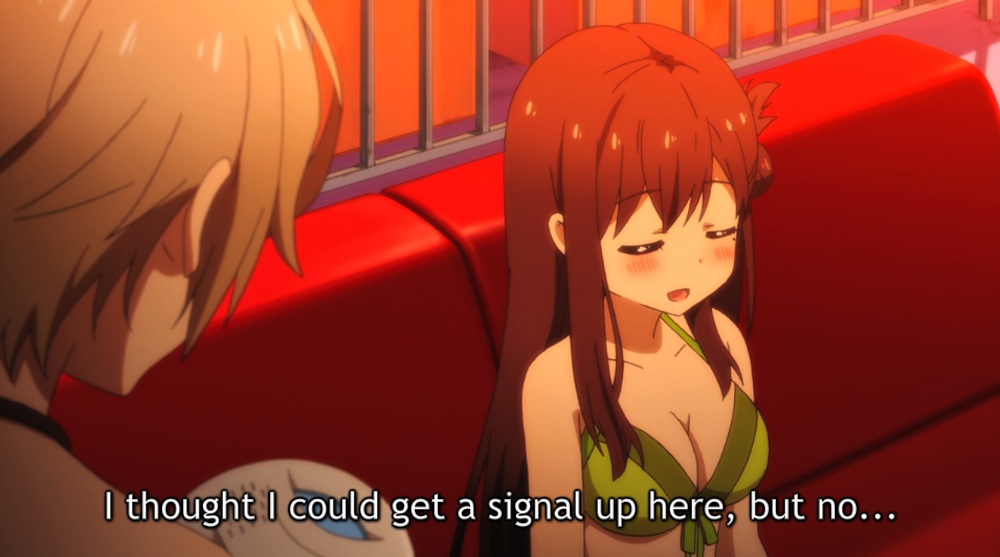 The radio confirms that the outbreak is not confined to their town or valley.  This had been implied as a possibility last episode, but no, the show managed to dash those hopes.

There is also discussion of the solar arrays and water purification system. The latter uses water from the river rather than the cistern which answers questions regarding their water supply.

Despite their discussion of their situation (out of earshot of the utterly insane Yuki of course) the episode was, in fact a much needed relief and change of pace.

Well until the end when the dog broke loose and ran into the basement and we saw this... 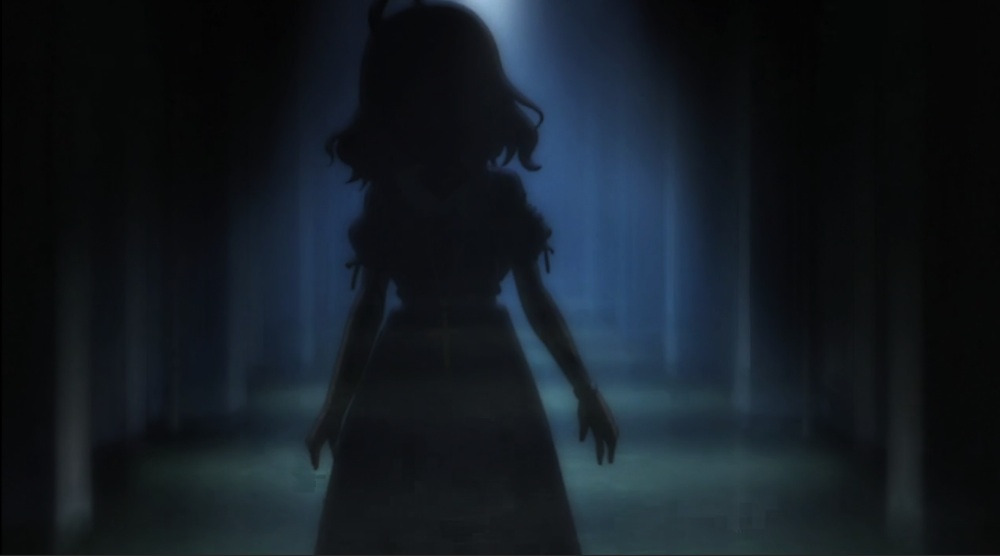 So...what is that mound under the cross on the roof? (I'm guessing it's Kurumi's fiance?) Is there going to be another one for the dog?

Still, as grim as this show can be, it is remarkably  engaging.
This is a really smart and well done show, surprisingly touching in that it is about dealing with life's little problems in as upbeat a way as possible and the benefits of persistence.... 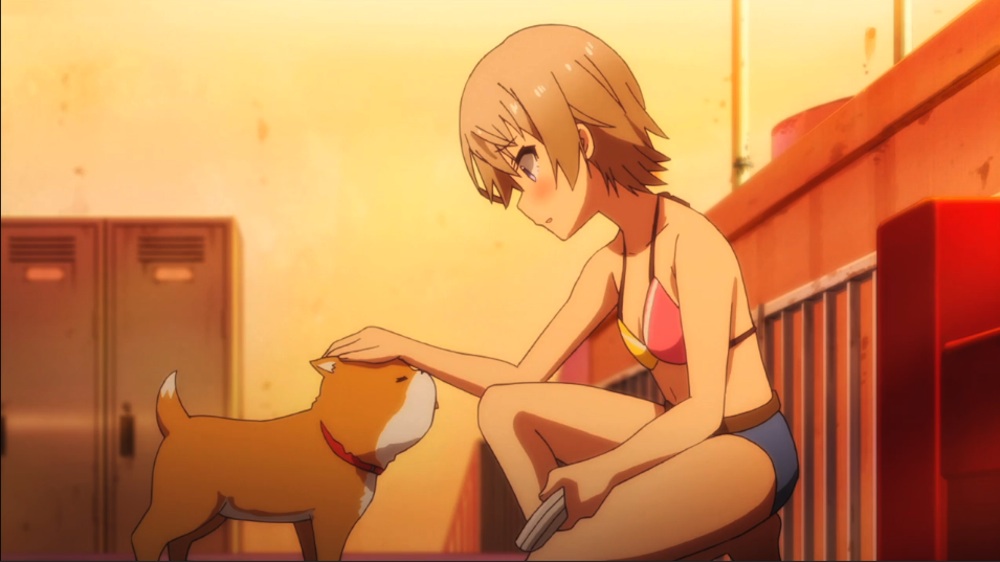 You know, in hindsight this is an even more meaningful development.
Despite its overdone premise, this remains, thus far, one of the best shows this season.

"We're pretty close to giving up on this series, aren't we?"  Said my wife, speaking for us both, while the dog growled.

If I want to be unhappy, I can drive into Columbus and go to work.  It's just that this series is too tanjed well written to abandon...yet.  We'll give it yet another episode....

2
So...what is that mound under the cross on the roof?

ISTM that Sakura-senesi is partially transparent in that screenshot, i.e. she's a ghost (as ReallyBored speculated in the comments for Episode 6), and not a zombie. So it's still possible that the mound with the cross on it is her grave, after all.  If that the case, then Sakura-sensei is dead, which (in a morbid sort of way) is a good thing--better dead than zombified, IMHO.  OTOH, she isn't resting in peace.

Going back to RB's comments for Ep6: perhaps when Yuki is talking to Sakura-sensei, she isn't being (entirely) delusional--she may actually be talking to Sakura-sensei's ghost.  That might be contributing to Yuki's insanity.  The next question is, why is Sakura-sensei's ghost haunting the school? Is she seeking revenge on Yuki (who may have been partially responsible for her death), or is she trying to help Yuki and the other girls?  (I really hope it's the latter.)

3 Well, PTNSG, that would explain much  I'm not sure though. The implication seems to be very strong that she is a zombie, especially after the bit with the journal at the beginning of last episode. Of course, having been zombiefied her ghost might look as she did when she died. I don't know. This show has been less than straightforward at times.

I'm kind of surprised that this episode was almost upbeat (until the end) & even the end only confirmed something that had been hinted at last episode.

4
The implication seems to be very strong that she is a zombie, especially after the bit with the journal at the beginning of last episode.

I took another look at that screencap, and although Sakura-sensei still looks transparent (like a ghost) to me, she also seems to be shambling like a zombie, and she has what look like open sores on her left arm. The left sleeve of her dress appears to be torn, as well.

Of course, having been zombiefied her ghost might look as she did when she died.

That is a possibility.  That also raises two questions, one of them potentially disturbing:

1.  If Sakura-sensei was a zombie when she died, and she retained her zombie appearance when she became a ghost, did she also retain her zombie mentality, or does her ghost still have her human mind and personality?
2.  How did she die after she became a zombie? The disturbing possibility is that the girls killed her, either in self-defence or as a mercy-killing.  (Now that would have driven Yuki insane, I'd bet.)  OTOH, killing a zombie would have been a very tall order for the girls, given their apparent lack of suitable weapons.