RWBY Second Season Ends
After the spectacular home run that was episode 11, the Finale of RWBY season 2 fell rather flat. The animation was off, and despite a several moments of awesomeness there was a rather perfunctory feel to  the big climactic fight, which seemed disjointed and not entirely consistent. Basically everyone got a moment to shine though there was very little of the spectacular Monty Oum choreography that had been so impressive in previous fights and in fact the fight was so by the numbers and below the standards of the rest of the season that I suspect they ran out of money, time or both in this episode. On the non-technical side, there were some things that just didn't quite work. Coco's minigun was just plain silly. All the other weapons that aren't super-tech (Penny) have had a logic to their operation, a mechanical consistency and a sense that they were, if not practical, at least compatible with  Newtonian physics...This thing on the other hand just did not belong in her purse.... 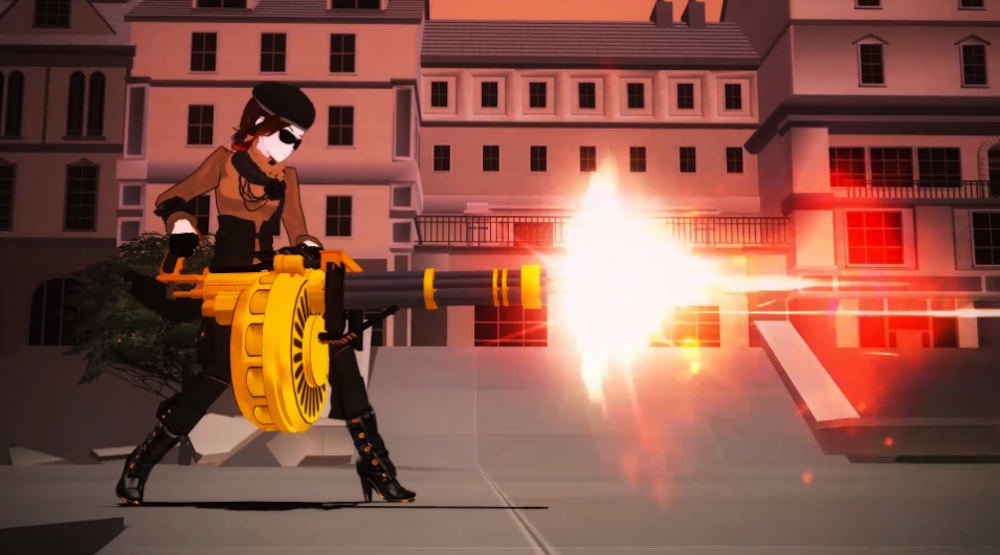 Of course the other problem had to do with a general lack of answers, though this is not nearly as egregious as it would normally be, since it's pointed out by Ruby herself while our heroines recover from the day. 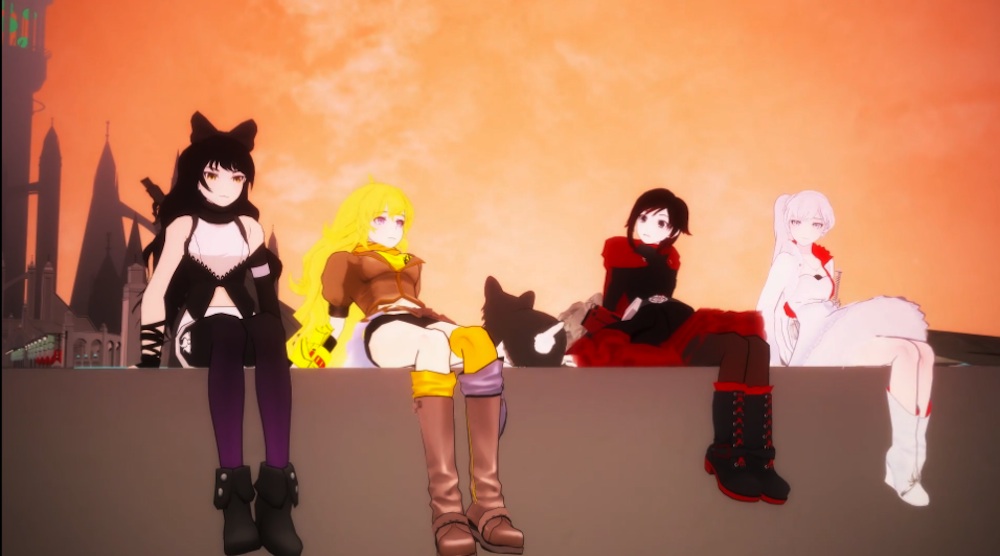 "Wait.We helped arrest a bunch of very bad people but we didn't really solve anything!"
Like the fist season finale, this one did not feel like a climax at all, but rather seemed to be just another episode, steadily moving the plot along, with the rather sedate last half of the episode being in a lot of ways better than the nonstop action of the first half.
It's not a bad episode,  but is also not up to the high standards the show had set for itself.
That being said though, this season overall has been quite enjoyable. While the first season of RWBY amused me quite a bit. The second season has (overall) been even better.
This is despite the fact that, in sharp contrast to the carefree whimsy of the season opener, the overall tone of RWBY season 2 is quite a bit darker than the first.  Fortunately, the show avoids descending into something grimm depressing, thanks in part to its oddball, upbeat quirkiness.
Also: The super heroines get a corgi
While it is still obviously a very low budget show, the animation, art, pacing and voice-work are all much improved over season one. I've heard griping about what at first seemed to be an awkward subplot (involving side characters) that suddenly metastasized out of nowhere. However, unlike a similar digression in the first season, its resolution was both unexpected and satisfying. Plus, it ended up advancing the larger plot quite nicely.
The protagonists remain likable and have gained a bit more depth. Crucially, teams RWBY and JNPR consist of people that one actually enjoys rooting for. They are flawed human beings, sometimes wrestling with dark secrets, despair and self doubt, but they are not anti-heroes or cynics. These are an idealistic bunch who want to make the world a better place, want to do the right thing and are willing to pick themselves up and struggle on even if they get knocked downâ€¦hard.  This is important because our heroes are punching well above their weightâ€¦rather more than they seem to realize.
The villains really came into their own in this season and are actually a pretty interesting lotâ€¦. Exactly WHAT their ultimate goal is remains unclear, but they are not incompetent and can think on their feet.  They are, overall, quite worthy and occasionally terrifying antagonists.
These 12 short episodes were 144 minutes of my time that I do not regret. Despite the non-finale that was #12, I find that Iâ€™m eagerly looking forward to the third season.

1 Re: the dog.  This must be the year of the Corgi or something, because the tenth anniversary of WoW, going on now, gives every character who logs in[1] a Molten Corgi battle pet[2].
[1] that was possibly a bit excessive.  I have about 6 characters I play semi-regularly, and you can only have 3 of each unique type of pet, so I can't even use all of those Corgis.
[2] Basically, it's Pokemon-very-lite.

2 Also--I can see in retrospect how that was a season-ender, but I did not know that until I read this post, which I missed somehow the first time around, until you referenced it with in a more-recent one.

3 You didn't actually miss it. It languished in draft form for 2 weeks.  There is no "bump" function and cutting and pasting it into a new post has caused formatting strangeness of late.  I think the blog is actually haunted.

4 They draw a dog much like Ein on Cowboy Bebop, and they name him Zwei? What, is Ruby an anime fan?

5 Unlikely, but I'll go way out on a limb and speculate that Monty Oum is. Canonically, I suspect that he is simply their second dog.