Ridley Scottâ€™s Prometheus is an uneven film that alternates between the best and worst Hollywood has to offer. Blessed with superb production values and some very interesting concepts, the film suffers from a lack of focus, a lack of believability, and most unfortunately for a horror film, a lack of actual suspense.

The film follows a pair of archeologists who have become convinced that life on Earth was seeded by aliens. They convince the CEO of an exceedingly wealthy conglomerate to finance an expedition to a distant star they believe is the home of the aliens who engineered life on earth. They find out that they might be right, but in the process discover unspeakable ancient horrors. 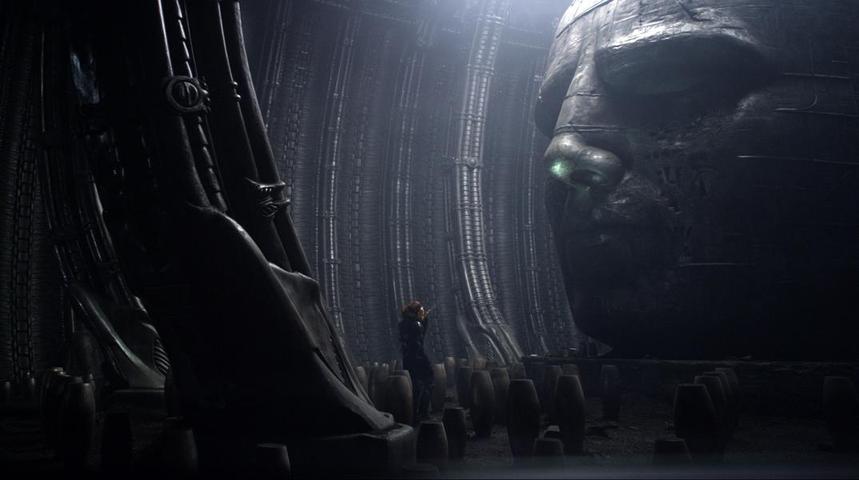 Ridley Scottâ€™s films tend to be visually striking and this one is no exception. The shipboard sets are futuristic in the extreme, yet they appear quite functional. The lighting and subdued color in certain exterior shots give a genuinely unearthly feel to the alien world. The set designs of alien passageways achieve a particularly interesting effect, giving at once impressions of the grandeur and massive scale of the structure while also conveying a sense of profound claustrophobia. When alien life is encountered, it does indeed look quite alien except in once case where the familiarity in appearance is the point. Even handheld tools loot futuristic but practical. A combination computer notepad/ flashlight/ sample collection kit is particularly well designed. The spacesuits are based on some of the latest work by NASA and MIT. Yet they have subtle touches that harkens back to â€˜50s sci-fi in a brilliant blending of retro and futuristic design elements. On the other hand  the flamethrowers look really toy-like and also lead to a believability question: "Why are they bringing FLAMETHROWERS of all things?â€

That failure to suspend the audienceâ€™s disbelief is one of the major problems of the film, the flamethrowers being the least egregious example. A few others include:

A woman, who gives herself a cesarean and spends the rest of the film doing action heroine physical antics.

A group of scientists on an alien world who just take off their helmets when they discover the atmosphere is breathable (alien germs be damned).

The film is billed as a horror movie. However, there is little in the way of actual suspense. Two scientists behaving quite stupidly, die horribly and very predictably. There is betrayal aboard the ship which the audience most likely saw coming a mile away. The scares all have a very perfunctory feeling to them and the only real surprise is the shocking and quite disturbing visual of the aforementioned cesarean operation. This bloody endeavor removes not a child, but a quite hideous and very active tentacle monster.  This is no doubt supposed to be the jaw dropping moment of the film much like the famous chest-burster scene in Alien. It is quite graphic, but in the theater, the audience was giggling at that point.

The movie is not a direct prequel to Alien, but it does establish what is going on in that universe. It also has some interesting concepts but they are only slightly explored.

Michael Fassbender plays David, a rather sinister android and he does a superb job of conveying his nonhuman perspective. It's implied that he has developed a rigid code of ethics...just not human ones. He seems to have aspirations as well. This is something the rest of the characters tend to miss and it is a neat transhumanist twist. Fassbender gives a deadpan performance with subtle tics that convey a palpable sense of frustration and yearning without expressing any actual emotion. However, this is never explored to any depth.

There is a fatalistic and  yet inspiring message about heroism. One plot point revolves around a character sacrificing himself in such a way no one will ever know that he saved all of humanity. The main plot with its Lovecraftian overtones has tremendous potential as well, but this is never fully realized.

Instead the film wastes all its good effects, visuals and quirky ideas on a disjointed story that has a decidedly paint by numbers feel to it. The films excuse for suspense is a collection of haunted house and slasher film tropes.

Prometheus is an intriguing, gorgeous but ultimately quite disappointing film. I had high hopes for it but they were largely unfulfilled.