Sometimes The Sun is a loving mother bringing life to the surface of the earth Sometimes it is a strict father bringing terrible trials. These trials, which have occurred many times since the creation of the earth have come once again. The land is dry, the oceans barren, what little life survives is on the verge of extinction, clinging to the thin atmosphere that remains. But some still live on in the dry seas of sand....


Thus begins Ozuma (Ozma?) a series set in a post apocalyptic future that has generated some buzz because it's a resurrection of a canceled early-80s Leiji Matsumoto project.

Although the beginning narration doesn't sound fun AT ALL, this show is rather more upbeat than its grim premise would suggest.

This show has a decidedly retro feel.. It's not just Matsumoto's distinctive art style, which is evident both in the characters and the very retro-futuristic mechanical designs, the story is a a throwback in a lot of ways with the dystopic 'future in a desert' so prevalent in the 80's.


In other ways the times have caught up to Matsumoto. He has generally had strong women to compliment his male leads and this series is no exception. Despite the grim backdrop, the characters are pretty likable, even admirable. The show has a somewhat whimsical, occasionally upbeat feel to it as well.

The OP sounds like...my God it sounds like it was translated from Japanese to English to fit the rhythm...(Like several US dubs in the 80's). I feel I should be watching this on a UHF channel in the late afternoon or at, like, six in the morning.

This is actually kind of brilliant!

Two episodes in, things are proceeding at a very decent pace. The story is actually engaging and seems to have a bit of depth to it. I'm really liking it thus far.

A quick collection of spoilers from episode 1 are below the fold.

Our hero is one Sam Coyen (Cohen?) and we are introduced to him as he rides his 80's future hoverbike across the sea of sand, with the intention of catching a "sand whale". 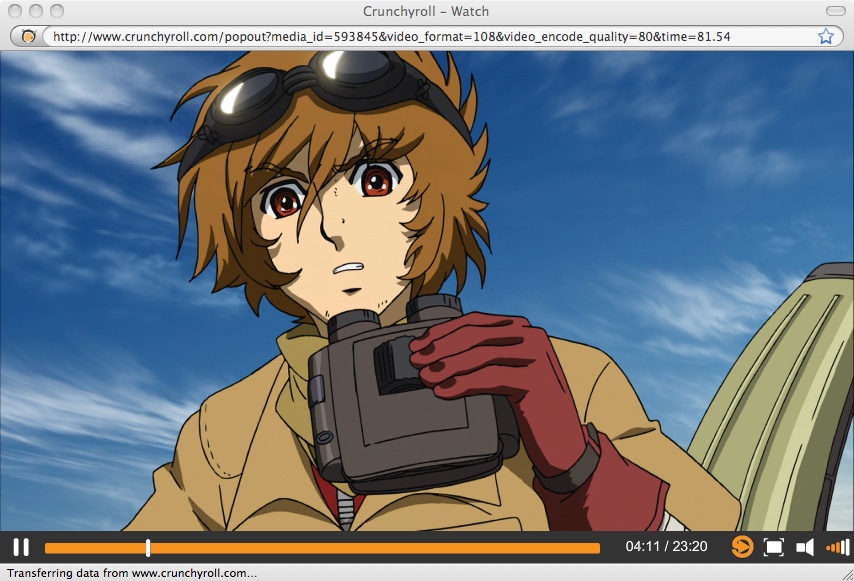 While doing this he witnesses several "sand destroyers" from the nation of Theseus pursuing someone on a (sand) sailboard.  They are attempting to get the sailboard to heave to via the straightforwarrd method of firing laser cannons at it. Naturally our hero decides it is advisable to render assistance. 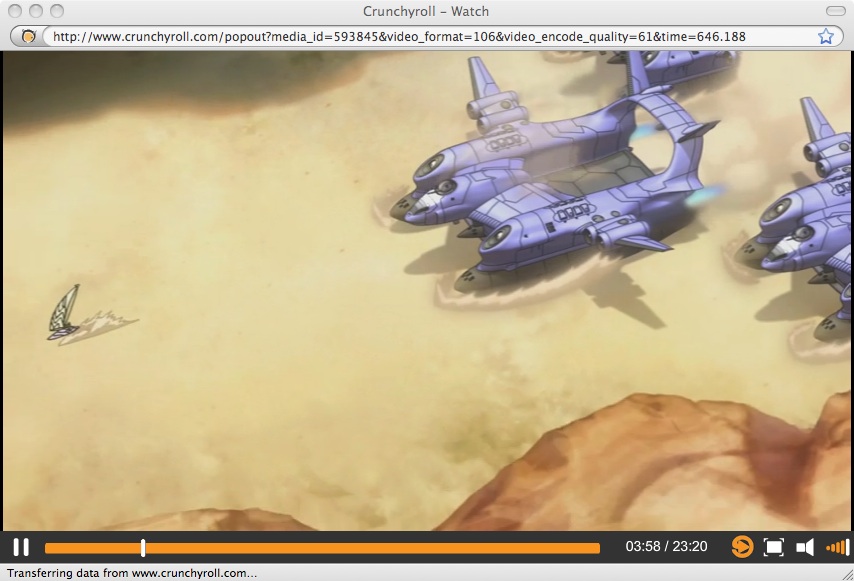 At this point, the sand whale he has been persuing broaches momentarily in front of the destroyers, disrupting their formation, destroys the sailboard and generally throws the whole state of affairs into spectacular confusion. Sam  uses the brief sand cloud as cover to rescue the pilot of the sailboard and speeds away undetected. The destroyers, convinced that their quarry has been eaten, leave. 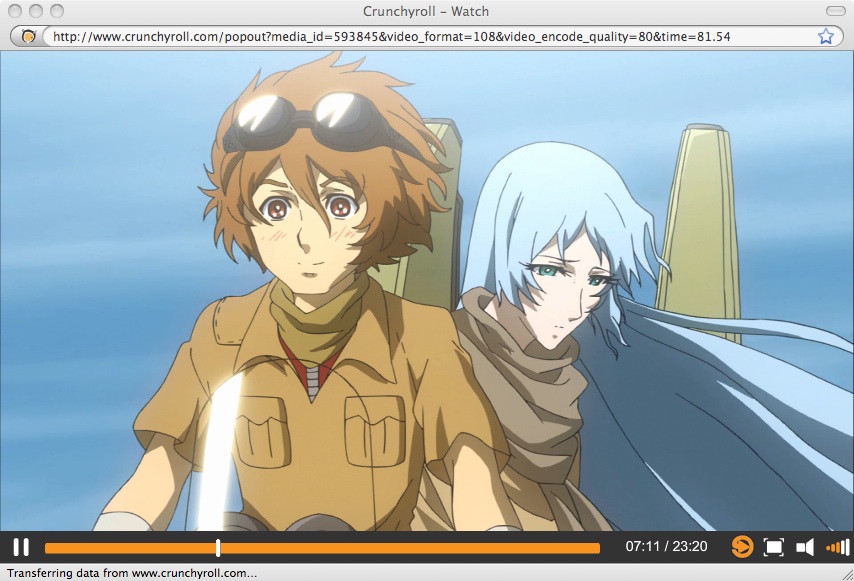 After some self flagellation over loosing the whale, Sam learns that his rescuees name is Maya and offers to take her out to eat, revealing that he knows the best place to eat in the whole wasteland.  He takes her to  a nearby oasis town. 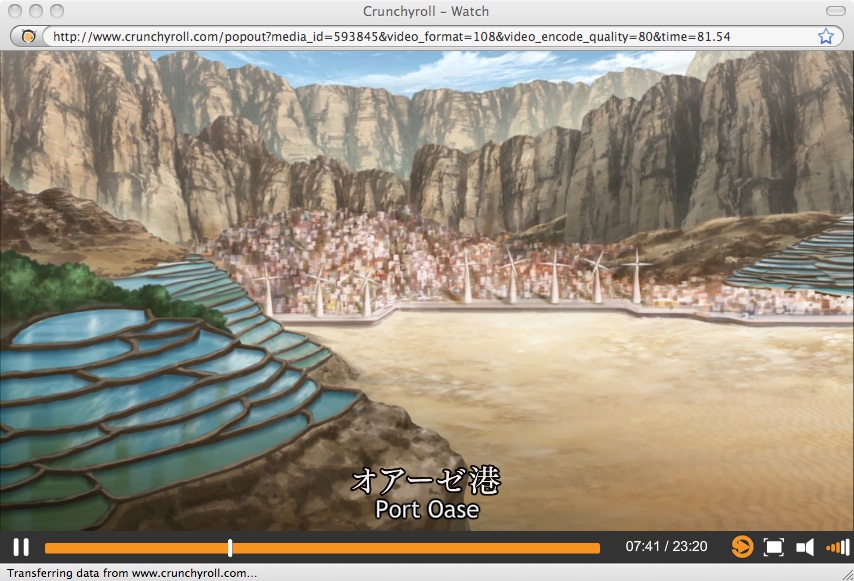 The great little bistro turns out to be the galley on the Bardanos, a sandship that is currently moored there. 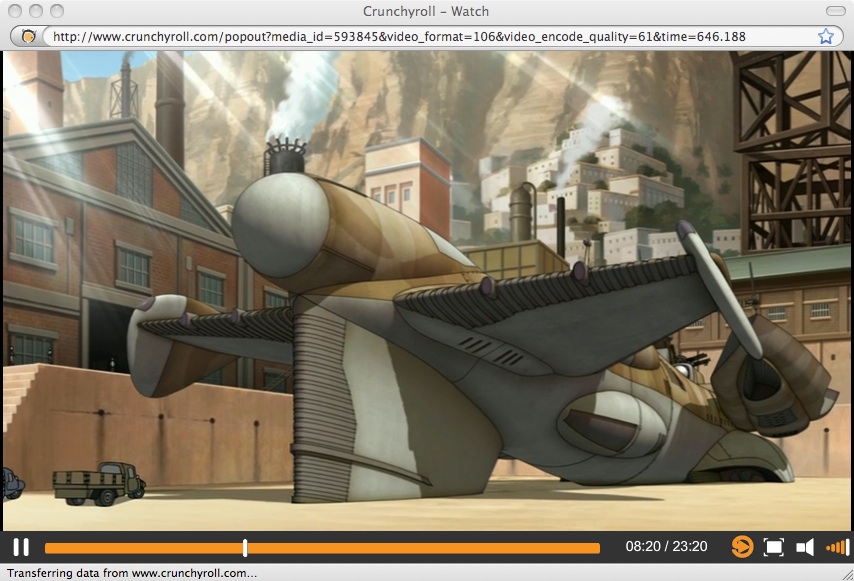 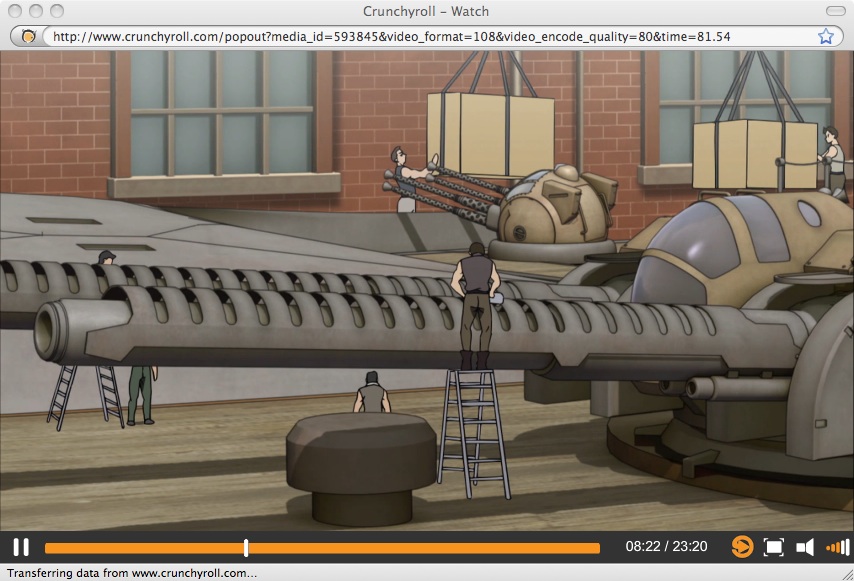 Sam, it seems, is a recent addition to the crew and although he is well liked, he has apparently developed a reputation for bringing trouble with him.

The viewer at this point learns that Sam has a girlfriend... or at least a female suitor, Mimay, who is very interested in whothehelldatis on the back of Sams bike. 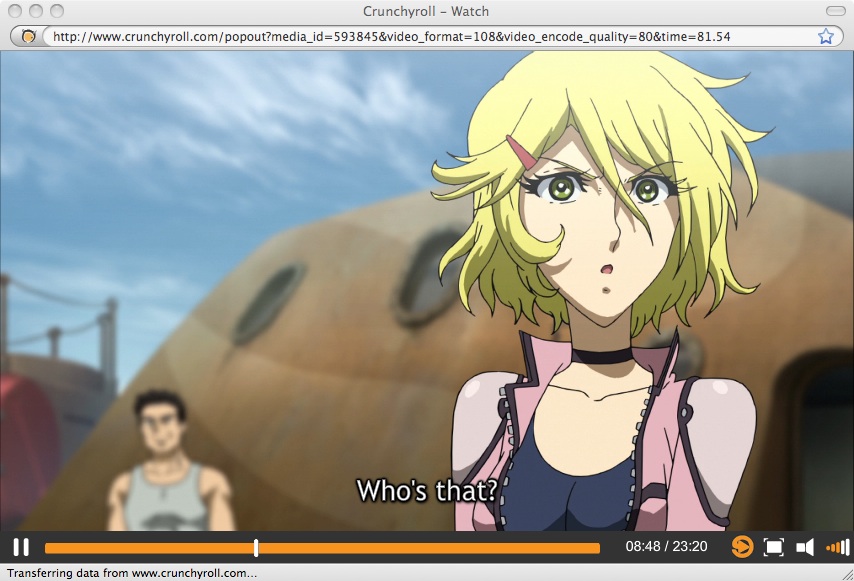 Sam makes straight for the galley where the crew seems to not have any of Matsumoto's trademark potato people. 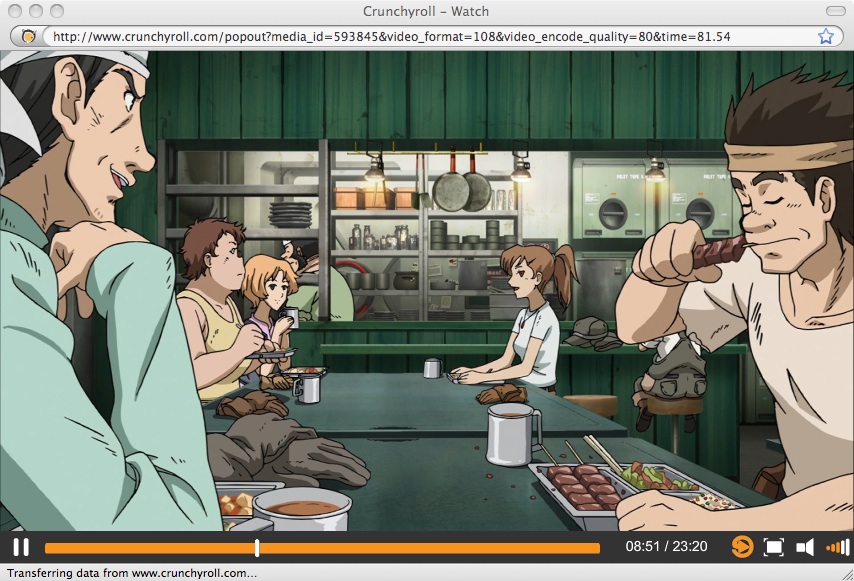 They do seem surprised at the particular variety of 'trouble' Sam has brought back this time. 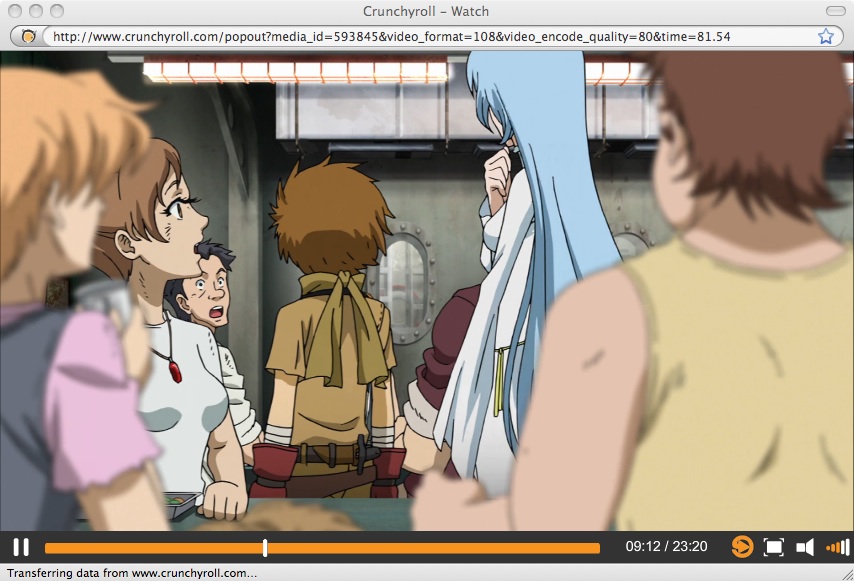 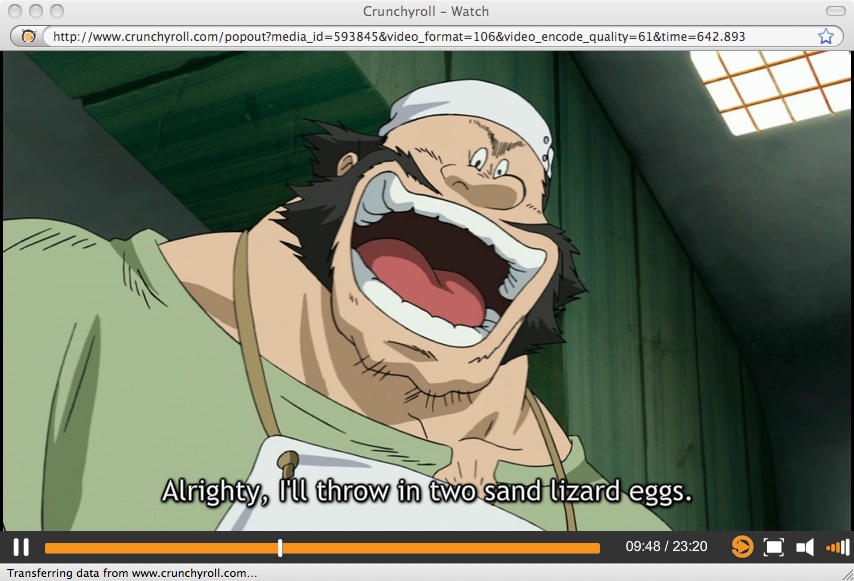 Well, the cook seems to be on T.A.D. from the Tezukaverse... 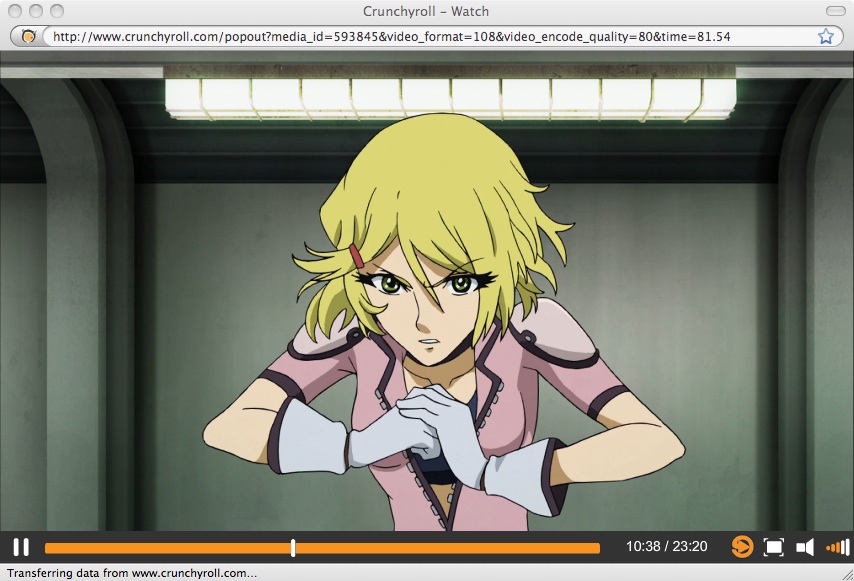 However, her tone changes immediately when she notices that Maya is actually wounded and is beginning to bleed trough her dress. 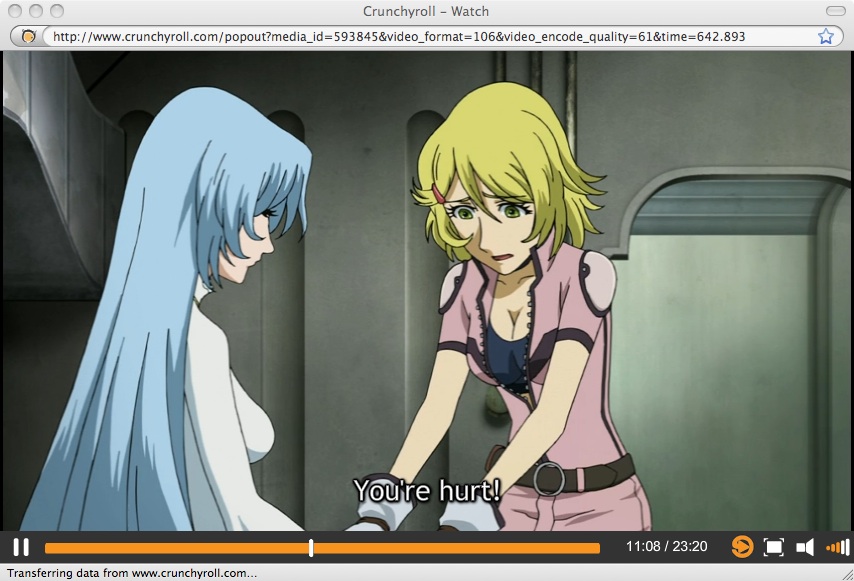 This precipitates a quick trip to sickbay, where the ships surgeon patches her up. Then, being a doctor in a Matsumoto story, the surgeon naturally procedes to scarf down a whole glass of the grain alcohol she was using as a disinfectant. 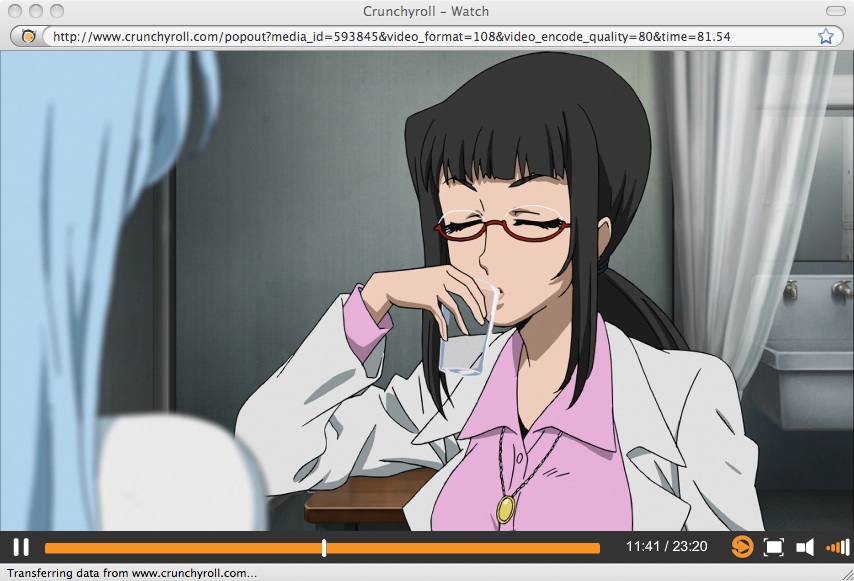 Sam and Minmay report to Captain Bainasu, who is consulting Tarot cards while they explain everything. She does not like what she sees. 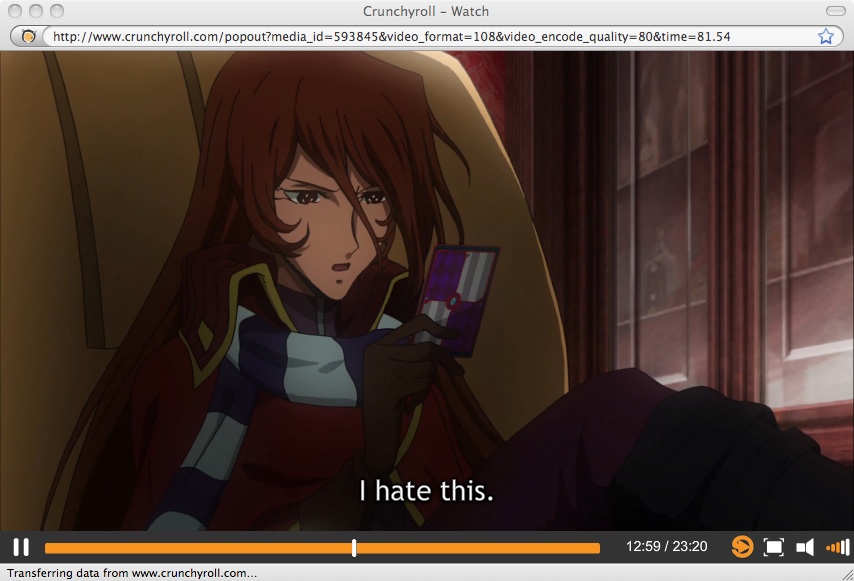 At this point the previously mentioned destroyer squadron zips into the "harbor" and disgorges tanks and troops. They demand the return of "the woman we're looking for". Captain Bainasu refuses . It is implied that the presence of the Thesean destroyers here is a violation of some treaty or other. While these completely unproductive discussions are going on Maya emerges and offers to have herself turned over...there is no way for the BARDANOS to escape and she does not want the crew or the townspeople to suffer. 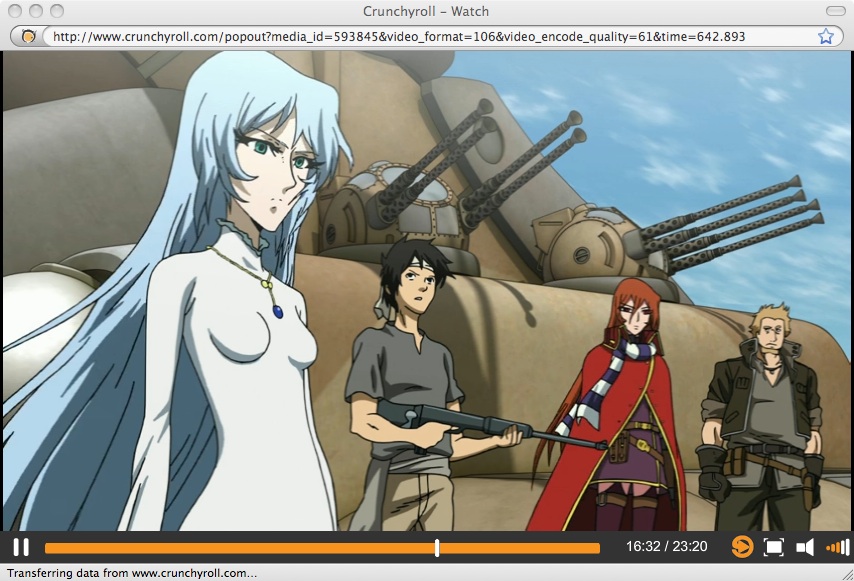 This moves Captain Bainisu almost to tears. She decides that Maya is worth going out on a limb for has everyone hustle their new charge inside and breaks off negotiations. Her XO seems to disapprove but is resigned to this sort of thing. 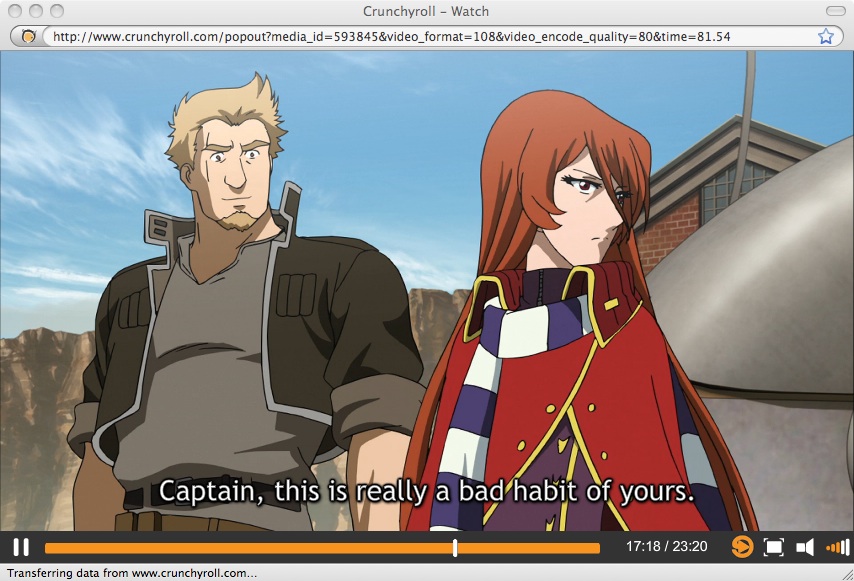 The CO of the destroyer squadron seems to hold Maya in considerable regard and agonizes over the decision, but after a moments hesitation orders his men to fire.

Because this is retro sci-fi, their rifles shoot LAAAYYYZERS!

Bainisu orders the engine room to spin up the engine and the chief engineer... 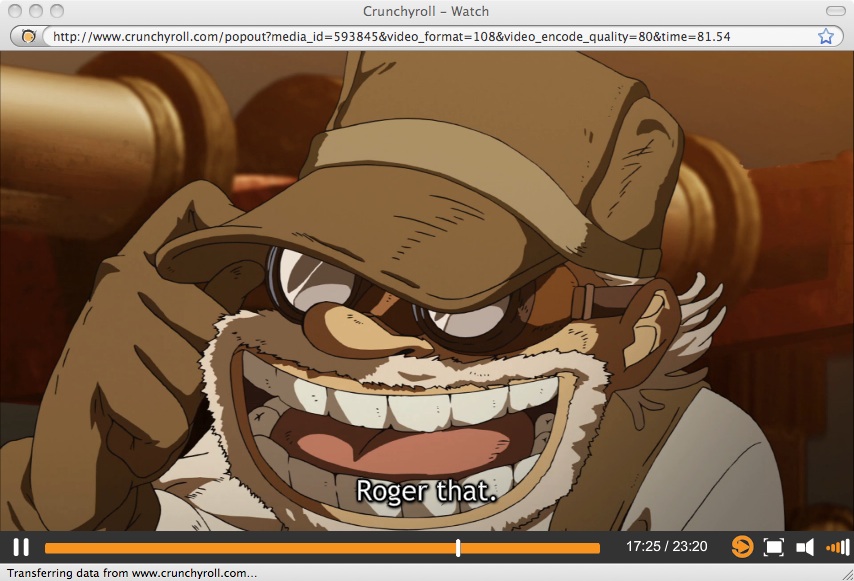 OH! Finally. a POTATO PERSON!...(we are cooking with gas!)

The engines destabilize the sand around the ships and the Theseus landing party begins to sink into the sand. Refreshingly, The CO of the enemy squadron refuses to fire until his men are safe and out of the line of fire...he appears to not be a raving sociopath. He also wears a mask in keeping with late 70s early 80's villain fashion. 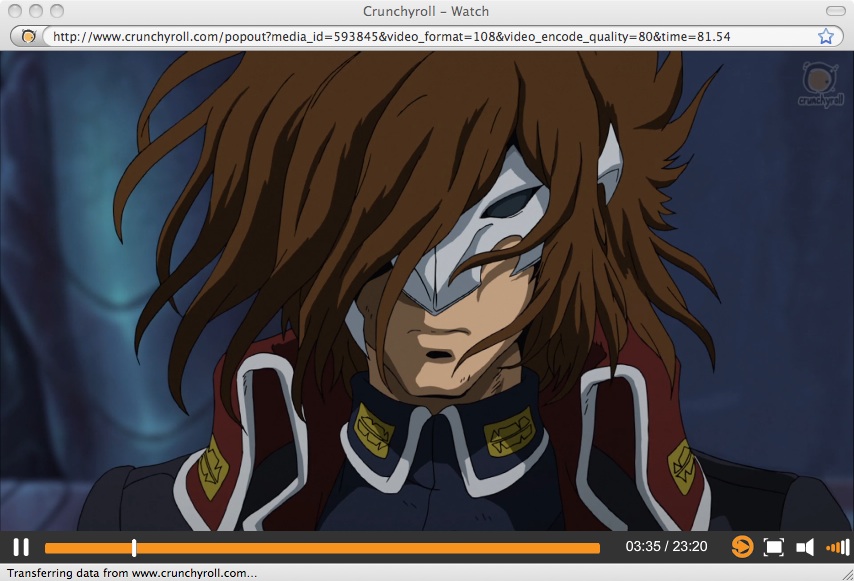 Of course, the Bardanos cannot escape the harbor and is out numbered 3 to one by full on warships so there is no reason to worry anyway. He
orders his main battery to disable the Bardanos's engines and.... 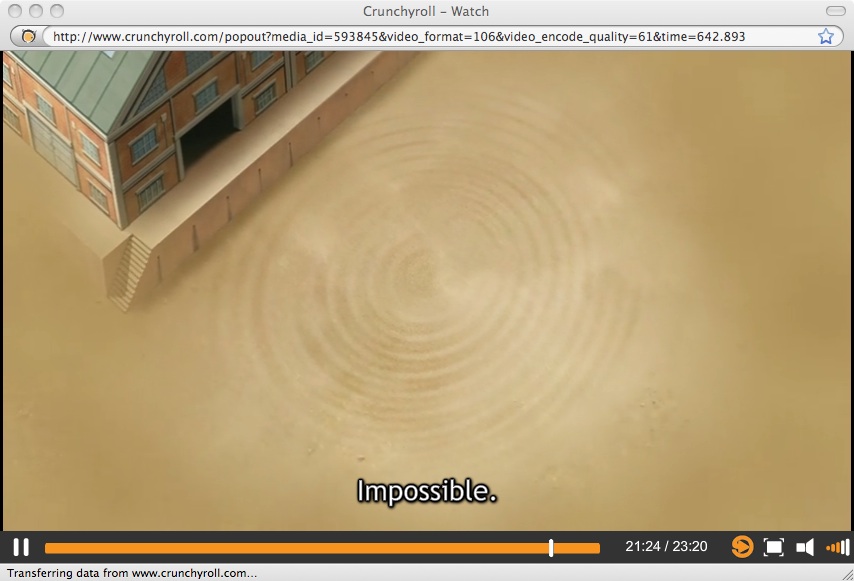 One of the Thesean bridgebunnies detects quantum something something passing out of the harbor. It seems that Bardanos has a quantum sand widget that allows it to destabilize the sand around itself and move through sand like a submarine. The enemy captain is surprised that Northern peoples have this ability, but...the natural predator of the submarine is the destroyer....

1 Maya reminds me of a sort of ugly Princess Starsha, and those sand destroyers, with the stubby wings and multiple jet engines, remind me of ekranoplans.

2 Muppet, have you heard anything about a new Ga-Rei anime?  I'm picking up odd little rumors here and there about... something, but nothing I can nail down.  You unnerstan Japanese, maybe you can find something?

Muppet, have you heard anything about a new Ga-Reianime?  I'm picking up odd little rumors here and there about... something, but nothing I can nail down.  You unnerstan Japanese, maybe you can find something?