Occassionally, There is a Reward for Clean Living For example...in the latest episode of GATE, our heroes do not die at this point. 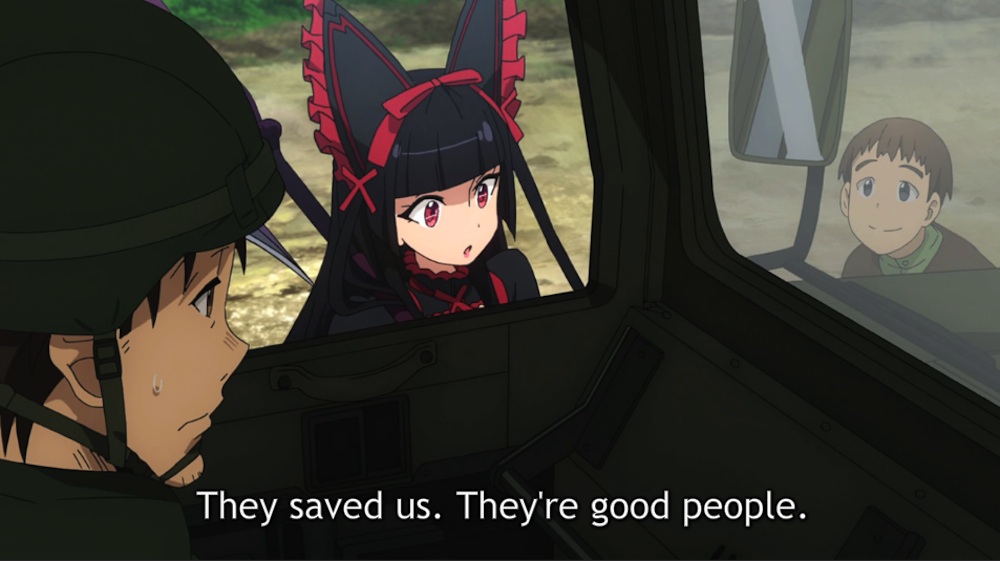 "Wait...did you say GOOD?"
You see, the Elegant Gothic Lolita (Catgirl?) is" Roary Mercury, Apostle to the Dark god Emloy" which apparently means that she is some sort of priestess. What is certain is that she is a person with considerable ability that is at this point indistinguishable from magic. 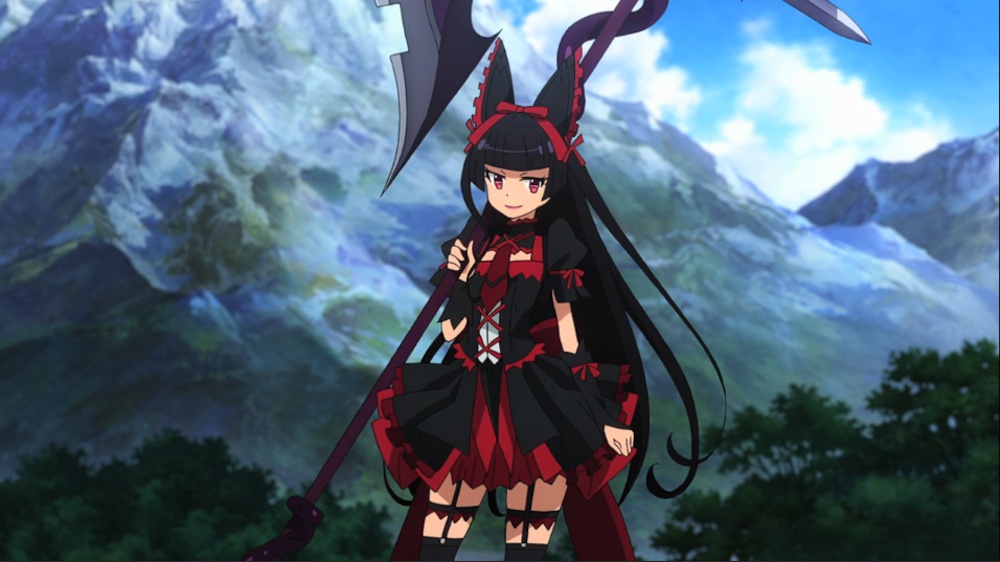 Not pictured: Just HOW ridiculously large her elegant gothic choppy thing is.
When we first meet her she confronts several dozen brigands who she proceeds to slice, dice and circumcise. It is quite obvious by the end of the episode that she could have killed Itami and his entire command without breaking a sweat. Indeed, that was probably her initial intent, but to her surprise, she discovers that this small detachment of the interlopers who have curb-stomped every army sent to destroy them have not been raping, looting and pillaging, but rather have been rendering aid to commoners without regard to ethnicity and that they are in possession of carts that move without horses.
Nor is Mercury the only character possessed of unusual ability. Leili, the blue haired young lady is an apprentice to the fellow in the wizard hat, who is named Kato, and is, shockingly enough, a Wizard. 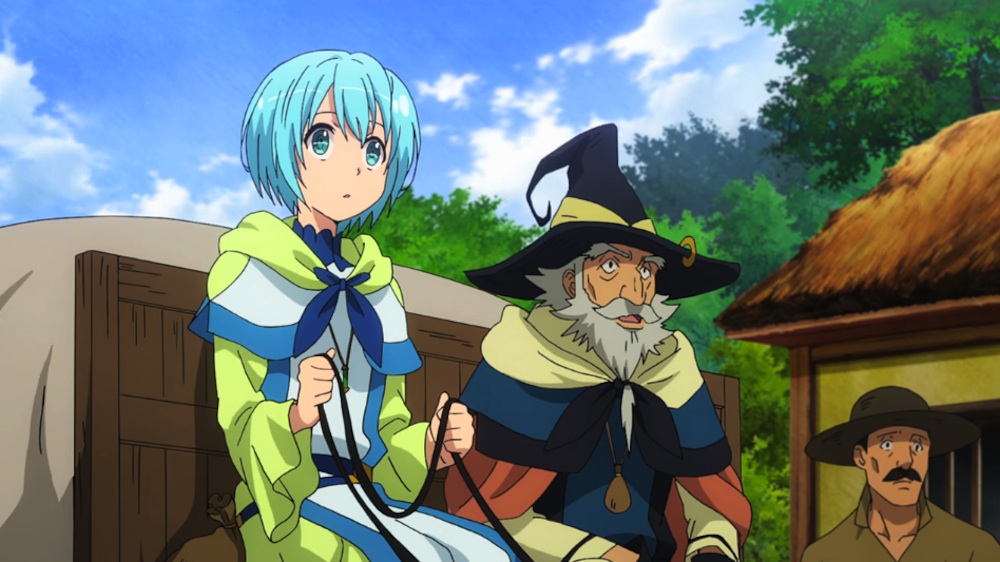 The Force is STRONG with her.
The JGSDF unit has taken a detour from reconnoitering to help evacuate a village that is being menaced by the dragon that they saw razing the town in the last episode. In this episode we learn that there was but one survivor of that unfortunate town, an elven woman who speaks elvish. While this is not, upon reflection, surprising, it should be noted that the extemporized phrase books they are using don't contain any elvish. 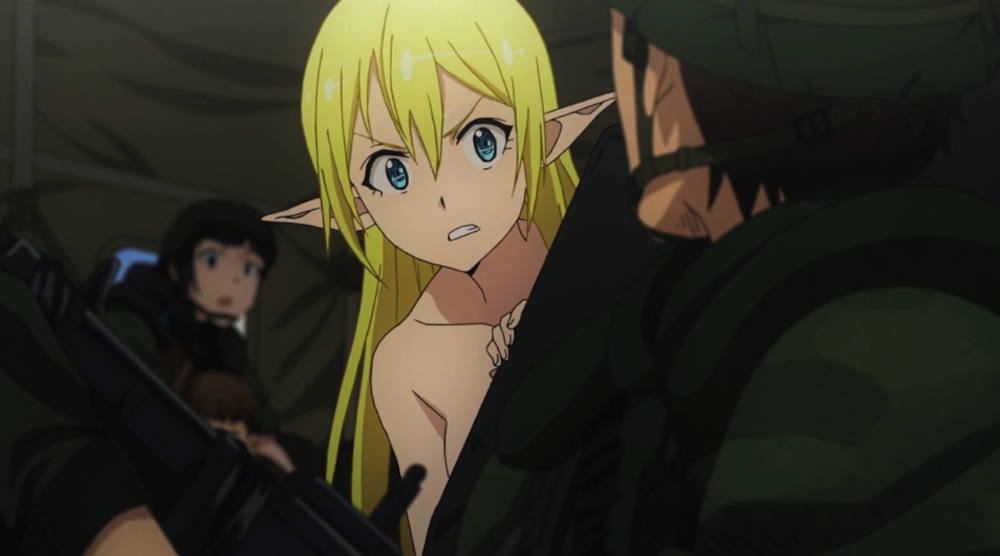 This is unfortunate as the young lady has very useful information to share.
This is an intelligent, well thought out show, and despite the abattoir aspect of the last episode, it is proving to be both suspenseful and upbeat.
Lt. Itami is is a genuinely likable hero. Having been a brevet commission he has a greater hurdle than most to earn his troops confidence, especially since his hobbies are known and held in low regard by his medic and senior NCO. Nevertheless he proves quite capable as a leader and demonstrates considerable decency complimenting his tactical verve.
This episode was fast paced, introducing several new intriguing characters and was quite thoroughly satisfying This is in contrast to the previous encounters with dragons were not really satisfying from a dramatic perspective, but they were realistically handled and set the stage for this...

Our heroes when finally confronted with the pesky dragon engage it without protest...after all there are traditions to uphold.... 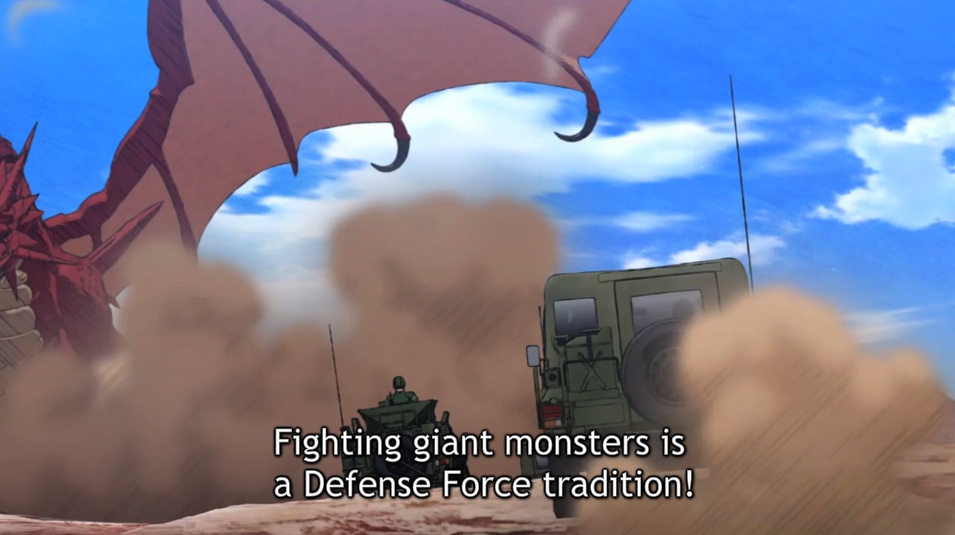 Alas, the cinematic tradition is not a glorious one and this is rather in keeping with that because this dragon is not like the others, it is...

OH MY GOD IT IS SMAUG!

This beast is hundreds of feet across, It is bullet proof, cannon proof and highly resistant to bazookas. It also breathes fire like the proper dragon that it is.


In short, it is a fricking kaiju and nowhere in our heroes inventory are any Markalites or oxygen destroyers, so the battle does not go well...until they get some tactical advice from the elf via pantomime and have their attacks augmented by the aforementioned goth-loli blood knight who they had fortuitously succeeded in amusing rather than pissing off.

Nevertheless, it is a near run thing and they only barely succeed in driving off (but not killing) the dragon which manages to kill several civilians in the convoy they were escorting.  The result is that they end up gaining an excellent reputation but are saddled with a bunch of old people and orphans to care for...   . 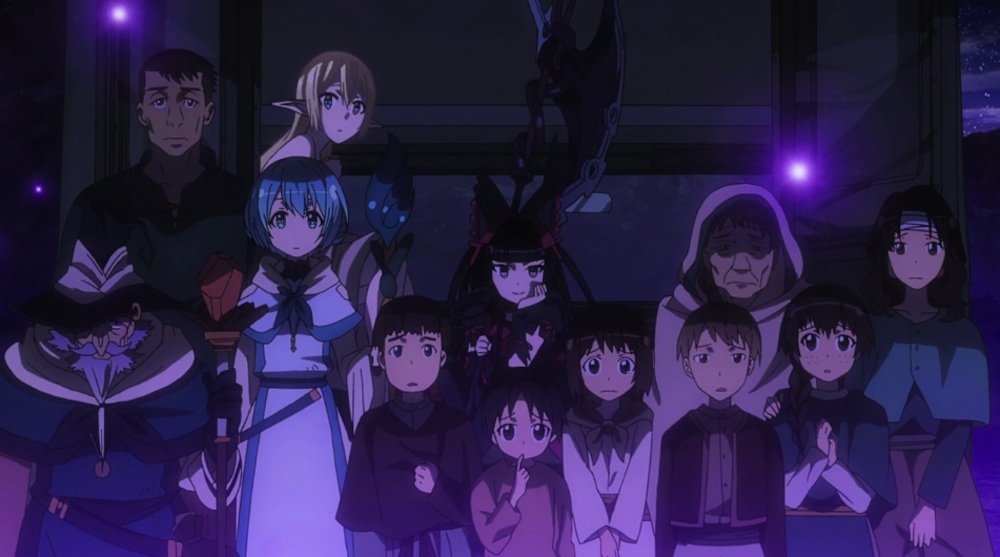 Certainly not the darkest and grittiest of entourages.
The cast members introduced in this episode add a nice bit of wackiness and whimsy. Despite much potential for stupidity and squalor the show remains quite smart and engaging. This is a very impressive show thus far, my biggest complaint at the moment is that the next episode is a week away.

1 I don't normally do this, but I've hidden the previous comment for now, because I suspect the involvement of alcohol in its composition and fear that, despite the low traffic of this blog, it might go viral...in which case, someone's basement could become their tomb.