1 There's no single "wow" moment in this trailer that equals the "X-Wing flyby over a lake" shot from the first.

That being said, this one gets me a lot more geeked up for the movie.  "Chewie, we're home" indeed.

2 In canon terms, how much time has passed between ep 6 and the upcoming ep 7?

3 I don't think they've said yet, but if we assume the woman in this trailer is Luke's daughter, ~20 years seems a reasonable first guess.
Before Disney nuked the EU, the storyline of the books went out 35-40 years.  Luke had a son, and Leia and Han had three children, two of whom died.

4 And yet, the Empire is still flying exactly the same fighters? I can understand the rebellion being stuck with old equipment, but why hasn't the Empire upgraded?

5 The F-16 started flying 40 years ago and they are getting around to build a replacement only now. Aaaand... The replacement is over budget and is slow in coming.

6 This came across the wires this morning: Matthew McConaughey reacts to the new Star Wars trailer.

Steven, there were other TIE fighters in IV, V and VI.  The TIE Advanced x1 was the type used by Darth Vader at the end of A New Hope.  In the Extended Universe, with shields, a hyperdrive, and a vastly expanded sensor and electronics suite, it was hideously expensive and thus few were made.

The TIE/Interceptor was seen in Return of the Jedi.  Much faster and heavily armed than the standard TIE fighter, it was still unshielded and unarmored.  If the TIE was the MiG-17, a TIE/In would be the MiG-25.

The TIE Bomber was seen in The Empire Strikes Back.  It was a strike craft, capable of carrying missiles, bombs or torpedoes, all of which were usable against either surface or space targets.  If I remember correctly, in the TIE Fighter videogame a single bomb was capable of killing a Rebel Frigate.

Since the X-Wing seen in the trailers is an new version over the ones in the movies (check out how the wings split!), if nothing else I'm willing to bet that its safe to assume the basic TIE design has been upgraded in some way over the years.

7 Neither the Empire (if that is what the bad guys still call themselves) or the Republic are flying the same craft.  Sure, they're still TIE fighters and X-Wings, but there are differences.  Most notably, the TIE fighters now have light colored panels, and the engine nacelles of the X-Wings are angular instead of round.   There are other subtle visual differences, all of which can be inferred to represent internal upgrades.
Given that both craft were of relatively recent design (neither existed in the prequels, just a couple of decades before the original trilogy), it makes sense that they would get upgraded rather than replaced in that time frame.  Especially if the Republic is spending it's resources fixing things, and the Empire has been isolated from it's main production and R&D facilities.

8 Wonderduck said "There's no single "wow" moment in this trailer that equals the "X-Wing flyby over a lake" shot from the first."
I have to disagree.  That shot of the crashed Imperial Star Destroyer on a desert planet was pretty darn amazing.  Possibly the first time in the whole series where you get a proper sense of scale on those things.

9 Damnit, people, quit getting my hopes up.  I gave up on new Star Wars properties years ago.

Nobody said you had to agree with me.  People disagree with me all the time.  They're all just wrong.

11 But would you feel the same if the trailer featured, say, a duck?

13 And suddenly I have a mental image of Howard the Duck with a lightsaber.  Anyone know where I can find the economy sized brain bleach?

14 That's not just a mental image. I remember the old Marvel ads in the old Marvel Star Wars comics, and they did indeed have a picture of Howard the Duck with a lightsaber, and a woman from his comic in Leia's pose from the original movie poster.

15 David, is this what you were trying to avoid at all costs? 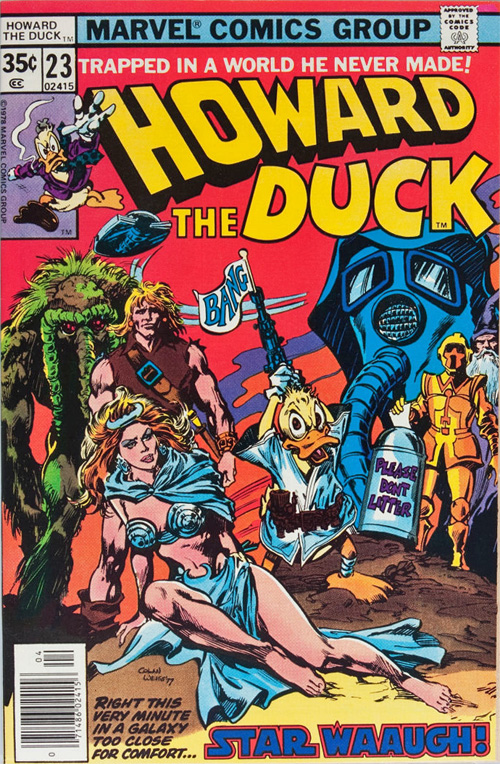 But I see that I confabulated the lightsaber....

18 I have some of those.  Wonder if they're worth anything?

(And I never entirely understood the tagline on that comic).