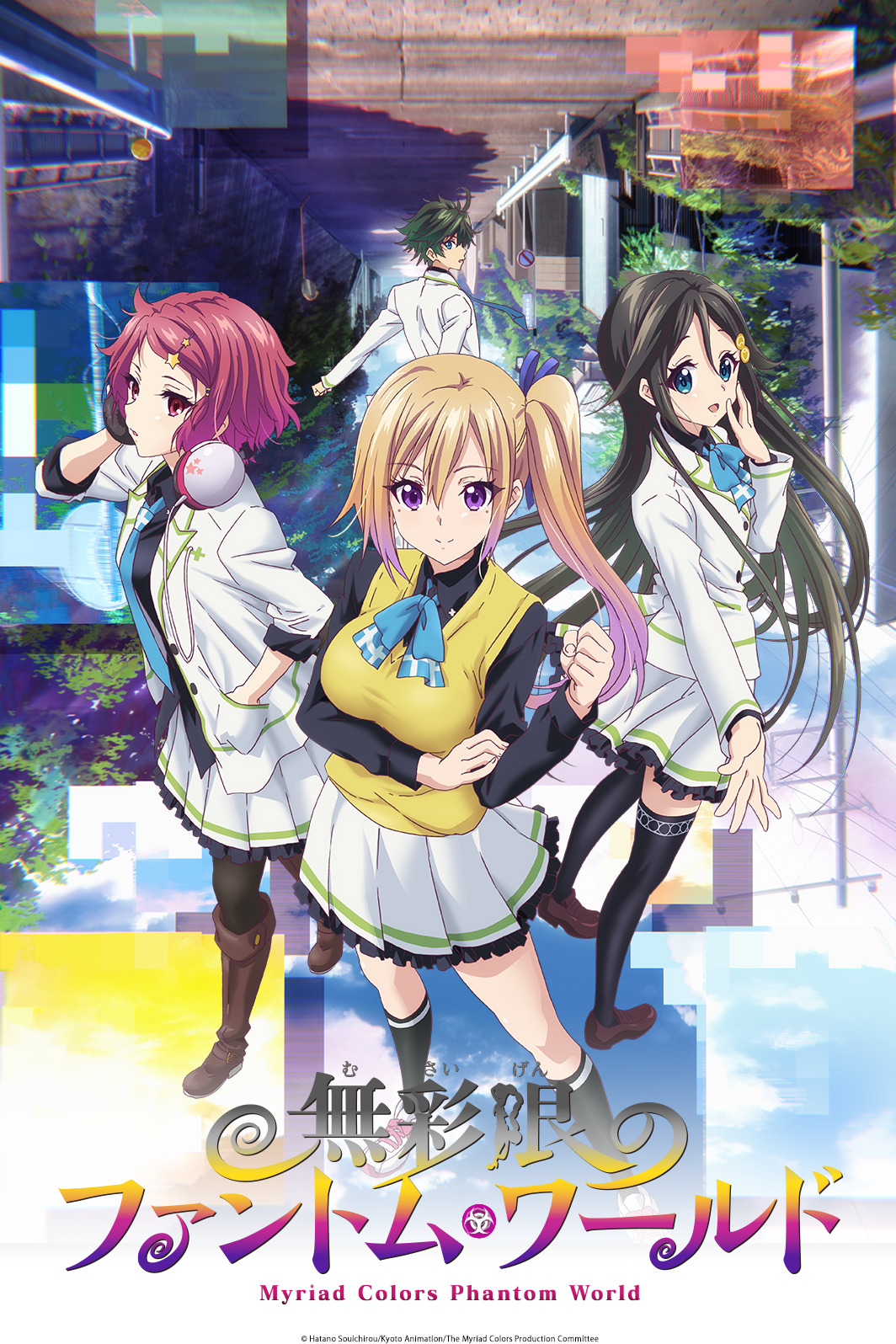 We have a show about high-school students who have part time jobs as superheroes and whose rapidly growing team has only one guy in it.
No..no...that's not what's surprising as that has pretty much become the default format for getting green-lit nowadays. No, the surprise is that this one appears to be good.
It's certainly tries to be smarter than most.
The premise is that some years ago a terrorist attack on a research facility run by a certain Alayashki corporation released a virus that allowed humans to perceive the supernatural stuff that has always been around (maybe: there is some ambiguity on the chicken to egg aspect of this). These phantoms and such caused considerable mischief until the first generation of children born to those exposed to the virus began coming of age. It seems that some of them have various abilities that allow them to deal with this new annoyance to varying degrees. Since this is a recent phenomenon, very few people with this ability are adults yet, so high schools, especially those that cater to students with these talents have set up clubs that have teams which do exorcisms and such as community service (in addition to their school work).  Due to restrictive child labor laws they are paid in goods and services rather than cash.
At the wrong end of the effectiveness bell curve there are these two goofballs... 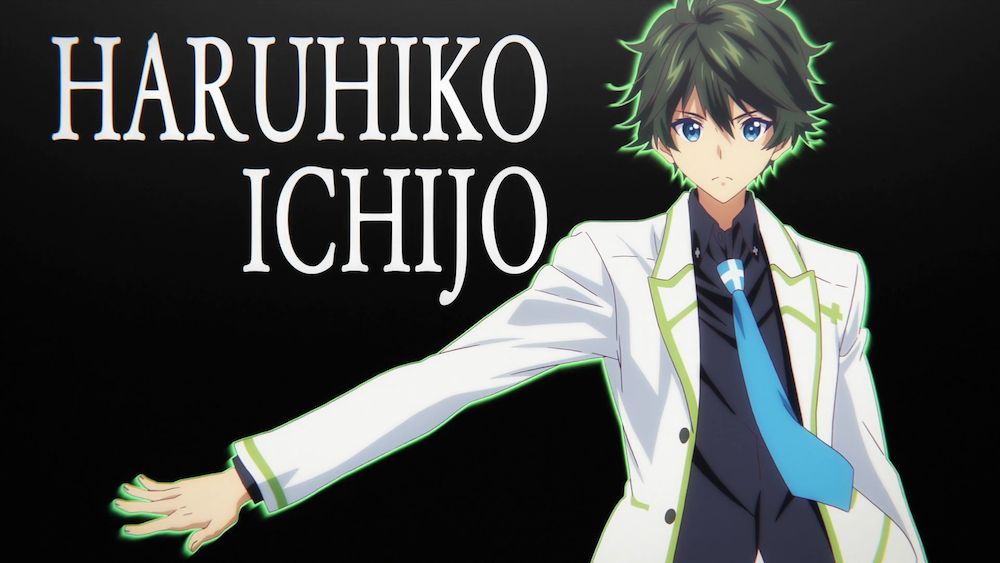 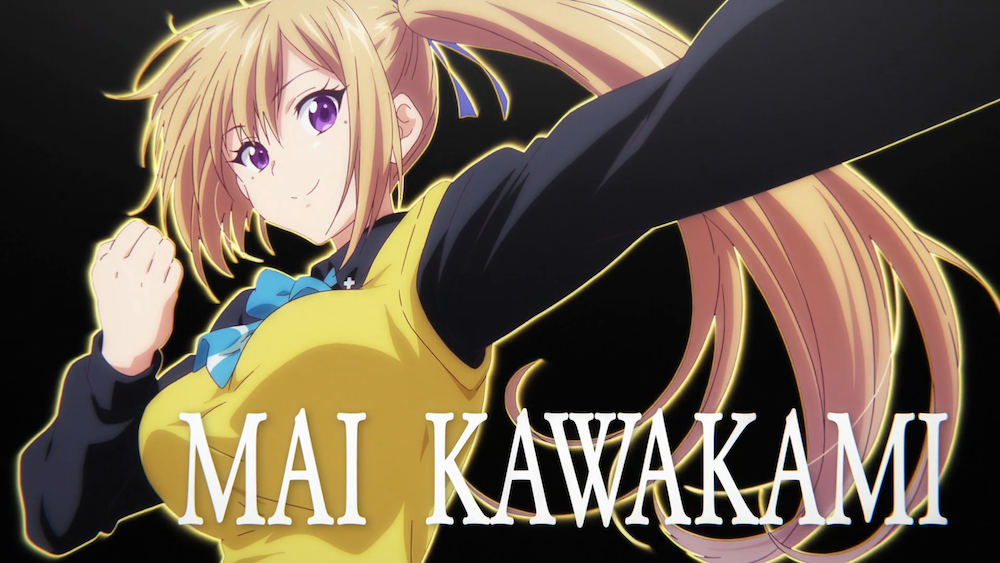 Haruhiko is bookish and not particularly athletic, but he is quite smart. He has the ability to seal away a supernatural entity in a drawing provided he has time to draw it and it can be brought into range. Mai is a top notch athlete who is proficient in martial arts and applied fluid dynamics. She has the ability to use elemental powers, the activation of which is rather fascinating. Her abilities are not particularly powerful and she must use her wits and stamina in order to buy Haruhiko time to...slowly....draw whatever monster they are fighting and set it up to be consumed by his painting.
This strategy has not led to great success and the two are considered a rather gimp team and something of a laughing stock. They try in vain to acquire talent until Haruhiko persuades... 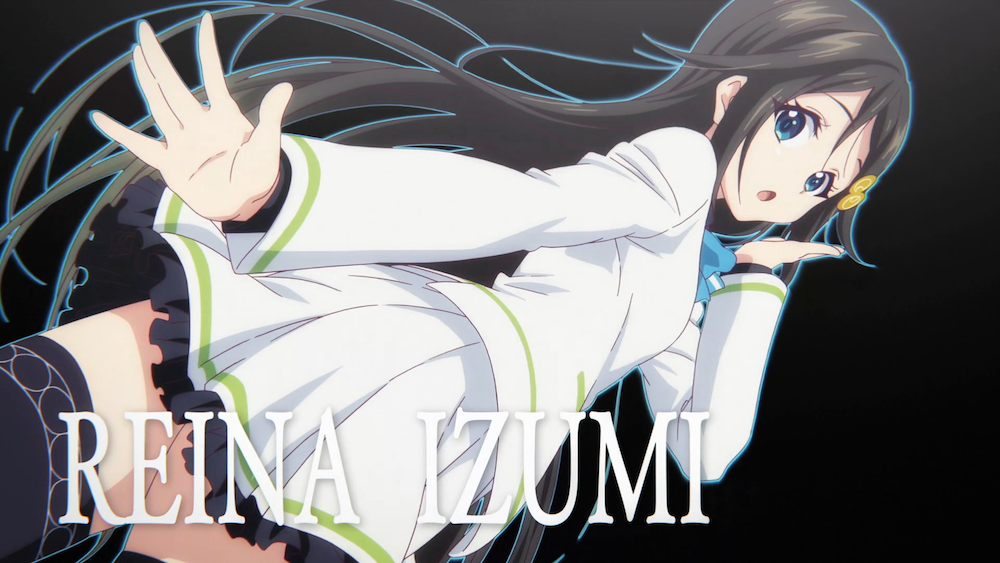 ...to join their group. She has the unnatural ability to EAT spirits without having to draw them and often without the need to have them positioned 'just so'...thus our male lead is pretty much superfluous at this point, or would be if having the two girls fire him would not play into the fears and insecurities of the target demographic.
Fortunately he has one other super-power. The best bedroom EVAH.
No...No...it's not THAT sort of show...er...Allow me to explain... 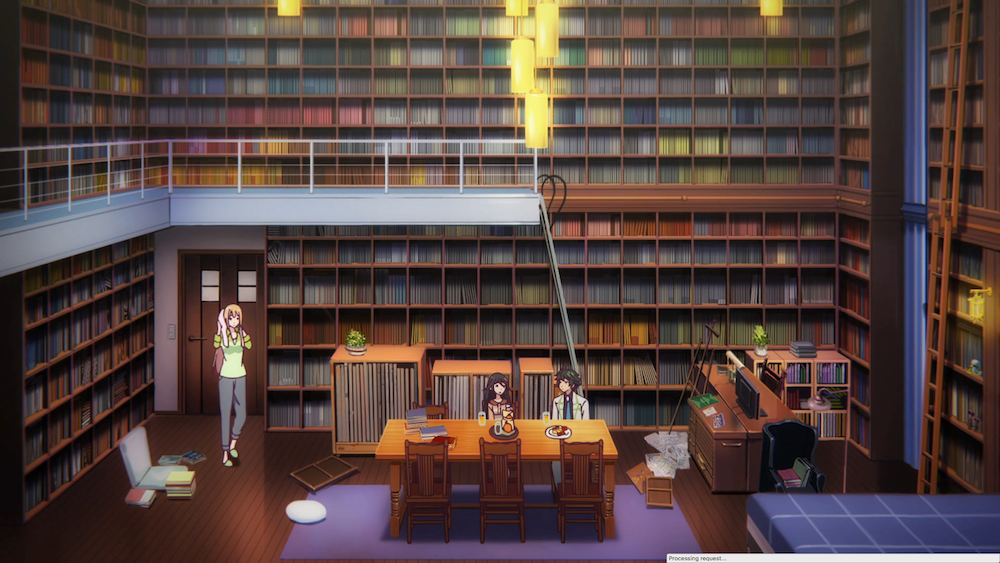 He has an awesome library and the brains to use it. He is working hard to develop his ability to seal away phantoms, into a summoning skill...and he is a vast treasure trove of obscure and occasionally useful knowledge.
Haruhiko also has a cute genie-like entity that hangs out with him for reasons not quite clear. Her name is shortened to Ruru (Lulu?) for the sanity of laypeople and she seems to have no particularly impressive abilities aside from being 12 inches tall and being able to fly. 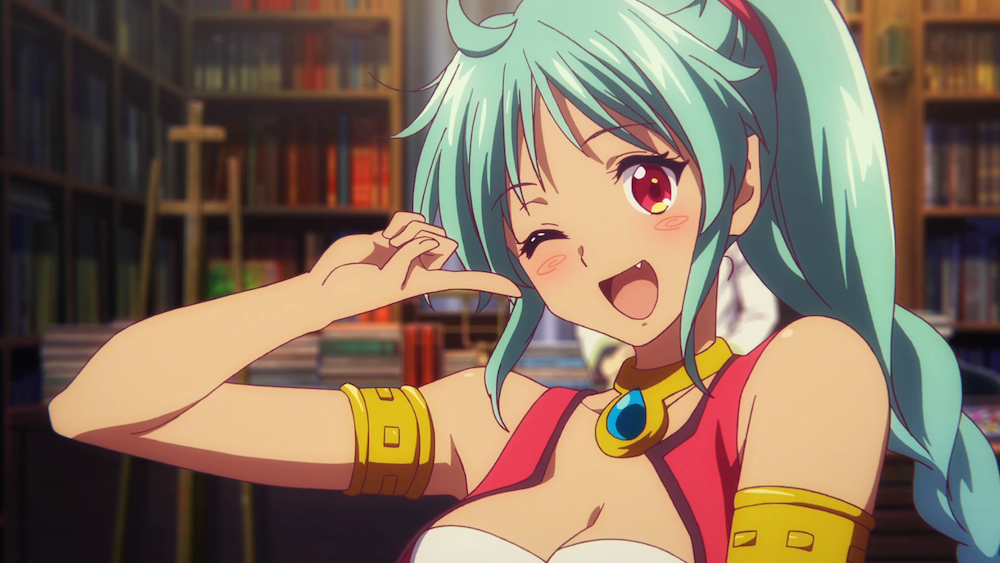 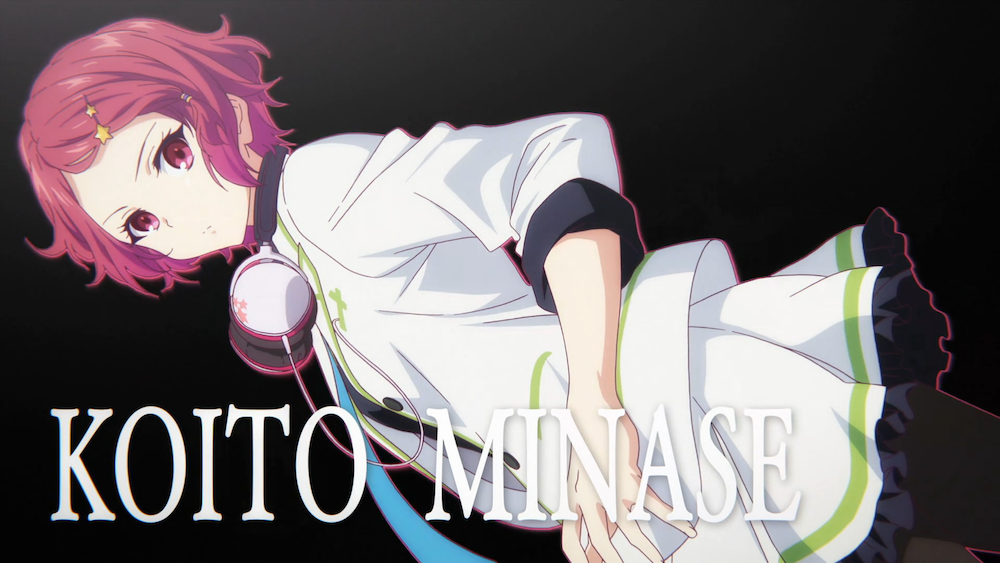 ...who is one of the most powerful people in their school. She works alone and does not particularly care for the goof troop, but they keep crossing paths and tripping on each other.
What saves this series is that it isn't simply the fact that it's not, in actuality, a harem show with regard to its interpersonal relations (at least not yet). It has also been surprisingly pleasant and even clever.
There is a rather large amount of philosophizing  about the nature of reality, and quite a few open questions. On the surface this is a monster of the week show(or more often two separate monsters as its story has tended to be 2 bach to back 12 minute episodes). However every episode throws out one or two hints to other things that are or may be afoot. 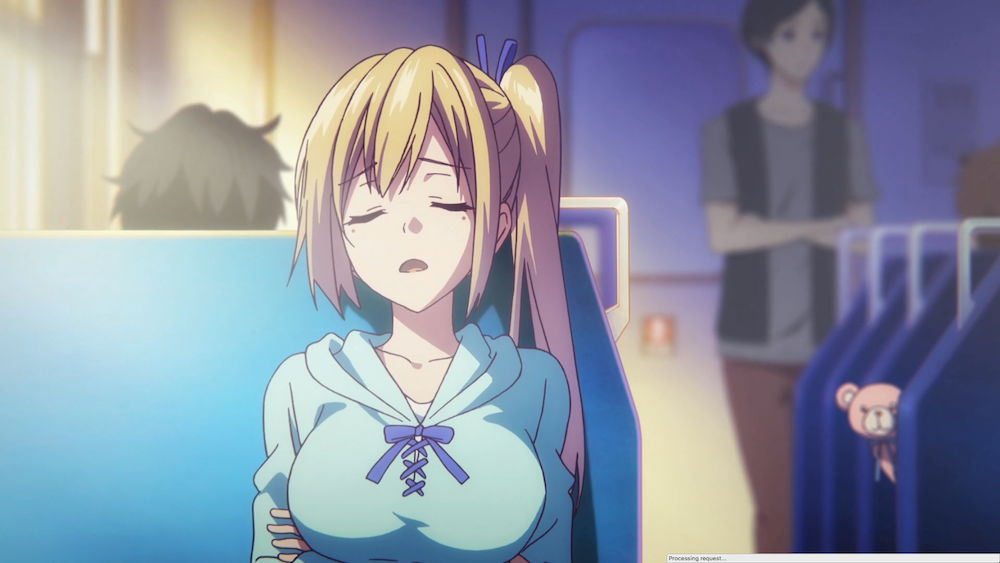 Sinister things indeed...
The show is very well animated and the art is nice. The characters are competently written to boot. The humor runs the gamut, but is occasionally rather broad and physical, mostly at the expense of the dude. I'm enjoying the show as is and am seriously intrigued by the hints that it may be going somewhere rather darker. This is often a tough thing to pull off. The show could easily fall apart, but right now it is fun, engaging and surprisingly smart.
I particularly liked the fact that they deal with training as opposed to knowledge. In the latest episode Haruhiko, at the behest of their faculty advisor manages to access Mai's skill-set. He does NOT however, have the stamina, flexibility, and strength honed by years of disciplined training. He gets curb stomped.....the fact that he also had access to her memories as well has some creepy implications.. These are not explored in depth, but they are not ignored either. The fact that their advisor is a member of Alayashki reasearch staff and wants to publish a paper  on this sketchy experiment is just tossed aside for now.

1 Another huge tease is the loli with the teddy bear.

2 Yeah, there's definitely something going on with Checkov's Loli. I'm beginning to wonder if the Teddy Bear is actually a periscope.