In the Latest Episode of PHOENIX WRIGHT: ACE ATTORNEY Phoenix Wright is contracted to conduct delicate inter-dimensional negotiations while posing as a member of the Foreign Ministry, under an assumed name. 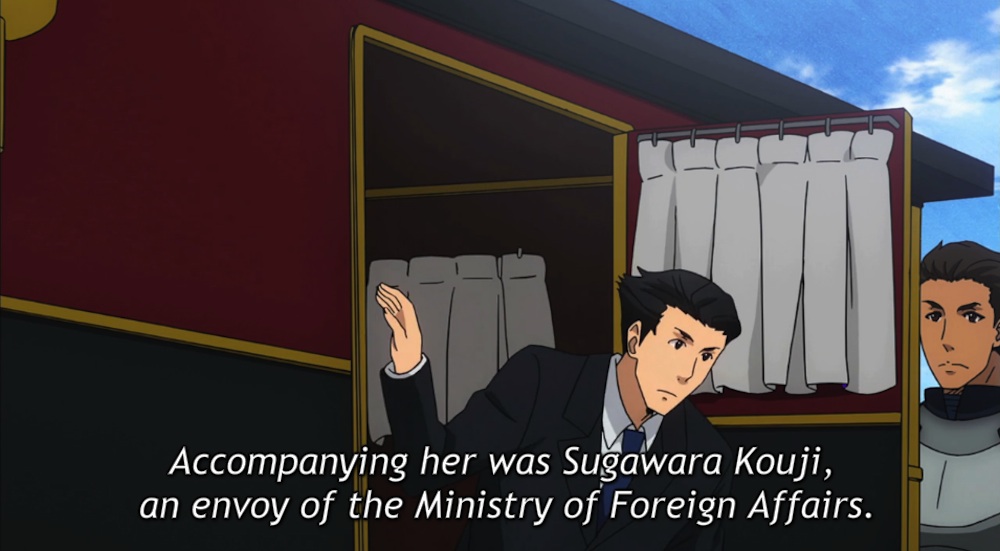 That title and entire first sentence is probably not true...probably.
In actuality, the screen-cap is from Episode 11 of GATE. The previous two episodes left such a foul taste in my mouth that I nearly dropped the show. With episode 11 this series appears to have gotten back on the rails and has gone a long way to cleanse the palette.
More below the fold...
This episode resumes advancing the story in a couple of different directions.
Princess PinÃ£ remains intelligent and sensible. The Princess is a fascinating character being strong, savvy, resourceful and quite believable. However out of her depth she might have been in another world or facing helicopters with horse calvary, she managed to cope and survive by remaining level headed. Now, however, she is in her element, for she has been groomed all her life for court and senate politics. Nevertheless her goals are ambitious in the extreme, and not a little dangerous. 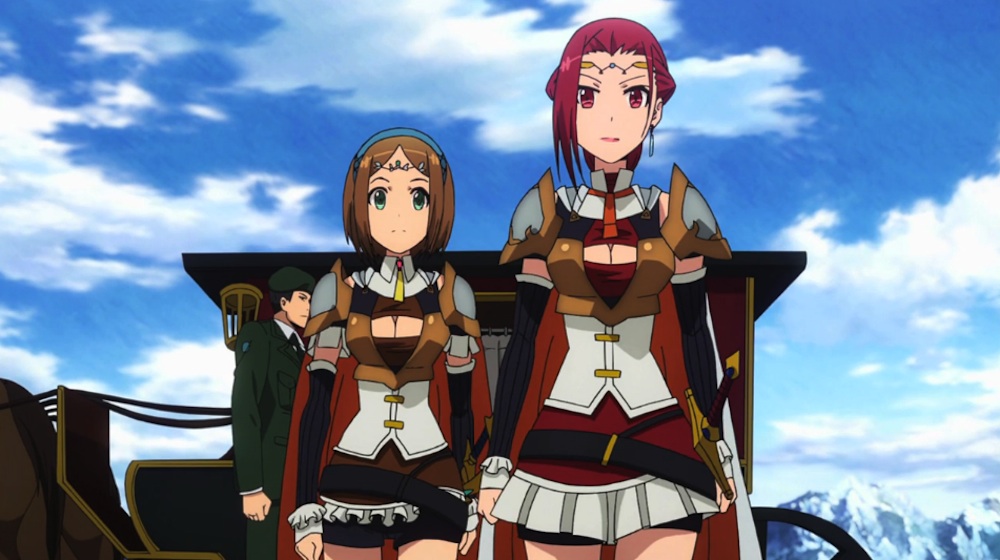 PinÃ£ is working to bring about a peaceful resolution to the war by discretely arranging negotiations with powerful senators and facilitating strategic prisoner exchanges. To that end, she's networking and coalition building in the Imperial Capital. 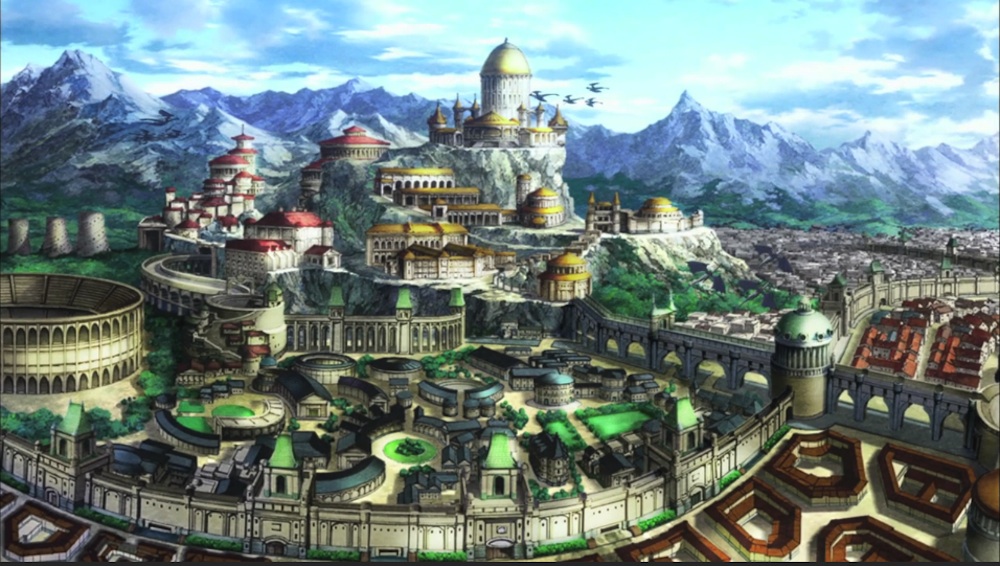 The perfect backdrop for Byzantine intrigues!
Elsewhere...
The Arnus refugee camp has lost a bit of its prefab aesthetic as the locals have started building....rather a lot actually. News of the fact that the people running the place don't really have any preexisting animosities towards any of the local ethnicities seems to have gotten around...
...with predictable results.
This, in combination with the influx of exotic goods through the gate, close proximity to the trading hub of Italica, a large tract of unoccupied land (it was a religious shrine after all) and above all the absolute security provided by the "green people" (JSDF) mean that this desperate huddle of refugees from a diverse cross section of cultures has become something of a boom town in a matter of months. 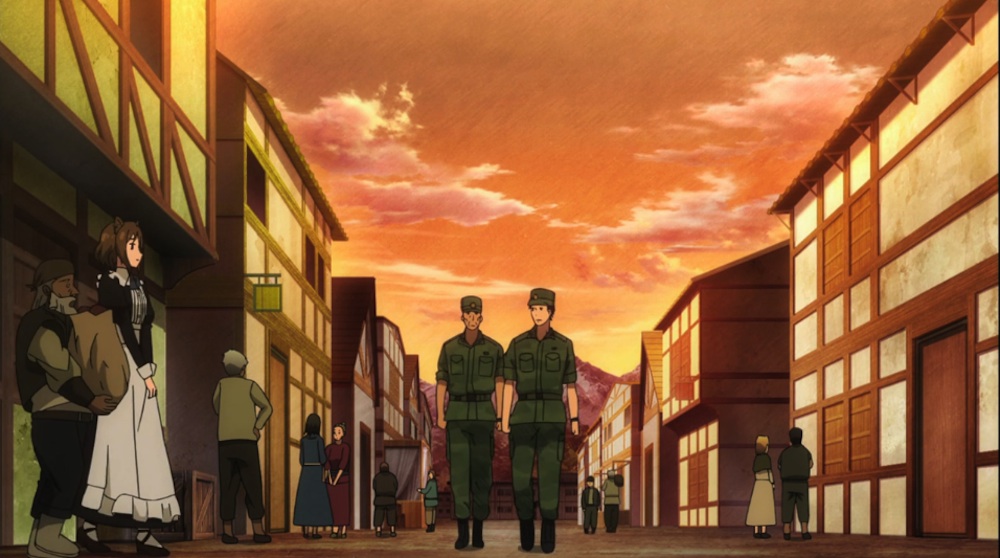 "Boom-town is SO bourgeoisie..think of it as an artesianal flea market."
This is causing some consternation as the rapidly burgeoning town is expanding to the point that security is becoming an issue. However, the people coming to this place have been through hell and thus are highly motivated to not ruin a good thing. Additionally the mayor of Italica has sent some of her combat capable domestic help to assist, and others are doing their bit as well.
For example, the harpy with the prismatic plumage is some variety of mage and was one of the female prisoners from the bandit army that attacked Italica, She appears to have been deputized as an MP to help with security and here is seen patrolling with Mercury...who is still hanging around town, and is by far the strongest disincentive for people to get out of line. 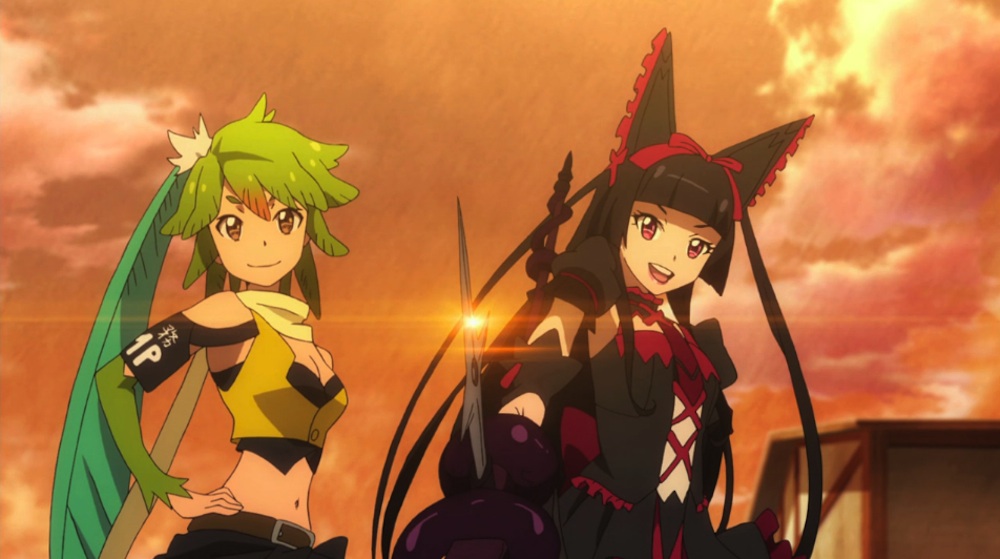 Together...they fight crime!
Over drinks the 3rd recon unit's medic expresses concern that Tuka is still ambling down the narrowing corridors of her sanity as she is simply refusing to come to terms with her fathers death... 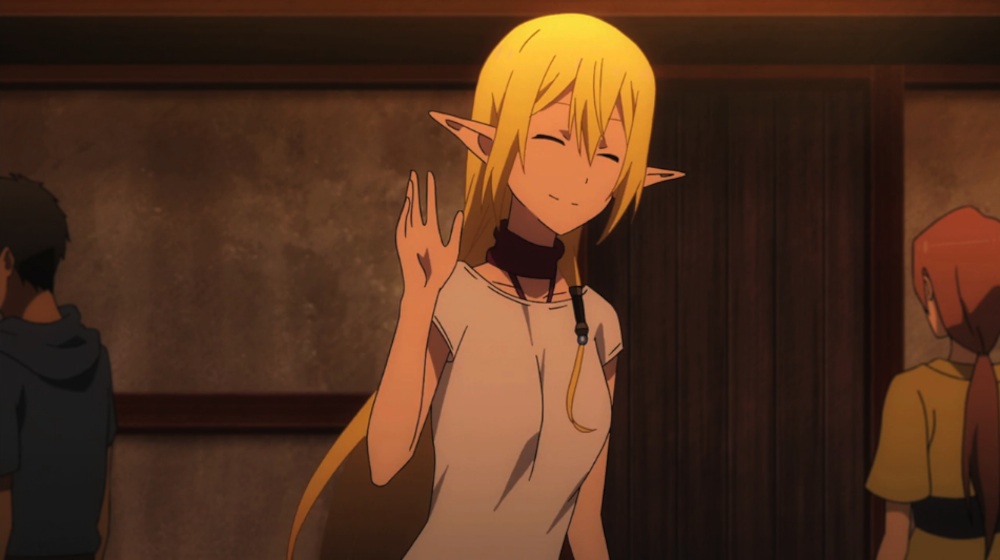 +4 to DISBELIEVE but -1D6 SAN
We get a little more insight into Rory's philosophy/eschatology, which is not nearly as nihilistic as one might suppose from someone who acts as a reaper of souls for some god of death. 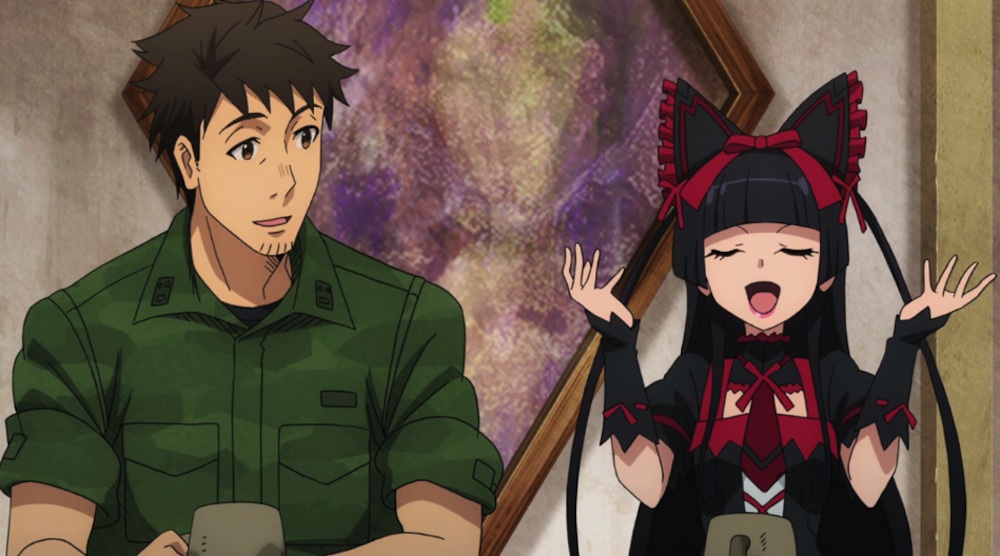 "No. No. No. Not like chicken at all. More like pork. But it's like everyone of them is spiced uniquely. "
The short of it is that she sees death as the climax of a life, but it is only as meaningful as the life itself. Therefore, in her view, celebrating death involves honoring and protecting life as well as encouraging people to live their lives well.
That's the theory...
We are also reminded that Rory, as a demigod is most definitely not any sort of bodhisattvaa and is not a nun but we are saved from the awkwardness when an adventure hook walks into the story. 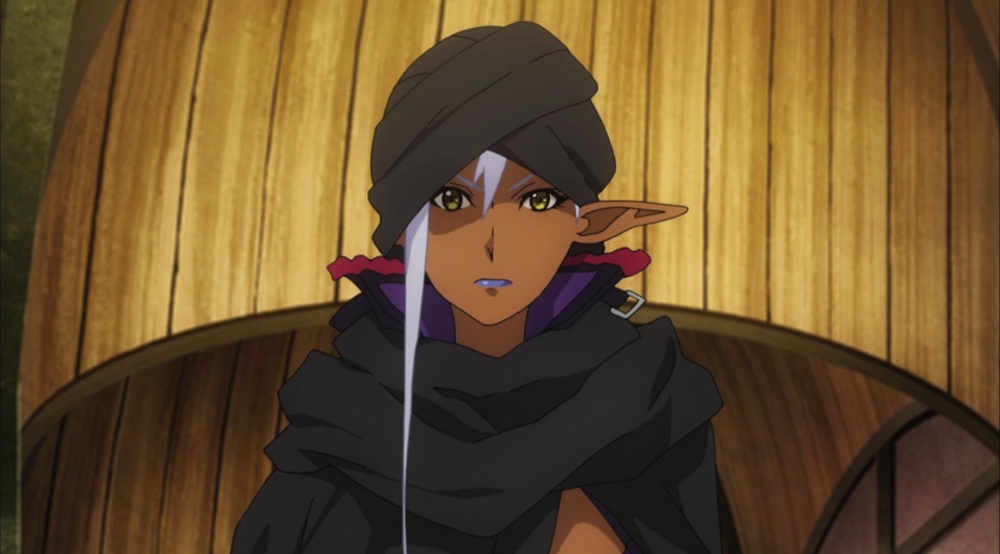 A one eared dark elf with a sword who protects children...sounds like adventure to me.
Unfortunately, a series of perfectly reasonable misunderstandings exacerbated by Rory being a loon result in the hook remaining unbitten. Thus, instead of epic high adventure, next week looks to be court intrigue.
This episode, very much like the first eight, is SO genuinely interesting and well thought out that the previous two episodes seem utterly incongruous. Furthermore, the appreciation in this episode for the economic dynamism and creative synergy that can come from different cultures coming together (provided there is law and order) is in such stark contrast to the xenophobia of those two episodes that I do wonder if there was not some degree of executive meddling involved there.
GATE appears to be quite well and truly back on track. I just wish I knew how many more episodes there are...there seems to be no consensus on that point.

1 Further, as a result of the treaty with Italica/Itarica, isn't that whole region pretty much a free-trade zone now?  As I cannot imagine that the Empire is known for their light tax hand, people woiuld be pouring into the Arnus area....

2 I'm not sure about that but it seems unlikely that the JSDF is collecting taxes on the refugees, so, as far as Arnus goes you are surely right. Italica is a major trading hub with at least two Roman style roads and a port terminating there, so while it is not at ground zero for this boom, the town is uniquely well positioned to profit from the situation, which is, after all, less than a days travel from them. The fact that the mayor and effective regent (the Housekeeper) sent several of their household's crack team of beastly praetorian domestics to assist with security was surely not entirely gratitude. They are protecting and helping to develop a potential cash cow. I note upon re-watching it, that Tomita explicitly stated that some of the aforementioned maids had opened up at least one tavern, so Italica is actively invested in and drawing money from the rapidly growing bazaar.

You are correct, good sir.  My memories were a blend of the anime and manga.  In the anime ep6 (that I shall fondly recall until I take my dying breath*), Hamilton reads out the treaty.  Around 16:15-18 she lightly touches on the Alnus Community.

"The Alnus living community under guardianship of the JSDF is from now on exempted from all taxes raised on trading and money exchange within the city of Italica and all other areas within rule of Countess Formal."

**Not telling.  Brickmuppet runs a family blog.  It wasn't a shovel.

Italica is the nearest major city to Arnus, and most of the Japanese goods flowing in and being sold are being carried to Italica and redistributed from there. The goods are untaxed when they enter Italica, but there's nothing in that treaty that forbids Italica from taxing the goods as they leave for other destinations.

Besides which, there are other kinds of taxes. All that trade is causing a huge improvement in the GDP of Italica, and things like income taxes will be rising as a result.

Italica is doing fine out of this, believe it.