Guilty Pleasure...So Much Guilt Needs More Pleasure I just found out via Ubu's site that Stephen Den Beste is ordering Godannar...I can't help but blame myself. I was remiss in my blogging duties, I did not warn him.

Rather than struggle with explaining the rather complex setup I'll rely on ADV's own ad, which, to their credit is one of the best, most honest, series trailers ever.

More below the fold....
For someone like me, a big fan of the old 4 color Giant Robot shows, this should have been a home run. I'm almost certainly the target audience, a middle aged, frustrated otaku who's wasted his life and is old enough to purchase softcore Pr0n....and pathetic enough to actually do so in this case.

This show however, never quite gelled for me, despite the fact that its screwball soap opera story is well handled for the most part. The mech fights are cool, there are several nice hat tips to classic Japanese and British scifi shows. The characters are generally likable and humane and, with one glaring exception, behave fairly rationally and believably. The show was, despite its faults, interesting enough that I kept buying it and it does have some merits....even beyond the guilty pleasure aspect.

This is much more a harem show than, say, Van Dread in that several women do like the main male character,but unlike most harem shows, he is actually a genuine hero,and a fairly dashing one at that. This is a welcome departure from the bland cyphers that generally fill the role of "hero" in these shows. 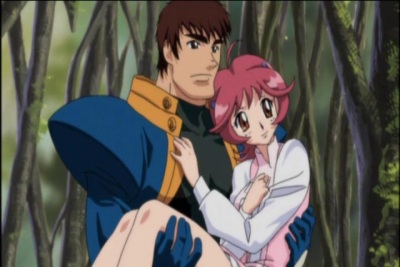 Additionally, there is a sense of propriety, most of these characters are adults. Shizuru for instance never acts on her feelings....she missed her chance.  The increasingly insane  interpersonal dramas of Goh's life are handled well, and, at least at first, mesh admirably with the menacing back story. This show is fairly watchable and is frequently quite funny though many of the laughs are  sophomoric and fan-service related.


In fact one of the bigger strikes against it is the completely over the top fan service...(that I just typed that is more depressing proof that I am of an age that far surpasses my actual life's  accomplishments).
...for this is a utopian future where,apparently, all young women are given massive injections of estradiol and progesterone and all of them....(with one exception) are curvy beyond words....curvy into the zone of....diminishing returns...

The fan service often goes way beyond titillating and is actually rather vulgar at points, though to be ashamedly honest, it is worth a couple of laughs in most episodes....

The other problem is the lack of villains.
Oh there are horrible monsters from beyond, with insidious powers, but there are no VILLAINS!

One of the great things about the old giant Robot Shows was the over the top villains such as Mazinger Z's mad Doctor Hell and his squabbling, deformed, demented and depraved underlings Ashler and Blocken . There is none of that here...the "Mimetic Beasts" might as well be a natural disaster, there is no real motivation on their part, though they do seem cunning at points.

There are other points that grate, Goh,is 27, and his young bride is...in high school ...this is a point I'd missed early on, as she was training to be a civilian mech pilot I thought she was in a technical college or something. (NOTE on this blog all married women are 18 years or older)

The difference in age is mildly bothersome, but is not nearly as distressing as her actual age and lack of any life experience.

The handling Goh's "late" fiance' is also creepy at first. When she comes back from the 'dead' she is, at best, developmentally challenged, this is played for laughs and titillation??
Ewwww!
This is somewhat mitigated by the fact that most of the other characters are good people who understand the wrongness of their situation.

The show has some bright spots too...

The British mech team is kind of cool, The Brits have Mechs, but their signature weapons are a set of super aircraft that would make Gerry Anderson proud.

From a character standpoint.
Goh's wife, once she gets her memories back is a very sympathetic and noble...if (understandably) slightly unhinged...character. (She is also the only realistically proportioned adult female in the series). Attractive, competent, and loyal, it is easy to see why Goh fell for her....

Also the Mech pilot Shizuru is particularly well done. In the old mech shows there was usually one likable, frequently awkward girl, not the heroine, who pined after the hero...but always lost out to the heroine....5 years ago Shizuru was that girl...now she has blossomed into a highly competent and professional mech pilot. She is a superb leader and instructor as well....
of course the show being what it is...
She has blossomed in other ways...
...and now suffers from Frazetta butt syndrome....which prevents her from fitting well in most mechs not specifically modified to handle her bo-danky and causes her difficulty fitting in tight places....
....this is actually a plot point.... 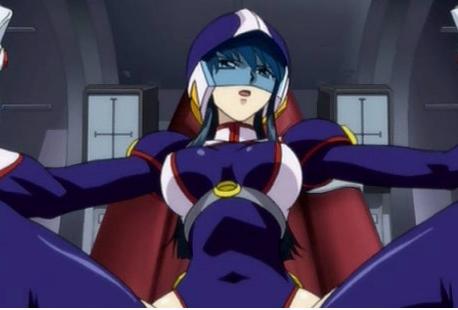 Note that even below the fold that picture had to be cropped for propriety...Nevertheless, camera angles and fan service notwithstanding Shizuru is a genuine badass...
in every way...
pun intended....
I'm ashamed to say.

There is also a good deal of development and exploration  of that often neglected component of any mech team....the perpetually suffering maintenance staff....one of the best parts of the show in fact.

The show is a fairly funny homage to the giant robots of old, has good fights and decent character development and lots of comely young lasses.

It also is vulgar to the point of nausea at times and the second half does not really live up to the promise of the first.

Note that with regards to the above linked ad the show delivers!
It's got 'bot's babes, bouncieness and blowing-up in spades...I had thought that it was going to deliver in other areas as well, and it did for a time....I suspect that Ubu's dreaded conversation did take place during the development of this show.

Godannar tries to do a lot of interesting things but it gets downright creepy at times and  it never quite lives up to its promise. It is a guilty pleasure that did not sufficiently assuage my guilt....
OTOH I bought the whole thing...
and I laughed at points....
I am deeply ashamed...
...but at least its not Patallirro.

Update: One thing I inexplicably forgot to mention, one of the biggest problems the show has is how grim it gets in the last quarter. While there are tragic moments earlier in the show...and a lot of the early episodes focus on Goh's guilt over his deceased teamates, the show is basically upbeat and wacky....untill halfway thru series 2 when it isn't....and boy...at that point it ISN'T.

1 Heh. I'd forgotten that ad.  Yep, it sums up the series perfectly. Good spot on Dr. Aoi's, uh, accident there.  Somehow I missed it completely.  What episode was that?  And how much of the series did you watch in slo-mo, hmmmmm?

I echo the complaint; there are NOT ANY VILLAINS.  The mimetic beasts are a very, very, thin excuse for opposition.  It's obvious at time that they're acting with intelligence, as they even execute a strategy to take down Dannar base, which failed only because of a specific design feature (given away in the "second season" previews).  I kept expecting some sort of grand revelation as to what or who was really behind it all, something like we got in Shingu. I figured someone we knew was going to have a secret role.

Well, I was right about that last bit.  Just not how I expected.  I don't think it's a good thing when you see "the major plot revelation of the series" and break out in howls of laughter at how stupid and illogical it is.  I mean, no "refrigerator moment" here; no such appliance was going to wait that long. Instead, it came over to the computer and mugged me.

2 From that description it really does sound like Gravion. Some of the later revelations in the second Gravion series were less "Shock!" than "You can't be serious!" or "You guys can't be that stupid!"

Some of the later revelations in the second Gravion series were less "Shock!" than "You can't be serious!" or "You guys can't be that stupid!"

For some reason, I'm hearing that in Pedro's voice....