GATE Ends ...sort of.
For a show that has had some truly sublime moments, this last episode was something of an anti-climax, being nothing more than a set up for another cour. That makes it less than satisfying as a series finale.
This isn't isn't any sort of cliffhanger as such, it just puts political and procedural roadblocks in the way of the dark elf from the last episode. 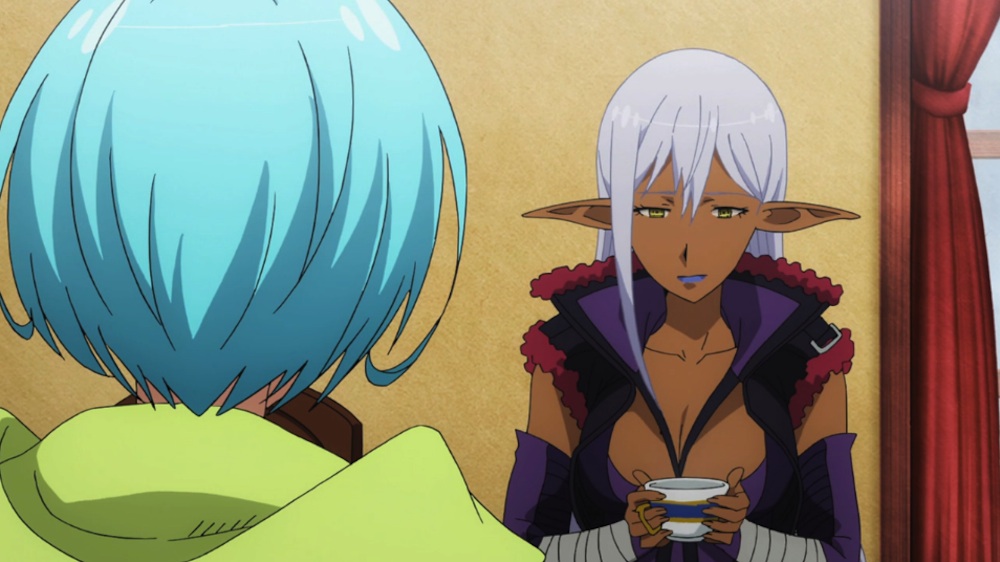 Who has TWO ears.
She's the last hope for her people and the burden is weighing heavily on her.
One neat bit of detail; the different languages continue to be an issue.Yao Haa Dushi, the aforementioned dark elf is thwarted mainly by the language barrier until Leili provides translation (after which she continues to be thwarted by other means). Several other minor characters lament their limited knowledge of other languages and phrase books are shown to be precious things that can be the  key to a decent job for the locals.
This episode did throw out a few other character/plot threads. Tuka, the crazy cracker elf may be shell-shocked and broken, but she is highly functional and sharp enough that she able to hold down a job in the refugee camp that requires at least a degree of literacy, 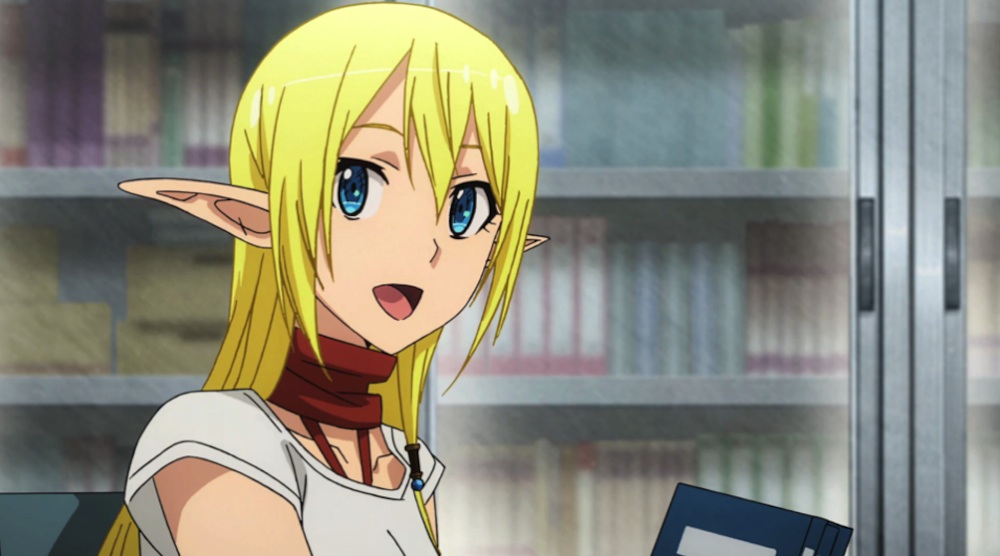 It turns out that the lepus lass who runs one of the bars, is actually Delilah with a radically different hairstyle. 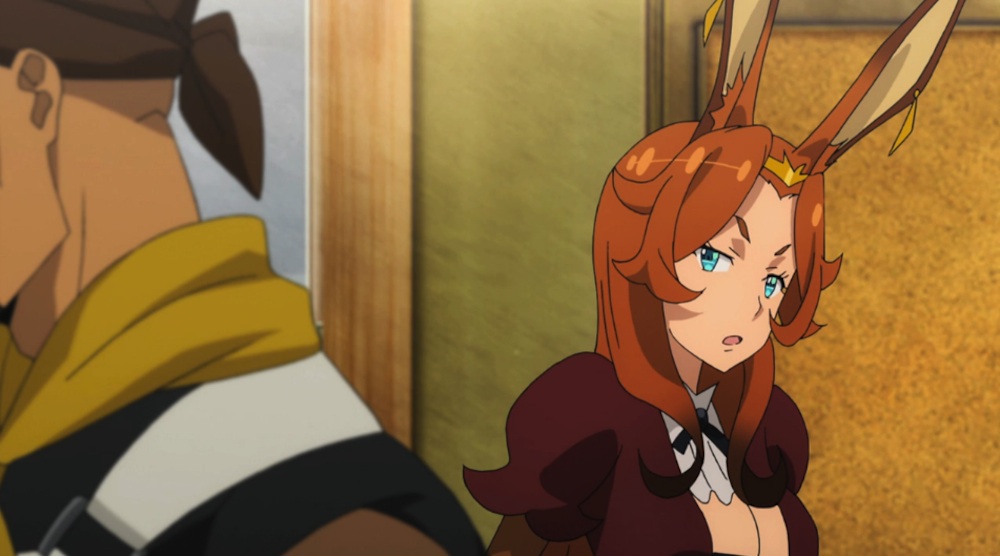 'Dem earrings...
She was one of Kain's  praetorian maids from Italica introduced in episode 7.  It's unclear if her coiffure is intended as a disguise or is the result of access to modern conditioner. She certainly seems to have some ulterior motive, though whether she's working for Kain, the Empire or a third party is unclear.
The harpy mage who went from POW to security guard actually has a name, (Myutie)... 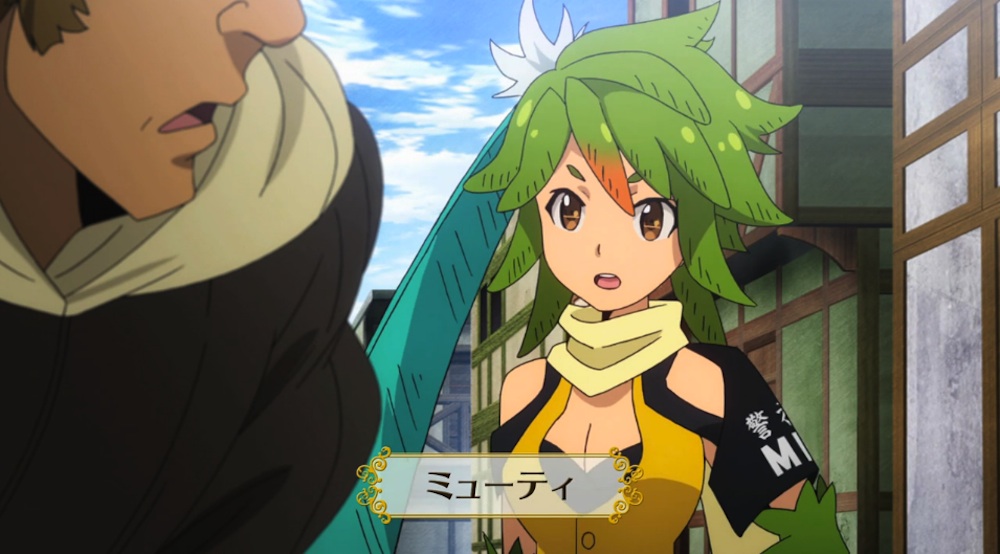 ...and thus might be more than a nice continuity nod.
The male fans having been generously provided with a cornucopia of maids, the production staff has thrown a bone to the otakuettes as well.... 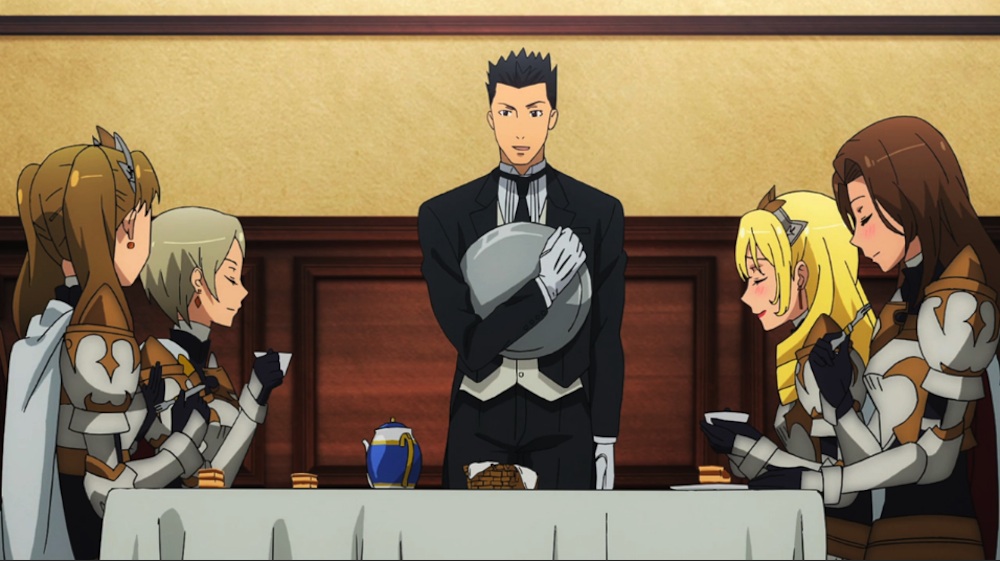 ...to complement the yaoi appreciation subplot.
Finally,  in a truly inspired moment, Leili is applying science to her magical theory. She has gotten hold of a middle school chemistry book...and is modifying her sorcery to take its wisdom into account. 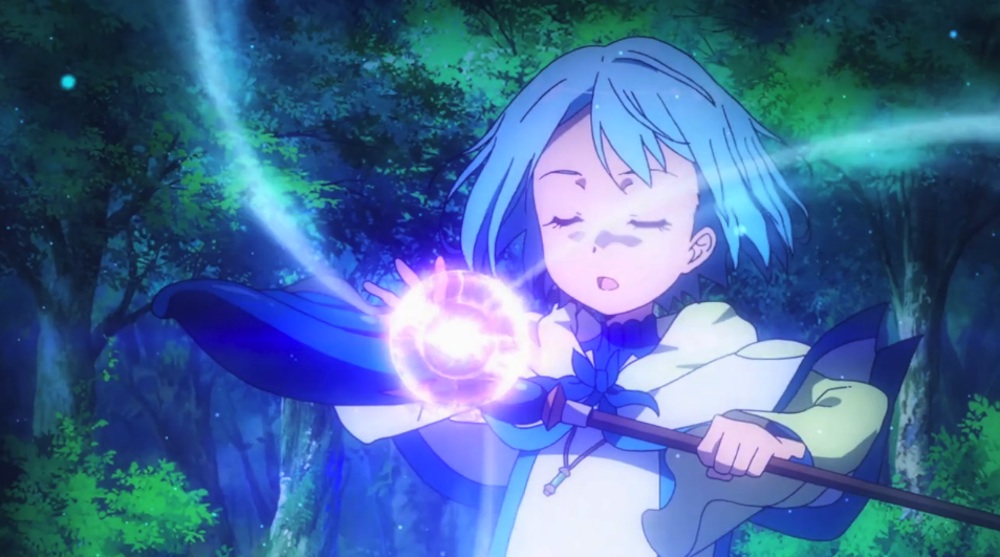 This is completely logical and totally in character for her. Her teacher is quite impressed and seems to grasp the potential of her refining his techniques with the science of the other world.
This episode was certainly neat and had a lot going on, but as a season ender it was rather unsatisfying.
The series high-point was probably Rory's speech in episode 8.
The detail and thought that has gone into the story of this show is remarkable and the characters tend to be quite interesting. Aside from the unspeakable mess that was episodes 9 and 10, everyone and every group has had realistic and well thought out motivations and are astonishingly well realized (though Itami is coming close to Gary Stu territory). Note that hose two episodes (9&10) are so different in tone and they really don't contribute much to the story (aside from the flower laying ceremony) that I'm unsure if the weird and incongruous divergence wasn't some sort of executive meddling...it does not seem to fit with the meticulous thoughtfulness of the rest of the series.
All in all this was one of the better shows in recent years Episodes 9&10 nearly killed it for me, but  it bounced back immediately and it is a testament to how good the show is that despite those,  I'm looking forward to this show's continuation in January.

1 On a completely different topic (as I haven't watched this ep yet) you might want to check back in on Gatchaman Insight. It's been very uneven, but the plot went in an...interesting direction.

2 I was quite unimpressed with the first few episodes. To sit though that mess I think one would have to be really bo.... Oh.

3 Yeah, they lost me a few episodes in, and I loved the first series. Too much social media and politics, and I just didn't care about New Girl as much as they wanted me to. Does she by any chance sacrifice herself to take headbubbles and badcrowds out of the series before it's half over? Because that would help a lot.

4 I was quite unimpressed with the first few episodes. To sit though that mess I think one would have to be really bo.... Oh.
:-P

Yeah, the first half of the season is pretty blah.  All the social media stuff actually has a point and leads into the actual overarching plot.  Which, as I mentioned, goes in an interesting direction.  Still a little wobbly, but not too bad.