Railgun S First Thoughts Having watched episode 1 of A Certain Scientific Railgun S I have a couple of very preliminary observations.
First, I'm struck by the fact that this does not feel like a different series at all. This episode is following right on the heels of the finale of the previous series, for instance Uiharu and Saten still have Haruue as their roommate and the three of them have enlisted Misaka to help them respond to one aspect of the previous show's aftermath. This series is NOT a standalone purchase.
Misaka thus far remains one of the more likable anime heroines I've seen.
On the other hand the episode introduces Shoukuho Misaki and in 2 minutes manages to establish her as of the most repulsive and genuinely scary antagonists I've ever seen. 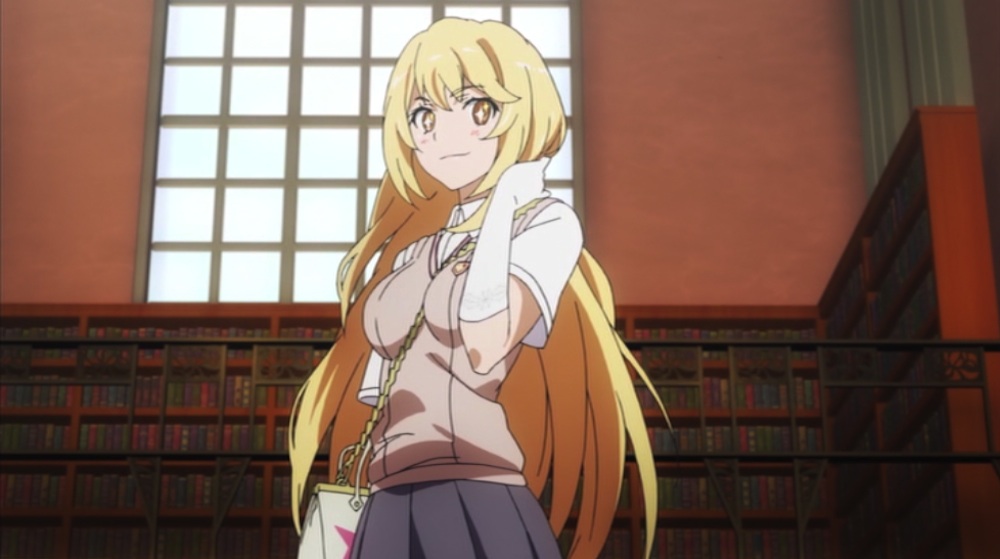 This girl needs to die a lot.
She's arrogant, presumptuous, cruel, has no respect for personal space, thinks of people as objects for her amusement, and, being absolutely gorgeous, has a fawning cadre of "retainers".  It's unclear if her fans are simply poor judges of character or are victims as she is a level 5 mind controller. She seems particularly upset that Misaka is immune to her talent and in a momentary fit of pique demonstrates that "Level 5" and "Mind Control" should never be allowed to overlap.
Which begs the question. What the hell were the people who study and train  these kids thinking? Gracious!
Beyond that the premiere is a standard Railgun episode establishing what decent people Misaka and most of her friends are and why they tolerate Kuroko...because she is very useful to have around when Misaka needs to do something gratuitously awesome.
This sequel is off to a really fine start.

The good news is that Misaki (aka "Mental Out") doesn't show up again in the series except for a cameo in the last episode.

Which is good because in the canon she eventually does something really foul to Mikoto, which they didn't include in this series. I thought Mikoto would kill her for it, but I guess that's a step too far for Mikoto, who seems to be the only Level 5 who isn't a sociopath.

Misaki is a sociopath, and there's a strong implication that she is too old to be in middle school, but stays there by using her power to change everyone's memory, including administrators. (And if you think Misaki is a monster, wait until you see Accelerator.)

Her fawning cadre aren't that way because she's beautiful. She uses her power to rewrite their memories to make them that way.

The first 16 episodes this time are the Sisters arc, which is dark dark dark but has a good ending. The rest of the series (beginning ep 19) is the SIlent Party arc, which is great from start to finish.

2 I don't buy the party line on the protags in Railgun. In my opinion they are pretty awful [1], with lower ranks being less so. Railgun's lesbian friend is the only anime character ever who made me consider how I should kill her (my answer is the poison: can't teleport out of that). Of course, any such thinking is pointless and the main character magic will make them triumph. For that reason I'm not going to root for any antagonists like the girl pictured in the post: they are all puppets of the screenwriter, made to be sacrificed.
At least Naruto and Goku used the main character magic for good.
[1] (with the exception of a techer woman that seemed human)

3 Oh you get no arguments from me on Kuroko. She's a rotten human being.  In an earlier post I lamented

(*She tries (and fails spectacularly) to drug and presumably molest Mikoto at least twice...I mean good Lord, she's pretty much horrible. The only reason she's a "good guy" is because she feels personally invested in her identity as a Judgement officer, likes the power she gets from the job and is the vector for getting Mikoto and the others involved in the larger story. Yes she's comic relief, but.... )

However, I think Mikoto is pretty decent. She's not perfect but just the fact that she's fairly she's down to earth is a major accomplishment given that everyone else we've seen on her level is corrupted by their power and they do not seem to be discouraged from that.
She's also a "good guy" for the right reasons, as opposed to Kuroko who is on a power trip.

4 What were they thinking? Something like this. (spoilers for Index, also quite dark...)

"The supernatural exists, including literal angels and literal demons. Some of these supernatural entities have as their objective the complete extermination of humanity. Those are -angels-, the demons are considerably worse. Disaster has so far been staved off only by the intervention of a power-mad church willing to plumb any depths of sin in order to preserve its own secret mastery. Humankind is at the precipice over a sea of horrors where the living would envy the dead.

We have discovered a method by which psychic powers can be induced in test subjects. The method only works on children. Our theories for why it works at all, and exactly what it does, are incomplete and patchy.

We do not have the luxury of time. We require that this potential be developed into weapons - weapons stronger than nukes. Your mission is to deliver those weapons in time to save the world. Any means will be tolerated. Balk at no ethical considerations. The only unacceptable outcome is failure. Get to work, Dr. Mengele."

No, of course not literally. But that's essentially a good description of the situation - in Index, the world is literally one Touma away from apocalypse at one point. If you were the sort of person who can be a nuclear strategist, this is kind of the ultimate nightmare scenario. Threats you do not understand, popping up according to logic you do not understand, responsive to no pressure you can bring to bear, some of which are pinpricks and some of which are mortal blows, and your only defense is an organization who won't talk to you and is willing to kill you just to hide its own existence...

In that situation, the existence of Academy City can be understood - a kind of Manhattan Project that refines little kids instead of uranium, ghastly if you have the right details, but happy enough on the surface that most people can fool themselves into thinking that everything is all right. Of course the scientists are evil - who else would, or could, do what they do? Yet if you believe that those things must be done, then all you can do is tell them to get to it and try not to watch how much fun they're having.

Railgun is about Academy City itself; Index sets it in a world that almost, almost justifies how monstrous it is. It's a shame that Railgun is just a much better show; by itself it's incomplete, but getting through enough Index to get the background means, well, slogging through Index...

getting through enough Index to get the background means, well, slogging through Index... [/quote]
I was afraid of that.

Railgun S pretty much overlaps the first Index series in time. Ep 15 of Railgun S covers the same event as ep 14 of Index. (Though there's a bit of Rashomon difference in the telling.)

I watched the first Index series but didn't watch the second one. And I didn't have any trouble keeping up with events in either Railgun series.

7 My headcanon for Index/Railgun (not having read the books), is that they live in a lesser creation - one in which the Creator left a crazy number of backdoors in his code, which angels, demons, and people have been using to run amuck throughout history.  Touma is a "reset" - his Imagine Breaker is identical with the intent of the Creator, which means only reality survives his touch.  All the various hacks, backdoors, and cheats, which the espers and magicians and so forth are using to work their will on the world, are egotistical alterations to the Creation as intended, perversions of the literal will of god, and are negated by his right hand.
He's pretty much a walking relic, a saint.  It's a hell of a thing to hang on a teen protagonist, aligning him with the original will of god.  And people complain about "Jesus Yamato"!

8 They discuss that in pseudo-scientific terms in Index, actually. Essentially, the theory is that the esper generates a "personal reality" in which their power can function, and that the strength of the esper is largely related to how successful they are at superimposing that reality on consensus reality.

By extension, Touma is either extremely powerful, OR his power just has a much easier time of it (because he's not really modifying base reality, just reasserting it or disrupting the modifications to it that are made by others). Difference between pushing the boulder uphill and pushing it down, maybe?

Of course, that might not be what's actually going on (and, frankly, it's not directly contradicting your theory either, just couched in different terms.)