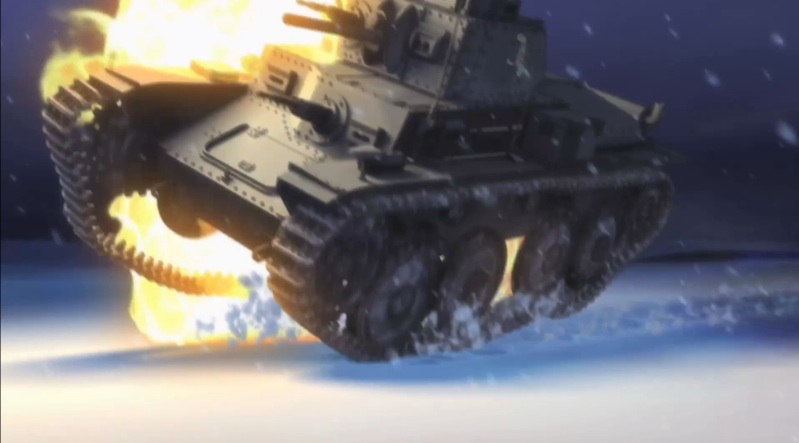 Wow!
It was getting sappy there for a minute, but Girls und Panzer #9 was an astonishingly entertaining bit of mayhem. The climax was one of the best paced, most pitch perfect action sequences I've seen in a while, particularly because all the Ooarai girls, but especially Goosfish and Turtle teams, were smart and used their inferior equipment to its best advantage. Nicely done.


The bit of exposition at the beginning about the Student Council's motivation makes as much sense as anything else in the show.


It seems that the multi-mile long school ships aren't just whacked in real life, they don't make economic sense in the shows universe either.

It was mentioned in an earlier episode that the school ships started as a bit of educational mantra ("On a ship everyone must work together"). The slogan then metastasized to became a huge Ministry of Education boondoggle. Presumably, other countries built a schoolship or two to experiment with the idea, for prestige reasons and because they assumed the Japanese wouldn't invest that kind of money if it weren't paying off. Well, it turns out that the Ginormous Japanese school ships are bureaucratic money sink of dubious educational benefit.  Now the budgets have been cut, which is why the soccer team lost funding and why they sold off all but the junk tanks. At this point the budget problem is so acute the Ministry of Education is shutting down several schoolships. However, to save face and avoid public ire, they are going about this by quietly shutting down the schools without high-profile awards and programs.

There is some irony here. It looks like Oorai tried to control costs by shutting down high profile but expensive programs not directly tied to academics, with the result that it is about to be shut down for good. Given these perverse incentives, the student council bet that the M.O.E. won't shut down the school that wins the Women's Tank Tournament. Thus, they conspired to re-instate Debutante Tank Fighting as part of a Hail Mary pass to save the school...and bogart the endowment money to pay for ship repairs and such. For the Administration this is a meaningless gesture because the odds are long enough to be safely ignored, but the girls are now in spitting distance of pulling it off.


Lots of good leadership lessons in this episode.
Dispair is a sin
Morale is important.
Lead from the front.
Frequently look at things from an outside perspective.
If your gunner is inept, have her load.

Works equally well in the Artillery world as well my friend

2 I'm puzzled (and a bit disturbed) by the one screenshot you posted above.  IIRC, Debutante Tank Fighting was supposed to involve mock battles, using low-impact dummy ammunition.  However, that tank looks to me like it's been hit by a real high-explosive shell.  Please tell me that isn't the case.

3 It's real enough so the tank ended upside down.

4 It's real enough so the tank ended upside down.

That's a heavy hit, then, and I can see in the screenshot that the tread was knocked off the drive wheels.  That means that the shell was a real one, which wound up in one tank's ammo load either by accident or by chicanery on one team's part.

Did the shell penetrate the tank's armour? That possibility is what really disturbs me about this; like SDB, I disapprove of anime that shows girls dying ugly deaths, and being in a tank that "brews up" is an especially ugly way to die.

5 In the action against Gloriana it is mentioned that the interiors of the tanks have been fitted with a special carbon composite crew compartment that is impervious to WW2 era ordinance.  Saori mentions this to Miho when trying to get her in the tank as there is obviously no protection to someone who'se head is sticking out. It seems to be strongly implied that there have been accidents.

Note too that in the flashback to the match Miho lost, it's clear that the other tank crew WOULD have died had she not gone to their aid (loosing the match in the process). She was DISOWNED for doing this, indicating that a fatality in a tournament is not unexpected.

One final note. Legal adulthood in Japan is a multi-step process, but I think that high-schools are still not compulsory, that is. you can go get a job at 16. High schools are either college prep schools or trade schools and the students are more or less considered adults. This varies from school to school I'm sure. These are not juviniles in the same way we think of them. Yes they are adolescents and an adult wil burn in hell and go to jail if they sleep with them, but they are otherwise adults in a way similar aged people in the US* simply are not.

This sport is like a junior college league of NASCAR...but on steroids and with more 'splody.

* ...or a lot of twenty and even thirtysomethings nowadays...but that is a rant for another time.

6 There is real-world precedent for that. The inside of the M1 Abrams is lined with Kevlar cloth, to protect the crew from spalling.

7 OK. I just re-read the whole post and realized that the below the fold portion was rather incoherent. It looks like I'd deleted half a paragraph...or something..in the process of posting it. Anyway the bit below the fold makes grammatical and contextual sense now