All the World is A Lie
The Batman Versus Superman film has gotten execrable reviews, and, in any event, exams, term papers and various other adult responsibilities have precluded anything that took time or misallocated my already limited creativity reserves until this week.
My friend BOB!1! claimed to have enjoyed the film, but he had really liked Wing Commander too and so is an unreliable gauge of such matters. Nevertheless, with some trepidation, I accompanied him when he went to see it again this week.
A southern gentleman is expected to comport himself with a degree of stoicism and gentility that makes adequate description of what I sat through difficult to express.
Fortunately, this blog employs some imaginary cartoon debutantes who are not so constrained.

"What the HELL ah these nuhds thinkin'!? This heah is the best DC movie EVAH!"
Believe not the naysayers!
This is an ambitious film that tries to cover an awful lot of territory and bring to the big screen multiple iconic characters from the DC comic book universe. It's surprisingly successful in this and for fans of the DC universe this movie is a special treat, being full of all manner of easter eggs. It's a dark film that's asking some tough questions about power, responsibility and idealism, and is surprisingly thoughtful for a superhero film.
Afleck as Batman should not work except as parody, and yet he pulls off one of the best representations of the Dark Night, ever. Henry Cavill does a fine Superman, wracked with guilt over the people he could not save, and the actions he had to take in the process of saving the world during events portrayed at the beginning of the film...in what is a gut-wrenching homage to the September 11th attacks.
For a brief moment when Catwoman shows up I started to have doubts...but the payoff from even that sideplot is quite satisfying.. It turns out not to be Catwoman at ALL!

Oh...My...God Gail Gadot IS Wonder Woman. This film really gets what is a terribly difficult character right. They tweaked her backstory a bit. Instead of fighting in World War Two she fought as part of an eclectic band  of heroes in the FIRST World War...and that horror destroyed her faith in humanity. 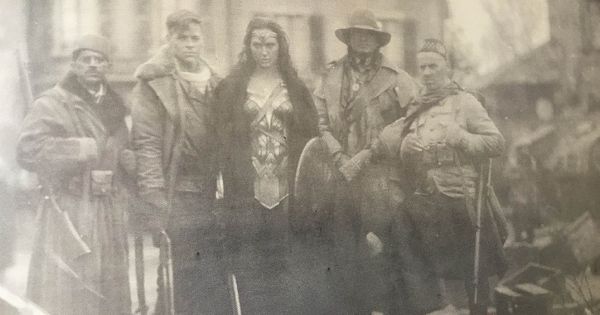 I'm not sure who the others are but I imagine there is much geekery in this photo.

When she finally enters the fray, she does so like Eowyn in the Pelinore Fields. They really nailed this character in a way that I never expected was possible.
This film tells two important Superman stories, gives an updated and very satisfying origin for one of DC's most important villains, introduces several major DC Characters and does a character study of Batman in the midst of an ethical dilemma and an emotional dark patch that has him quite explicitly off his game in some ways. This actually allows the movie to give a most gratifying bit of spotlight to Alfred the Butler who is portrayed as not only competent, but pulling up some of Batman's slack during this emotional nadir. That's...a LOT of ground to cover...Indeed, this could have been three films...it is not...which leads to one legitimate complaint regarding the movie.
It is LONG.

"Ah had to pee SOOO bad at the end...!" *
Ahem...
However this movie works. It appears to be a genuine labor of love by people who "get" the DC universe and have produced a solid, well paced, thoroughly enjoyable and satisfying cinematic experience. I will probably see it again.
*One helpful note: There is no stinger, so one can just go straight to the bathroom after the film rather than sit through the interminable, bladder bursting credits.

1 I agree it was an entertaining film, and I am looking forward to where DC takes their film-universe next.  I do have two quarrels with the movie, though: 1.  Batman kills a lot of people
2.  Batman uses guns.

My greatest exposure to Batman was through the animated Batman and Justice League TV shows, and I just can't reconcile that version of the character with the one in this film.

Still entertaining though, and worth watching.

2 I took that as part of the point. Batman is at a particularly dark point and is going over to the dark side. The branding epitomizes that.

Note that he is generally aiming the guns at equipment rather than the actual people that it explodes, flies through the air and falls on....a terribly semantic point to be sure, but as Alfred notes, he is really not himself. Only when he realizes that Superman is some dude trying to save his mother does he begin to get a grip.

Amusingly, it's not until the point when Wonder Woman (unaware of the Kryptonite spear) angrily confronts him about the collateral damage that results from his leading Doomsday INTO the city (this is after Superman is dead) that he realizes that he has done exactly the same thing that Superman did at the beginning of the film, for the same reason...it is the only way to stop a world level threat.

This film has Batman go right to the edge of the moral event horizon before stepping back...and there is a whole LOT of introspection in his future.

At this point I can easily see Batman, (who had quite a few uncomfortable self reflections in this film) very much BECOMING the JLA Batman, to assure himself that he'll never go down that path again.

3 I enjoyed Afleck's Batman a lot more than I ever expected to (which was practically not at all).  He was actually quite good.  I didn't enjoy almost anything else about the film.  It uses characterizations that I don't care for, and I'm not interested in DC taking the heroes to a darker place so they can reflect and agonize on life.  But to be fair, when they said Singer was the choice to launch the DC Movie Universe which would actually start with Man of Steel, I knew then that the franchise was moving in a direction I wouldn't like.

4 "I'm not interested in DC taking the heroes to a darker place so they can reflect and agonize on life."
We got that once.  It was called Knightfall.  Afterwards, the letters sections were full of people complaining.  DC's response?  "You wanted a darker Batman and we gave you one."  Very David Bowie in Labyrinth.

5 Elaborating on a point that I tried to make above: All three heroes, in the course of this film, actually turn their backs on being dark and gritty. Batman's been branding people and is willing to kill Superman for not abiding by a higher standard than he maintains. Superman had his dark moment in the last movie and decides to redeem himself...by harassing Batman*. Wonderwoman, gave up on humanity due to the horrors she saw a century ago and has been letting crap happen ever since. All three at one point or another decide..."No, I'm better than this." This movie is, in many ways, a rejection of the dark gritty superhero, and this dynamic makes it an even better jumping off point for the JLA than it might otherwise have been.

* A long missive on the misdirected virtuousness of SJWs could probably be written about that.

6 One amusing point noticed by my friend BOB!1!  Batman in this film is Alfred's Robin. Alfred is doing all the detective work and Batman is the distracting loon who draws the villain's fire.  It's explicitly stated that Batman is off his game, but it is also noted pointedly by Alfred that the only successful gumshoe work he's done lately has been as Bruce Wayne being Bruce Wayne.