Much like Hidemari Sketch, this show concerns cute girls in a high school who get stressed out over the little curveballs life throws at them.

HIGH SCHOOL OF THE DEAD differs in that the curveballs include flesh eating zombies. 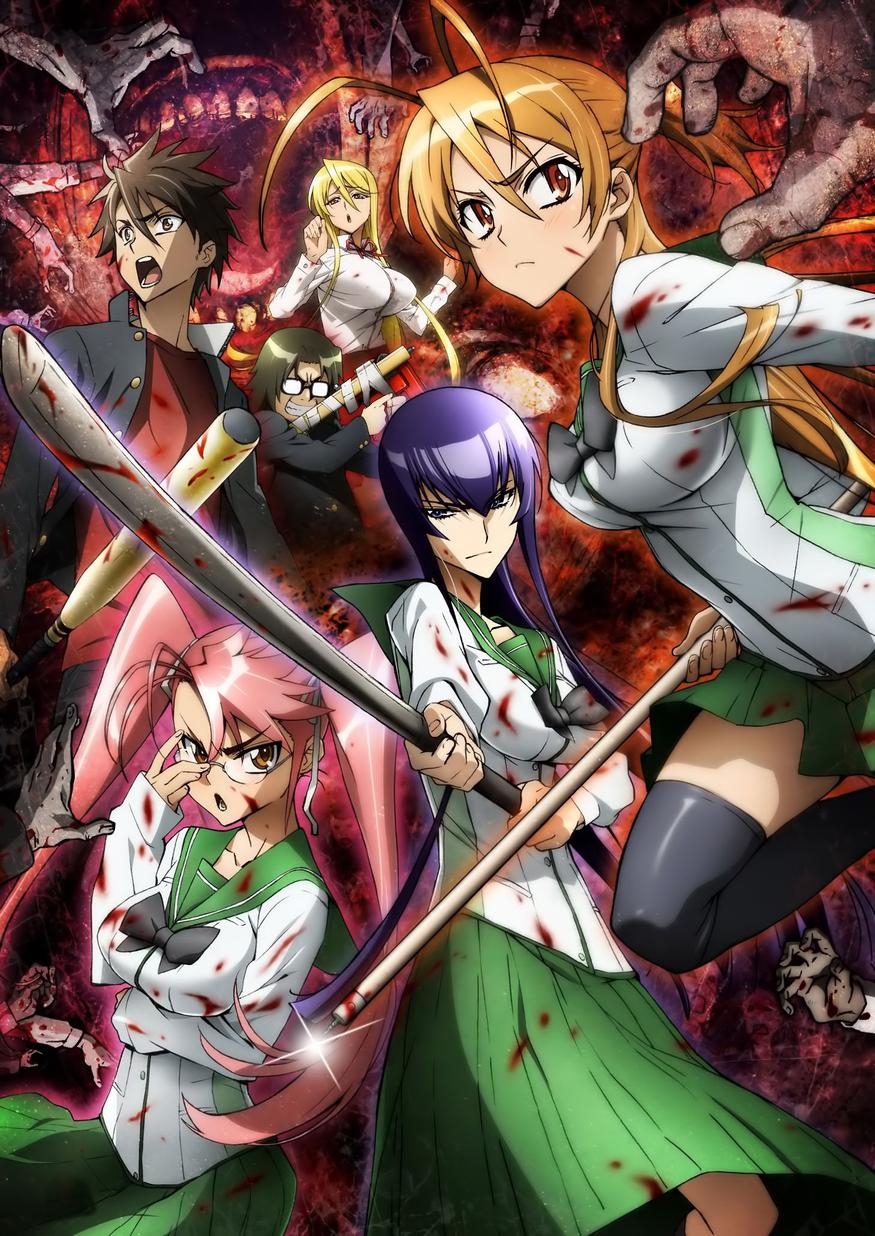 The whole zombie apocalypse idea has been done so often that it is a cliche' and this show breaks no new ground in overall concept. However, it is a very well executed example of the genre.

Now I have heard some complaints about the show and the most persistent one is that the fanservice is excessive.

There is some truth to this...

Not only are there lots of powertools... 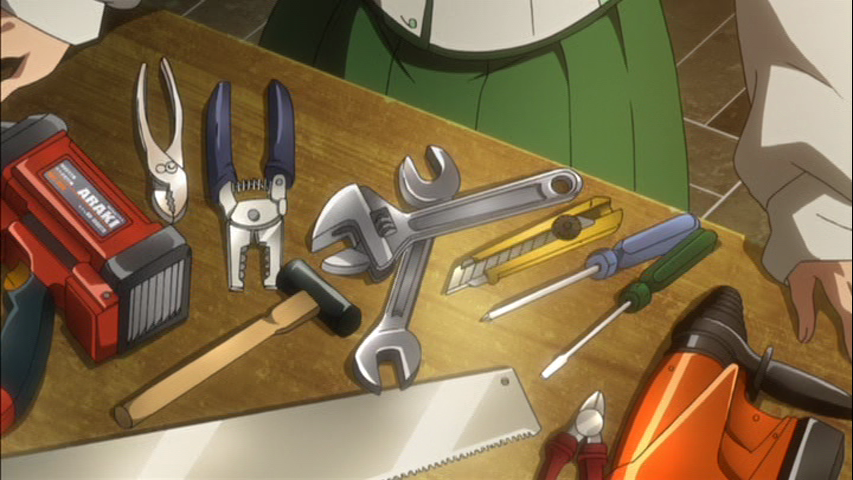 ....but we get to see cute, snarky, intelligent girls using said power tools and doing so in a manner not consistent with manufacturer recommendations! 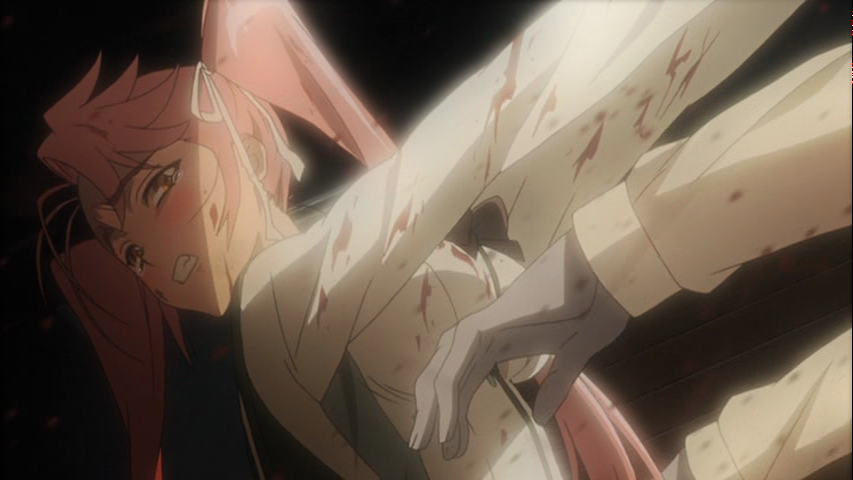 Oh..wait....yeah...the other fans.
Actually this show did come close to diminishing returns. as it is quite gratuitous in both its horror... 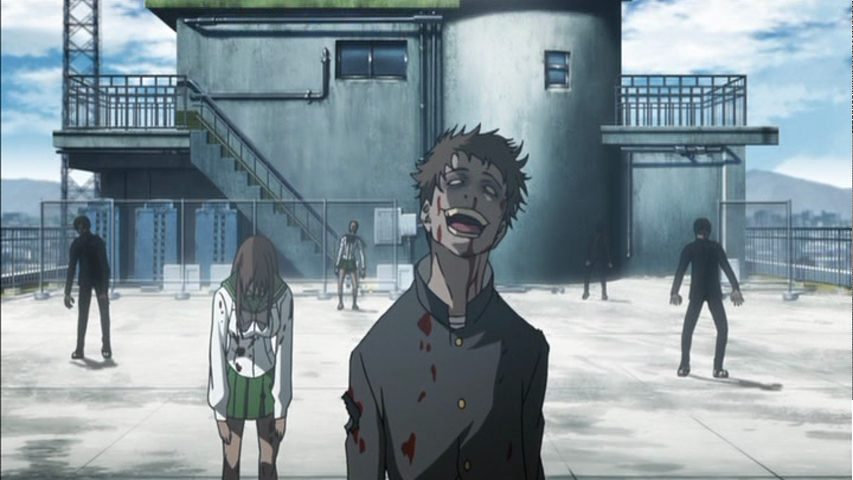 ...and occasionally its cheesecake.

Just think. Men who have never seen real boobs move were paid money to animate this.


However, the show has superb pacing, likable characters and very good writing. The dub is one of the absolute best I have ever heard, with  rapid-fire dialog that is fantastically delivered. The rewrite for the dub is  faithful but a bit more engaging than the subs. This is one of 3 or four shows that I think are better in their US dubbed versions. The American VA's do a stellar job in bringing out the characters They really make this show work with character nuances the subs can't quite catch.

The show is an excersize in gratuity, but it never bored me and did not devolve into utter nihilism. I quite enjoyed it.

UPDATE: The dubiously researched fluid dynamics animation above is from one particular episode that is...excessively...excessive in that regard. However, switching gears did serve as a welcome respite from the horror. As gruesome and silly as the show can be, it was actually that episode which made it clear that the show is ultimately about people who looked into that dark pit and determined that they will not abandon their humanity.
...the men to not take advantage of the women when they are helpless(?)... and long though the odds may be,  this group of people will not abandon a little girl to die. 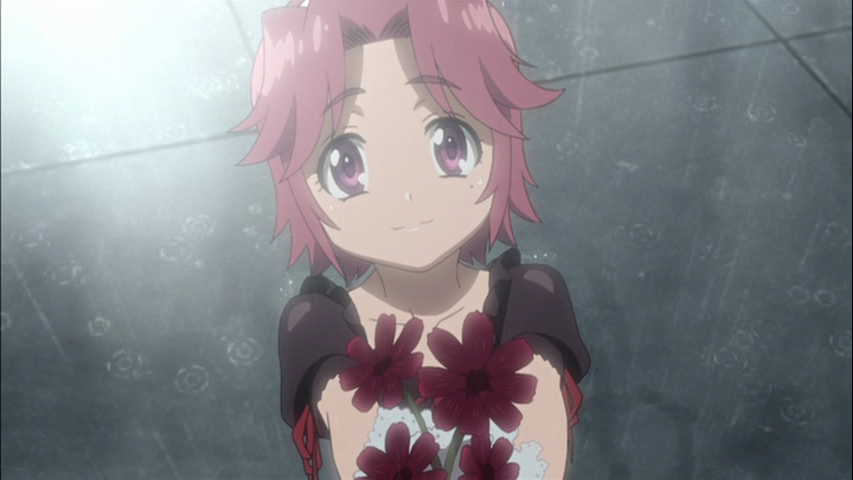 Shorter version...HSOTD is a sucking chest wound of awesome.
Slightly spoileriffic character sketches below the fold.


The characters are actually pretty cool... 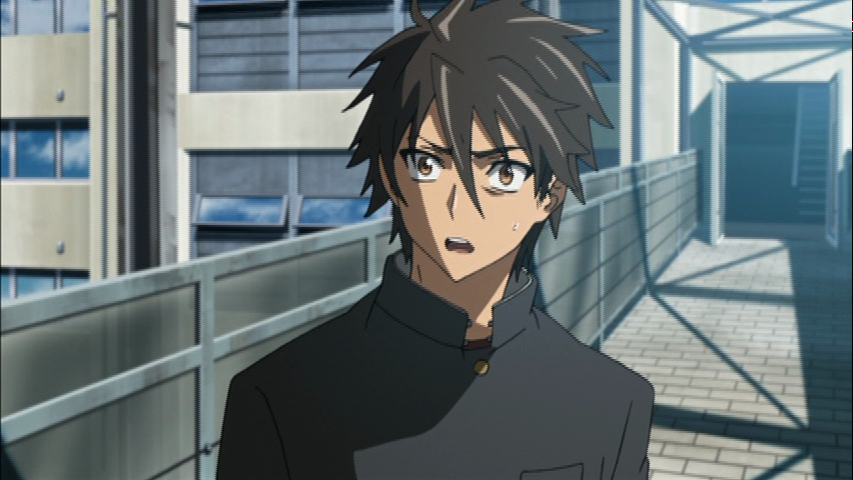 Takashi Komuro: Although he's in as bit of a funk as the show starts, he is one of the first people in the school to grasp what is happening. He tries to warn his friends with mixed results. He has no martial arts skills and so must make due with a baseball bat, which is a messy way of killing things that can only die via beheading. He has a strong sense of ethics. Takashi's best friend since kindergarten has been... 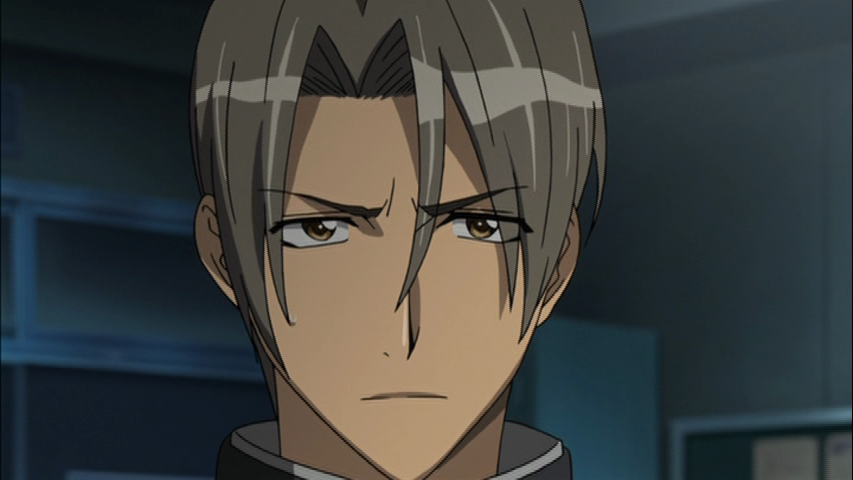 Hisahi Igo:   Like his friend he is physically and morally brave. He is also a black belt in Karate. Their friendship is currently strained due to the fact that Higashi is dating Takashi's ex-girlfriend.... 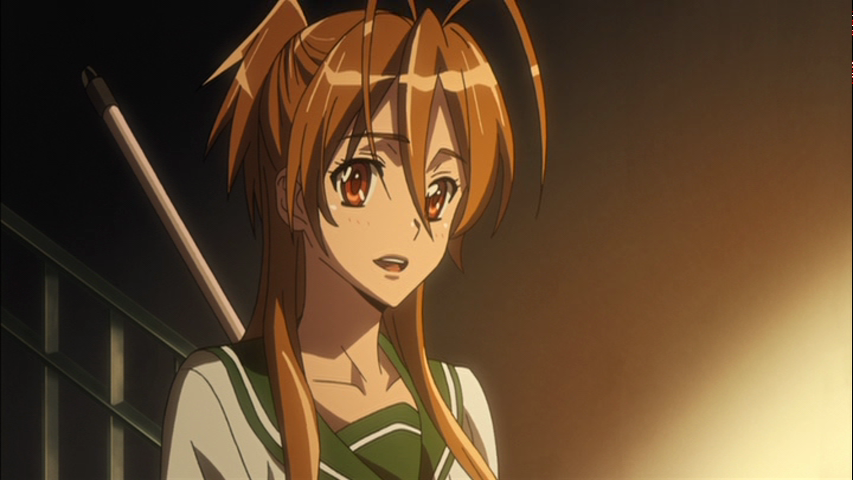 Rei Miyamoto: A policeman's daughter who got into what is a very elite high school via determination and academic excellence. However, circumstances conspired against her last year to the extent that she she is currently repeating the 11th grade. She is Takeshi's former and Hisahi's current girlfriend,  Fortuitously, she is in the martial arts club and a member of the pike squad. She excels at getting all stabby with pole arms which is a rather more useful skill now than it was a few hours ago. She is much more easygoing than.... 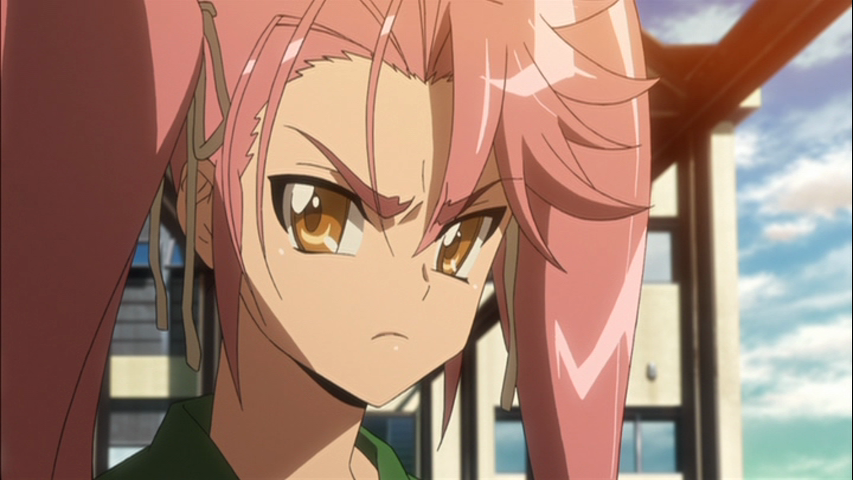 Saya Takagi: The smartest person in the world, whose genius is only exceeded by her magnanimity. She has the misfortune of being surrounded by bonecrushingly stupid fools being stupid (stupidly).
....well...that's how she tells it...
Actually this haughty, sarcastic, braniac, debutante control freak is quite intelligent. She is the first to recognize the true scope of the calamity that has befallen them. She's not really a "people person" though. Saya hates Otaku with a passion...especially fat, introverted, shut-ins like... 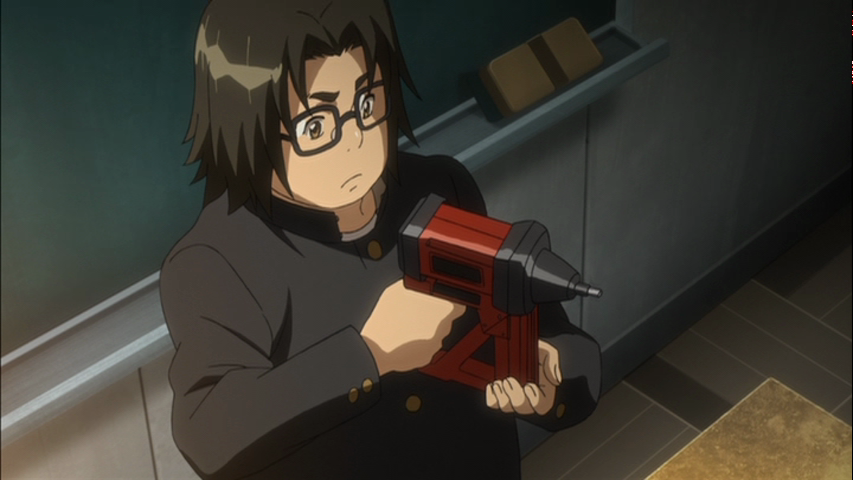 Kohta Hirano: who claims to have (somehow) taken a course at Blackwater in the USA and be an expert in all sorts of firearms...and...umm... stuff.  Although he is in abominable physical shape he can extemporize weapons in the wood shop and he actually is a good shot. Additionally, all those years of playing 1st person shooters have taught him a bit about tactics. He is quite loyal to his new friends but would be by far the weakest link in the group if it weren't for... 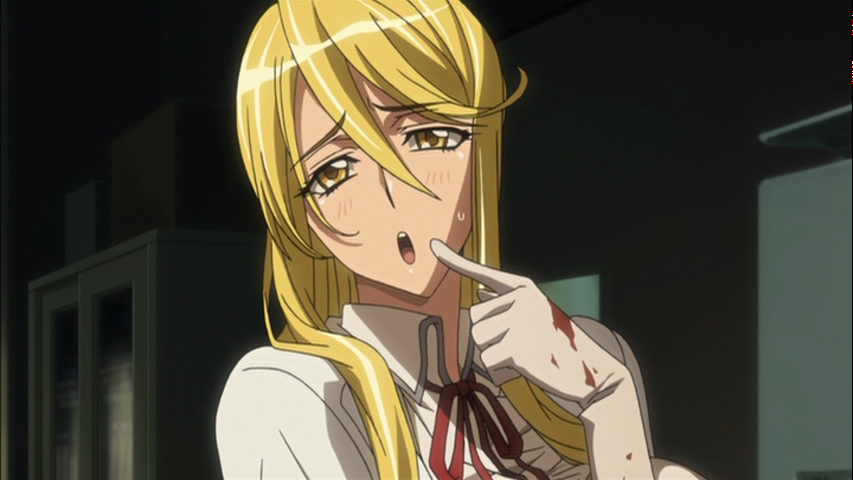 Shizuka Marikawa: The school nurse. She is an urbane, scatterbrained, superficial ditz who is quite out of her depth and has a terribly difficult time getting her head around just how bad things are. As if that weren't enough her voice can grate cheese. She is, however actually a   nurse....and she can drive a stick-shift...which is very important to everyone's survival, so it is darned lucky that she was rescued multiple times by..... 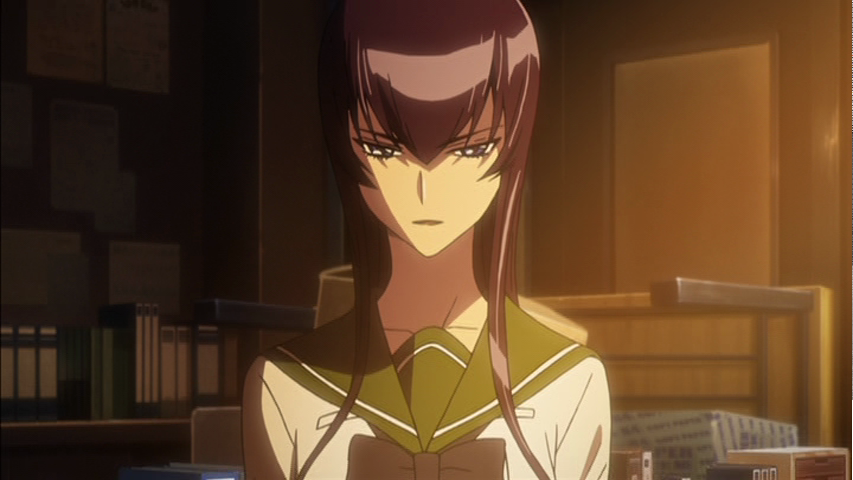 Saeko Busujima: The captain of the Kendo team is cool as a cucumber and supremely skilled with her wooden sword. She moves in combat like a ballerina and does so in a full length skirt.  Level headed and practical, she is an exceedingly honorable person and is the groups best fighter by far. She really is an all-round epic win.

1 Man, the gainaxing in that animated GIF reminds me of Eiken -- and that's not a good thing.

2 Well, the person who animated those breasts at least had heard that they should generally move together, and should eventually stop, things that cannot be said for the wildly independent sloshing blobs of Eiken (the horror, the horror).

No concept of bras or cleavage, and an apparent belief in hidden gears that convert side-to-side motion into perfectly vertical bounce, so the point still stands, of course. :-)


I added a minor clarification.