If Leiji Matsumoto really isn't your thing....GET OFF MY LAWN!

Another english trailer with the French Title(Albator)  here...


A brief report in French on the film.

1 I've never gotten around to seeing the original anime.  A few times when I went looking for it, all I found were what appeared to be sequels.  Is the original version still available?

I am looking forward to this version, though I do prefer my space pirates to be a bit, younger...

While you wait for Mr. Hansen you can watch the whole 42 episode original series on Crunchyroll.  Be advised it is as much a  horror series as it is an adventure series but it's got Kei Yuki in it and she's legal and smart and cute.

3 This Fan film I found linked to the second video seems to have scored some alternate footage, including some closeups of Emeraldis at the 51 second mark.  Never quite pictured her as the latex type, but it's... nice.

4 In the pink skinsuit? No, that's Kei Yuki the ships third officer.

Here she is introducing Tadashi,  (the Audience Identification Character) to the ships cook. 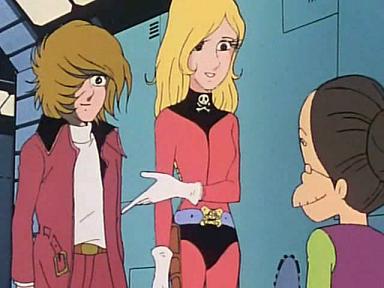 Note that unlike some other shows the male lead gets a skinsuit too. 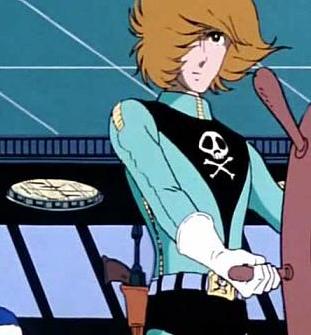 Here they all are asking the important questions 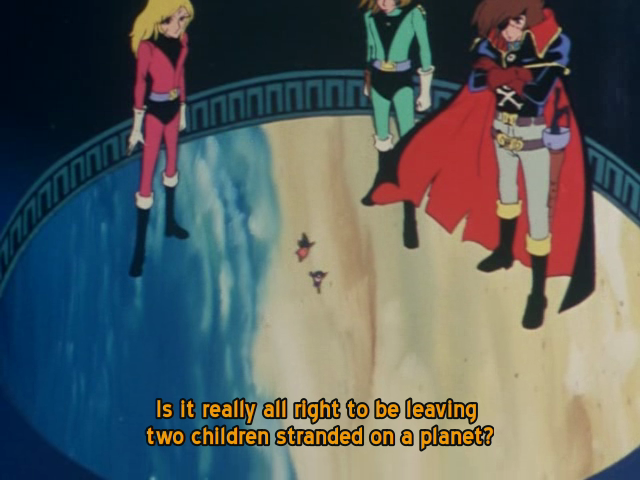 The important answer is "NO!"


Emereldas is  captain of another ship entirely.

Note that except for the last OAV series, which is (sort of) a sequel to the first series, the "sequels" are all actually re-imaginings with completely different universes and similar characters.

5 I've always wondered -- is Kei Yuki from Harlock related to Yuki from Starblazers/Yamato? Or are they just drawn alike?

6 Kei Yuki and Yuki Mori  are completely different and the series are in separate universes. Both women are Matsumoto designs though.

7 Matsumoto is one step above Tezuka when it comes to character design.  And his long and lithe females have long attracted me to his work (although the potato people have a counterbalancing effect).

I've been curious to see his debut work, "Sexaroid", although not because of the title.... well, maybe a little.  But 1969 vintage anime isn't really a hot commodity these days.