Kannagi I just watched Kannagi.
This re-imagining  of Galatea was an above average show, albeit a bit uneven. 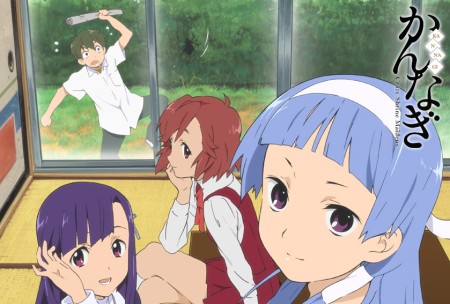 A Shinto shrine on the outskirts of a mid-sized Japanese town has been rezoned and condemned. When the immense tree at the center of the shrine is cut down, the male lead, one Jin Mikuriya acquires a large piece of the tree from which to carve a statue in honor of the spirit the shrine worshiped. The statue comes to life as a vessel for the spirit. Fortuitously, our hero chose not to sculpt a many headed, toothy, squaemous, horror and instead carved a statue of a cute girl. Hijinks ensue...

The production quality of this show is outstanding, the story, a bit less so as it wanders between occult peril and the antics of  Nagi, the spirit, complicating the lives of our hero and his would-be girlfriend. There is fan-service, but, refreshingly, it consists mainly of a lot of references to Otaku culture thrown in by the 2 token geeks.

The story is never actually wrapped up and I get the distinct impression that it was canceled unfinished...14 episodes being an unusual number. The lack of any real resolution and the meandering focus is a bit unsatisfying, especially after a very strong first half.  Nevertheless, it is a cute, and often funny show. I enjoyed it overall. Recommended. 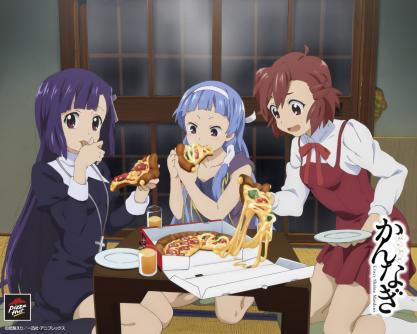 Looks like Kyo-Ani did a cross promotion with Pizza Hut, despite the fact that no pizza is ever consumed in the series.

1 When Yamakan screws the ending of Fractale, are you going to reconsider blaming the cancellation?

2 Nah, these days it's extraordinarily rare for an anime to get cancelled mid-airing like that, and it certainly didn't happen to Kannagi. 14 episodes isn't really that unusual, especially with the last one being DVD-only (as is the case here). See also both seasons of Haruhi (14 TV episodes), K-ON! (13 TV + 1 DVD), Sora no Woto (12 TV + 2 DVD), Elfen Lied (13 TV + 1 DVD), Full Metal Panic! TSR (13 TV + 1 DVD)... you get the idea. I didn't much like the ending myself. Too much angst for this sort of show. First half was quite good, though.

3 Can't agree with the recommendation. Show was uneven as all get out, meandering between rom-com hijinks, otaku references, and mawkish get-over-yourselves-already melodrama. Nothing that hasn't been done before, elsewhere, and better.

It didn't get canceled midway or anything like that, it was just a one-season show that they left open for additional seasons, but thankfully will never see them.

Wasn't even particularly fun to work on. Show thought it was a good bit more clever than it turned out to be.

4 @Pete Zatciev: I'm not familiar with Yamakan. Is the strong opening/ weak finish a pattern of his?

@Andrew F:
I did not know that the last episode was DVD only.That puts a rather different spin on the last two episodes as broadcast. This would have been a pompous, dour and depressing ending  rather than an attempt to get the show back on track.

@ Avatar:
I understand. The recommendation is a tenuous one. Still, the first DVD was excellent and while the second DVD is a letdown, it was merely mediocre, not egregiously bad.  Oh, and I laughed.

I disagree slightly that it was good there was no more of the show.

'cause...I'd like to see more of that show on the first DVD ... you know, the one where the emphasis is on dealing with the need to excorsize the 'impurities' and the implications of these things being caused by the callous machinations of the zoning boards all over the place ...that show where the comedic bits were just comedy relief...with the other goddess being rather more malevolent ...that show on the first DVD, you know, that series that wasn't a harem show, where the characters appeared to learn and grow... you know, THAT show.

5 Brick, Yamakan did some work on Haruhi (apparently he was responsible for the infamous dance ED, and directed a couple of episodes) and then directed Lucky Star... for four eps, then he got kicked off the project and things improved a lot. The only other major works he's directed are Kannagi, and now, Fractale.

He catches a lot of flack because, well, he's a troll. He took getting kicked off Lucky Star personally and since then he's said a lot of stuff that seems to indicate that he thinks he's hot stuff and just unappreciated. Apparently he decapitated a Ui Nendroid at a press conference, too... (er, as an incidental, he didn't call the press conference just to decapitate Ui. I hope!)

6 Oh. OK. Actually, I had heard of his guy I just couldn't remember his name.


I didn't see the problem with the first four Lucky Stars, the differences with the later episodes certainly didn't seem jarring.
(In fairness though, this may be due to the excellent English version.)

OTOH though, even allowing for the fact that most of these stories come through the fan filter, he does seem like a bit of a prima-donna.  Maybe he should just get a job at Gainax.

7 I like Kannagi a lot.  My current desktop is named Nagi...  Though admittedly since my naming theme for my personal computers is schoolgirl goddesses who are the main and titular characters of their own series, my pool of names is somewhat limited.

Yeah, it's uneven.  Maybe if I had to subtitle it I'd have found it annoying, but just watching it normally I found it very engaging.  I'd recommend it too - it's not a classic for the ages, but it's a lot of fun.  And the opening credit sequence is delightful.

8 A lot of the backgrounds were copied from areas near Sendai, the city most damaged by the earthquake.