If True, This Can't be Good... China has reportedly renamed the former Russian Carrier Varyag, * the Shi Lang.

Shi Lang was the Chinese Admiral who captured Taiwan.


Varyag was purchased unfinished with the stated intention of turning it into a floating hotel/casino/ entertainment center....but 'somehow' ended up at a naval base painted in P.L.A.N. Grey with naval technicians swarming over her. 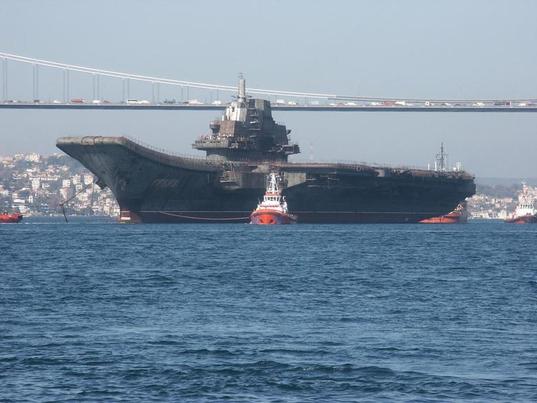 * I can't find a primary source on this.But this thread and the Wikipedia entry list Janes AtWFS 2008.

1 Hmm.  Still has the ski-jump.  I take it they aren't putting in steam catapults?  And that strategypage article suggests that it's a 65k boat, not the originally-planned 90-ish.

Also, are they actually putting a nuke in there?

Seems like an excellent cash-sink for PLAN.  It probably represents at least a squadron or so of subs they *won't* be buying.  And the half-dozen or so cruise missiles it'll take to sink her ought to be relatively cheap for the investment.

The Varyag is a Kuztenov class carrier. They are about 65K tons about Midaway size I think. They were to be succeeded by a 90-110Kton nuclear powered successor. That was cancelled, though Russia is reportedly now planning to build 6-7 updated versions of that class. Russia has learned a lot from operations with the Kuztenov and will apply many of the lessons learned there.

Regards China. A carrier is a good thing for power projection, both hard and soft and is quite useful in providing air support for...say...an amphibious landing of some sort. Carriers ae not invulnerable, but they are tough and I imagine the waters on the shoreside of Taiwan are littered with seafloor sonars and would be absolutely filled with SSKs to protect the carrier/s.

This is certainly not a wonder weapon and as you correctly point out detracts from their SSK/SSN program . However, it is not without its benefits to the PLAN, nor should it be viewed with a total lack of concern by us.

I don't know that Russia learned anything from operations of that ship, because it never reached active service.

And I disagree that this carrier would be of any significant aid to China in some sort of planned invasion of Taiwan. (Which is not militarily plausible anyway, for at least six reasons.)

4 This carrier is the second of the class and incorporates lessons learned from the first (the Kuztenov). That vessel did enter service and is still in service today.

I would be shocked if there were an invasion of Taiwan in the very near term but it might in the long. China believes that it doesn't need to defeat the US militarily, just sink a carrier or two. They have watched the US reactions to combat losses since Viet Nam and are sure that the anti-war crowd will declare defeat if given a sufficient bloody nose. As far as doctrine, they been very open about banking on the left and the media to declare a rout in that case.

To that end they are investing heavily in ssk's and ssn's as well as missiles and mines to make the vicinity of Taiwan a hellish place for a ship to be. Taiwan is as you quite rightly say, a very tough nut to crack, but it is not unbeatable without outside assistance and its being  made part of the mainland is very important to their national self image as far as redressing the Tang era  setbacks which was a national shame for the worlds oldest civilization second only to the horrors they suffered under the Japanese. (Another obnoxious thing on their  'to do list' is the utter extermination of the Japanese people...which I have little doubt they would do if they thought they could  get away with it)


I am unsure that they are right about the US reaction to a bloody nose.
The US, because of our current red blue divide. tends to be rather bipolar in policy, but 10,000 sailors dead in a sea battle against the tyrants of Tienanmen might well  provide  the  Chinese with a rare and painful demonstration of American unity.

Mitch, the carrier catapult is actually a technology that's VERY hard to successfully implement, and pretty much requires a large carrier to use.

When you mix the tech problems with the ship size difficulty, for most fleets a skijump is the way to go.

6 I've read Russian reports about the last cruise of Kuznetsov. They were brimming with pride for not losing a single aircraft to accidents this time around despite flying more. So obviously lessons were learned, at least to a degree. If those lessons would be useful for anything remains to be seen.

I did not serve really, but was assigned to Air Defence Forces. Old-timers who knew others who went to Vietnam griped that lessons from Vietnam were never applied across the force. They were talking specifically about mobility and SEAD resistance. Apparently all units rotated from USSR to NV were taking serious losses every time before adapting and starting fighting for real. Russians have amazing ability to ignore lessons. There was just no culture of taking training seriously, at least back then.

The problem with a ski jump is that it requires you to use STOL jets, thrust-vectoring. That's because there no way for any jet to get up to air speed in such a short distance using its engines alone. You have to vector thrust somewhat downward to compensate.

There are good sides and bad sides to thrust vectoring. One of the bad sides is that no thrust-vectored jet in the world can go supersonic, as far as I know. That's not a problem for ground support, but for air superiority it's a considerable disadvantage.

Of course, it depends enormously on who you're up against. The Brits did fine with a handful of Harriers against Argentina in the Falklands War. But against an opponent, oh, say, just picking "Taiwan" at random, there's no way such jets are going to be able to compete against Taiwan's F-16's and Mirage 2000's.

It would seem I'm not quite right. Apparently thrust vectoring is more common than I realized. The F-18 has a form of it, for example, as a means of improving maneuverability.

What I was talking about isn't the ability to redirect the thrust ten or twenty degrees, which is what that jet has. I meant the kind that the Harrier has. I'm still pretty sure that jets like that cannot go supersonic.

Not so, Steven.  The Kuznetsov embarked the Su-25 attack plane and the Su-33 (the naval variant of the Flanker, with canards for additional lift).  Neither has any thrust vectoring capabilities.

The main limitation of the skijump is that a plane generally can't operate at full load.  In some ways, though, skijumps are actually easier on the plane and pilot.

Of course, the Kuznetsov-class is sort of an "in-between" carrier design, larger than a Brit Harrier-carrier, and smaller than the French CVNs, so one would expect it to operate differently...

10 Kustenov is bigger than the French CVN it. It is a very capable ship despite some design oddities and inexperience in the field.

Regards the vectoring of thrust, the ramp points the nose of a plane up and therefore its tail down....thus vectoring the thrust. They work fine with conventional jets and have no moving parts. They are not as versatile as a catapult and a cat cant be fitted in one but they are a perfectly acceptable solution within their limits.
eg: India will operate conventional aircraft off of its 2 new small carriers using ski jumps.

Kuznetsov maybe be physically bigger than the French CVN, but it carries a smaller fixed-wing air group, which should be the whole point of a carrier.

Of course, the Russians don't call the Kuznetsov-class an aircraft carrier, but a "heavy aircraft carrying cruiser."  Really, the fighters are there to protect the ship while it gets into range to launch its shipborne missiles.

Strange by our Navy's way of thinking, but...

Wikipedia says the DeGaulle has catapults and carries 40 aircraft including helicopters.

It says the Kuznetsov carries 21 fixed wing aircraft and 20 helicopters.