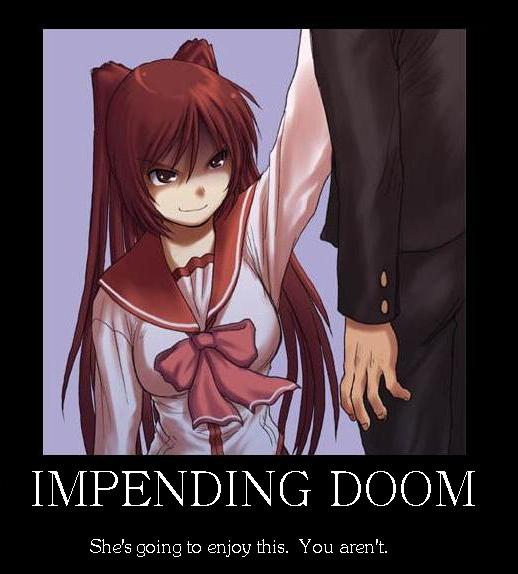 It's Sarah and John!
(New campaign motto: "Come with us if you want to live!")

UPDATE 3: The Anchoress has put together everything one needs to know about Palin-noia.

The 'Phibian wins the betting pool.

I didn't think he would do it but I am VERY happy that he did.
Palin is awesome, a highly principled individual who as a legislator resigned in protest of party graft in Alaska. She ran a dark horse, anti-establishment campaign rather cut off from party support and won the gubernatorial nomination by sheer competence and public appeal. She has been very reform oriented as Governor and quite successful at it.

If this is not disinformation it is great news.

I'm off to school.

UPDATE: Happy Dance!
It was not disinformation. Sarah Palin is the Republican Vice Presidential  candidate.

I saw her acceptance speech at school. It was most impressive. From a perspective of principle, achievement and competence she is hard to beat. This was my dream Veep candidate. I really did not think he would do it. Palin is also one of the more Libertarian Governors out there (an unsurprising thing coming from a frontier state).

Galrhan has taken a short break from defense analysis to post some thoughts on the election in general and they do ring true....particularly this bit:

We have two very interesting tickets, but they both tell the same story. The United States of America is the greatest country in the world, and the lives of all four candidates combine to represent and reaffirm that reality.

I would point out that Governor Palin's foreign policy experience, while admittedly quite sparse, is not actually zero. She worked with Canada to get the recently started natural gas pipeline approved. She has probably had some dealings with her Russian counterparts regards fisheries and attempts at cooperation in search and rescue matters. All governors have a certain amount of hands-on negotiation with foreign countries on trade, educational and occasionally environmental matters.  Significantly, what little foreign policy experience she has has been practical, rather than theoretical.

Obama would be very unwise to mock her lack of experience given his exceedingly thin resume. Oh wait.

Yet more on Governor Palin, this time from a libertarian perspective, here.

UPDATE2: Hah! Steven DenBeste points out a significant Palin characteristic that everyone else is missing, and the potential that this has in swaying an unappreciated demographic. He's closed comments to avoid those with biocular insecurity so feel free to comment here.

UPDATE3: Holy Carp!
Note: .Gifs are for celebratory purposes only: No endorsement of McCain/Palin by Mr.T, or the creators of Windows 95 and Hidamari Sketch should be inferred from this post.

Respite Because whatever differences one may have with Obama tonights nomination is indeed a great moment for this country.

A Few Thoughts From Around the 'Net on the Benevolent All Caring God Head Sun King There is an ad being circulated by friends of McCain that has the Obama team rather miffed. They are asking their supporters to pressure advertisers and boycott the stations that run it. This is a perfectly legit tactic in a republic. However, Obama is also trying to get the Justice Department to take legal action against stations and the originators of the ad. Now while there is a certain poetic catharsis in seeing Mr.Campaign finance reform getting gigged in this way, it is still troubling, especially since Obama (who has forgone federal funding) is pushing the envelope on this even by the standards of McCain Feingold. Nor is this the only example of the DNC flexing its censorship muscles this week. I've long held that the modern left is far more likely than the right to silence those that disagree with them.

So here, via Instapundit... and utterly out of spite...is the ad the Obamatons don't want you to see.

As you can see, Obama's response is basically along the lines of "Ayers did his bad deeds a long time ago, I denounced them (when it became an issue) can't we just move on?"

If McCain were hanging out with Eric Rudolph...would they be saying that?
No.
Is this an unequal comparison?
No.
Ayers is not just a terrorist and a traitor, he started a terrorist organization, admired the Manson "family" bombed the capitol and the Pentagon and terrorized the citizens of the US.
Read about the bastard here.
Amongst his lesser crimes...

Ayers was an active participant in Weatherman's 1969 "Days of Rage" riots in Chicago, where nearly 300 members of the organization employed guerrilla-style tactics to viciously attack police officers and civilians alike, and to destroy massive amounts of property via vandalism and arson; their objective was to further spread their anti-war, anti-American message. Reminiscing on those riots, Ayers says pridefully: "We'd ... proven that it was possible -- we didn't all die, we were still there."

So much for the politics of hope.
Ayers is the lowest form of scum. Obama got his political start in Ayers living room, was mentored by him and has served with the murderous twit in various political and activist capacities. To denounce the actions of the guy,(when it became an issue),  when Ayers is most decidedly unrepentant and still work with him is a thin rebuttal indeed.

A larger, more disturbing point is raised here by Jonah Goldberg (via)

I am amazed, simply amazed, at the amazement of many liberals that Ayers and Dohrn should matter to anyone.

This goes to the heart of why the modern left is actively scary....and why they can't see that they are. They see nothing wrong with associating with a terrorist if the terrorist was a leftie...and they are so detached, ethically bankrupt and provincial that they cant see why this is an issue.

Now to be fair this fairly strong connection to Bill Ayers actually reinforces Obamas rather nebulous claim that he'll bring about the agent of "change".
Ayers again:

"Kill all the rich people. Break up their cars and apartments. Bring the revolution home, Kill your parents."


Yes its CHANGE!
The McCain ad on Ayers is perfectly legit in the questions it asks. It is up to Obama to answer them to the voters satisfaction.

UPDATE: As I typed this Obama and the DNC have skipped the floor vote...which might have been, you know, close or something....and decided to just declare the Benevolent All Caring God Head Sun King to be the Lord Protector nominee.

1 I know you meant to reference an "Obama-Acropolis", but that looks more like "Obama-necropolis", which weirds me out.