Well Then I guess I need to state a few things.
2+2=4
1984 is not a how-to manual.
News outlets do not determine elections.
However, the election is NOT quite finished yet.
There is a very slim chance that Trump might still pull this out.
That chance is slim but not zero.
It is also worth pursuing for the simple reason that it is the right thing to do.
There are legal proceedings (quite proper IMHO) seeking to determine the propriety of the elections.
Biden, is, therefore, NOT the President president elect (yet).
I think that it is likely he will be, but I also think it is important to fight that result until the bitter end.
And I'm not ashamed of that.
There actually is some evidence of mayhem in the vote-counting in this election.
And I do not have any shame about saying that.
If the election does not go my way, I will NOT Burn, Loot, or Murder as a result, for I am not a Democrat.
I say all this because of a particular tweet. 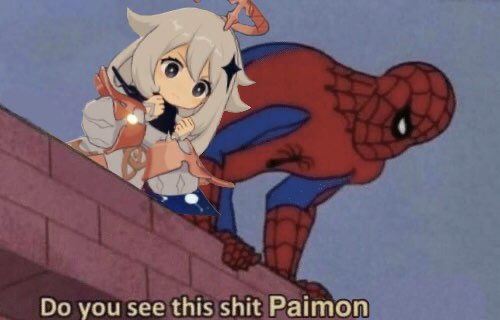 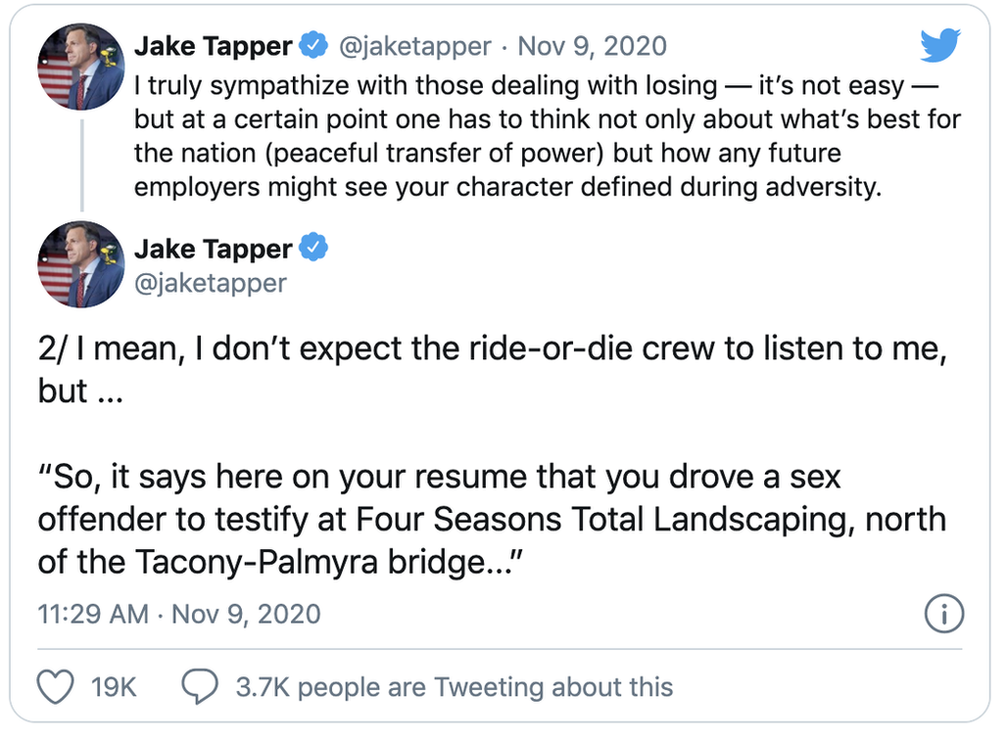 Nice life ya had there hick...too bad ya didn't just look the other way...
Obviously, that's good advice what with lists being made and all. If I keep my mouth shut and say nothing, then perhaps they'll ignore me if they come for the Jews, or the Catholics.
So really, the smart thing is to refrain from making waves, which I would urge people with children to seriously consider.
But I'd rather lick doorknobs in Wuhan.
This is not a political blog, but I will use my modest, Z-List platform to, from time to time, push back against the Biden/Harris administration which looks to be being staffed with creepy and destructive people. 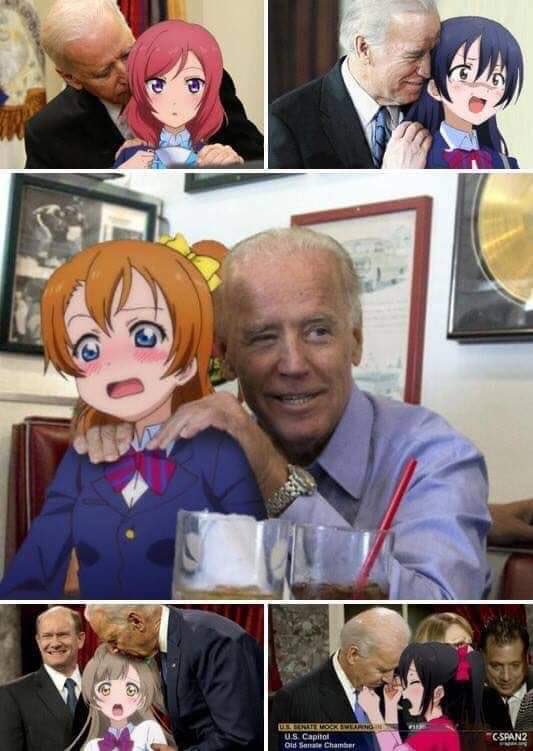 To Wit
Heck, I might even, given some bizarre set of circumstances, defend the currently presumptive administration as I occasionally did Obama during Biden's tour in the Naval Observatory.
But I won't be taking Mr. Tapper's ever so 'considerate' advice.
I'm 50. I'm single. I'm not an imposing human being, but I believe in America, free speech and, fanboy that I am, I am nevertheless adult enough to understand that words are not violence, they are the best way to avoid it.
I also possess a history degree, and looking back on the 20th century I've gleaned that when they start coming for those who are different or express an unpopular view, silence is unlikely to guarantee one's safety, or produce any good result.
I do NOT condemn those in precarious position or whose jobs well and truly depend on their silence. We all have to eat. But those of us who do not have family to care for and are not required by our jobs to remain silent on social media probably should step it up a bit.
One other thing:
I am neither stunning, nor brave. I shout to the four winds as anonymously as I can, and I do that because I'm not on the book of Faces or the Twit roost.
No, I blog at Mee.nu.
Now, my only connection to my blog's hosting service was as an unpaid Beta tester years ago, but I do think that perhaps now would be an excellent time for people switch to a social media platform that believes in free speech and won't report you to the Marquises of Palo Alto  (or the Gab junior puritan brigade).

1 I will defend people against accusations of being Nazis right up to the point where they march under a Nazi flag...  Or start talking about putting the supporters of their political rivals on a list for retribution.

I've Got to go to Work But this may be a leading indicator.
The Yuan is tanking. Apparently the CCP is suffering some sort of reversal as of 23:21 Tuesday evening. 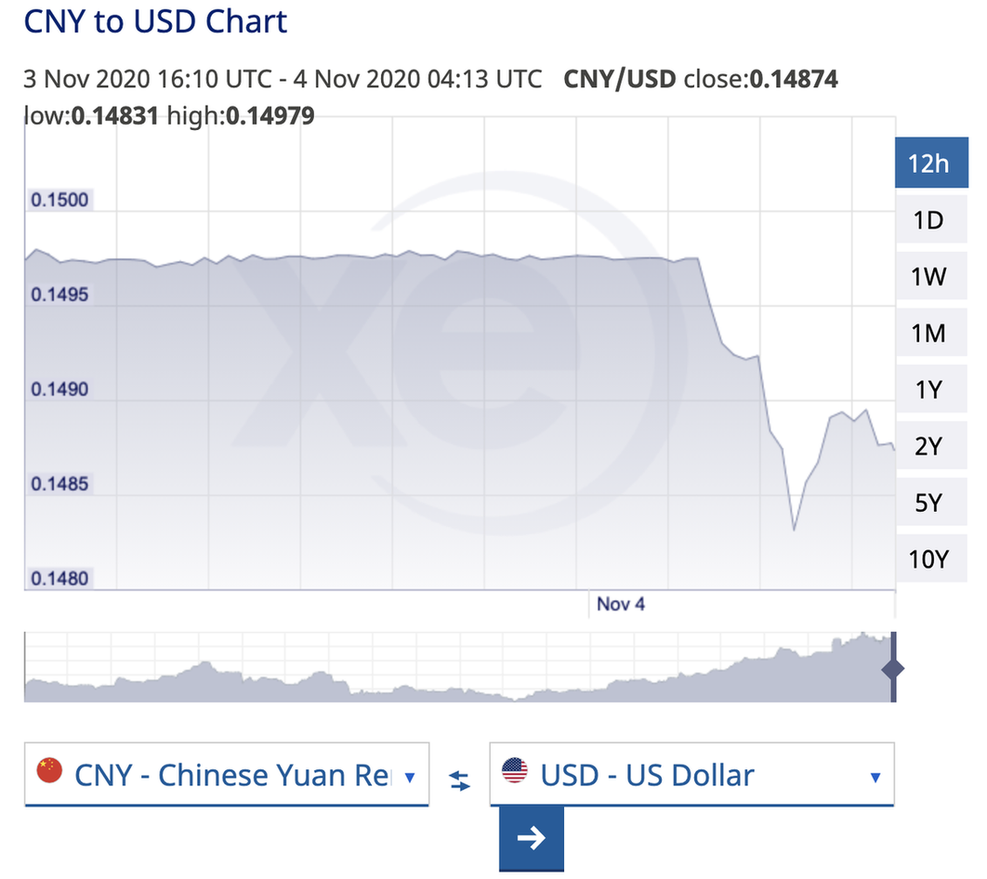 1 It was apparently a 1 day blip, as the renminbi is back up and actually still trending higher. It's a little over 15 cents today.

2 Yeah....they had much more hope this morning.

3 All I know now is that Taiwan is probably screwed.

Golly Aside from two or three midterm elections and a similar number of primaries, I have missed zero elections since 1988. I don't think I've EVER seen a line quite as long as the one I stood in this morning, except possibly 2008.

The fellow behind me had had to leave and get additional clothing earlier in the morning (It was quite cold and windy) He noted that the line earlier had been longer still and gone completely around the school.
The line was so long that it extended far enough out that city council and school board candidates could legally pitch themselves to voters in line, which they did with much verve and enthusiasm. I found this welcome since it is terribly hard to find out anything about city council or school board candidates who are, by law, not allowed to express a political affiliation. This is he first time in years that I've voted for local offices and not felt that I was just throwing darts.
The line, for all its length moved quite fast and I was out in just over an hour.
In stark contrast to the acrimony we see on the news, everyone was civil, pleasant, and supportive of everyone else doing their civic duty, and it was a very diverse crowd, with people of all ethnicities in outfits ranging from suits to coveralls.
Now.....we wait.
(And wait and wait and wait, since, according to the radio just now,  Governor Moloch McBlackface has said that the state will count ballots that come in by....Friday*. )
*A quick web search turned up nothing corroborating that, but it may be breaking as I type this.

1 It just occurred to me, but didn't the Bolsheviks of the Virginia state government change the law so that the state's electoral votes are given to the candidate that wins the national popular vote?

When the Crash WAS Your Fault 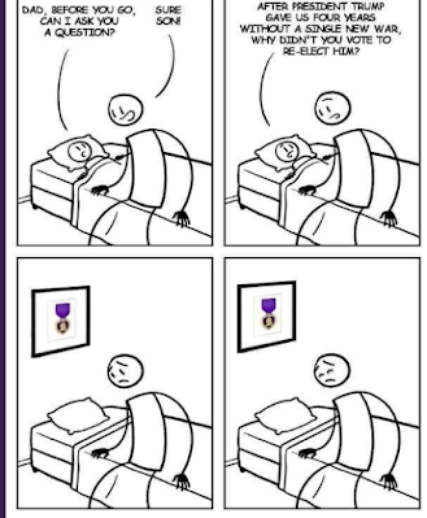