Some Damn Fool Thing About an Old Property Lease The Diplomat reports on a strange international legal situation that could add yet another complication to the Balkans-in-1914-like conglomeration of conflicting interests, unclear jurisdictions, centuries old grievances, ethic hatreds, overlapping/contradictory treaties and great power intrigue that is Southeast Asia.
The issue has its origins in a 1658 agreement by the  ">Sultanate of Brunei to cede the province of Sabah to the Sultanate of Sulu as compensation for Sulu's assistance in putting down a Bruneian revolt.
This was somewhat complicated by an 1878 agreement with the British Empire to lease the province... a contract which was continued by the Malaysian government who continued to pay the modest stipend to the heirs of the long defunct Sultanate of Sulu after the country gained independence from the Brits.
The Sultanate of Sulu covered northern Borneo, islands in the Sulu Sea and the southern end of Mindanao, today the southernmost big island of the Philippines. 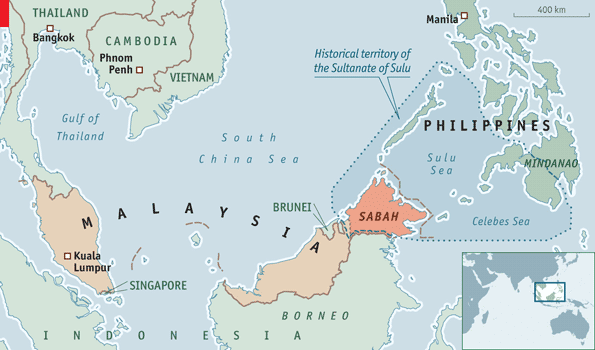 The Sultanate of Sulu was the focus of considerable ire from the Spanish who, having claimed the Philippines, did not recognize their territorial claim over  those islands. Sulu never actually signed a treaty of surrender however and when the U.S. acquired the Philippines in 1898 the centuries old conflict was still going on in the region known as Morro. The U.S. DID get a treaty from the last Sultan of Sulu in 1915, ending the bloody 'Morro Rebellion' and the last reigning Sultan retreated to Northern Borneo where his remaining lands were subsequently incorporated into British possessions there.
The area became part of Malaysia when that country gained independence but the lease continued to be paid to the heirs of the Sultanate....
Well...until 2013 when the heirs of the Sultanate of Sulu started an insurgency that killed at least 60 people in the province of Sabah. Given that this was an attempt by terrorists to re-establish a defunct Sultanate the Malaysian government put a stop to the payments to the family.
From here it gets....complicated.
Because the Sultanate of Sulu had a large par of their historical territories in the Philippines, the Philippines, for most of their existence as an independent country laid claim to Sulu's historical territories in what is now Malaysia including Malaysian islands in the Sulu Sea and northern Borneo. (Note that the U.S. never made this claim)
The Sultanate of Sulu was somewhat at odds with the other Islamic Kingdoms in the area because their interpretation of the Koran was....less nuanced... than the other, comparatively moderate Sultanates in the Southeast Asian archipelago. Their beliefs seem to be somewhat similar to the Whahabists of the middle east.  Note that at least one of the Morro factions in the Philippines (which even today are waging a nasty insurgency there) aligned themselves with ISIS a few years ago. The Morro themselves, as mentioned earlier are a Sulu remnant who never accepted the peace treaty.
The heirs to the Sultanate of Sulu consider the Government of Malaysia, to be too moderate to be a legitimate ruler of Muslims.
Thus, when the heirs to the old Sultanate made their putch in Malaysia in 2013 the Malaysian government naturally cut off payments to them.
Which is where Luxembourg gets involved.
The Petronas corporation, Malaysia's big oil conglomerate (you may have heard about a couple of their buildings) holds the actual lease at the crux of all this. Well, the company was just taken to court by the remnants of the Sultanate of Sulu...in, uh, France. There it was found that was found that, Petronas Corporation, by complying with Malaysian government, had unjustly denied the heirs to the Sultanate of Sulu the approximately $5,300 annual stipend that had been promised them by the British in 1878 and grandfathered in upon Malaysian Independence. Thus they were awarded 14.9 B...B...Billion and their subsidiaries (which were registered in Luxembourg) have been seized.
So:
Let us review:
A group of heirs to a defunct kingdom with territorial claims that overlap two countries and known ties to Islamic extremists as been awarded almost 15 billion dollars because a company stopped paying a $5,300/yr lease the company inherited from the British after the government asked the company to please not fund terrorists.
15 billion will buy a lot of suicide vests and other kit, but there are more troubling implications. It appears that the remnants of the Sultanate of Sulu, in addition to insurgents and suicide bombers, possess a weapon that is singularly formidable and heretofore not thought of as a large part of their arsenal.
Lawyers.

1 While the things are hear about are undoubtedly a filtered sample, I can't recall a single instance where a French court has made a newsworthy decision that didn't fall into the "what alternate reality are they living in" territory. I'd love to hear the reasoning on this one. Starting with why a French court is involved in the first place. I assume it's just a "universal jurisudiction" thing.

2 Lessons learned children? When dealing with conquered Muslims, do unto them as they do unto those they conquer: No Muslims, no problems.