So, What About Those Fishing Boats The Chinese media is claiming that the fishing fleet that left for the Senkaku Islands mentioned in this post was apocryphal.

Information that a large number of Chinese fishing boats are heading for the Senkaku Islands in Okinawa Prefecture is false, the chief of a Japan Coast Guard office in the southern prefecture said Tuesday.

It seems that a fishing season opened which much like the Alaska season involves a mad dash to sea, that this happened in the middle of the current crisis was run with by the press.

Note that this is a Chinese newspaper and I'm not hearing this anywhere else yet so take with adequate salt.

Indeed, Asahi Shinbun is reporting that the Chinese are keeping several patrol boats and several hundred fishing boats "in the vicinity of" the Senkakus. This means that they are not there now, possibly over the horizon, but could rush the islands at any time.


A senior official of the Japan Coast Guard said the agency was already braced for a more aggressive maritime offensive from China, considering the moves it has recently taken.

"We need to deal with it,” the official said.

The primary duty of fishery monitoring ships is to prevent illegal operations by fishing boats.

But a source close to the Japan Coast Guard said the reality is different. The source said Chinese fishing boats tend to move upon the instructions of a monitoring ship.

"With a single command, fishing boats could head southward (to the Senkakus) all at once,” the source said.

The Japan Coast Guard has assembled 50 patrol boats around the Senkaku Islands in case Chinese government ships or fishing boats enter Japanese territorial waters. Many of the vessels have been sent by regional coast guard headquarters across the country.

If there's a war, the first battle will be fought by the respective countries Coast Guards.

This could turn into a HELL of a real mess real quick.

The JCG is a crackerjack service but coping with hoards of civilians who cannot be harmed but must not be allowed to land while dealing with warships is a thorny problem.

One dead fisherman and China might claim causus belli.

This is a dreadful situation that could spin completely out of control either by an error or a simple boating accident.

As for China's domestic situation, nothing I'm hearing is good.

Then there is this.

The secret of brinkmanship is to stop short of the brink. The danger is that the ground can shift as one stands on the edge. That happened one August 98 years ago and did not work out well for anyone involved.

Meanwhile... While the Arab world burns, the China/Japan dispute over the Senkakus is heating up.

Japanese factories in China were shut down yesterday as the anti-Japanese riots escalated. More here and here.


Meanwhile 1000 Chinese fishing boats are sailing to the Senkaku Islands and daring the Japanese Coast Guard to stop them.

More on the Senkaku dispute here and here. Scary stuff.


All this is happening as Chinas's prospective leader remains missing.

There's a lot more here and here over at Ampotan which is covering the situation via the local media.

Their coverage includes this interesting tidbit... 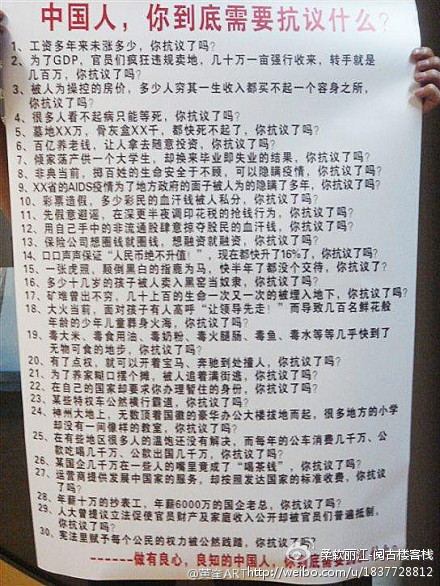 This photo appeared on Weibo, the Chinese Twitter. Photographs such as these don’t last long on the Net in China. It reads: Chinese people! What should we oppose? No wage increases. Public officials make large profits from illegal land transactions. We can’t buy a home. We die because we can’t go to a hospital. We can’t die because graves are too expensive. We use all our assets to graduate from college and still can’t get a job.

There are 30 grievances in all. I don’t see any about the Japanese.

There's a bit more going on than just a territorial dispute, but the mobs anger is a monster not readily put to sleep once awakened.


...and this is possibly the most chilling quote...


"The Mao Zedong era was better, because most people were equal. The methods of the current government are ugly.”

If that's a common attitude, then he and others may indeed discover the true meaning of ugly.

It's traditional in totalitarian states when the peasants start grumbling to try to rally them by picking an external fight. E.g. Argentina's periodic attempts to take the Falkland Islands.

With the world economic slowdown, which is finally affecting China's internal economy, I wonder if that's what's going on this time. The Senkaku islands would make a perfect distraction.

A revolution in China right about now would be pretty terrifying. But there's never been a totalitarian government which built a large bourgeois class and didn't eventually face revolution from them. (Contra Marxist ideology, revolution is a sport of the bourgeois. The proletariat never revolts.)

2 Part of the problem is that the legitimacy of the Chinese government is wholly wrapped up in economic advancement.

"Legitimacy", in this context, is the perception among the public that the government has the right to rule. This runs very high in, say, democratic countries right after election time, when the government can point directly to the election results as evidence of the mandate of the electorate. It runs very low in totalitarian nations that have just suffered a coup, since that drives home the notion that the man on top is only on top by the power of shooting anyone who disagrees. (By contrast, a totalitarian government can have high legitimacy if the people believe that government policies are an expression of their own desires... for example, Nazi Germany around 1937.)

China's original legitimacy stemmed from promulgation of the Communist revolution. That's dead, dead, dead these days... but nothing much has come to replace it either. China's still ruled by a nominally-Communist party that, in practice, is turning into a hereditary oligarchy of party officials. The adoption of capitalism has helped soften that a lot by providing good economic growth, and nothing puts off revolution like today being measurably better than yesterday. This is especially true when the freedoms that are thereby restricted were never really enjoyed by the Chinese to begin with...

But without that economic growth, people have a greater incentive to take a close look at the governance of China, and that is an ugly thing to look at these days.

Can China whip up enough anti-Japanese sentiment? They can't actually go to war with Japan, because that brings in the US. More to the point, China needs Western markets more than Western markets need China. If things get sufficiently bad there, retaliatory tariffs have the potential to gut the Chinese growth engine and kick off precisely the kind of unrest that the Chinese government is trying to prevent with their jingoist nonsense...