GunRunner When I first heard about this I thought I had to be hearing it wrong. It is after all insane. 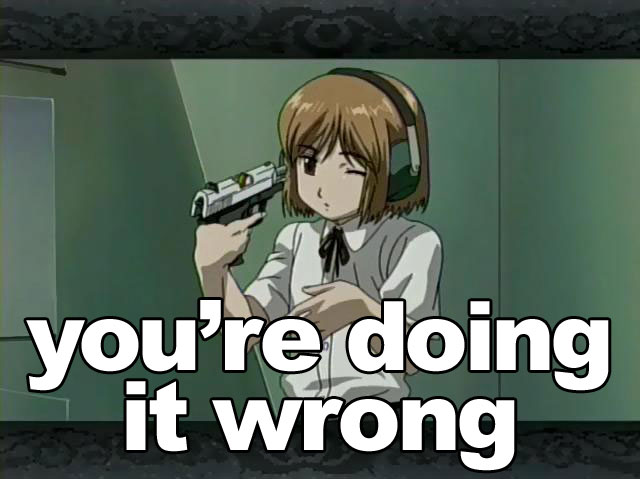 It also appears to be true.

Here is what appears to have happened as I understand it.
1: The ATF is informed by several gunshops of several suspicious individuals believed to be straw purchasers.

2: The ATF tells the gunshops to sell firearms to the straw purchasers as they are going to set up a sting.

3: The ATF funnels 2000+ weapons into the hands of Mexican Drug Lords....but skips the actual "sting" portion of the plan.

4: Hundreds of Mexican troops, 2 US Border patrol agents and an unknown number of civilians have been slaughtered as a result...but its OK because.....ummm...the ATF is...

This is where my understanding ends because the ATFs "plan" seems completely blinkered.

No really. The business plan of the underpants gnomes  made more sense (at least they had underpants they could liquidate at some point).


Senior agents including Dodson told CBS News they confronted their supervisors over and over.

Their answer, according to Dodson, was, "If you're going to make an omelette, you've got to break some eggs."

...the HELL!?!
This Walter Duranty quote is something a comic book villain would say, so perhaps he's paraphrasing....
Oh...
wait...
Ace is on the case and directs our attention to page 38 of this congressional report.

B. "You Need to Scramble Some Eggs"

According to the ATF agents, their supervisors in Phoenix were sometimes shockingl: insensitive to the possibility the policy could lead to loss of life. Agent Dodson explained:

Q. [S]omebody in management . . . used the terminology "scramble some eggs."

Q. If you are going to make an omelette you have got to scramble some eggs. Do you remember the context of that?

A. Yes, sir. It was — there was a prevailing attitude amongst the group and outside of the group in the ATF chain of command, and that was the attitude. . . . I had heard that . . . sentiment from Special Agent [E] Special Agent [L], and Special Agent Voth. And the time referenced in the interview was, I want to say, in May as the GRIT team or gunrunner initiative team was coming out. I was having a conversation with Special Agent [L] about the case in which the conversation ended with me asking her are you prepared to go to a border agent's funeral over this or a Cochise County deputy's over this, because that's going to happen. And the sentiment that was given back to me by both her, the group supervisor, was that. . . if you are going to make an omelette, you need to scramble some eggs.

So..it was not an uncommon sentiment.

The Ace of Spades post is worth reading in full. He amended it several times because, like me, he was finding it had to believe that it was this crazy.
...but now we have super-villain monologing from a 'Special Agent Voth'. This ought to be the plot to a "B" movie but it is damned real to the families of the agents that have died, and the hundreds who have lost loved ones south of the Rio Grande.

If this is half as bad as it seems it is one of the worst scandals in US history. (Remember, Watergate didn't kill people).

There is a roundup of  links on this from the last several months here.

This whole thing is appalling....but if Mexican reporter Anabel Hernandez is right it might be even worse.

I've been fearing Mexico might go over the edge for some time. I did not think we'd be pushing them.

One theory is that this was a false-flag operation to create evidence that would support gun control.

It has long been a leftist talking point that "most of the guns being used in Mexico are coming from the US", which was being used to argue that gun sales should be severely curtailed and subject to all kinds of limits. Problem with it was that it wasn't true.

So the theory goes that they decided to make it true.

If so, they were blitheringly stupid, but at least it makes some sense. I don't know if it's the case, however.

2 Yeah, I've heard that too. I've tended to dismiss it as too conspiratorial....and yet....
The scary thing is that that is the only thing that makes this horrific fiasco make any sort of sense....Of course this 'Reichstag fire' theory is actually scarier than if it was just incompetence.