A Less Than Comprehensive Selection of First World Problems... ...lurk below the fold.
For those disinterested in an old fat guy's first world problems here's the exact opposite; a cute girl, walking home from school, carefree in Penang. 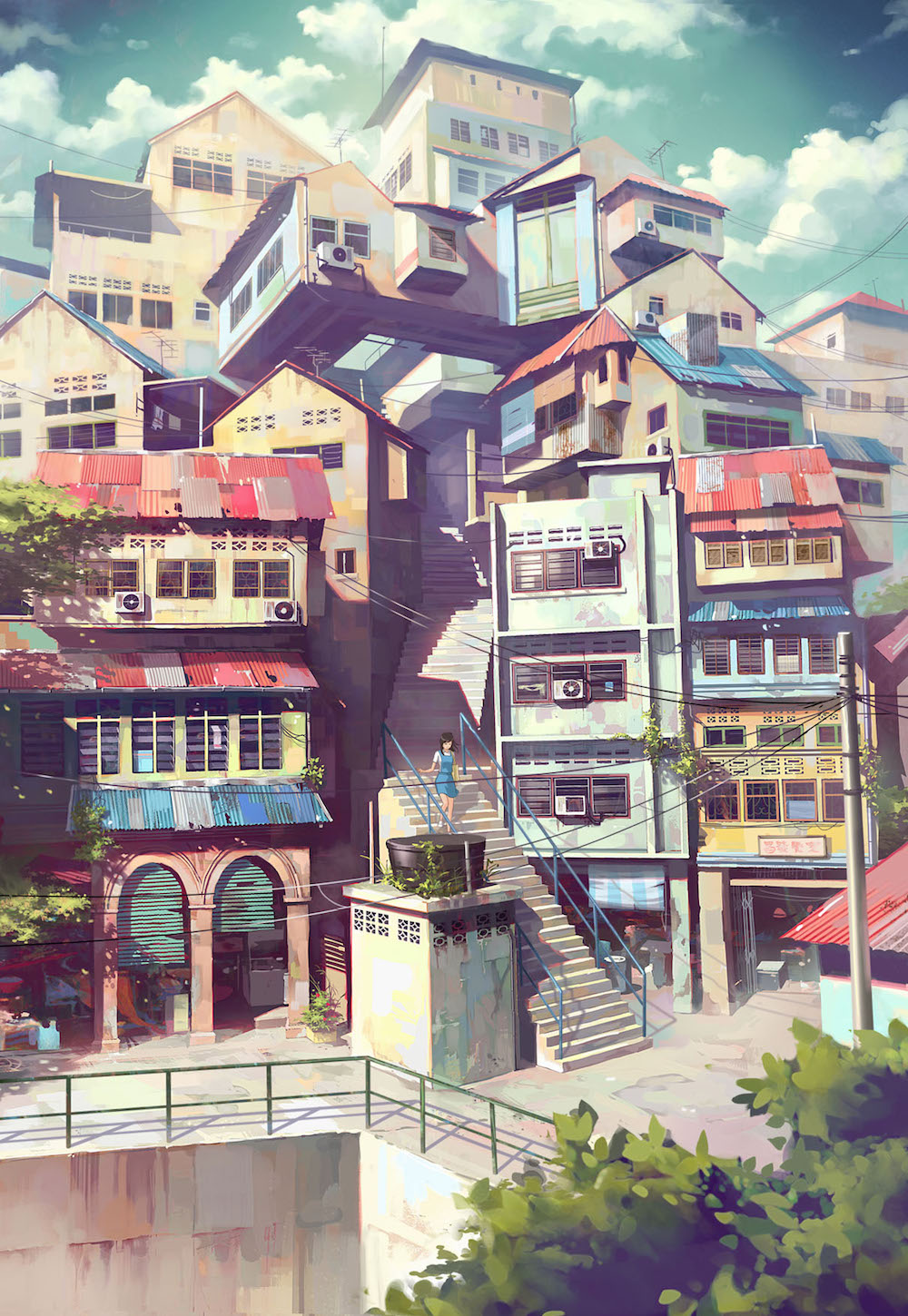 Art by Fei-Giap, who can also be found here and who is selling an art book here.


Anyway: While going through the hurricane box and checking for dates, I noticed that there was DAK ham with an expiration date of 2008. If I've learned anything from wasting time on the internet, it's that expiration dates are meaningless so I figured I'd have it for lunc..... 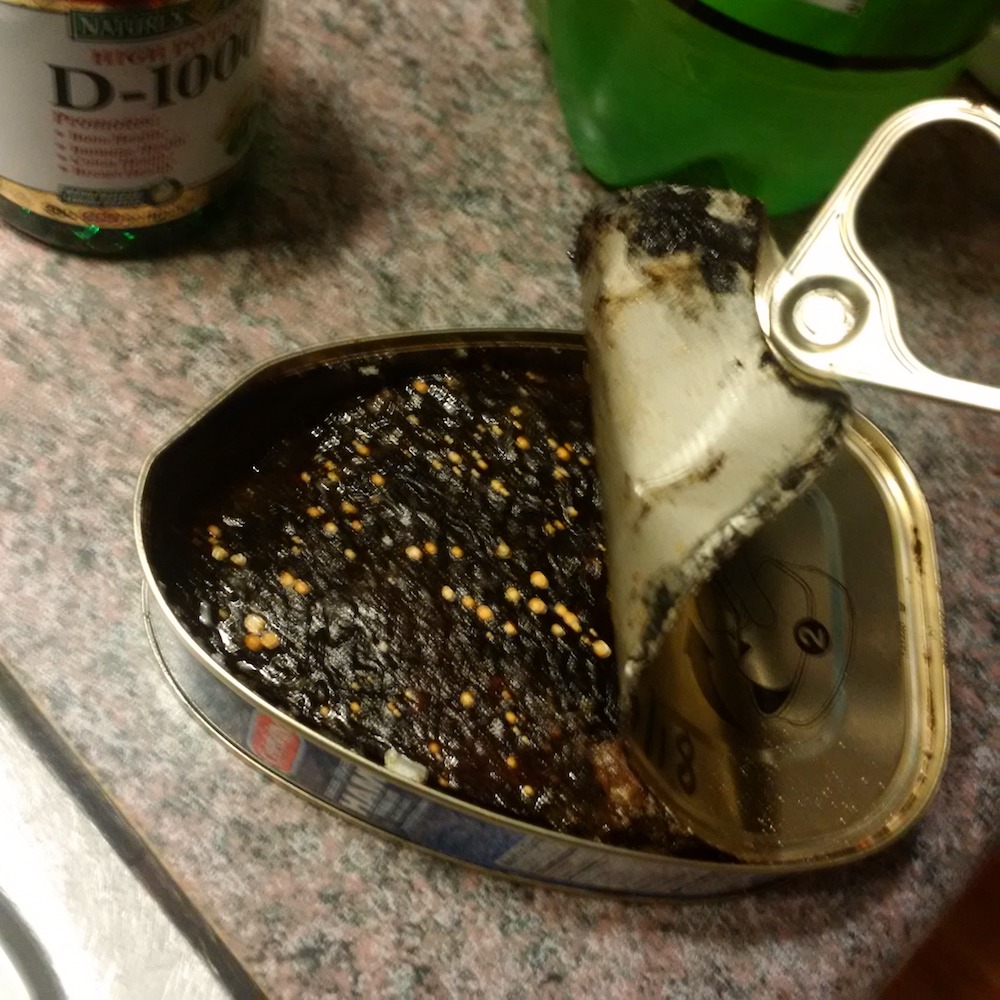 Not pictured: the aroma of the Somme, circa August of 1916

You can clearly see on the side that it's not not caviar, its supposed to be ham. In either case, it's not Kosher. I cannot describe of intense and persistent the odor was. I ran the AC for two days before not being able to smell it in the kitchen any more. Even with all of my baking soda, the garbage can outside may have to be disposed of. Thank God the garbage man came on Monday.


Not so much a problem as a question, the answer to which may be a concern. If they have this "special" version that's made out of vegetable matter...what the hell are Wheat Thins made of normally?

That's one possible answer (but not necessarily the only one) to the mystery in question.

Amazon has said that they don't need UPS to deliver their boxes anymore. They'll do it themselves and bury us.


U.P.S. uses driver release bags. These are bags one puts parcels in so they don't get wet. Ensuring one has enough DR bags is one of the driver's pre-trip duties. Not having them; that's one of the things that can get a driver into big trouble. Releasing a parcel on an uncovered porch in the rain? HUGE trouble. 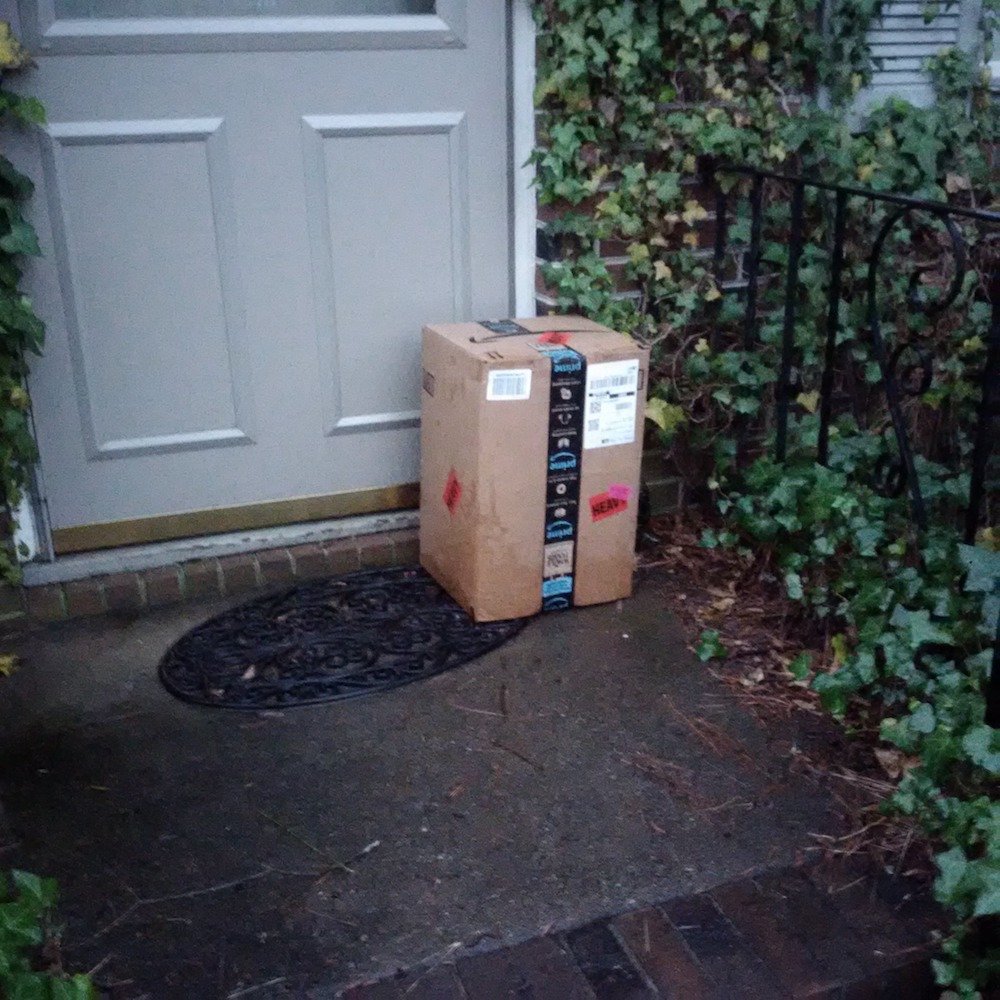 Not pictured: the slugs...amnd the incredible mess when everything dumped out the bottom.

I started working on a post earlier today when Parallels suddenly opened up. I was downloading a reward from Patreon at the time so I thought that something was autoplaying and closed it. It opened again.Eventually, it also opened up New Moon and Safari flooding my screen with windows.

It turns out that my copy of Parallels that I bought so many years ago that I've actually got a box and a little DVD...is suddenly a rental.

I did not buy a subscription, I bought a software program ON DISC.

Well, let's see what is required to renew my use of my propert... 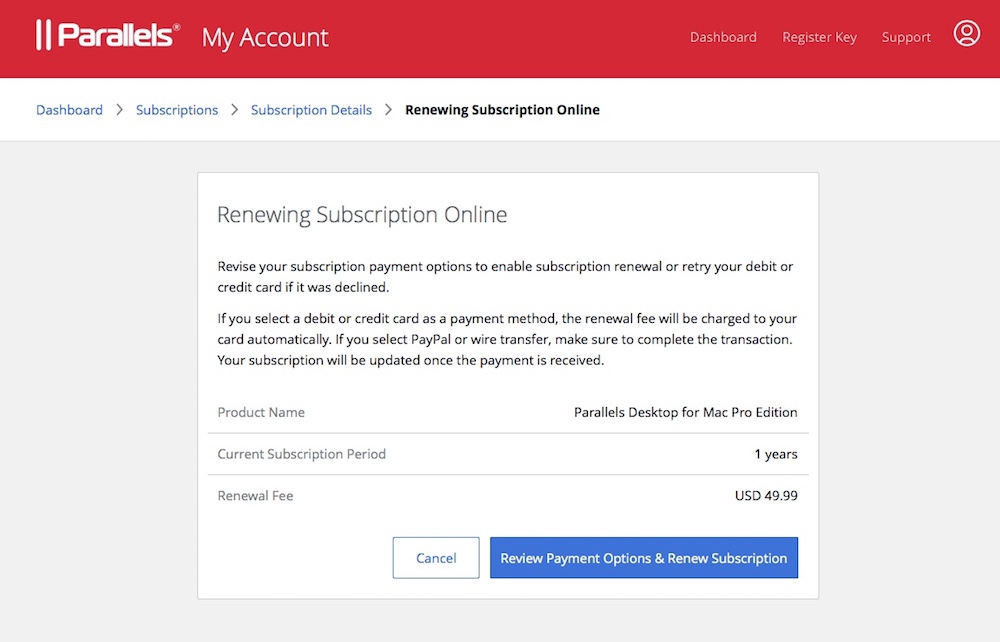 50 bucks! To keep using my windows partition!? ANNUALLY!?
I know that this is the new business model, but I've never heard of them actually changing the terms like this and I'm wondering if this is a third party extortion scam. Parallels DOES have another feature called TOOLBOX which is a support plan and renewal of a subscription would make sense in that case. However, this alert is not for that service, this is to gain access to my own Windows partition on my desktop via a program that I purchased years ago.

And so now, all the stuff on the Windows partition is gone like Thanos snapped his finger, until I pay up. I'll need to look into this more to make sure its legit. ISTR that the program cost less than the renewal, but I'll have to dig my box out and everything's in piles because I'm cleaning.


I was heading over to visit my friend Bob!1! Monday when I got a phone call from my  Dad who informed me that He and Mom were coming up to visit...but that they were going to be a little late as they'd taken a detour to the Emergency Room in Suffolk because Mom had stopped breathing and he 'had to go now'.

Given that he said he was calling from the emergency room and his calm demeanor, I was 99% sure that my Dad had not relayed an accurate medical assessment. However, when I got there, it turned out he was more accurate than I might have hoped, since it turns out that Mom was hospitalized with severe bronchitis and couldn't talk. At all.  She's on antibiotics and an inhaler and seems to be doing better. At least that's what she writes on her little notepad. They left yesterday evening, and as of a few minutes ago she was doing better and had no fever.

Finally, when I went to the gun store the other day, I noted that a new Ice-Cream-Shop had opened next to it so I ducked in to check the place out and noted this sign of our times... 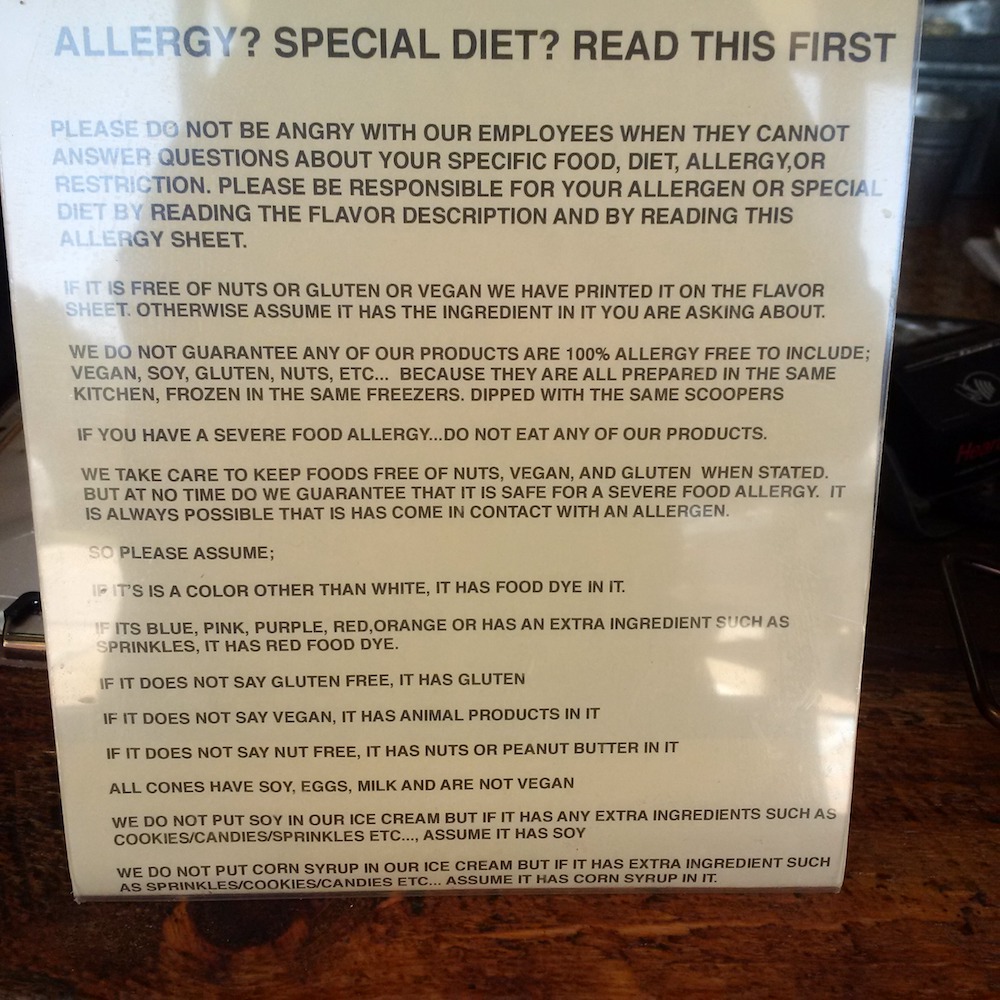 1 My guess is that Parallels had an update recently which included their new payment model, and you "accepted" the accompanying license change. Most likely, reverting to the old version will restore your perpetual license, if you can find a downloader for it, and they didn't gratuitously change the disk image format to something incompatible with that version.

Alternatively, a bit of Googling turns up instructions on how to migrate from Parallels to the free Virtualbox.

I used Parallels once upon a time, and switched to VMware Fusion for compatibility reasons I no longer remember. I've bought some upgrades over the years, but I'm pleased to report that they still sell honest-to-gosh licenses, not rentals.

2 Yeah.  VMWare Fusion keeps asking me to upgrade, but - and this is rather important - it still works.


I run Virtualbox on Windows for my Linux dev environment, and it's great for that.  I haven't tried it on Mac though.

3 Airborne Express once left a $400 hard drive in plain sight on my front porch in January in Boston.  By the time I got home it was sitting in and under about an inch of snow.

4 Anything good at the Gun Store?

5 I just ducked in to buy some ammunition. I haven't been to the range lately though.

6 I've been experimenting with running a Windows 7 guest on a Linux host using virtualbox. So far so good, with one exception: I need to install their guest additions to do things: If I install and enable the vanilla 3d-accelerations, Makerware will work (I'm guessing they use directx even when it's not available), but the default photoviewer will crash. If I disable, then some directx based programs will sort-of-launch but not display any directx calls.
I do use a Windows host with Linux guest. The point of the former experiment is to have a Windows virtual machine that has all the driver goodness of interfacing with my USB devices and software, but which Microsoft can't arbitrarily screw up one day.

7 PS: Software as a service/subscription model BS is digital serfdom. Unless I am forced into it, I'll have nothing to do with it. Kill it with fire.

8 If you want Linux and aren't bothered by Windows 10, the Ubuntu under WSL thing is pretty nice as long as you don't run into any of the limitations.
You can even install a Windows X server and run X applications on your desktop.