A Scarrier Word than Hemorrhagic (Updated) Posting will remain light to nil for at least the rest of the week.
Reasons are rather graphic and as a courtesy to our readers are below the fold.


In the meantime, here is your Edith Hamilton fix. 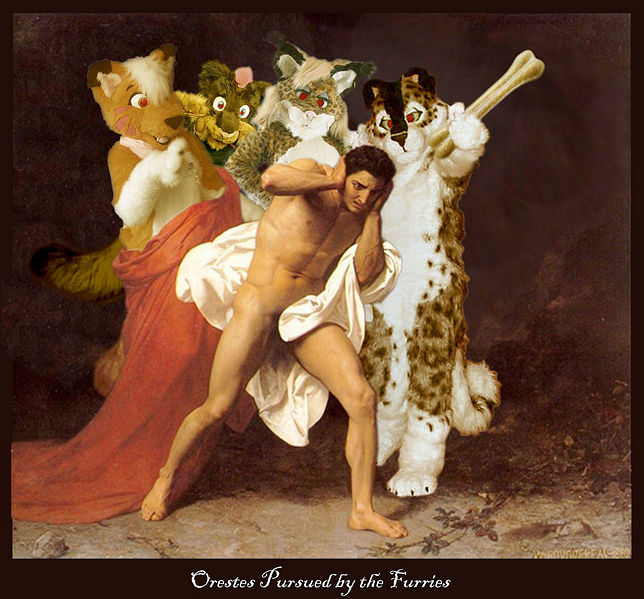 1 Dad's urinary oncologist was named Peter Pistor. I kid you not.

It's good that you went to get it looked at immediately. Keep us posted.

2 ...maybe Yamaku University..?  Seriously, don't worry about dishing up the "free ice cream"; the most important thing right now is for you to get better.  I second Avatar's thoughts, though - at least let us know how you are now and again when you're able.

3 Oh hell.  Get well soon, 'muppet.  Great to hear that the rest of your family is doing better, but you need to look after yourself too!

Still Busy Of course even if I had time to spare, I couldn't do anything about the recent release of Katawa Shoujo, as I don't do torrents, and 4-Leaf is not yet offering direct downloads.  However, Brickmuppet Blog, fortuitously,  still retains the services of an EBP* for these situations. He sends us this screen cap from the game. 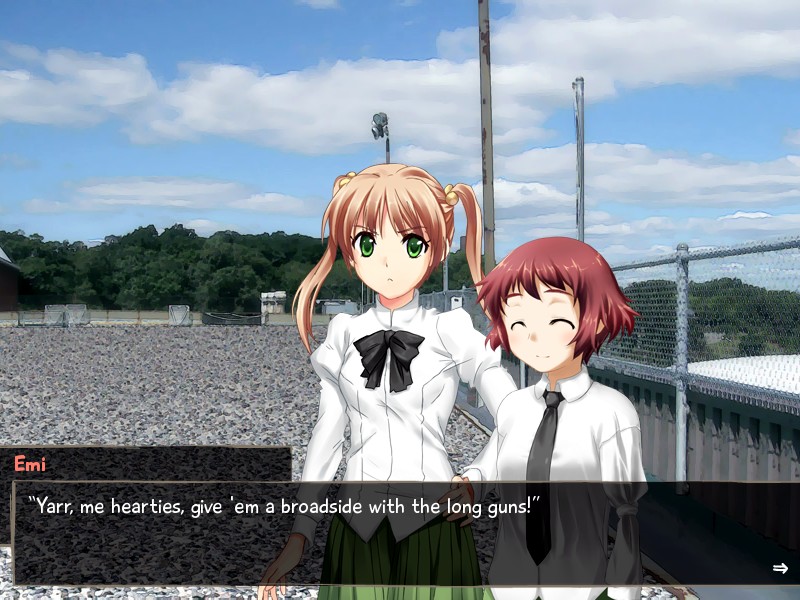 2 I'm sure I could burn a CD and put it in the mail if you wanted. (You'd be amazed how often we do that at work. I don't care HOW fast your internet is, no long-distance file transfer method beats "full hard drive placed in FedEx for overnight shipping".)

Better Mom is home and doing better. She starts therapy tomorrow. It is still quite hectic here between that and school starting.

Other than belatedly remembering to pull my endorsement post out of "draft", posting is light.
Here is Nodoka Manabe as compensation. 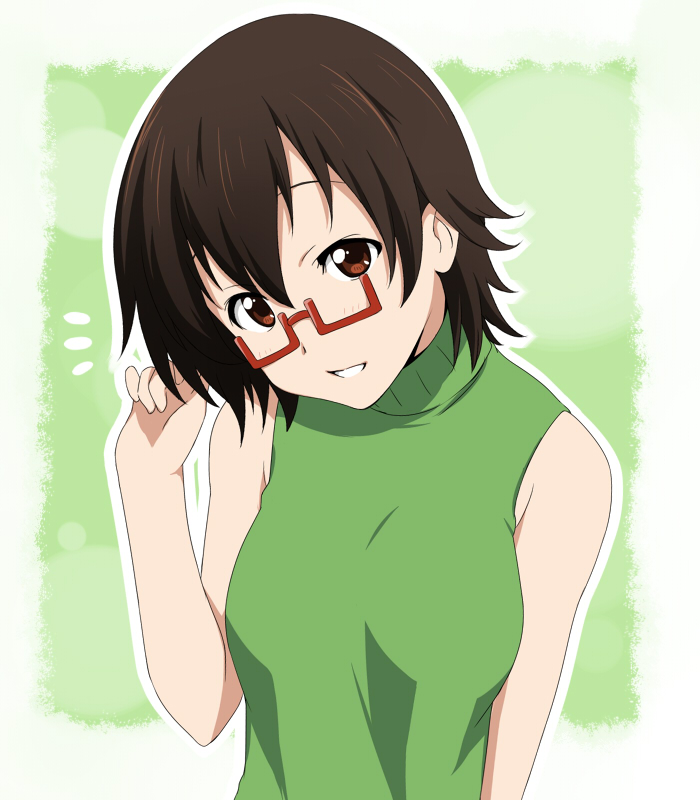 1 Great news - hope your mum continues to do well.

2 Good news on your mom.  I hope she comes back quickly from this.  It sounds like your days have been stressed and very, very busy. Take a little bit of time for yourself, even if you think you can't.

The Sum of All Fears Yesterday I was still recovering from the Norwalk / food poisoning or whatever the hell it was.  My digestive tract seemed quite empty. More importantly, I was no longer wretching bile and drinking water did not immediately precipitate further wretching.  I got up and tried to get my act together to get to school and buy my books, but it was a chore just to get to the bathroom. Nevertheless, I got into the shower and got a stark lesson in perspective...

Because at that point things went south, way south...

My mom was going to go see my sister, to oogle at her granddaughter and help out around the house. She went into the bedroom to get something and got lost...
...in her bedroom.
My dad found her and after realizing that she was utterly incoherent he called for me in a voice that could chill fire. I staggered out of the shower, threw on some pants and we got her to the car. He took her to the hospital.
A few hours later he called.
She has had strokes...
plural...

It seems now that she has had a series of mini strokes over the last month or so which she had presumably written off as holiday stress.

I've talked to her twice since then via phone. The first time she was quite incoherent but the second time, her speech, while slurred, was understandable.

I'm taking care of my grandmother who currently cannot go to the loo unassisted and Dad is with Mom. He stopped by last night  to get some of her things. As one can imagine he is quite despondent.

Last night they moved her to a specialist facility at a Hospital way out in Suffolk and although visiting hours had passed they provided my father a bench to spend the night with his wife...which does not bode well.

This morning there was no word but they were still conducting tests.

That is all I know at this time.

I'm rather beside myself at the moment

1 For what it's worth, these days it's quite normal for spouses to be allowed to spend the night in the hospital room, even for relatively minor things.  Having a loved one at hand is quite effective at keeping the spirits of the hospitalized person up.

It's easy for me to say, of course... it's not my mother... but I really wouldn't read too much into him being allowed to stay.

Keeping my wingtips crossed for your mom, Mup.

3 Let me add mine. I'd say "let us know if you need anything" but I'm not sure what we could actually do. If I could send nurse catgirls, they would be on their way.

4 A little late to the party, but hang in there.

1 On top of everything else.  Good lord.

I lost about five pounds when I had salmonella a few years back, and that laid me low for a week.

3  That's a ballpark figure but it's well within the ballpark. I don't think I had LOST any weight on my birthday week. I expelled the contents of my digestive tract  from various orifices about every twenty minutes for 14 hours or so, then it tapered off and only happened after I had generated enough bile to barf or if I attempted to drink water. If it had gone on without being able to drink anything much longer, I would have gone to the hospital.

I am weak, sore and a bit wobbly, but I'm able to drink fluids now.
I'm over 6' tall and weigh close to 300 lbs so there is a bit more leeway there. I've simply gotten a head start on one new years resolution.

Also, I can honestly say that right now I am not full of crap.

Update on Occurrances in the Brickmuppet Bunker Banality is below the fold.
Picture is unrelated. 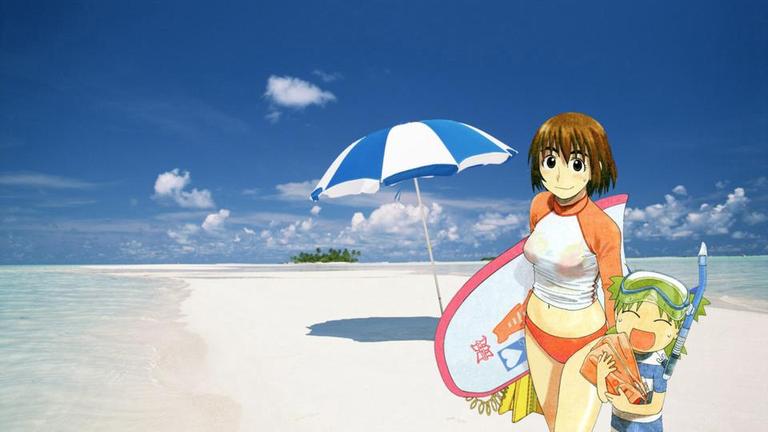 It's from Yotuba@! Go buy Yotsuba@!

Question Found! For some time experts have known that the answer is 42.
Considerable effort has since been put in finding out what the question is.
Now, due to a unique confluence of events, this problem has been solved, albeit only temporarily.
For the next 366 days the question is "How old is the Brickmuppet?"
Now those experts have this brief window of opportunity to find out what all of this means. 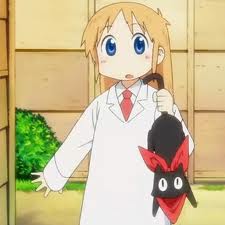 An expert, hard at work on the problem.


Yes, all of history has lead to this year.
I guess those Mayans were on to something.

3 Happy birthday!  And congratulations on the other thing!