SNOWPOCALYPSE! Christmas afternoon, with snow reported to be on the way, I asked my folks if they needed me to pick them up anything. 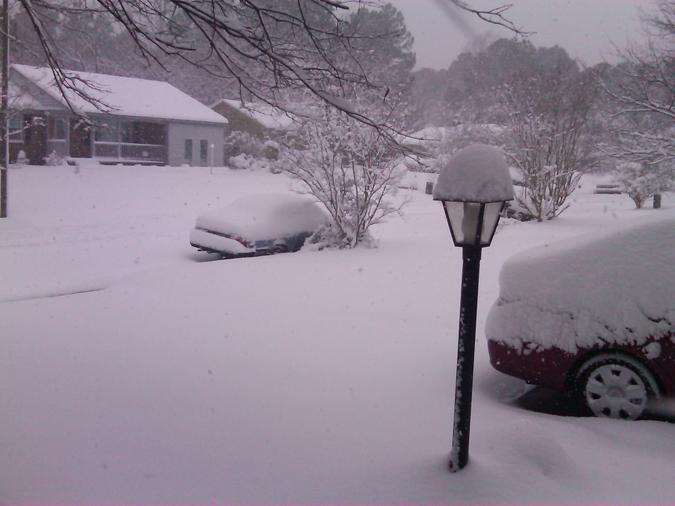 That blue thing in the distance is my Cressida.

Yesterday afternoon, with more snow falling than Southside Hampton Roads has had in 20 years, my mom remembered "Oh...my prescriptions!"
So off to Wallgreens I went. 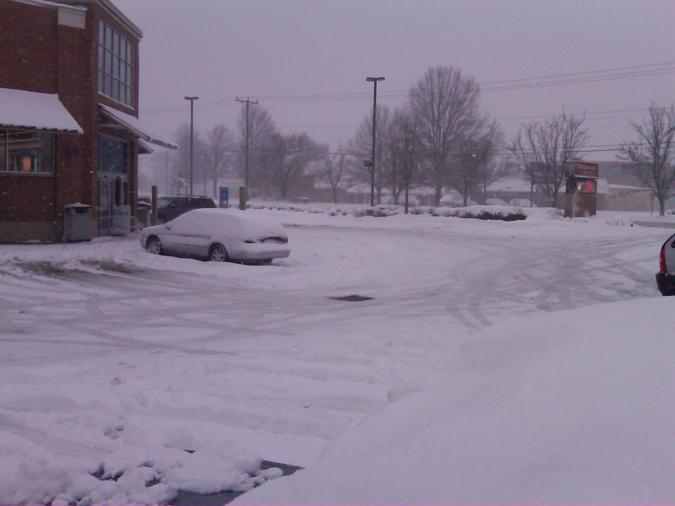 The prescriptions filled, I browsed the store looking for hot chocolate but there was none. In fact, the store was also a bread, milk and bottled water free zone. It was about the only place open and seemed to be doing a brisk business selling what was left.

The roads were atrocious. I saw 3 wrecks involving at least 8 cars between them. Portsmouth has only about 10 snow plows and I heard on the radio that two had overturned yesterday.  (How does that HAPPEN?)
Additionally, internet and phones were out until this morning. 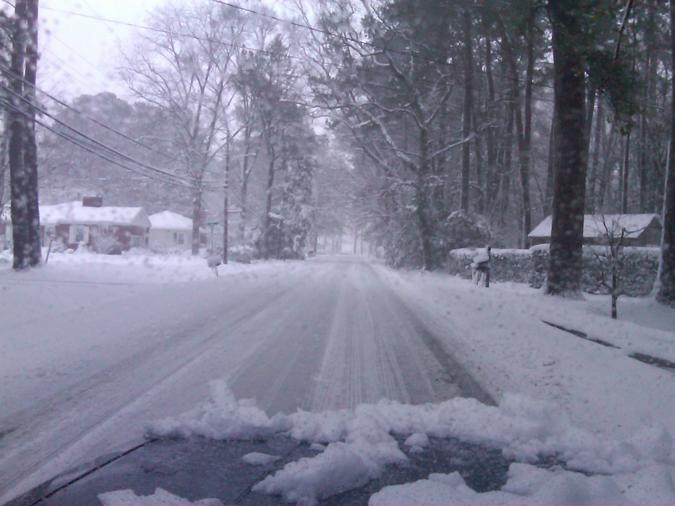 Somewhere out west Pete is no doubt laughing a loud, mocking Slavic laugh at the pandemonium this 6-8 inches of whiteness has caused us silly non-Russians.

However, this area simply has not had to deal with this on a regular basis since the 80's. This really is the most snow we've seen in nearly 20 years and by far the earliest meaningful accumulation on the south-side in that time. The last few winters only snowstorm of note occurred in February of this year and was somewhat less severe. Until this weekend, it had been the worst snowstorm we'd for a long time. (Though an ice storm in 1999 did cause some major problems)

Although I was supposed to be off today, a pleading text from my supervisor convinced me to head in this morning. UPS is on the peninsula in Newport News.  That area, on the northern side of the roads, gets snow much more frequently, but even there this storm had overwhelmed the road crews. It took me over an hour to make what is normally a 30 minute commute.  Only about 10 percent of our workforce made it in and worked our butts off trying to get the brown trucks loaded. However, we ended up well past driver start time with virtually everything in our delivery area closed and the roads quite treacherous. Thus UPS shut down without unloading all trailers for only the second time in the 19 years I've worked there. (The only other time was for a hurricane). A few trucks are running very abbreviated routes but that is all.

Tomorrow will be one busy day as we catch up. We'll be starting 2 hours early, which for me means getting up at 2AM...Its almost like.... Christmas....again. 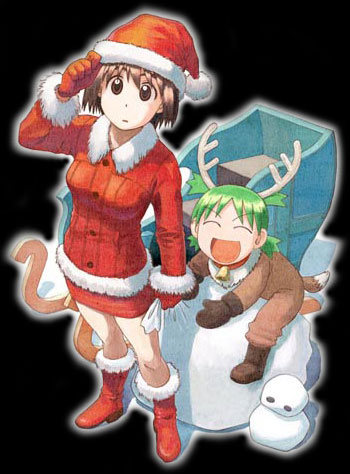 I guess the only thing to do is read Yotsuba&! 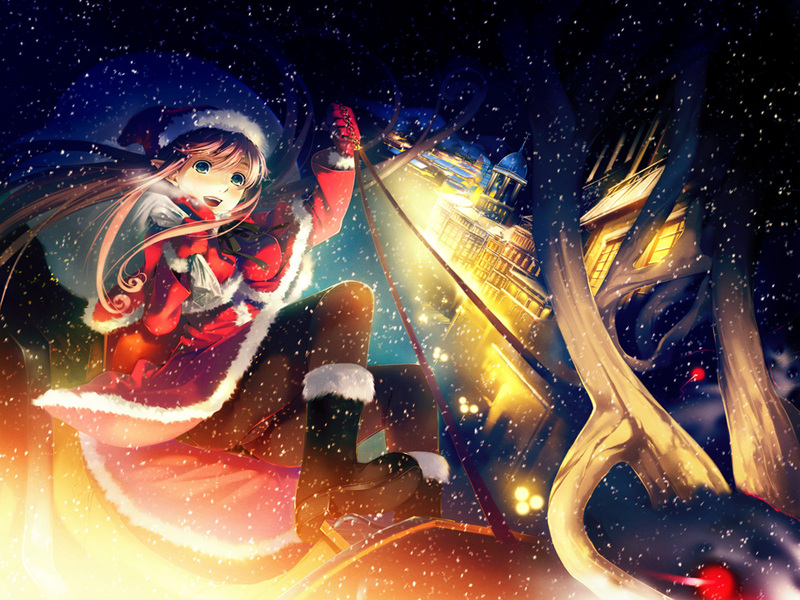 I got the best Christmas present evah.
14 1/2 hours of sleep!

Jingle Hell
After the flu and associated hospitalization,  missing two to three weeks worth of classes and Christmas hours at UPS, I had exams last week. I was a bit concerned due to the large amount of class I missed just prior to exams, which resulted in this answer I gave to one of the 15 short answer questions on the Asian History Exam.

The May Fourth Movement was a political movement that began on May Fourth in a certain Asian country. Regrettably, as I have been absent for three weeks I cannot be more specific than this technically correct definition. This is the third sentence as required by the instructions.

Despite this, I just found out that I got an "A"on that exam. Wo0t!

It's Christmas week.
I work at UPS.
So, in lieu of content, here is some Christmas cheer. 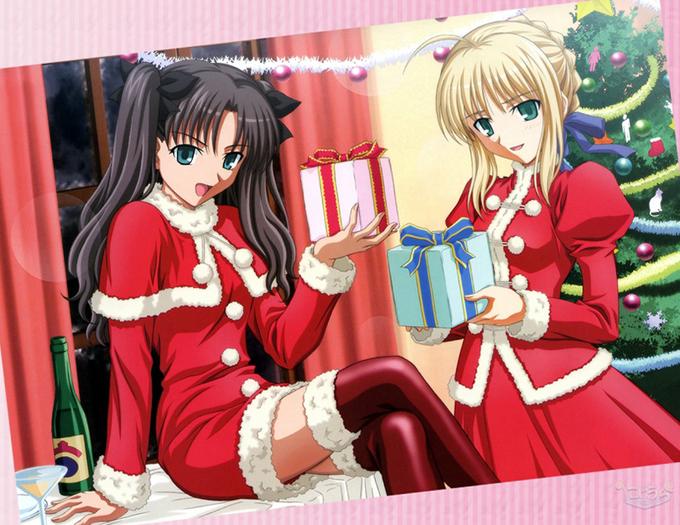 As an added bonus, as per a request from Ubu, here is another picture of Saber...dancing...in a bunny suit.

At Brickmuppet Blog we do aim to please.

1 Well stated!  Many moons ago, I was a TA in the History Department at a (semi)major state institution.  In that context, I once gave two bonus points on a final exam to a gentleman who left an extremely detailed drawing of a union soldier on the front of his blue book (course was US History to 1865).  I also recall giving extra credit to a strangely feminist interpretation of the collapse of the Roman Empire which was, however, illustrated with enough facts to show that the author had at least paid some attention to both text and lectures--which was far more than some of the other examinees had done.

Frankness and originality was always worth a little something extra!

2 And Saber in a bunny suit is always good.  But how cruel to put that behind an NSFW tag.... you toy with me sir!

OTOH I do have a letter from the hospital so I should be able to get something in an office visit.  As to the bug itself, I slept for 13 hours. I don't hurt as much. My fever is down around 100 and I am much less weak.

I hope to be able to return to work/school tomorrow.

I Hate that Girl Enza...But She Flew Right In Been laid up in bed pretty much since Friday after work with a worse than average head cold. Today the coughing started. About 7 hours ago I noted that my temperature was 103. About 6 hours ago I noted that the coughing was excruciatingly painful and there was just a touch of blood involved. Given that I was getting weaker, not better and given that I had to be to work at 2AM and, given that my job is at UPS, and the fact that especially around December 5th one really needs a medical justification for not showing up, I got a much needed shower and went out, only to realize that the only place still open was the hospital.

Although I was indeed dragging it's really gauche to be going to the ER for a damned cold.

To my astonishment, I was out in under 90 minutes. I must say that Harborview Medical Center is a really professional outfit and now 3 out of the 3 times I've been there in the last  year it's been about as pleasant non-horrific as is possible when one feels like a buffalo chip being used as a Voodoo doll.

There was no Pneumonia on the X-Ray and I was diagnosed with an acute viral infection.


Other than that, my only concern was my second chest X-ray in about a month, but that was unavoidable.

My only prescription was a codeine based cough syrup which tastes like ass, yet is effective...and is juust niice.

Things don't hurt as much anymore and there's this  thread on /d/ that looks really fascinating now...but I'd best not blog about that at all 'cause if I did no one would ever talk to me again...

Exams, 3 Papers and UPS in December Things are busy this fall in Brickmuppetburg.
...so here is a picture of Saber in autumn. 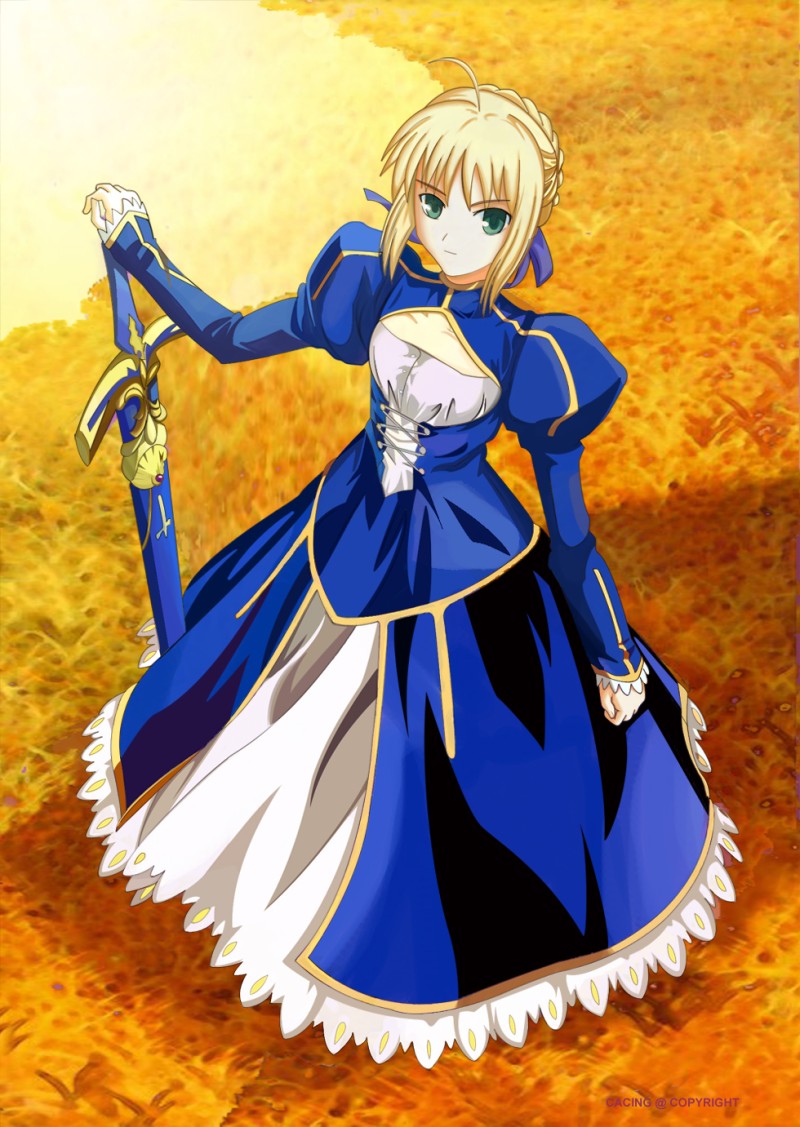 2 Saber's an entertaining character, but also a really frustrating one. Bad, bad case of "you want the wrong thing, stupid!" Of course, that's Shirou's problem too...

Of course, unlike most shows the writers are aware of this.

4 Oog.  I've got to remember to stop back here more than once a week, if you're going to start posting Saber pics.