I finally ended up taking the machine to the shop, and while I was at it I upgraded to the TB drive. Upon unpacking it, I placed it on my desk to check it out and make sure it was working OK. However I need the desk for homework, so Saturday I moved it up to the shelf where it lives and made an important discovery.

In the back of an iMac is a vent. Here you can see it very clearly not marked near the upper edge, above the Apple logo. 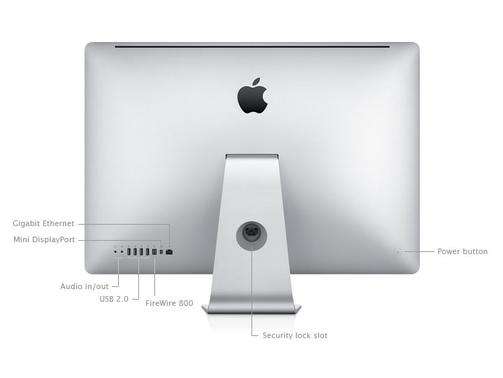 That vent is extremely sharp edged. So sharp that after the resulting cut bled profusely...into the vent. The machine began to make a really....odd...noise, which I took to be blood congealed on the fan.

The cut bled for 3 days and I ended up going to the emergency room, where I had it lashed up securely, was given a tetanus shot and was informed that I was not to do anything with my left thumb for a solid week. ( No work and associated monies for Ken). As an added bonus the tetanus shot knocked me on my heels.

Of course I also had to take the computer back to the shop and sheepishly explain this fiasco.
Here's the thing: The Mac guy mentioned that this had actually happened to some of his other customers and he'd sent a consumer alert to Apple.

Now Steve Jobs has the most crackerjack industrial design team in the whole frickking world. Therefore it beggars belief that this is actually a design flaw. Thus I can only conclude that this is deliberate and iMacs are actually designed to collect DNA samples as part of a bloody biometric phishing scheme or perhaps they simply feed upon the blood of the unwary.

UPDATE: It occurs to me that some of my fellow Mac users may take violent and murderous offense at my post. Rather than proselytizing in the comments section of this post I suggest that you instead go here and ask yourself, 'where is your Jobs now?'

UPDATE2: Although it is ready, I still don't have Holo back yet due to the fact that I was not able to get through yesterdays obnoxious southeastern Virginia traffic before the store closed.

1 Eep.  I've had my fair share of cuts and scrapes from PC cases over the years - and I once stuck a finger in a CPU fan while it was running (ow) - but I've never needed stitches.

On that basis, your conjecture seems reasonable.

Steve Jobs is a Vampire...or at least his iMacs are! Shocking revelatory revelations to be revealed within 24 hrs...if I still live.

For more proof of Steve Jobs being a vampire, see the following headline:

Dread UPDATE: All day long we waited while they poked her and did tests. The biopsies were completed today and between that and the additional pictures they took it appears that the mass that showed up on her X-ray is in fact fluid and scar tissue from the previous surgery.There is still some concern due to the fact that the incision is still experiencing fluid build up and additional scarring 9 months after the surgery, however, the scaring does appear to be just scar tissue and not cancerous.

This does suck as it is causing her intermittent pain....but damn that is a relief.

My car  auto-cannibalized itself last week, the internet has been twitchy, due to utility line work , I managed to screw up my iMac when I tried to increase the size of the Windows 7 partition and school started today...except that my teacher didn't show up.

All of which is utterly trivial now...

Last Thursday my Mom, told us us that her vision was blurry. She then  complained of stabbing chest pains and developed great difficulty breathing.

She was rushed to the hospital and after a day of tests she was determined to have...a severe kidney infection...which did not at all jive with her symptoms, but her heart was OK.

Today, she went to a doc-in-the box for a follow-up on her infection, and it seems to be well on the way to oblivion. The duty doctor was still perplexed about the pains and asked the Hospital to send over the X-rays they took the other night. They had been focused on the heart and so had apparently missed the gall stones...and the huge mass in her left breast.

She had a close run thing a while back with cancer on her right side (which is still clear after her second surgery last year). This thing is big and has come on very fast. (Since January)

We contacted her surgeon and he's seeing us first thing tomorrow. We won't know anything until then but he had the X-rays forwarded to him and he said to make preparations to go under the knife very quickly. I'm guessing Friday is the soonest because of the Kidney infection.

2 Words fail in times like these.  We're your friends and here for you when you need us - be strong and we'll be wishing for the best.

3 That is a huge relief! Wonderful news!

Much relief from Duckford, Ken...