Prospecting Prospects
Issac Arthur's video this week is on the colonization of Ceres. This one is pretty neat. I had not realized that the gravity on Ceres was so low that spin habitats could be put on the surface and there would only be the equivalent to about a three degree list to port for the inhabitants.
The fact that sunlight is actually bright enough to grow plants and be marginal for solar power as far out as Jupiter is interesting as well.
I'm much more of the Dandridge Cole / Gerald O'Neal school of thought on space colonies. I'm skeptical of Mars settlement, especially when A Stanford Torus or O'Neal cylinder pretty much will have correct gravity. They can be anywhere, perhaps next to (or inside) mineral rich asteroids and potentially move if needed. 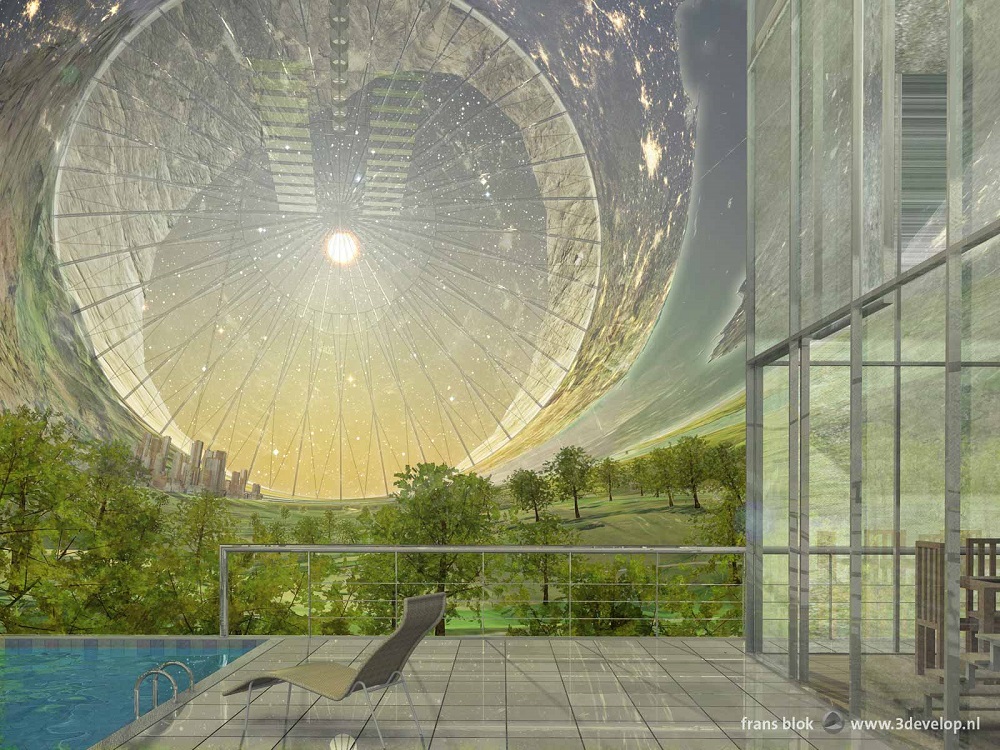 1 What the hell is that accent? He's got more W's in odd places than Tweety Bird. Totally throws me out of the narration.

1.  With Niven & Pournelle, I always wondered why, after spending millions to get out of a gravity well, you would want to go down another.

2.  Barring a cultural change far off my radar (which really isn't far) there are not going to  be off-world colonies except as playgrounds of the hyper-rich.  The entire notion is predicated on Malthusian/Ehrlich (so: false and insane) grounds of population growth.  The populations of those that have the IQ & culture to live in space is in decline.  The population that's still growing?  I wouldn't trust them to close the airlock doors.

What the hell is that accent?


He has a  fairly epic speech impediment. Most of his videos mention this at the beginning and suggest one avails oneself of captioning. Note that in the last year he has improved dramatically, as the show is, it seems, good therapy for him.

He also used to have an Elmer Fudd pic at the beginning of each episode but I suspect there was a DMCA issue.

Note too that Mr. Arthur also did a couple of tours in Iraq.

4 I'd like to see a serious discussion of a habitat design modeled on the roller bearing. One ring nested inside another, with the two kept apart by magnets and vacuum. The inner ring would spin to produce centripetal acceleration, while the outer ring would not spin and would be sufficiently robust to contain the inner ring.

I don't have the math or engineering know-how to calculate the stresses or dimensions needed, but I suspect that such a design could be made arbitrarily large without needing exotic materials. Just make the outer ring more robust. As it's not experiencing any centrifugal tension itself (by virtue of not spinning) it can be optimized to whatever thickness is necessary to constrain the inner ring.

Start mass producing such nested-ring habitats (diameter 300 miles, length, 100 miles), and every group on Earth which wanted its own world, away from *those* people, could buy one and build its own little Utopia.

We'd need a Launch Loop to make access to orbit cheap enough to make the Lunar mining colony economical before we could start building the Rings, but none of that would require technological breakthroughs, or any scientific advances.

Well, unless the nested-ring geometry doesn't work as I expect it to.

5 The spin gravity puts a strain on the habitats such that the maximum size with steel is a cylinder five miles by 20...Now that does have a safety factor built in.
You're right about the bearings though. That is going to be an issue in these combined gravity habitats.
Regarding the rock; Even the old Stanford Torus used slag brought up from the moon to provide a nonrotating radiation shield. The O'Neal Cylinder designs did as well, but most illustrations omitted the rad shield  for clarity in exactly the same way this one doesn't. 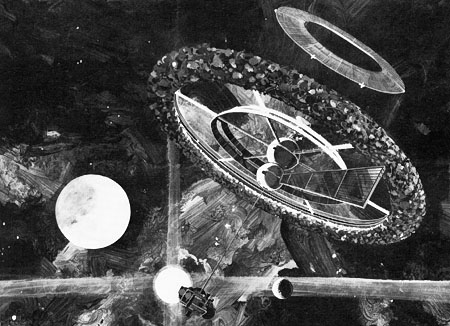 Building them in Asteroids as I.Arthur suggests kills a couple of birds with one stone...er asteroid. The materials are in-situ, and the shielding is already there.

6 As I understand it, the strain induced by the spin is basically tension produced by centrifugal force. The geometry I'm visualizing has a spinning ring *inside* another, thicker, non-spinning ring, like the <a href="https://duckduckgo.com/?q=roller+bearing&t=h_&iax=images&ia=images">roller bearings</a> in a skateboard or a fidget spinner. The outer ring would act like a railroad for the "train" of the inner ring, and could be made arbitrarily thick so that it could handle the angular momentum produced by the spinning inner ring.

If it would work, then the whole system could be scaled up to arbitrarily large diameters, with no need for scrith or other unobtania.

Unfortunately I'm not an engineer, so I can't prove that it would work.

7 A containing outer shell doesn't cancel the outward force, it just applies an additional force in the opposite direction.  So now your inner shell material is being subjected to not just the tension from the centripetal force, but is also facing friction heating, compression, and drag from the outer shell.  Your design would create more problems than it solves, and would result in a smaller habitat, not a larger one.  (Also not an engineer, but that's pretty basic physics...)

8 <i>A containing outer shell doesn't cancel the outward force, it just applies an additional force in the opposite direction.</i>

Yes, thereby preventing the inner ring from tearing itself apart.

<i>but is also facing friction heating, compression, and drag from the outer shell.</i>

There would be no friction or drag if the rings were held apart with magnetic fields and had only vacuum between them. The "compression" is a non-issue as keeping the inner ring compressed is the entire point of the configuration.

9 There would be no physical friction.  The magnetic fields on the other hand...
Did you know that the moon's gravity is slowing the earth's rotation?  It's a quarter million miles away, roughly.  The outer ring and magnets would be a lot closer.  So you'd need a fair bit of energy to be input constantly to counter that.

10 What keeps the outer ring from breaking up?

Thickness. The outer ring could be as robust as necessary to contain the centrifugal force being generated by the inner ring. Given that the outer ring would not be spinning, it's own mass would put no strain on its tensile strength.
As for the possible resistance produced by the interaction of the magnetic bearings, well, that's a possible obstacle. But again, I'm not an engineer, so I can't calculate whether that would be a problem or not, nor how difficult it would be to overcome. Possibly some electromagnets mixed in with the permanent magnets would be enough to overcome the hypothetical resistance.

To be honest, I was hoping there would be an engineer reading this thread, or that someone hereabouts would know one, who could run the numbers and provide a definitive answer.

11 I'm no engineer, but the other 'non-trivial' problem to borrow a word from SDB, is that you'd have to make certain the counter-forces need to spin it back up (or in the first place) would have to be very exactly balanced, and monitored in real time.  I'm not sure how you could do that in a way that wouldn't set up a negative reinforcement cycle that got further and further out of control.   Let's not even touch on where you're going to get non-electromagnets big and powerful enough to balance your giga-ton monstrosity.  The moon's got a surprisingly high amount of iron, but that's not all it takes.   And adjusting the position of a two-part "torus station" would be...tricky.

This reminds me of the flywheel discussion on Chizumatic.  Which I'd link, but it's dead now, and I don't know the mirrors.

12 Ubu, Chizumatic is still up; denbeste.nu is down.  Was this the link you were looking for?

Some of USS Clueless is still mirrored at sdb.dotclue.org.

13 Someday, we should reconnect with Steven's brother and see about transferring the domain registration, or at least renewing it and pointing it at the current server. I decided not to pursue it at the time.

14 you'd have to make certain the counter-forces need to spin it back up (or in the first place) would have to be very exactly balanced, and monitored in real time.
My thoughts on spinning up the inner ring were along the lines of having mass-drivers on the outside of the Rim Walls. Push reaction masses along those mass-drivers in one direction and the inner ring spins in the other. You could use a LOT of reaction masses, or just some very dense one, or both. This would give you the advantage of allowing for the launch of interstellar space probes (the reaction masses) while bringing the inner ring up to the desired rate of spin. Or you could just use charged particles and take a long time to get the desires spin rate.

I agree that the magnetic bearings are a possible stumbling block. I keep hoping I'll run into an engineer who can address that concern. But I don't think it's an impossible obstacle.

I can practically hear SDB complaining about derailing the thread....