Do it Yourself SCIENCE!!1! From the Bottom Up   One of The Brickmuppet's Crack Team of

Science Babes coyly hints at her approval of a series of stories involving do-it yourself SCIENCE!!1!

In 1997, one Karl Stanley invented and built himself a submarine. This is cool and uncommon, but not unheard of by itself. However, his submarine is not only an innovative gliding sub,  but naval architects estimated it had a crush depth of 1500 feet.

Will Forman, who designed and tested submersibles for the Navy, thinks Stanley is the first ever to build a gliding sub. "I think it's a great thing, especially if he survives," said Forman

Amongst its other features:
(Submarine adventures require appropriate BGM)

Stanely, chafing at the lack of opportunity to put his sub to use in Oklahoma moved first to Florida and then to Honduras where he has for the past several years run a small tour business. Oh, and there is a movie...

Sadly, he ran afoul of local politics and was for a time, unable to offer tours. Sometime in the last two years however, that issue seems to have been resolved.
SCIENCE!!1! wins!

Via The Firearm Blog, comes this video of a homemade coilgun (an electomagnetic gun, operating on the same principle as a mass driver).

Steve takes a stab at guessing its performance:

There is also a lengthy discussion in his comments.

Additionally, there is a similar but less elaborate device demonstrated here.

Moving up, thanks to Scott Lowther,  we learn about this weeks amazing demonstration of a human powered ornithopter. This wasn't made in a garage, but  was a college project with a fair amount of resources and degrees involved. Of course we are going to let this one slide because...
Well, because  HUMAN...POWERED...ORNITHOPTER!!
Moving higher still in both latitude and altitude, two Danes plan to launch a test flight of their homemade manned suborbital rocket next week. 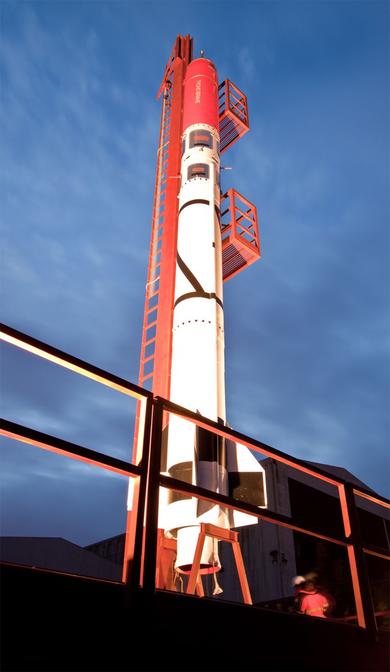 The Tycho Brahe capsule is a single passenger capsule with a full view through a polymer plexiglas-dome so that the person can see and experience the entire ballistic ride.

An older article is here and was linked to at the Secret Projects Forum where this excerpt inspired some discussion....

An aerospike on top of the plexiglass should hopefully blunt the full shock and thermal effects acting on the dome, the designers said.

(It was that word "hopefully" that really stood out.)

Finally, via Instapundit, we learn about a gentleman who has built his own satellite! The satellite will flash morse code messages to Earth (and no doubt give George Noory lots of calls). This fellow intends to fork over 100 grand to have it launched..perhaps he should just talk to the Danes.

1 What do the science babes think of this?

2 They approve of course