Space News Via Rand Simberg comes news of a particularly intriguing study for a spacecraft .

The Nautilus-X MMSEV is on one level a flight of fancy given current budget constraints and launch cycle times, but it is really interesting in that it leverages a lot of existing and very near term technologies and builds on a rational development of the current commercial systems. The full powerpoint is here.

The design is a habitation module with a variety of well thought out facilities for scientific research and a variable gravity deck. The whole design uses largely off the shelf or soon to be off the shelf components being developed by space industry. Bigelow's inflatable modules are the most obvious of the available parts but the big gravity deck is claimed to be a straightforward development of spin stabilized comsat technology and of course the sensor pallets manipulator arms and EVA packs are all the orphans of the soon to be ended Space Shuttle program. Even light craft for landing on an asteroid or the moon are a mature technology given that the LEM worked. 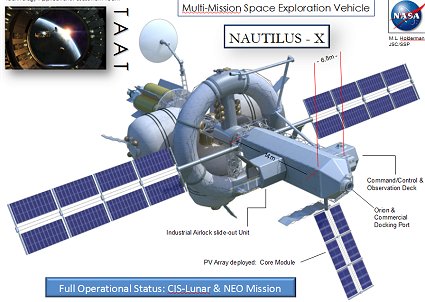 The whole thing is to be attached to a propulsion module. In the illustrations that module is NASAs perpetually around the corner VASIMR system. However, if, as is proposed, the vehicle were set up at a Lagrange point, it would already be beyond the Van Allen belts, so the big problem with conventional ion engines ( that their slow acceleration would keep them in the radiation belts a dangerously long time) is rendered moot. The design can travel to the moon as well as near earth asteroids like Cruithne. There are long term expansions of the design for exploration as far afield as Mars, the main belt and beyond, but those are even farther beyond our budget horizon.  I suspect it could form the design basis for a cycler.

Clark Lindsey points out in the article that as ambitious as it is it dovetails nicely with a lot of technologies needed for and planned by comercial space companies, such as a Lagrange point fuel depot. If that infrastructure is developed privately, or in response to prizes, then this sort of design becomes tenable without too much effort. It is already designed with commercial lifters and spacecraft in mind, eliminating the need for NASA to spend taxpayer dollars on money holes like Orion/Ares.

/-- It illustrates how the use of Bigelow style expandable modules provides for great flexibility in design and in the means of delivery. /-- It takes direct advantage of the tremendous experience in assembling structures in space that NASA has gained in the past decade. NASA knows how to do this. /-- It would work very well with fuel depots. /-- The contrast is striking - Constellation would have had small, single-use, expensive systems in operation perhaps by 2030. MMSEV would be a honest-to-goodness space cruiser in operation by 2020. /-- The first pass at the design cost and schedule finds it cheaper than the Orion capsule alone.

Emphasis mine. That last inspires much skepticism, but in fairness, Orion was not only a cost plus contract but it was designed with maximum pork in mind.

) We might still cut the NASA budget by a considerable amount if we focus on astronomy and this while leaving the development of new boosters to Space-X and others.

This could potentially be part a net savings, albeit in NASA which doesn't actually show up visually on a pie graph of the US budget.

Additionally, opening up the vast mineral reserves of the asteroids is an investment in the future in exactly the same way that high speed AmTrack isn't. Visiting near earth asteroids to learn how to deflect them in the event of an incoming Tunguska is in keeping with the defence function of the government, (analogous to flood control in this case), so it is not entirely beyond the realm of possibility that something like this might see the light of day in the current environment...just bloody unlikely.

The stimulus bill has poisoned that well for some time but this sort of thing does warrant some attention in the near future, assuming we get our fiscal house in order.

In the meantime, Bill Whittle has further words on the issues with cost-plus contracts and pork as well as how to avoid them...which dovetails into  a good overview of current commercial space activities.

Watch it, it's only 10 minutes and Whittle covers a lot.
***********
Regards that mention of asteroid defense mentioned earlier, Pejman Yousefzadeh deconstructs a rather disingenuous leftie meme about tea partiers, strict constitutionalists and space defence. Namely the rather idiotic notion that because there was no means to deflect asteroids or comets in 1789 it must be considered unconstitutional by conservatives and libertarians.
**********
While we are on the subject of guarding against things from space it seems timely to visit this proposal to replace NASA and much  of the USAF's involvement in space with a non-DOD affiliated organization under military discipline modeled on the US Coast Guard. PDF here I think this has a lot of merit. Certainly the civil service model is sub optimal and in any event some branch of government would eventually be necessary for safety inspections and rescues in  space. It makes sense that it be a limited gendarmerie along the lines of the USCG (probably operated out of the DOT) that can handle the job while being non-unionizeable and able to deal with things like debris mitigation both directly and through enforcement. The USCG gets along well with the public and does scientific work as well so this might be a good fit that would avoid wasteful duplication down the road.

**********
All this talk of asteroids and comets....where are the comets coming from? Tyche possibly. We've covered this before but Tyche (which seems more likely to exist than Nemesis ) is in the news again. 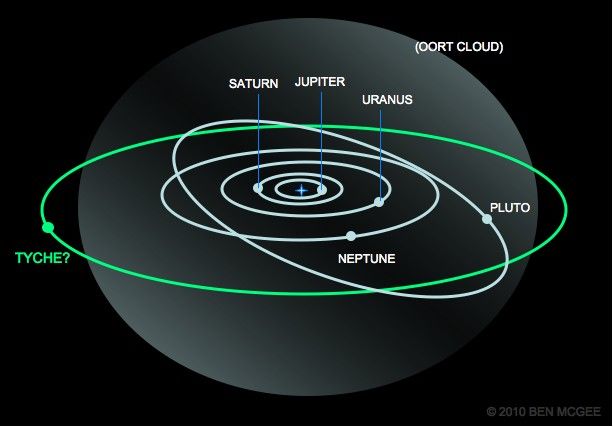 More here. There is growing evidence that a big gas giant or brown dwarf is in our solar systems Oort cloud.


Finally this scientiffical type post would not be complete (or worthwhile) without paying all due respect and homage to one of those who made it possible: a member of the Brickmuppet's Crack Team of Science Babes. 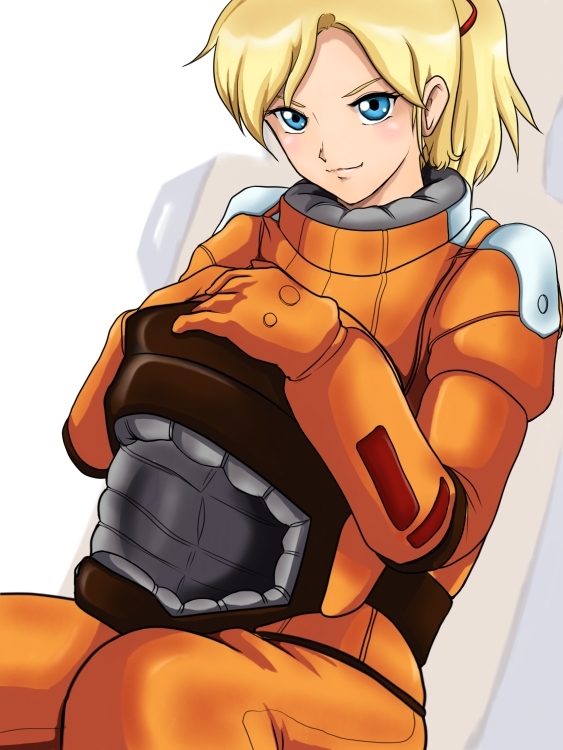 In this case  ZZGundam's Elle Vianno as rendered by by Monocoque