Meanwhile, In Outer Space One of The Brickmuppet's Crack Team of Science Babes brings us news from the International Space Station, where...
...Huh. 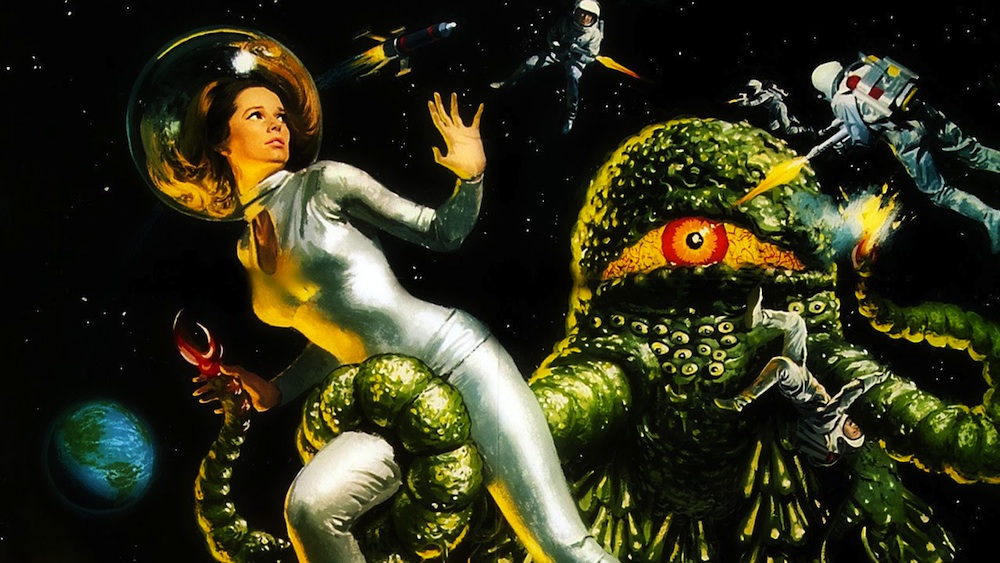 OK. She seems busy at the moment.
While we wait for them to get things situated, here are some more links referencing this story.

Scientists on board the ISS are reported to have discovered living organisms when taking samples from windows.

Note that they mean the outside of the windows...on the Space Station.
It seems that the organisms are terrestrial marine plankton. though how they got up there is unclear. My initial guess would be cross contamination from 0-G plankton experiments, but the C-Net article suggests air currents or the possibility that the plankton originated from Florida where much of the station was launched from (though that would mean the plankton had survived a rather long time).
Of course all of this is dancing around the fact that there is living greenery on the outside of the space station and we all KNOW what that means.

1 All sorts of interesting questions here:

Were the plankton actually *actively* alive on the exterior windows (implying that somehow they had a liquid medium to operate in), or were they only dormant and able to be reconstituted? Were they trapped in some sort of interstice where water remained liquid, or were they vacuum-dried?

"Have You Ever Seen The Blue Sky?" This is a disturbing hour and a half that went viral and gained two hundred million views in less than a week before being banned by the Chinese Government.

It even attracted praise from the newly-installed environment minister, Chen Jining, for its contribution to the national debate on public health â€“ but that was before it was abruptly scrubbed from the internet on Friday, ordered offline by the Communist Party's central propaganda department.

The segment that begins around 1:00 is disturbing in an entirely different way..as it highlights just how precarious the Chinese industrial economy actually is.

1 This is a country that *needs* nuke plants.

It seems like they do have plans to build them, but they are projecting out to 2100 for any significant fraction of their capacity to be carried by them.

Projecting anything to 2100 is like King George III planning the future of his American colonies.

VOLCANO SHARKS! One of The Brickmuppet's Crack Team of Science Babes reacts to a report about lava loving hammerheads.

"Can we get LASERS for them?"

In order to study the volcano, Phillipsâ€™ team used robots and cameras. While the volcano was not erupting, the images are blurred by orange plumes and bubbles. Carolyn Barnwell, writing for National Geographic, said that in the video "carbon dioxide and methane gas bubblesâ€ can be seen rising from seafloor vents, and that the color of the water was "due to reduced iron and sulfur.â€

Phillips and his team were shocked to find both hammerhead and silky sharks, in addition to stingrays and smaller fish, swimming around inside the volcano

Presumably,  the sharks leave when the caldera fills with lava so this is not actually a Sci-Fi channel movie made real. OTOH it is hoped that this might lead to an eruption prediction system.
Of course, if the sharks preternatural predictive ability amounts to "Hmmm...getting a bit hot here...Let's leave." Then the potential implications are less exciting.

New Horizons LIVES! One of the Brickmuppet's Crack Team of Science Babes reacts to the news that the New Horizons Probe has successfully reestablished contact with NASA.

One thing thing that they added to the list of discoveries is that the planetoid is rather larger than they had thought.

Preliminary images and instrument readings show that Pluto is much larger than scientists had expectedâ€”about two-thirds the size of Earthâ€™s moon. By the most recent measurements, Pluto is about 1,472 miles in diameter, making it easily the biggest planetary object beyond the orbit of Neptune. 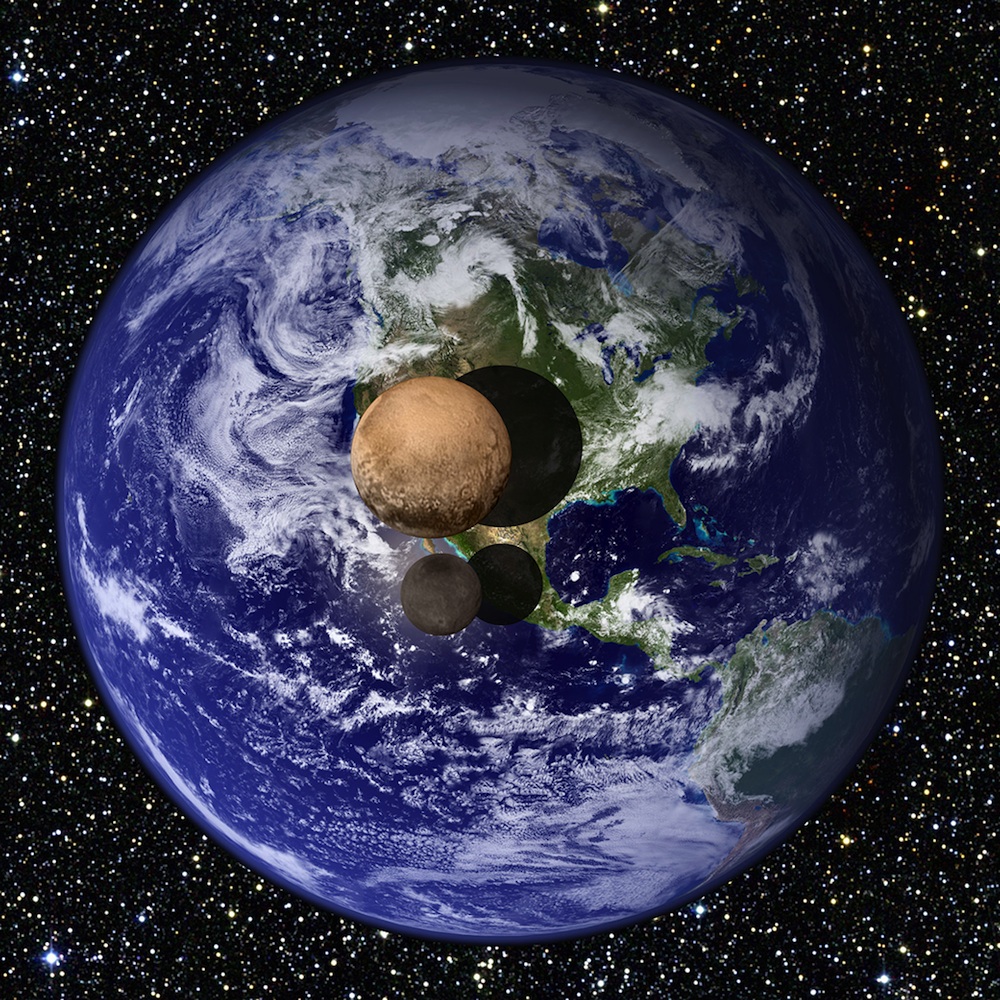 Pic via.
It will take some time to get the closet picture processed as the data transmission rate is agonizingly slow, but this pic taken before the probe turned all its antennae on Pluto and its moons gives some idea of what to expect. 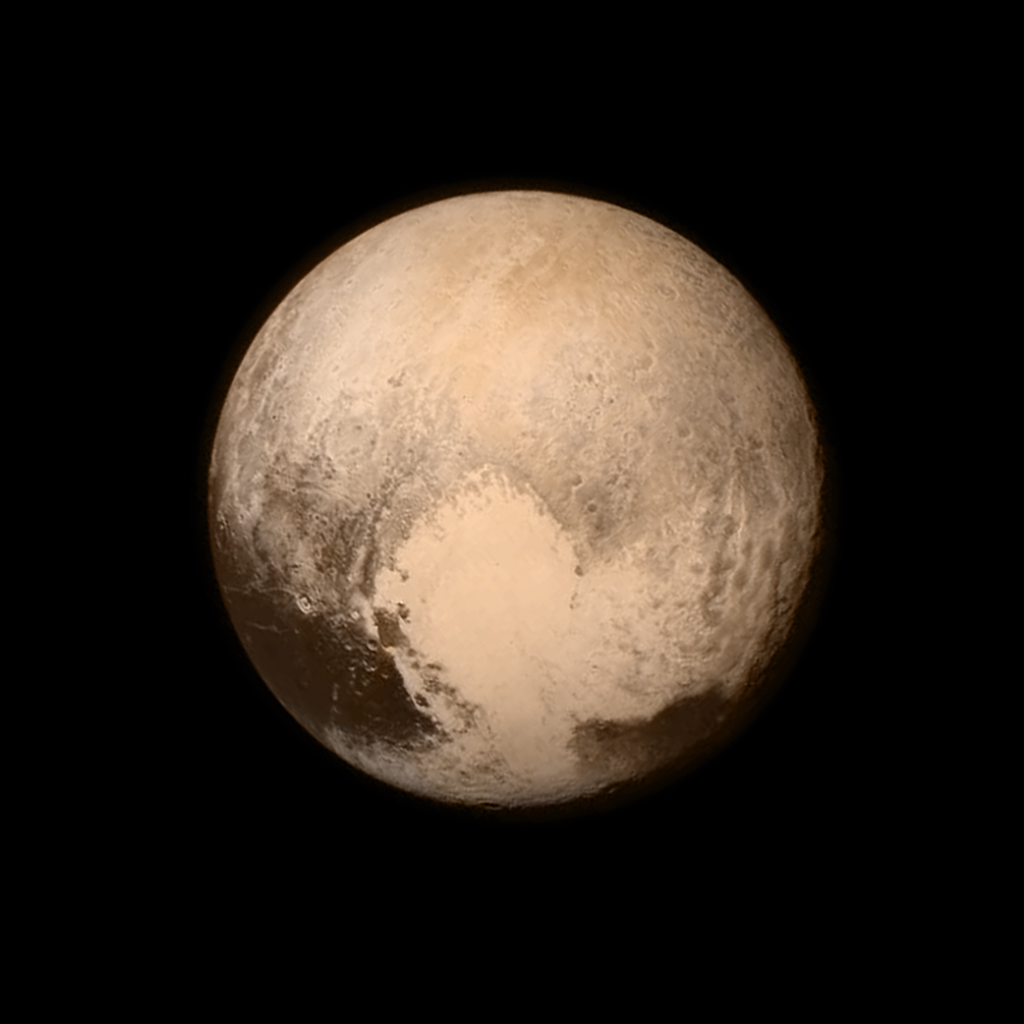 1 And until about a month ago, our best photo of Pluto was this.

The Mi-Go Are Happy to See Us? One of the Bwikmuppet's Quack Team of Science Babes helps us interpret the most recent data from Yuggoth Pluto. 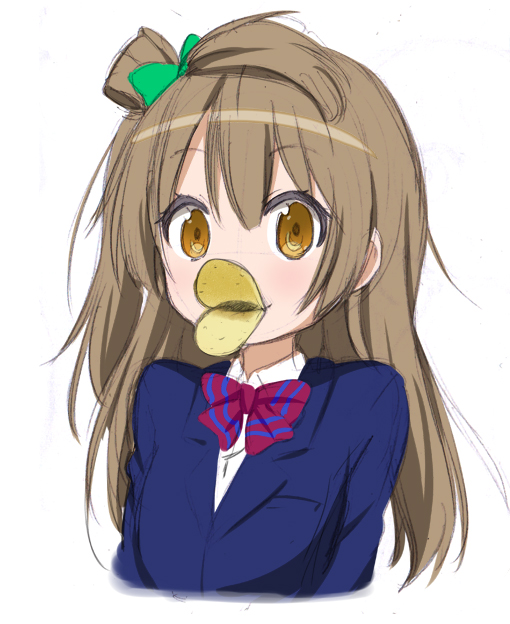 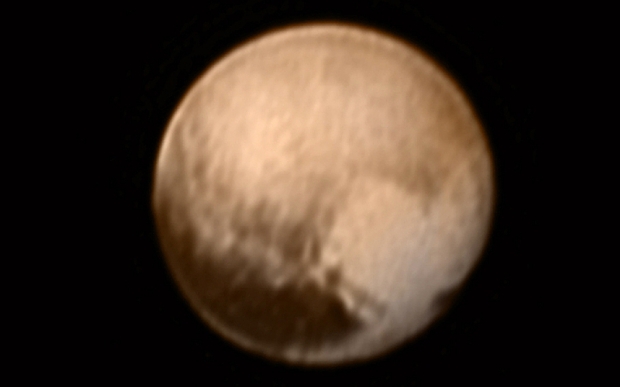 As to the pattern-spotting, it's unclear if the formation in what appears to be the southeastern quadrant* is a cloud or a surface feature. The Telegraph says it looks like a valentine, but here at Brickmuppet Blog we also can make out an anglerfish or perhaps, Hem Dazon.
*Compared to most other planets, Pluto is a bit off kilter anyway and, in any event,  New Horizons is coming at it from an odd angle so it's probably not really the southeast.

1 When out by Pluto, one should probably whisper...

2 When out by Pluto, one should probably spend a lot of time shivering...

3 In a way, Steven, you're exactly right.

4 (Notice I didn't say why you were shivering.)

This....Is....HAPPENING! One of the Brickmuppet's Crack Team of Science Babes follows up on the information she provided us a few days ago...
...and provides her usual thoughtful analysis.

'The awesomeness of this is Brobdingnagian!"

1 Oh, it sounds like a fun time for all now.  But mark my words:  someone in the Federal government will forget to secure their servers, and the AI program from a drone will leak out onto the Internet and into the fighting robots.  And then...  https://www.youtube.com/watch?v=Emdzsz_XvfA

2 In other words, it's all fun and games until someone loses an AI?

Techweasels
J. Greely has thoughts on  the most recent information regarding Windows 10.
(Language Warning.)

Additionally, two of The Brickmuppet's Crack Team of IT Babes share their thoughts on the matter. Happily, since the .gif has no sound, no language warning is necessary.

1 Has anyone proposed any reasons for this "new and improved" feature?  I can't think of any...

2 It makes it easier to share your home wifi with friends.  Remember, we're probably not a representative sample of users.  Theoretically, though I coubt in practice, it would make stronger wifi passwords more acceptable, as you wouldn't have to walk everyone through entering a cryptographically secure password when they come over

And the only sure way to "opt out" is to make your wireless network incompatible with printers, Kindles, etc.

4 Oh yeah, it's incredibly stupid.  But I'm guessing at what the initial thought behind the system was, not the  practical issues

6 I strongly suspect that if I asked some of my friends who are still with the borg, they'd be able to name the VP whose pet project it was. And that everyone who pointed out the legal and other problems was "encouraged" to overlook them. The "make the world change their networks" opt-out has that sweeping arrogance that just screams Microsoft VP.

It flew under the radar with Windows Phone, because not that many people actually buy them. I suspect the number of network managers who've actually seen a Windows Phone in the wild is quite small. :-)

Well Then...
In an earlier post, we made a prediction about the "killer ap" for Sudobashi heavy industries most recent product line.

Now one of The Brickmuppet's Crack Team of Science Babes has some analysis of recently released video evidence that we may have been correct.

OK. that's not actually an analysis. It's a squee. However, we find ourselves in  complete and enthusiastic agreement with the sentiment.