This fellow made a gyrocopterhelicopter out of scrap metal and a lawnmower engine!

These are puportedly the same guy and same machine but the two vids show vehicles that appear to be operating on different principles. It may be that the autogyro was modified at some point to be a full helicopter which would make sense if the guy was learning as he went. Autigyros are rather more simple and helicopters are such an abomination against physics that the inventor may have wanted to get one half of the whirlly bits right before trying for the full Sikorskey.

Of course, they may  also be unrelated machines.

Peak Metals Robert Silverberg holds forth on the rapidly declining reserves of Gallium and other rare but useful metals.

Over at Ars Technica, Ethan Gutman has an analysis of this and concludes that the situation is, unsurprisingly, neither as dire as the  worst predictions, nor as rosy as the more pollyanish takes on this have been.

Ultimately this planet has limited resources. However, even putting aside the obvious merits of recycling, Mercury is likely to be exceedingly rich in heavy metals and most other things we need for an industrial civilization can  be found in some abundance from the moon to the outer planets.  There is no reason to panic, but there is one more reason to work towards cheap access to space.

1 The problem here is, mining will not drive development of CRATS in any form until the situation is really dire. Secondly, the lead time on the space infrastructure is decades at best. Investors simply cannot plan that far. So, we have a problem of bootstrapping. No matter what happens to rare metals, the space transport is not going to be developed without a near application (such as tourism). We have a perverse situation where luxury jaunts for multi-billonaires may be key for civilization's survival.

And I Just Ate Too.... A pig with a monkeys face has been born in China.
Now a deformed farm animal is not normally news but the picture was disturbing enough to make me shiver...thus it warrants discussion about this stories implications.

The way I see it there are 5 possibilities here...
1: It is a bizzare but random mutation, the snout and jaw, shortened enough to give the piglets face an almost human face and the Brickmuppet nightmares.
2: As above, but not quite as random, having been triggered by the appalling pollution levels in parts of China.
3: This was an in vitro fertilized pig and due to incompetence at a government facility this farmers sow was accidentally impregnated with one of those human animal hybrids that Leon Kass gets the vapors over. This is possibly part of a program to grow transplantable organs or to make Chinese pigs taste even more like pork.
4: Its a pod pig.... the  Body Snatchers are in China. Head for the hills. Trust no one.
5: It's a pig thing...you wouldn't understand...but you should react as in #4.

Scenarios 1&2 can be safely dismissed in the interest of fearmongering and hysteria. #3 is disturbing in a Soylent Green / Clonus Horror sort of way but points (tangentially) to the distant possibility of catgirls being developmentally just around the corner. Scenarios 4&5 pretty much just suck and have no silver lining that I can see....
Anyway, discuss....

An albino humpback whale is making waves near Byron Bay Australia*.
While whales making waves are not news (they tend to splash a lot) albino whales that have made it to adulthood certainly are.
Migaloo, as the animal is known, is the ONLY white Humpback known in the world. 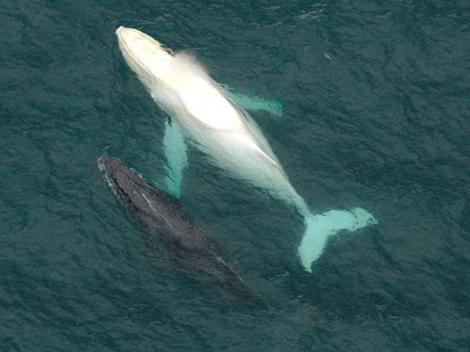 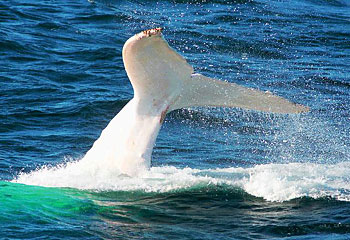 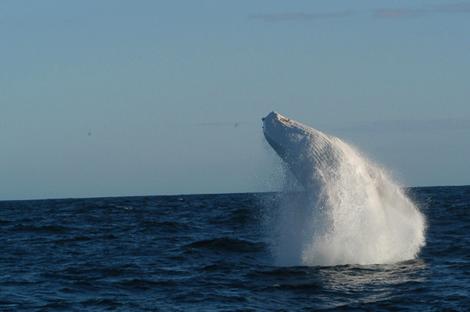 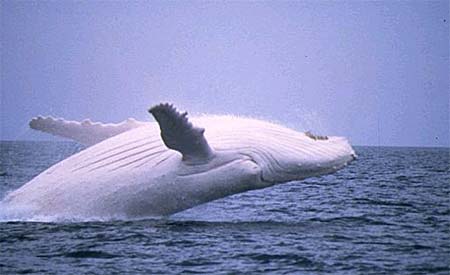 In  related news, the Japanese Whaling Industry managed to compound the PR debacle that is their very existence, by issuing a "no comment " when asked if their ships would spare the ultra-rare and easily identifiable cetacean.

Only one response comes to mind....
(* For Mee.Nuvians, that's on the east coast about 220 miles north of Pixyville )

1 The temptation to make Melville jokes is nearly overwhelming, isn't it?