INCOMING! One of The Brickmuppet's Crack Team of Science Babes brings us news from the world Astronomy. 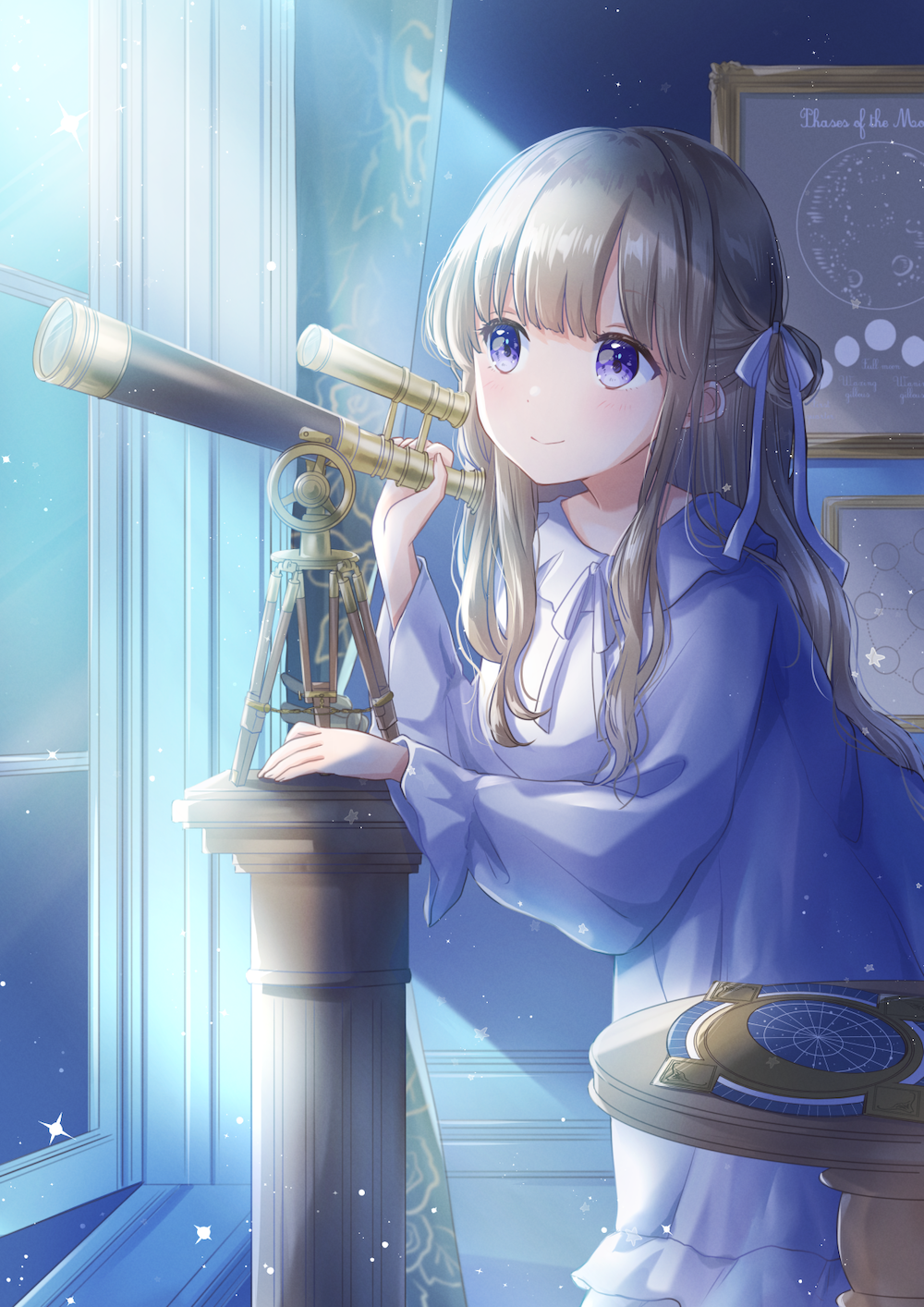 Art by Mato Hoshibara. She can be supported on Fanbox.
It appears that a planet is entering the inner solar system.
It's technically a dwarf planet...but I don't think we can say dwarf anymore so revel in the clickbait.
It's also a part of the solar system, specifically the Kuiper belt and is just on a really long orbit that is bringing it into the inner Solar System, so, it's basically a comet. However, 2014 UN271 may be more than 200 miles in diameter and probably qualifies as a Dwarf Planet. (Oh, looky there, I said it.)
This appears to be a big Trans-Neptunian Object like Pluto, Eris, or Makemake, which scientists are eager to visit, but are so far away (much farther than even Pluto) that the expense and time required for such missions mean that they are unlikely to be visited in the foreseeable future.
2014 UN271 however, is coming to us! On Saturday, April 5 2031, the object will reach its closest approach to the sun, just inside the orbit of Saturn. 10 years is long enough that a mission can be put together and while Saturn is way out there, its much easier to reach than most of these things. This could be really cool.
There are a couple of things about this object that are speculative; one is its size, which is anywhere between 60 and 230 miles across, the reason for this is that it appears to be outgassing already even though it's beyond Neptune right now. If so, it probably is covered in very low melting point volatiles. This COULD mean that even being beyond Jupiter  when it turns back, it could be a truly spectacular comet. 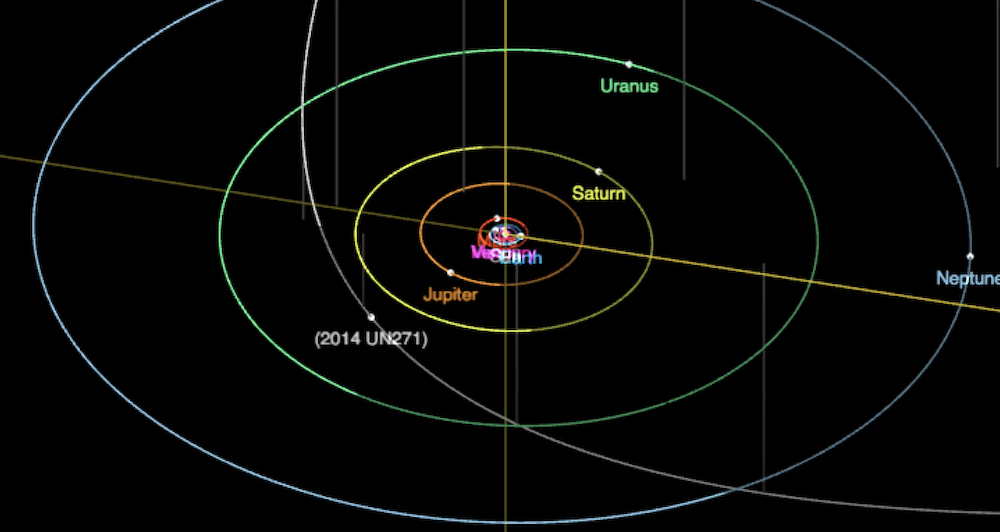 Leaving the staid realm of orbital mechanics and engineering for a moment to wandering into the whackadoodle speculations of history majors, it should be noted that in addition to the scientific bounty this TNO brings with it some spectacularly unlikely potential for hijinks.
These objects appear to be made largely of tholins, ice, and frozen nitrogen. Nitrogen is something that one needs a LOT of if one were (for some reason) going to, say, terraform Mars, and planetary quantities of nitrogen that are accessible are hard to come by. So I could see Elon Musk sending some rather desperate expedition to this thing to set up some mass drivers and frantically mine it for its nitrogen, water, and organics during the few years it is within shooting distance of Mars, all the while frantically hurling blocks of volatiles towards the red planet, maybe with foil screens around them to ensure they don't completely evaporate before impact. This is a dubious prospect for a whole host of reasons but it might make a great story.
One nomenclature note, the object is currently given the tentative name of Bernardinelli-Bernstein, which is WAY outside the normal, mythologically inspired names for such things, but is completely in line with how they name comets.

1 Terraforming Mars is slowly becoming a plot point in the novels of my future history.  Are there some not overly technical articles you could recommend to better inform myself?  Thanks!

2 I've heard good things about this book.
The reviewer, Geoffrey Landis, is a NASA scientist and a SciFi writer who has written several papers on matters of interest.
Landis and Gregory Benford have both published papers on terraforming the moon, but I can't find any of them online at the moment, still, if you have access to a university library or research gate you might find it via those names.

Robert Zubrin's last few books give a VERY cursory overview of terraforming techniques for Mars.
This short paper has some hyperlinked citations that may be of interest.
A post over a Crowlspace has some figures, but few citations.
A paper on Terraforming...uh...Ceres...is here.
Theres a bit on settling Venus via cloud cities here and in the links to this old post.
Note that while I tentatively support terraforming Mars as a sort of modern cathedral and vanity project, I'm much more in the Dandridge Cole/ Gerard O'Neal camp in that I think the long term and superior way of settling space is by big habitats like the Stanford Torus and the Island One cylinders.


Note too that I've got a bachelors degree in History, which is a degree exquisitely untainted by any practical expertise in such matters.

3 From a "harvesting the riches of space" argument, I agree it makes very little sense to expend massive amounts of energy to get out of one gravity well... only to go down another.
I skirt this by noting population pressure:  in two generations my Earth is in a full-out Maunder Minimum, if not ice age, just as the Russians and Japanese were able to turn about their demographic implosions.  The people of the nations of the Polar Alliance need a place to go and Mars fits the bill.
Thanks for the links; much appreciated!

To go to from anywhere else, it's not down.  To try to go there from your blog?  It's down.  Odd.

7 If we could land a probe on it, we could get a free ride to wherever it's going.

8 From a "harvesting the riches of space" argument, I agree it makes very little sense to expend massive amounts of energy to get out of one gravity well... only to go down another.

Problem is, most of the "riches of space" that haven't been collected down a gravity well are spread out in tiny pieces across vast distances. Any sort of "Belter" civilization would be less "Carribean pirates in space" and more exceedingly patient and foresightful collectors of metals and volatiles (usually different types of asteroids in different orbits), since it'll take them years and kms/sec delta-V to hop from rock to rock.

Ceres might be one location it makes sense to establish a colony though for collecting volatiles. The gravity is light, it's in the inner solar system, and it can provide hydrogen reaction mass for arc-jets for inner-system transportation systems.