Obviously, Nuclear Weapons are More 'Splody in the Arctic Alex Wellerstien's Updated Online Nightmare Facilitator has a use other than depriving people of sleep.

It helps one to visualize the extent of distortion in a Mercator Projection. 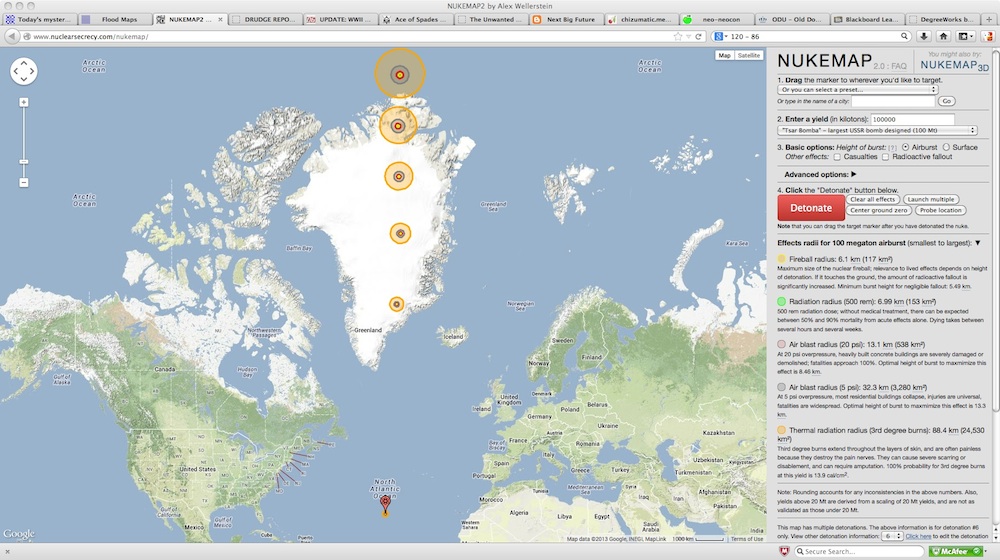 1 Another interpretation:  The closer you get to Santa's workshop, the more that naturally occurring radioactive deposits boost the yield of nuclear explosions.  What did you think caused Rudolph's nose to glow so bright?

Elon Musk's much hyped and speculated about design for a transportation system which was unveiled today. The 57 page PDF is here. One of the Brickmuppet's Crack Team of Science Babes is on the case trying to digest all that info...(or at least digest a sweet potato).

It turns out that this concept is not the vac-train many people predicted so it doesn't have the same technical issues that people have been bringing up for the last few months. It has completely different technical issues.

I think the notion that right of way issues are no greater than power-lines is wildly optimistic as well as discounting what a legal pain running powerlines can be. The idea of using Inrerstate Medians is a good one that we here at Brickmuppet Blog have long thought to be the only viable right of way option for new rail lines...assuming they could be made economically viable (a BIG assumption). However, keep in mind that attempts to expand a commuter rail system ON EXISTING RAIL LINES here in Hampton Roads faces environmental impact statements and studies that will take up to a decade for some proposed lines. An attempt to install high speed rail tracks next to the existing AMTRAK rail lines is facing a similar issue and delay. The extension of the northeast highspeed rail corridor south is actually an idea which makes good economic sense (unlike most US HSR proposals) but even using existing infrastructures for a well understood technology is taking decades and costing millions before any tracks are even laid. This new tech will give the regulators all sorts of ammunition to mandate all manner of studies. So there is at least one huge political/legal hurdle not addressed.

As to the technical issues, this is a bit out of my comfort zone, but I'm a tad skeptical of the 100% solar power idea (particularly north of the Mason Dixon Line)  and maintaining pressure differentials in well traveled tubes measured in megameters looks to be challenging to say the least.

Brian Wang (who tends to be very sanguine regards mass transit in any form) is running the numbers here, here and here. He looks at the costs here.

That little potential asphyxiation issue notwithstanding this is a very interesting proposal and I'd really like to see something like this made viable.

However, the biggest red flag is not technical or legal...it's Elon Musk. This is something that Ace touched on the other day and I think it's valid. With the exception of Pay-Pal, all of Musk's business ventures have involved government (via taxpayer) subsidies. Tesla and SolarCity are totally dependent on this sweetheart deals and strong-arming rivals via his patrons in congress and CalGov. Even Space-X which is an inspiring and innovative endeavor, exists because it was awarded the space station contract while other less politically connected companies were passed over (perhaps justifiably, perhaps not).

We here at Brickmuppet Blog would dearly like for this to work... But given Musk's past business models the thing this most reminds us of is.....

1 At least in this part of the country, interstate medians are largely wetlands, and trying to build in them would cause the enviroweenie law-scorpions to strike until they break the stinger off in the proposal.

2 There is at least one other company that's got a contract to deliver to ISS, but they're probably another year from launch.  Orbital Science, at orbital.com.
That doesn't detract from your point about Musk.

3 First Antares launch with Cignus to ISS is slated NET Sept. 15, 2013. So I would say that Orbital are "probably" less than another year from launch. This will be the last COTS flight. However, the Orbital CRS delivery is planned to commece with a December flight, which is still significanly less than a year from now.

4 By the way, I'm wondering just who the "other less politically connected companies" might be. Does Ace even know that ATK tendered an entry too? Or perhaps he liked George French wasting 168 million dollars?

5 T-Space was the big one that comes to mind. IIRC Space-X got a big infusion of government cash about the same time Tesla did. Whether or not this pushed them ahead of their competition is debatable. Space-X already had some successes. However Musk's other post-Paypal outfits certainly  exist because of government largess.

Don't get me wrong I really like what Space-X has done and am not nearly as down on them as this fellow is.

In fact I think including Space-X in this post was a bit ill-conceived on my part.

I confess I read ACE's post but not he article he linked...which focuses a bit too much on Space-X and in fact is written by a fellow with connections to ATK. (See my later post)

Time to Give A Shout-Out to IndieGo-Go Recently we discussed the potential KickStarter has for shaking things up and bypassing normal gatekeepers and FTC issues.

Well, they have issues of their own.

According to PopSci (link via Rand Simberg) Kickstarter recently made a small, quite specific, change to their terms of service. one that RETROACTIVELY removed the stretch prizes from an already funded project.

The project, to create bio-luminescent plants, received $484,013 of a $65,000  goal by the time funding closed and was going swimmingly until it attracted the ire of some...I dunno...luddites or something who, on May 31, started an online petition to get Kickstarter to block the project. Kickstarter knuckled under on July 1.

This is bigger than depriving the projects $40.00 backers of their glowing leeks...this is an ex post facto decision breaching a contracts in response to an internet petition.

Which brings us to Indiegogo which is another outfit with a similar buisness model that few people had heard of before Kickstarter decided to spurn the faint green light of and embrace the darkness of anti GM hysteria....and break contracts.

So lets hear it for Indiegogo...at least at the moment they don't seem to be opposed in principal to biotech startups.

...and all that that implies.

Kickstarter does good within what appear to be self imposed limits. Beyond those limits it's good to know that there is competition.