In Defense of the Formerly Icebound Adventurers (Updated) 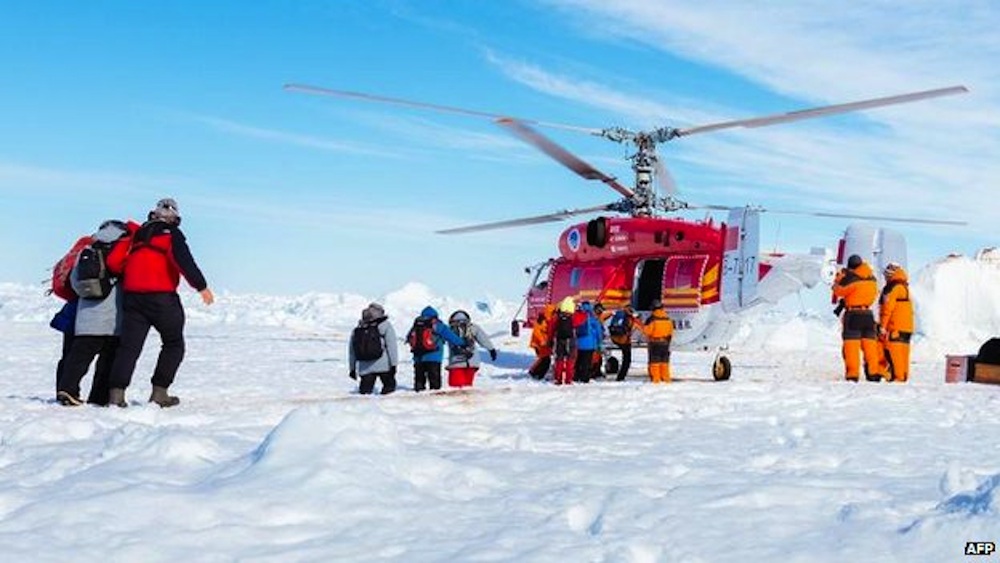 Now that the passengers, both scientists and dilettantes have (thankfully) been rescued from the Akademik Shokalskiy I feel the need to come to their defense with limited snark.

I think they are getting a slightly bum rap.

The NYT has a piece denouncing the expedition as disrupting 'serious' science. The short version of this is that the rescue of this expedition is seriously impacting the logistics of other scientific endeavors on the frozen continent.

This is technically true as their article points out...French, Chinese, and Australian icebreakers were all in route to, or offloading supplies at base camps for other scientists when they were called to assist a vessel in distress. The NYT suggests that these endeavors were all more legit than the research being carried out by the self funded expedition.... They do note however that the expedition leaders are not novices at this...

So what is the problem here?

But the bungled trip now threatens to tarnish the wider field of Antarctic science.

The NYT is denouncing these recently quite highly regarded scientists because they encountered a (thankfully non-fatal) mishap that for their political allies has politically problematic optics. This may or may not be fair...but I'm pretty sure that the Old Grey Lady didn't have a problem with the expense and disruption involved in this.

Stuff can happen....especially in Antarctica...to the best equipped and most professional. Ask Captain Scott.

The Spirit of Mawson Expedition went into an extremely unpredictable area about which not a lot is known. THAT'S WHAT SCIENTISTS DO! They made a discovery, probably several, because, rest assured freezing and stranding the ship was not part of the plan. It was however SCIENCE happening all around them getting steadilly thicker and they observed it. Science often involves  goeing into the unknown and that entails some risk. Antarctica is unpredictable and dangerous...that is why people don't live there.

Then there's this from the NYT article.


Particularly vexing is what seems to be a devil-may-care attitude expressed by some of those on the trapped ship.

Oh my stars and garters! Bravado in the face of danger! How gauche!
What the HELL else are they supposed to do...cry? Be overly dramatic regards what was did not seem to be a life threatening situation? Sit down in their footsie Pajamas drink cocoa and talk about health insurance? Oh...right...NYT.

Well...as far as I'm concerned this is a feature and not a bug. Props to these guys on that score at least. In fact it's cold enough there that even I wouldn't begrudge them footsie PJs! Besides, they did what scientists in the field often DO... they stuck with it, kept calm and kept observing. Read about Roy Chapman Andrews (Combat Paleontologist) sometime. The fear that they were so politically motivated that they would stay and get someone killed turned out to be unfounded. It looks like they did not flee prematurely nor too late.

Let's review...A freak storm and cold snap stranded their ship. Now because several of the scientists are allegedly* outspoken advocates of AGW theory and associated economically dubious mitigation efforts...and ALL of the on board patrons are,  those of us who are a bit skeptical of their political stance on this issue had a good hearty laugh at the amusing irony of the situation, This is not that different from what our our political opponents did here and here...except for the minor detail that no one was laughing at innocent deaths.

That being said, while I think that much of the amusement on the right is understandable in that context, I think we should cut these adventurers a break.

One of the non-economic complaints about AGW science is that it relies too much on models, which are only as good as the (necessarily incomplete) data put into them. The models don't seem to have been reliable in predicting recent trends.

These scientists went to an area that had been extensively surveyed about a hundred years ago but has been largely unobserved since in order to collect data on how it has changed over that considerable time...this is exactly the sort of research we want done. The scientists who led the expedition reportedly have a theory that carbon emissions are dramatically affecting the climate. So they went to test their theory in the field. THIS IS SCIENCE!

There seems to be much hand wringing over the fact that this expedition was funded by rich patrons who got a Antarctic vacation out of it (admittedly a  much more exciting one than they anticipated). Well that is the way science was normally done for centuries. There's a limited pot of National Science Foundation monies and this delightfully free market model demonstrably works (this is proved by them getting there and discovering way more ice and colder temperatures than they thought. ) This sort of model seems a very good compliment to the generally successful NSF model.

Now...If the scientists had been looking for Antarctic space NAZI's and their saucers or something I'd be a little more sympathetic to the argument that their mishap disrupted legit research needlessly...but whatever political quibbles I might have with their patrons, they displayed the courage of their convictions with cash and their presence and I salute them for that. As for the scientists , they put together an expedition to a largely unknown area where they tried to TEST THEIR HYPOTHISIS.

"And science is AWESOME!"


UPDTATE :I'd resigned myself to being the only righty who thought this, However Moe Lane expresses similar sentiments rather more pithily. He also cuts to the heart of the matter.


...it is remarkably embarrassing, which is why the NYT is so aggravated about the whole thing.  To the point where they’re retroactively trying to throw the expedition under the icebreaker.  As if it’s the Spirit of Mawson’s fault that the ice is still there…

* I've not found a primary source  on this point.
Animated .gifs are from Nichijou, which is unrelated to this matter. It is also (like science) awesome & should bring a smile to the face of anyone regardless of political preferences.

1 What I'm worried about is the crew of that ship. They didn't get pulled out; they're still there. That ship isn't an ice breaker, and its hull could get crushed. What if that happens when weather is too foul for another helicopter rescue? (Or what if there isn't a helicopter around at the time?)

2 The ship is built in Finland and is ice strengthened. Pete suggested in an earlier comment that the ship could ride the ice Fram style, and even if they don't have a full Fram type hull that is a possibility. The crew is probably pretty sure it is sound or they would have left. With the passengers gone there is plenty of food. Summer is just starting so they think they can wait for a thaw. The last I heard the ice was over 16 feet deep, so barring an icequake ( admittedly a real possibility) the ship isn't going to crumple if it hasn't already.   If they can save the ship they certainly should however I read somewhere that a British scientist has suggested that this bay is in the process of becoming a long term ice shelf...if that happens the ship may have use as a research outpost.

We'll see...they have the whole summer to find out.

3 Regarding your second update:  Looking back at historical Ice Ages, just how quickly did they start?  And did the ice sheets spread faster on the seas?

4 I'm honestly surprised nobody has claimed that there's more pack ice because the ice has broken free from melting ice caps...

Siergen, no one knows. The data isn't fine enough to calculate the exact speed. It's in the "no more than ten thousand years" realm of accuracy, and that's the best they can do.

As to ice sheets on water -- there's no way to know. No geological evidence left behind.

6 NewsBusters reports that 98% of the stories about the rescue left out the fact that it was a Global Warming expedition.

7 They're free now. So is the Chinese ice breaker.