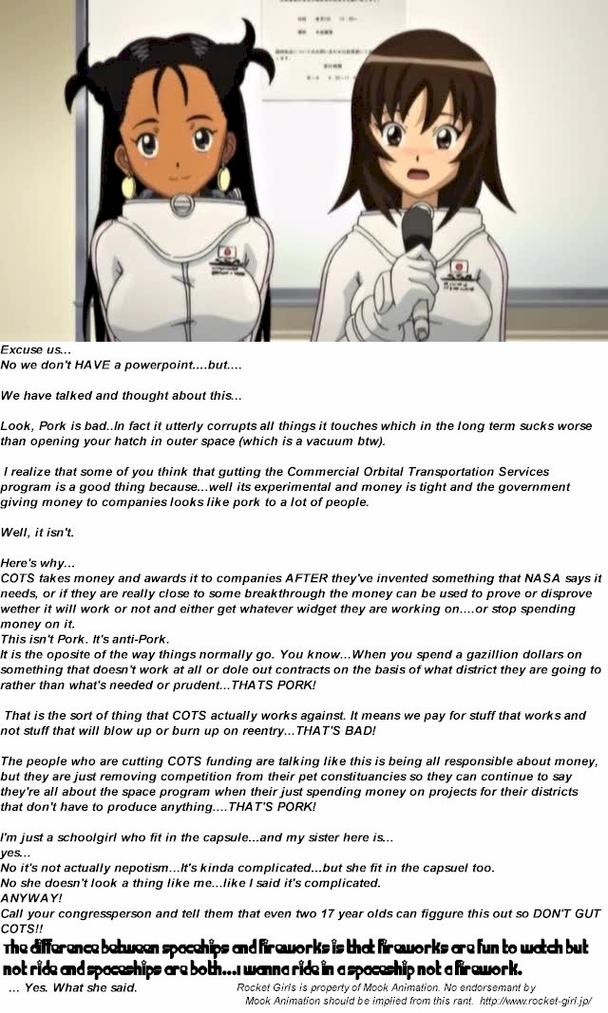 More on the COTS story here , here, here and here.

Rocket Girls are actually the Rocket Girls.....no endorsement of this editorial opinion by Mook Animation should be inferred from this post.

1 I saw "COTS" and wondered why they were commenting on "Crest of the Stars". Then I saw what it really stood for.

Rocketgirls on cots?  I prefer a nice soft bed, but if they want cots...

It's a terrible world when 17-year olds have to worry about exploding cots.

4 Well, now we know what gutter Mr. Duck's mind is in. (Not that he's unjustified, considering how those girls are built. Yow!)

I understand and sympathize (and would be willing to have my taxes raised if they'd contribute some of their time to my cot...) but if we're ever going to make it to the stars -- for good -- then it will be via the private sector.  I don't deny the gubmint has a role (cf. the myth of "Isabella pawning her jewels for Columbus"), but that's not how to bet.  (and yes, I have given cash to private launch companies, so I'm not just some 'chicken-phoenix.').

The COTS program is ...er was an excellent way to help space start-ups. I agree that is space is to have any meaning at all it has to be primarily a private sector endeavor. However, there is a chicken/egg problem as well as dificulty attracting investment from Wall Street types.

COTS allowed start-ups to compete directly with the big boys and often win. A COTS award would give a company the cache' of being aNASA contractor (thereby conveing a sense of'legitimacy' in the eys of investors) without actually mucking the works up the way the cost-plus system does. Also,  big part of the COTS program (initially) was the idea that NASA would contract out  ISS supply to private companies...there was even talk by Griffin of using the program to set up privately run propellant depots!

This, of course terrified the congresscritters as it bypassed the normal district oriented pork flow. How could you assure the sugar daddies in your distrect that the fix is in for them if some small start up company with no K street connections in Pago Pago (whose congrescritter can't even vote) can  develop a new phased isolinear intertial dampening  graviton remodulation McGuffinator...and win a contract without so much as a bribe?

Hence the programes near demise under the new congress.

"Hi, I'm Chris Hansen.  Why don't you have a seat right over there?"

Steven, you meet the most interesting people down in the gutter.

Over at Encyclopedia Astronautica, Mark Wade has compiled a story that has almost everything.

The US Coast Guard