The Romance of Space, Its Rationality and Some of its Fallacies Returning from space after enduring a cosmic ray bombardment, one of the 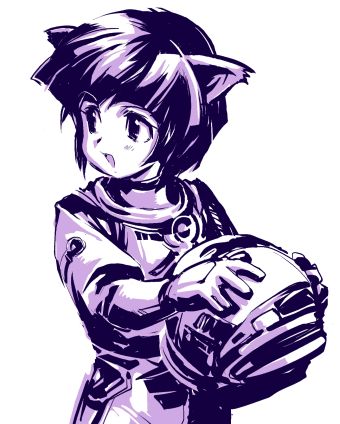 Brickmuppet's crack team of science babes heads to medical to be checked out for any...umm...side effects (oh dear) ...er, but not before pointing to this interesting if utterly blasphemous post at Chizumatic.

In it Steven Den Beste takes up the Sagan argument, namely that we should not be sending people into space because exploration can be done much more safely and efficiently via robots.
I heartily agree that many,  applications can be done better via robots, but I part ways with the assumption that that is the point.

To me the ultimate point of a space program is not exploration per se' but settlement. While it is easy to pooh-pooh the idea that we shouldn't put our eggs in one basket, the fact is that Earth is a small place in the great scheme of things. If we believe that there is any intrinsic value to humanity and its works then we should begin to decentralize our population. This is not an irrational view.

There are other reasons to go into space of course....

A society in the hostile environment of space is not likely to embrace luddism to any great extent as there will be no doubt that technology and its advancement is necessary to survival. (Even the most human friendly non-terrestrial environment in the Solar System....Titan...will require some serious technical skill to live on).

Frontiers are the birthplaces of liberty and innovation. Our own history here in the USA is a fine demonstration of that. Note that these  2 things, Liberty and innovation, are getting stymied world wide by expansive government regulation on one end and rising Islamic radicalism on the other.

Now a space colony is not likely to be the libertarian slackers paradise that some seem to think. Everyone will have to pull their weight and there will be a few things like smoking, serving natto and opening windows that will be disallowed with extreme prejudice. However, what regulation there is is likely to be practical and necessary as opposed to inane.

This last bit is speculative to be sure and is based in those most irrational of human traits hope and aspiration. However these qualities are intrinsic and necessary to Humanities  survival...and they don't figure well into auto-cad.

What can be modeled empirically are the cold equations and they are not nearly as pessimistic as Mr. Den Beste suggests.....

It is true that launch costs are currently exorbitant, but that is due to a series of bad decisions dating from the early 70s. There is no reason that the cost of launching a person into space cannot come down dramatically in a decade or two.

A while back we posted a brief primer on how to get to space without using vaporware like space elevators or anything involving a long lost Tesla patent. Nothing there is terribly far fetched and most has been developed to one degree or another. The problem is misdirected priorities.

Getting to orbit is 3/4 of the battle. Once there the energy expenditures to get anywhere else are pretty modest.

As for long term survival and settlement, assuming that we are using nuclear power, there are places with enough metals, air and water to sustain us if we are clever. With no major breakthroughs necessary, Mars, Ganymede and Titan have everything we need to build large settlements and Titan is particularly benign due to its thick nitrogen atmosphere, which provides good radiation shielding as well as (obviously) nitrogen. There is nothing particularly far fetched about this. All that is lacking is will and money.

Note though that while the math has been pretty well worked out, and the hurdles are not nearly as difficult as they appear such an endeavor is not nearly as easy or as inevitable as some of the advocates assume.

While we strongly disagree with Steven on the practicality and benefits of becoming a multi-planet species, he is right that there is a strong streak of religiosity to some of these space advocates...and not only can they get tedious, they can lobby for and get space programs to go into utterly counterproductive directions.

One of these is the idea that pushing space based solar power will open the stars to us all. Space solar power involves big solar collectors (about the surface area of Manhattan) gathering solar energy, converting it to microwaves and beaming it to big antenna farms on earth where it is converted into electricity.  Now the reasoning goes that putting these heuge solar power satellites in orbit will solve all our energy needs and build a space infrastructure that will make manned exploration of the planets an incidental expense....

OK there are a few problems with this cunning plan....

Launch costs are currently ridiculous...(admittedly that is fixable, see above.)

Additionally, a space based solar power array is likely going to be built by robots.
Well this is about as useful for building a human friendly infrastructure as the current program. Assuming the launch costs are brought down THAT would help but this alone nixes a lot of the appeal that the program has to my fellow space cadets.

"But space solar power will solve all of our energy needs"

Alas no...while space based solar power is theoretically possible it is unlikely to ever be practical. Even given very cheap launch costs or the handwavium of a space elevator it is not going to be competitive with terrestrial power sources such as nuclear power. You have to build these things in GeoStationary orbit...which is pretty crowded and more expensive to get to than the moon.

You have to maintain them on station and repair meteorite damage.
Geostationary orbit is a high radiation area and degrades solar panels so the satellites must be replaced regularly.
Station keeping is a hurdle I've never seen dealt with in the literature. Peter Glasser's baseline SPS designs have the area of Manhattan and the mass of a battleship...the broad face must be pointed toward  the sun. This light structure has huge sail area and little mass. What you have is a big, expensive and inefficient solar sail. (Space exploration bonus...hitch a ride to L-5

Then there is the environmental impact statement necessary for beaming microwave radiation into an area the size of the National Mall at orders of magnitude the intensity allowed for human exposure. The idiot Luddites currently frenzy over power lines...a rectenna array will get their knickers in a wad and their lawyers rich  to be sure. Finally one problem with a rectenna array.....the microwaves will interfere with regular WiFi and cell transmissions...not part of the equation in the 60's and 70's when these were proposed.

This does not even look into the wisdom of putting the nation energy infrastructure in one very fragile exposed basket in geostationary orbit. A basket that a few ASAT devices could smite with little trouble.

SPS arrays are not he key to space or energy independence. To the contrary they are most unhelpful and a waste of time, rescources and mental capital.

And I say that as somebody who would move off planet in a heartbeat and considers that only slightly far-fetched....

UPDATE: Space elevators are frequently brought up as a solution to all things spacey. They certainly have potential in theory but there are sufficient hurdles that we should continue development of reusable rocketry. Now everybody's favorite killjoy has a long, informative post explaining why even assuming we get needed breakthroughs in materials, they are not entirely straightforward in their execution.

No source available for  astronekonaut

As regards humans in space, I'm not saying "never". I'm saying "not now."

Not until it really makes sense -- which probably won't be for quite a while (20-50 years), because robot technology is advancing fast and boost technology isn't.

The biggest advantage of robots is that you don't have to bring them home again. The second biggest is that if you lose them on boost it's a problem but not a tragedy. A boost system that is reliable enough for robots is no-where near good enough for people, and right now that level of reliability is the state of the art.

I wonder how I missed that "brief primer" post of yours?

That video of the Delta 2 exploding? Near the end of it there's a closeup of the bottom of the rocket just before the explosion, and the booster nearest the camera isn't burning.

3 Steven:  That's due to staging.  Of the nine strap-ons surrounding the core booster, three leave the pad unlit ("saves" their fuel to get burned higher up).