NASA Pics Over at  A Babe in the Universe is a link to this collection of photos and renderings of various bits of Project Constellation hardware. 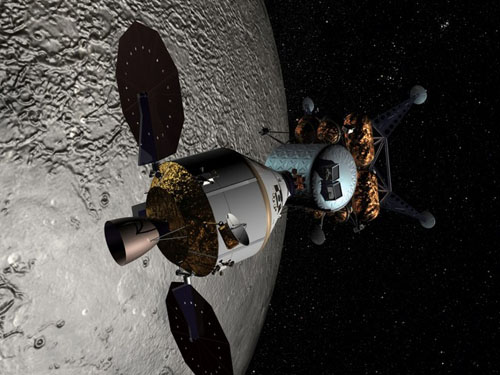 Regolith Mining Contender Clarke Lindsay, links to this post which has video of one the contenders for the Regolith Excavator Challenge.


Simplicity is a virtue that is often forgotten. Space settlements will require very simple, robust systems.

One of the Brickmuppets' crack team of science babes reports that the Carnival of Space is up!

Lots of cool articles but the one that caught my eye was this post over at Colony Worlds.

The post concerns the moon Ganymede and its suitability for colonization. While "A Second Earth" is a bit too strong,  Ganymede does have a lot to recommend it even beyond its magnetic field.

Mars gets a lot of press as far as permanent settlements, but it has radiation issues and the dust problem is rather daunting.

Ganymede has lots of water, possibly way more than Earth, and the moon could likely provide all the volatiles one would need, possibly some nitrogen and certainly oxygen (Ganymede actually has a pure oxygen atmosphere...albeit a very thin one). The gravity is quite low, but comparable to that of Luna so if we can populate Luna with no ill effects then Ganymede will be no problem. This is one of those big Ifs that require some looking into....with actual people....in space....on the moon.

On the down side, there is likely to be very little in the way of any metals at all. Also some rocky patches on the surface would be most useful. This is important because human settlements will generate heat, far more than Ganymede's cryogenic surface  has  encountered. There is the very real possibility that a settlement on Ganymede could weaken its own foundations just through warming and gasifying volatiles.

On the upside we do have some experience in dealing with structures on the ice though the experience in Antarctica points to the need to expect the unexpected. The recently built structures have benefited from all the lessons learned in previous buildings. Here is the new elevated structure that is replacing the old geodesic dome at the south pole....

...it's a cool pic of the Aurora Australis too! (HT Big Dead Place)

A structure on Ganymede or a comparable iceball might look similar, but it would, of course, be airtight. The light, Luna scale gravity would (in theory) assist in construction of larger....fairly non-claustrophobic structures.

Though it's a given that reactors, and most all metal would have to be imported and meticulously recycled, the magnetic field, ready availability of water (and thereby Oxygen) does make Ganymede a good candidate, assuming we can get there...Ganymede is in a pit in astrogation terms in that its in Jupiter's gravity well. Ganymede is also on the outskirts of the Hellish Jovian radiation belt. Note that its magnetic field will help protect surface dwellers, so a permanent human presence is not beyond the realm of possibility. In fact, NASA has worked the numbers, if not on colonization, at least getting there (OK, getting as far as Callisto). Briefly mentioned in this article, NASAs HOPE mission involved a manned mission to Callisto. I blogged about it on my old site here, and  a PDF of some of the spaceship concepts for that program is here. I recently turned up a far more detailed power point presentation of several of the concepts for the Callisto mission.It
is here.

Besides Ganymede there is Titan which, keeping in mind that I'm a complete layman in these matters, might be an even better fit despite its much greater distance.

Titan has hydrocarbon deposits including lakes of liquid methane that could mitigate its probable paucity of metals by allowing production of plastics for construction. Its atmosphere is far thicker than earths providing a good shield from radiation and, even better is a nitrogen atmosphere like earths (it has almost the same proportion of Nitrogen but its 20% gas is methane rather than oxygen). No pressure suits would be required, an EVA on Titan could be done with regular  arctic dry suits! Like Ganymede, it has about the same gravity as the Earths main moon and being an iceball it is likely well stocked with water ice from which one could crack all the oxygen one would need. Saturn is much farther out, but both its Gravity well and Van Allen belts are far more benign than Jupiters. Its thick, but cold atmosphere would facilitate heat exchange and cooling, of machinery, which is a real issue in a near vacuum.

That picture from Huygens could be a photo of some prime real estate!

UPDATE: How could I forget to mention  THIS ?

1 Ganymede, like Antarctica, is a perfectly good chunk of real estate located in exactly the wrong place.  What we need to do is just detach it from Jupiter orbit, and move it in a little closer where it would be useful.

Granted, that's a non-trivial exercise.  But not theoretically impossible.  If we got, say, Ganymede, Mars, Europa, Titan and Venus and jiggered their orbits we could put them all in a Kemplerer rosette sharing Earth's orbit.  Then we'd have tons of room.  Until we run out of room and break them up for construction materials.