Space: Earthlike Worlds, Rocketry, Balloonery and Amusingly Quidnuncish Bureaucrats One of the Brickmuppet's Crack Team of Science Babes takes a moment from

enjoying a lab accident (entirely too much) to bring us news from the final frontier. As she will gleefully tell you, rocketry is all about controlling explosions.

There was quite a buzz recently about the discovery of a rocky planet orbiting Gliese 581. Now it turns out that this discovery has not been independently confirmed. This does not necessarily mean it isn't there, but given that it's the smallest exosolar planet yet discovered, the readings are necessarily very faint and hard to distinguish from background noise. Thus more study is needed. The star system in question is pretty interesting nonetheless with 5 other planets already confirmed, two of which are theoretically on the outer an inner edges of the so-called "life zone" (where water can exist in the open as a liquid). The presence of even two such planets is remarkable as a Red Dwarf has a very narrow habitable zone. The big news with this planet (if, indeed, it does exist) is that it is pretty much in the middle of the life zone. Even if tidally locked, as is likely, some estimates have the surface temperatures ranging from 160 degrees F. on the hot side to - 29 F. on the cold. This is not far above the highest recorded temperature on Earth (136 degrees Fahrenheit ) and well above the lowest so it could be quite hospitable. 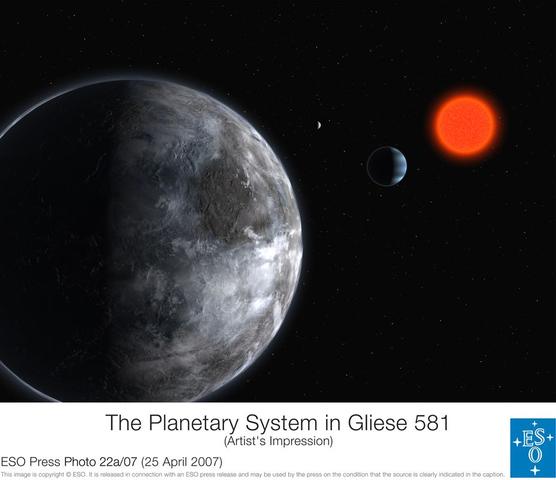 In any event, the discovery of two and possibly three rocky planets in the life zone around a single example of the most common visible type of star vastly increases the likelihood for life bearing planets to exist.

Well we can't. We can't even get to the moon right now except with very tiny probes and 20 light years away is really close in astronomical terms, but its really really far. Light travels 186,282 miles per second. A light year is the distance it travels in a year, so 20 light years is...( carry the 2...) umm...real far. Voyager 1, and Helios 2, the fastest things we've ever launched, would take thousands of years to get there.

We'd need to start now on figuring out how to even determine the trade-offs and design needs to even begin to design a starship and it doesn't look like....oh wait.

It's unclear if this is a design study for a starship with a mission time of a hundred years, or a design study aimed at seeing how we might go about building one a century from now. Still, it's nice to know that some thought is being given to these issues even if we can't afford to spend large ammounts of money on them now.

The above link also mentions new efforts being put into cheap access to orbit, including microwave beam propulsion.

In the nearer term, though not quite getting to orbit, Virgin Galactics suborbital tourist spaceship Enterprise recently made its first free flight and launch from its booster plane. Here is the video.

In other commercial space news. Armadillo aerospace has been doing a lot of tests with their Vertical Takeoff Vertical Landing test beds to gain an understanding of how  to control such a vehicle. They've also been competing for the NASA Lunar Lander Challenge and doing various other things with rockets.

Their experiments are less polished but similar to the DC-X program of 20 years ago and they are working ultimately towards the same goal, a VTVL reusable spacecraft of 1 or two stages. However they are getting a good deal more experience with controlling such systems than that program did before it was cut short.

On an even smaller budget  and not quite into what the law defines as outer space space,  a father/ son team from Brooklyn nevertheless has achieved transcendental coolness by sending their iPhone to 100,000 feet and getting pictures of the curvature of the Earth.

Finally, at the opposite end of the social spectrum from the dynamic father son team of space balloonists,  we must take a moment and ponder the sheer silly asshattery of the UN and bureaucrats in general. You see, the UN is now poised to make it a crime to block out the sun. While this may at first blush seem  reasonable if a tad redundant decision, this is in fact potentially troublesome. While we here at BB think the Global warming issue is more than a bit over-hyped,  if the worst case scenarios were to come to pass a sunshade would be a very effective way of dealing with the problem and unlike other, kind of scary, geoengineering schemes, would be quickly reversible if it caused excessive unforeseen consequences. This is the cleanest, least disruptive short term solution to the problem these very people have a monomaniacal focus on, however...

[ quote ] ...But others, such as the ETC group, an environmental and social advocacy group, fear simply blocking the sun is a bandage, meant to cover up the problem, and allow humans to continue using fossils fuels... [/ quote ]

...in other words it could solve the problem they claim to see as a transcendental threat, but does not provide the solution in the way they want (which  tends to involve a lot of misery for us and making their buddies rich through carbon trading). Nothing would seem to be a better demonstration that the people hyping this problem do NOT believe it is a transcendental threat...which is actually NOT to say definitively that it is not...just that either way, these particular people are either liars or idiots.

Note that depending on how it is worded, such a ban could have deleterious effects on Space Based Solar arrays, which, while completely unworkable now, could be a very environmentally favorable solution to power problems in subtropical to tropical areas and cislunar manufacturing and settlement  if launch costs were to drop ( well...drop a whole HELL of a lot).

Finally, a reminder. The Space Shuttle Discovery is scheduled to launch to the ISS on November 1, at about 16:40 EST. This will be one of the very last opportunities to see one of these.

Science Babe is Nice Holystone from Baccano! Because "expwosives is all about kemistwy" and chemistry is SCIENCE!