What could we buy for 6 NSC's? Comparison shoping... 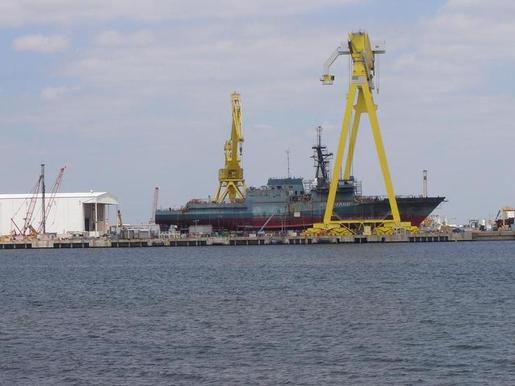 The second of the Legend class, USCGC WAESCHE WMEC 751 is nearing completion and is naturally under considerable scrutiny regards quality control and design issues learned in BERTHOLF.

The Fiasco that has been the National Security Cutter program has led to some laypeople to propose putting a fork in it.

The response of course is that the ships are still needed, restarting the program would be expensive and would not take into account the hull specific lessons learned with the lead vessel.

If all lessons are learned and this ship is completed without the issues of its predecessor then the Coast Guard will have a very fine ship indeed. EVERYTHING I have hard about these vessels design is that they embody every thing that cuttermen have been asking for for 30 years.

Of course it is expensive, the best costs a lot.

The best can also be the enemy of the good.

These high endurance cutters, if they don't have any cost overruns will cost over 450 million dollars apiece....for offshore patrol vessels.

I recently blundered onto this PDF, which is concerned with the state of the Australian shipbuilding industry. This is interesting because at the bottom there is a list of most of the ships built in Australia in the last few years...and their costs....in US Dollars!

Australia has been building a lot of well regarded low end naval vessels for various countries....lets see what those countries are paying and what they get.

New Zealand has ordered a series of offshore patrol vessels from the Australian firm of Tenix.
These are actually designed by the Finnish firm of Aker which designed the Healy as well as the new Mackinaw. They are ice strengthened and designed to serve in the horrific conditions of the southern ocean, which is broadly comparable to the Bering Sea in sheer nastiness. A good overview of them is here.

They are slower than the WMEC 750's and they are certainly inferior in some respects, but they cost 45 million. The WMEC 750's cost 450+million (and the Bertholf is breaking 600 mil)..thus being generous and going with the promised rather than demonstrated cost one comes up with.....
10 of these for one NSC...or 60 of these vessels for the cost of the remaining 6 Legends.

The finest ship in the world can only be one place at a time...as the Russians like to say, quantity has a quality all its own.

Going down the scale we find another Tenix design. This time for the Philippine Coast Guard, the  56m San Juan class  provides broadly similar capabilities to the Coast Guards 210' Reliance class. They are slightly smaller, have about half the crew and 6 knots faster. A company brochure on them is here and there is an industry analysis of their construction here. 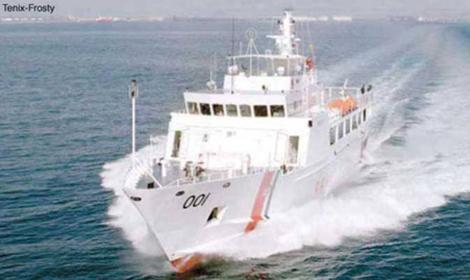 They are fitted for (but not with) a 25-35mm auto-cannon on the foredeck (a strong point and provision for a magazine are provided) and carry such gold plated items as a decompression chamber for diver mishaps and a rescue/triage compartment for 300 people! At 25 knots they are slower than the USCG would like but unlike the Otago class mentioned above they are developed from a fast attack craft, thus their hulls are likely more amenable to high speed with uprated engines. Of course the Phillipine CG chose these engines for their outstanding fuel efficiency...something that is likely to become more pressing than 3-4 knots speed. No helicopter hangar but they have a pad and at any rate at 183 feet long are close to the USCGs high end patrol boats, of the Cyclone class. (The CG is short of patrol boats btw.)
The low balled cost of one WHEC750 would buy 23 of these vessels. All 6 would provide us with 138 patrol boats...with helicopter decks.

This SAR vessel is the break point between the medium endurance cutter and patrol boat. The Australian firm of Austal, which is involved in the LCS contract provides the Royal Australian Navy with a similarly sized patrol boat, the Armidale class. These vessels have no helicopter deck but have a 30mm gun two large rescue/inspection craft, a speed of 26 knots and are designed for patrol in the hellish southern ocean as well as SAR ops in the teeth of Willie Willies. They are very seaworthy for their size and are reportedly highly regarded. 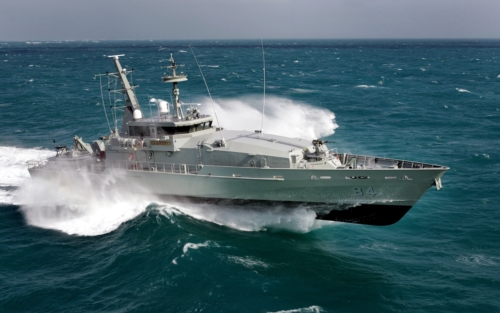 Golly willakers....
Tenix makes a broadly similar steel hulled, ice strengthened  vessel for the Kiwis that is a bit more expensive at 20million a pop.

Due to the size restrictions of many small boat stations, the Coast Guard prefers its patrol boats to be somewhat smaller than this, which is one reason we didn't simply build more of the successful WPC179's. 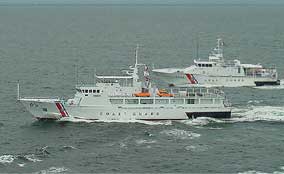 Vessel....The 35 Meter patrol boat is very much more in line with USCG ideas on patrol boats....seen here behind one of her larger half sisters.
30 kts, a 30mm gun and a rescuee/triage area (not included in the PDF) . At 8 million dollars apiece thats 56 per NSC and for the program...336

OK this is getting silly...pier space alone is an issue not to mention 6720 cuttermen if the vessels have a realistic crew of 20 in CG service.

There are lots of designs from around the world including, I'm sure the US, I just found numbers for the Aussie designs.

In an operational area as big as that of the USCG some large cutters are certainly necessary, and a far larger number of small patrol boats is desirable. Also the NSC program is not the alpha and omega of USCG budget.

The point of this above the paygrade rant is to suggest that we could spend the money better than on 8 ships, we plan to run ragged. This is true however fine the ships in question may be.

We could buy scads of cruising and inshore patrol cutters and use the money saved to buy a few icebreakers which we have to buy anyway, or even airships.....which are certainly cool , but I don't have any cost info.

There are many things that the linked PDF does not cover, including life cycle costs, such as fuel consumption and manning. As stated previously...contractor quality control issues notwithstanding,  the Legend Class is a very impressive design. The purpose of the post is not to bash that design, but rather to ask if that capability is worth the reduction in unit numbers it inevitably entails.

Welcome readers of Unofficial Coast Guard Blog and Information Dissemination . This blog has no format and generally deals with fluff, but, if this interests you, then  you might peruse the category list, particularly weapons n' kit and Maritime Matters ....Thanks for stopping by!

1 Great discussion! SO which of these arleady designed/built boats should get the FRC-B award?

2 Another thought if the Armidales are to be built in US Austal has a shipyard to do them in!

Aker, Austal and Tenix all have arrangements with certain  US shipyards. These could be domestically produced with little problem.

4  The 35 meter Tenix patrol boats are in service with the PCG and not the USCG ,  there are a total of 4 vessels and another 4 of the larger 56 meter SARV ...