CGX has been in the pipe for some time, but this article mentions a much larger vessel also being contemplated.
The other new cruiser would be a much larger, 25,000-ton nuclear-powered ship with a more conventional flared bow, optimized for the ballistic missile defense (BMD) mission.

This is certainly interesting and there is more on it here.

25,000 tons is in the ballpark of the size of most historical dreadnoughts. This is a BIG ship if built.

Here is an accurate representation of what such a ship will almost certainly not look like.

This seems at first blush like good news but a total of 19 ships (14 of the CGX and 5 of these very large ships) is not going to replace 27 no matter how capable ones ship is. The finest ship in the world is no good if it is not present and cutting the numbers of ships reduces both the chances that a US vessel will be present, and makes it less possible to make good losses.

While the size of the vessels in question should not have a great bearing on costs (steel is cheap compared to the electronics that make up most of the cost of warships today) adding nuclear power will, in all probability, cause costs to cascade exponentially.

With only 5 contemplated, their utility will be limited and it might be better to build more similarly sized conventionally powered ships.

Of course the flip side of this is that the Navy does need to cut its dependence on oil and this program may be a way to jump start that transition.

The propulsion plant contemplated seems to be a semi off-the shelf "half carrier" plant which makes sense but is disappointing.

Now USN nuclear plants have had amongst the best safety records in the world since the late 1950s, but if they are going to spend this much money (and  nuclear ships are hella-expensive) then they might as well go with a newer reactor design like the naval thorium reactor proposed here. This could potentially be a boon for both civilian and naval affairs if very safe compact reactors were developed from this. Of course boondogalage is rampant in government financed programs so I'd suggest they simply offer a prize for a satisfactory design.

That is unlikely to happen and there are other concerns as well.

The Democratic congress which is generally not a fan of defense spending of any sort, lukewarm at best to nuclear power, and vehemently opposed to Ballistic Missile Defense...is now pressuring the Navy to build a nuclear powered ballistic missile defense ship....Oh and they are going to reccomend canceling the improved naval Anti Ballistic missile  missile while they are at it...

They also say the analysis will recommend dropping the Kinetic Energy Interceptor (KEI) from the CG(X) program.

The KEI is a large ballistic missile-defense rocket under development by Northrop Grumman as a ground- or sea-based weapon to intercept ballistic missiles in their boost, ascent and midcourse flight phases. The KEI is much larger than the SM-3 Standard missile developed by Raytheon to arm Navy cruisers and destroyers for the BMD role. The 40-inch diameter KEI is nearly 39 feet long, while the 21-inch diameter SM-3 stands just over 21 feet tall. Both missiles use a kinetic energy warhead, intended to ram an enemy missile. Sources said a missile launch tube for a KEI would need to be so large it would take the place of six SM-3 launch cells.
This seems like blinkered logic to me.The Evolved SeaSparrow Missile can be quadpacked into a standard vertical launch cell...see... 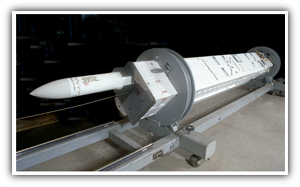 ....so there seems to be little reason that six regular sized cells (or their analogues) could not be substituted for one of these KEI missiles if greater combat persistence against non-ballistic or super high flying targets were required.  (The big tube might be adaptable for a big bombardment rocket as well). This cuts the future missile defense capability and puts most of the missile defense eggs into a very expensive 5-ship basket that seems prone to the sort of cost overruns and cancellations that have plagued US naval procurement of late.. So one can be forgiven for looking this gift horse in the mouth.

Anyway, I'm a big fan of nuclear power, I want the navy to have good ships, and ship size is not in and of itself a major cost driver and has tremendous advantages in survivability, effectiveness, and availability (read seakeeping). However I'm not convinced...especially given the issues facing the similar but theoretically less ambitious DDX program ...that this proposal is terribly well thought out....It certainly has potential but  needs a bit of scrutiny.
Update:
For those unclear on the concept of "cruisers" all is explained at this excellent site that discusses cruisers in general and gives a very good overview of what cruisers are and arent. It also has some very interesting bits on two cancelled projects from the late 80's early 90s.

For those interested in maritime applications for and challenges to atomic power check out this long and comprehensive report.
Thanks to Dr. Crouch for making it public and Kirk Sorensen for pointing it out.

Full Disclosure: this whole post is waaay beyond my paygrade.

LCS and Its Progeny  EagleSpeak links to this sobering take on the current woes with the Littoral Combat Ship.

The cost overruns of the LCS eat at the raison dâ€™Ãªtre of the whole program, a light cheap fast (expendable) combatant. Note though that the LCS is still vastly cheaper than  it's big brother, the  DD1000.

The DD 1000 is the size of a small Battleship* and cost about as much as a BB would. Yet these vessels are being pitched as destroyers, and their vapourware half sisters, the CG21,are to replace the DDs and CGs in the escort role....apparently by replacing the big guns with missile tubes and adding a better air defense system...which promises to push the cost up even higher.

The LCS is cheap for a destroyer, but has the armament of an OPV. It has all sorts of potential for improvement by adding various  modules, but none of these give it any area defense capability, or any capability for surface combat beyond the 30 click range of the as yet non-operational NLOS missiles. With their big flex deck, impressive helicopter capability and good seakeeping  they might make useful auxiliaries but they are an insanely expensive solution to all the problems they are intended to tackle and little more than toothless coffins for their crews in a hot war.

In response to this, as I pointed out on the old blog in April, there is an upgraded design being offered by General Dynamics see here , here and here.

One would assume that similar options would be available for the currently defunct LockMart design. One would be right.

For fire support use ATACMS fired from VLS tubes, and develop the POLAR missile...a ship based derivative of the off the shelf MLRS system that the Navy rejected in the 90s. (but give it the unitary warhead of the current GMLRS). Buy something in the class of these 2 designs as replacements. Get ferocious about cost discipline. Buy as many of them as possible.Most importantly, buy enough modules, particularly ASW modules, that the ships really are multi mission. Numbers are what the navy needs...but it needs numbers of vessels that can take care of themselves. This strikes me as a far better compromise than the high-low mix as the low end vessels tempt the congresscritters to count them as full on units.

*The USNs first Dreadnoughts, the South Carolina and Michigan were 16,000 tons.

Scarecrows of the Navy? Over at Warships 1, someone in this thread noticed something odd on the foredeck of the USS Elrod. 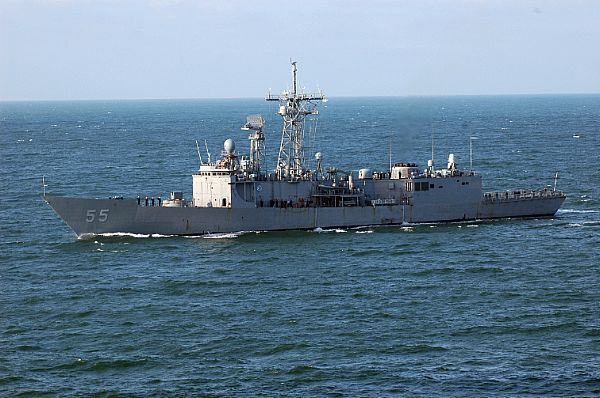 It looks like (and the consensus of opinion seems to be that it is)  a fake gun mount intended to deter  maritime brigands.

While the Perrys have lost virtually ALL of their hot war punch with the removal of the MK 13 missile launchers, they still possess both a MK 75 76mm gun and an improved Phalanx upgraded to improve its effectiveness against surface targets. The ship is quite capable of dealing with pirates and such...of course neither the phalanx nor the 3inch gun look particularly fierce to an untrained eye, and at any rate the ship seems to have no weapons bearing forward aside from small arms and, perhaps .50 caliber weapons on the bridge wings.
So what IS this thing, a dummy gun to deter attackers, or an actual weapon like a 25-30mm cannon?

It certainly looks fake.
(Note: At time of posting there is a much better high res picture in the linked thread...)

As an aside, the USCG's 378' High endurance cutters now have the same fixed armament and have it better positioned, comparable range and speed, twin screws, better maneuverability and a shallower draft....and despite being twice as old with old and hard to maintain equipment, require a crew of 168 vs 300 . The Perrys certainly have better EW equipment, 2 vice 1 helicopters and their ASW tubes are still fitted, but it is hard to avoid thinking that the Coast Guard, with something similar to the 378's would be better (and more economical) to use on antipiracy duties.

Of course....we'd need to not have our new-builds be lemons first.

Perhaps we should just build more of the 'white needles of death' with updated systems (you know...systems still in production).


Anyway, does anyone have any contradictory ideas on the "dummy gun"?