Its a Blimp! COOL! The Coast Guard and Navy are leasing a British airship for patrol duties in the Caribbean.

Brickmuppet Blog previously engaged in an above the paygrade rant upon this very topic here.

This is a cool idea that has been toyed with before....  An overview of a notational design (from 1980) for a Patrol Airship for the USCG is here. ( 330 page PDF...not dial-up friendly!)

Info on the versatile and popular Skyship 600 can be found here and here.

The vessel will have  a lot of advantages over  helicopters in endurance and economy, and an  advantage  in  "mast height" and visible horizon over a  cutter  as its sensors can be carried  very high up. 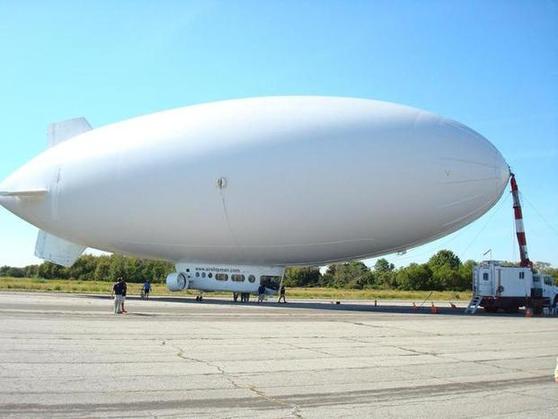 One odd bit of info, possibly a criticism, jumps out at me.
Although the ship has an endurance of 52 hours, patrols will be limited to 8 to reduce crew fatigue. Given the size of the gondola in relation to the 3 person crew,  it seems like little effort to install a few bunks. There may be concern regards providing enough privacy for a mixed gender crew, but if this is the case then it is a great reduction in capabilities for utterly PC reasons. There is no reason that single gender crews couldn't be flown, perhaps an all male and all female crew in a blue and gold (blue and pink?) arrangement.

(Of course, it is quite possible that my knee is just jerking and that there are other issues  that a junior enlisted Marine Science Tech on convalescent leave is simply not privy to.  )

On the plus side, the ship is ridiculously fuel efficient, is faster than any cutter (or destroyer) and has far longer range and endurance that a helicopter,  even with the 8 hour time limit.

This is in my humble opinion a stellar idea.

Who'd have thought that standards and  practices was actually ahead of the curve in all the '80 cartoons redubbed so that the armor consisted entirely of "Robot Tanks".

New US Infantry Cartridges?
Anthony G Williams has the scoop on his forum.

I've just spent some time talking to people on the AAI stand at Eurosatory. They are very interested in developing an intermediate calibre version of the LSAT LMG (c. 6.5mm), and a carbine using the same ammo. If they can meet requirements, the caseless version will prevail (the ammo is much more compact as well as lighter), but if that meets insuperable problems then the plastic-cased telescoped version will be used (that's already been through a successful testing regime). Earliest in-service date is 2014.

The latest on the US future rifle ammo experiments is here.
An accurate representation of what the caseless carbine will not look like is here:

Caseless is actually nothing new....muzzle-loading, black powder weapons are, in fact, caseless. One of the big advances in firearms development was cased ammo, which made repeating rifles practical.

Now the US Army is looking to either get rid of the case altogether or use a polymer case with the bullet telescoped into the round for compactness. Either of these will save considerable weight when multiplied by the number of rounds an infantryman must carry.

The caseless option is a tremendous advance in this area, but it is a challenging prospect. The US, France, Germany, and possibly Russia tried to do something like this for decades with no success. The only successful modern caseless rifles thus far are the now discontinued Heckler & Koch G-11 which served briefly with German Special Forces and actually worked, but was discontinued for mainly financial reasons (oddball, completely nonstandard ammo  for one thing)... 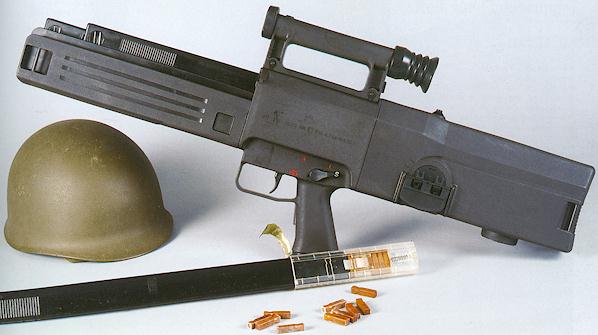 ...and the rare but extremely neat Voere 5.56 and 6mm bolt action caseless rifles that use electric ignition. The main drawback to the Voere weapon is getting ammo from Austria and the fact that handloading is not really possible.

The polymer cased option is a good fall back and has been pretty much perfected already....

The fact that (from the above quote) they seem to be using this as an opportunity  to upgrade to a general purpose round (they are talking about a 6.5mm round.) is welcome news...albiet late in coming. While the .223 round in current use is not nearly as bad as some say (It is killing terrorists quite effectively) it is quite sub optimal and lacks range.    Nearly a century after  US Army ordinance people determined the ideal characteristics (and developed the .276 Pedersen) and 60 years after the Brits came to exactly the same conclusion...they might finally get an intermediate round with about the same  performance that soldiers have been asking for all along.

More on the optimum infantry rifle caliber  here and here.

1 So the fans of 6.8 Rem SPC are going to get shafted. I find it hilarious. I guess rubble rousing at forums does not select a cartridge even if elects a president.

2 The bullet diameter is no surprise.  The best ballistic coefficients are found around the 6.5 to 7mm range.

Caseless ammunition has been a long time coming.  One advantage of brass & steel cased ammunition is that the case carries much of the heat out of the gun.  With caseless technology, the heat goes into the chamber walls.  This is fine for muzzle loaders, where a skilled operator might get two, maybe 3 shots per minute.  At 600 shots per minute,heat is a real problem.  Other issues include extracting unfired rounds, storage life of cartridges, etc. all present significant issues for caseless cartridges to surmount.  Still, it is possible.  The G11 was almost adopted.  The next one might very well make it.