Info on the new Swedish PDW

Via a thread on Anthony Williams site comes this interesting web-page devoted to the CJB MS, a Personal Defense Weapon concept built around a new 6.5 mm cartridge. 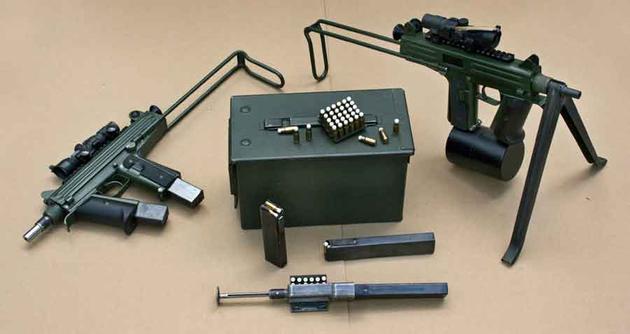 This round, the 6.5 CJB,  is not in the league of the well regarded 6.5mm Grendel....it is a necked down 9mm parabellum that fires a discarding sabot round. The round, less sabot, is 4mm in caliber which does not tend to impress...especially given the issues that have been reported with the 5.56 NATO round.

The penetrator however, is made of tungsten and is quite long, giving very good sectional density. It also travels very fast (2723fps from a 7.9 inch barrel!)

More on this weapon here at Security Arms where it is mentioned that the new round generates around the same level of firing impulse as an average 9mm round making the barrels swap option practical. (this display actually has a 9mm barrel mounted on the weapon! ) For some years this site had been all I'd been able to find about the CJB MS.

This weapon reportedly has better penetrating power than the 5.7mm FN and 4.6mm H&K. It is also CLAIMED to have an effective range of 400 yards (if so, this is a truly impressive round to be fired from a 9mm sized weapon).

Ballistic gelatin pics are halfway down this page and they do look impressive, though there is little data on, say, the MV or barrel length of the weapons that fired the respective rounds. I imagine this round will better than the 5.7 but might still have some stopping power issues. Nevertheless, the ease of modifying 9mm weapons to fire it and the ability to fire common as dirt 9mm ammo in the CBJ MS with a simple barrel swap* would seem to male this a really interesting military weapon with a lot of potential.

I wonder if "spoon-tip" ammo is Geneva legal?

The gun can accept a 100 round drum which seems unrelated to any of the high-cap mags on the market today. It will be interesting to see if it is reliable.It is very compact when mounted but the feed extension is likely to make storage in an ammo pouch awkward. Still, 100 rounds is good to have for suppression.

Keeping in mind that my tactical experience consists of crawling through a mock freighter twice....er....and hundreds of hours of playing first person shooters, I'd say make the foregrip collapsible so it could be holstered. This would be very close to what the Army and Marines need in a PDW. It could be carried by second line troops on the hip, keeping both hands free for their primary duties. This also makes it less likely that their gun will be in the hummer when they need it.

With its collapsible stock and the addition of a collapsible foregrip it would seem to me to be easier to aim and use than a pistol.  As stated most 9mm pistols can be converted to fire this round so you have a common ammo for better logistics. The UZI style magazine in grip takes advantage of the "hand finds hand" principal for quick reloading and makes the weapon shorter too. I like the self cleaning action of the sabot, that's cute!

One final note. A splash of cold water seems in order given the very boosterish nature of the above linked website. This weapon and the round in particular, does seem to have considerable potential, but it is not a wonder weapon. All weapons are compromises and 4mm projectiles, even very long ones, should serve to give one pause at a time that 5.56 rounds are generating doubt. This weapon may well fill a crucial niche and it is certainly very interesting.  At the same time it is important to remember how overhyped the 5.7 FN was.

Still, I think it bears testing at the very least.

1 Why are there two magazines? Is that really the case? How can it feed from both?

2 Yes, there are 2 magazines but only the one in the pistol grip feeds. The one in the foregrip is just conveniently located for quick magazine changes (drop the mag and grab the one from the foregrip in one quick ~4 inch motion motion).

Interestingly, at least one of the SPIW ideas had 2 magazines. The idea was to allow a tactical reload.  As one emptied the other could be replaced at the first opportunity. (Most modern rifles don't allow the mag to be topped off while in the rifle.) This didn't pan out because of weight, complexity, bulk or AB&C.