The Utility of Airships in Defense and SAR Operations

One of the challenges facing the USCG is replacing the medium endurance cutters. The Reliance class are decent ships that have served well beyond their anticipated life, but...they are thus quite old are slow, bad rollers and spares for their engines must be obtained from South Africa, or hand made here. The Bear class are only about 10 years younger, are bad rollers and slow, (though they are robust vessels still in good condition) that both classes have given such good service is, at this point, a testament to their crews rather than their design.

Replacing these is a daunting and expensive prospect, as is manning them. The new offshore patrol cutter currently under development has a crew of 91 plus an air group. Note that given the issues with the new high endurance cutters, the USCG may be going back to the drawing board with these vessels.

Ideally a medium endurance cutter should have a helicopter for fast transit to a SAR search area and to extend the ships horizon. It should be fast, have good endurance and excellent sensors. It should have a large capacity for rescuees. Aside from the last requirement, these criteria can be met by this  old design. It is a 330 page pdf file of a 1980 study on airships by the USCG using the technology of the day.

In the late '80s the Coast Guard rented a Skyship from the UK for tests and it was considered quite succsessful. In the early 90s an improved version, the Sentinel 1000, was being tested for the Navy and Coast Guard, but it was destroyed when the airship hangar in Weeksville NC burned, ending the program.

An airship has several advantages, it has far greater endurance than a helicopter, it is almost as fast, ( 60-90kts depending on the design) it can carry a large surveillance radar, it can hover longer...( for days if needed) compared to a patrol boat or WMEC it is at least twice as fast. Airships actually can deal with storms fairly well, (the USNs K-class airships served in the north Atlantic, some of the worst weather on the planet, yet they only lost one...which was destroyed by gunfire from a U-boat).

Today there are several designs to choose from, the old Zeppelin company is back in the rigid airship business with their innovative Zeppelin NT design, that uses steerable thrust to lower ground crew to 3! 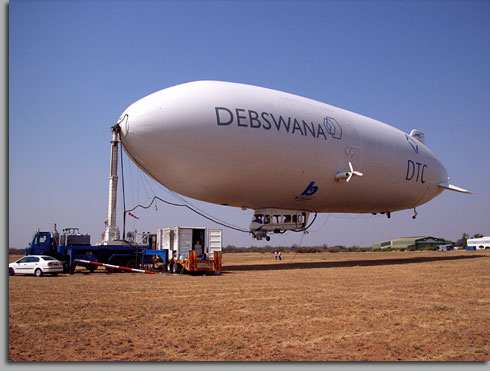 Skycat of the UK is offering an amphibious lifting body design specifically geared to costal patrol and surveillance, perhaps inspired by the recent US Army tests with another UK design, the Lightship. Heck, even Blackwater security is getting into the airship business! Thus this is NOT unproven technology.

Given that it can't carry hundreds of rescuees, is not going to break ice and is not going to carry buoys, it is not a replacement for all surface vessels, but for polar science research, general law enforcement , search and rescue, ice patrol and surveillance, these craft have awesome potential as force multipliers. It has the reach, horizon and very nearly the speed of a helicopter operated from a medium endurance cutter, with far more time on scene and the crew and fuel expenses of a patrol boat!

For Naval applications AEW and ASW airships have already proved their worth. Regards ASW in particular a larger design might well fill a niche that seems to have atrophied somewhat in the USN. The Army is already looking into them for surveillance and communications relays and Army and humanitarian organizations might find them useful for mine clearance in postwar theaters, especially if they're fitted with ground penetrating radar or other advanced sensors...

But as a coastie, my primary interest is as a cost effective asset to the Coast Guard, and I really think something of this type is an excellent and cost effective means of increasing reach and reducing response time at a limited cost.