Well...You Have a Nice Weekend too China Yesterday, China interupted America's hand-wringing over the Obamacare debacle with a bit of a nonsequiter.

It seems that they just, out of the blue, felt the need to remind us that their small fleet of ballistic missile submarines can wreak all sorts of nuclear devastation on US cities.

This is not news...so why bring it up? 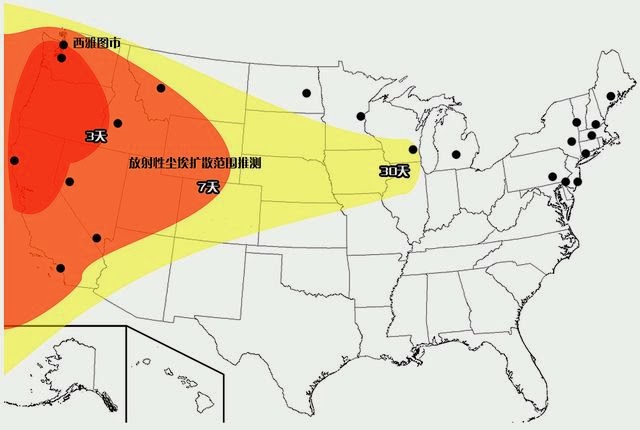 Also: Why are they wasting a nuke on Rutland Vermont?

The Blaze suggests that this might be welcome news, indicating a loosening on secrecy and censorship, but this flies in the face of recent trends which have been even farther in the other direction.

We mentioned back in August that FAS had gotten wind of China doing  a lot of nuclear attack simulations and had been putting together their own.

Hot on the heels of this helpful reminder...Today we had China announce that they intend to "silence" the Dali Lama. This is part of a larger internal crackdown fully in keeping with the disturbingly Maoist tendencies of Xi Jinpang.

Nuking the people who owe you money and buy your stuff is a poor business model (as wise people have pointed out) but if it looks like said people (the US) is never going to pay you back and are going completely broke it becomes less so...especially if the perceived deadbeat is the only thing standing in the way of regional hegemony.

Furthermore, if one thinks Mao was a swell guy and his attitude towards human life is laudable, then the huge population of China and the individual low yields of most of the warheads in the US arsenal might make it appear that China could "take the hit" of a US retaliatory strike.

In the long run...which is how China looks at things... they might even be right.

This still seems unlikely. No one "wins" a nuclear exchange.

However, stupider decisions have been made. The decisions that led to World War One all seemed like good ideas at the time. It's also important to remember that other societies and values systems can produce decisionary calculus with regard to acceptable trade offs is likely far different from ours.

On an equally upbeat and somewhat related note: There is an interesting report here on dealing with a low yield nuclear blast (about 1/2 a Fat Man) in a nuclear terrorist attack.

1 Re: Rutland, Vermont, I'm pretty sure that they're threatening US politicians' hometowns and/or properties. For example, trying to show Chicago as threatened. Typical thug crap. I dunno, maybe they're threatening Ron Paul, but I suppose they could be threatening Valerie Jarrett's second cousin's boyfriend (for all I know).

To be fair, I wouldn't want to be subtle with Obama and his crew because they might not get it.

2 Usually, when North Korea does this crap, it means that the harvest was no good, so they want to keep their own people occupied and foreigners away from being able to observe. I wonder if China had an agricultural shortfall this year?

3 Not that I actually know anything about this stuff, so don't believe me. These are just suspicious guesses and paranoid ideas.

4 The 2013 Chinese rice crop wasn't so great, thanks to the heat wave this summer; and there's been a fair amount of publicity about Chinese rice from Southern China being mostly full of cadmium from industrial pollution. Other regions have a lot of arsenic and other heavy metal pollutants. A big report on China's pollution problem was done, and then the state decided it was so bad that it had to be classified; and even People's Daily was enraged about it.

There's also been a huge wave of killer hornet sting deaths, and that Tiananmen Square Muslim thing, and possibly Chinese people being reminded/finding out about Tank Man because of the new Square incident.

Mandate of Heaven, anybody? Or at least, the regime deciding a distraction is needed from the internal problems?

5 Wow.
I did not know that about the rice crop.

Although he doubled his rice planting area this year to 13.3 hectares, Sun estimated that his farm's output will be 15 to 20 percent lower.[/quote]

15 to 20 percent....and that's a guy who doubled his crop...this is going to be a long winter for the middle kingdom.

6 Well, they've been buying a lot of rice from Thailand in recent years. But I don't think Thai rice can feed China.

On the bright side, they don't have to live off of just rice these days. China grows a buttload of corn now, for example; even if the drought brought that down somewhat, they planted record amounts of corn this year so they must have gotten something.And they've got a fair amount of money saved up that they can spend on food imports.

(I have a very bad memory of eating authentic Chinese creamed corn at a Chinese-student-patronized Chinese restaurant while visiting Ann Arbor. They had added some kind of weird flavor to it, like plum, and my stomach was Not Expecting It. I can eat just about anything new, but apparently I want familiar-looking things to taste like what I'm expecting. OTOH, I did get some awesome books at the Dawn Treader bookstore that day, so perhaps weird creamed corn is sent to try us.)

7 China's buying up scads of land in Africa to feed themselves with. It's causing....issues.

8 I'm sure they're also miffed about the Zumwalt, though. The Chinese love them their navy, they've been happily assuming that the US is going to let them play with no opposition but the JSDF, and now we've brought out a newer, cooler, stealthier ship that's eminently suited to playing with the Chinese.

So there's that. I mean, that new JSDF ship made the Chinese throw a hissy, all by itself.

9 Interesting that Annapolis and Norfolk are on that list, but not Chicago or Houston or Atlanta (I will neglect to mention Detroit on the grounds that dropping a nuke might be considered an improvement!)

Definitely a list compiled by a navy without consulting other departments...

10 Well, that navy bias _would_ explain why Wright-Patt is strangely untargeted. I mean, that hurts. We've always been first strike targets!

11 "We" meaning Dayton and surrounding areas.

12 Obviously the Chinese think that Dayton's harmless now that NCR has moved out.

13 Maybe we need a movie where the buried codebreaking machines turn into mecha and lurch through the nighttime streets, terrifying the students at UD (except the ones too drunk to notice). Because that would totally happen if this were anime Japan.

There are two spots for the Portland area, and I'm not sure what the eastern one is targeting. The airport, maybe? (There's an Air National Guard unit based there, but that seems pretty small potatoes for a nuke target.)

It looks like it's shooting at Gresham, but there isn't anything in Gresham.

I would assume that all of the 50 largest metro areas would be targeted, which is why Portland is on the list. The metro area is very spread out, and maybe the second nuke is just to catch areas outside the flash zone of the first one. But in that case, there ought to be a third one, aimed at Hillsboro to get Beaverton and Forest Grove.

15  I wonder if they're trying to take out I-405? The leftmost bomb is aimed at downtown Portland and it would bag a big stretch of I-5, but I-405 veers off well to the east and bypasses Portland entirely. If they're trying to partition the Interstate Highway System (a possibility) they'd need to hit I-405 as well.

16 Where do you see Portland ?
OH The animated .gif!

No the .gif is an old animation of likely SOVIET Targets during the cold war. The color picture is what the Chinese papers went with. Its a fallout map with targets and it just seems odd to me.

17 I'd like to point out that in the old Soviet attack .gif, Duckford is a listed target... we're the triangle at the top of Illinois.

18 The scary thing about these types of documents is that it makes you realize that these people, who have nuclear weapons and are responsible for their use, have very little idea what the hell they are doing.

Actually, that's an interesting question of military history. I wonder if we've done any analyses of our own Cold War-era strike targeting priority lists versus the historical presence or absence of strategic targets? I mean, we're making fun of the Chinese here sorta, but did we actually do a better job?