So Would This be a BBG? Huntington Ingalls is offering a development of their  San Antonio Class LPD this time for Ballistic Missile Defense.

The LPD (Landing Platform Dock) 17 class are very large and complex ships. Early units were plagued by troubles, however, most of those revolved around the complex mechanisms associated with its flood-able drydock. There were other issues too but most of the rest were due to either workmanship issues (Post Katrina) or larger problems with Navy oversight.

However, the hull itself is built to full military specifications and, after over a decade of tweaking has had all the bugs worked out.

So: there is this large, perfectly serviceable, already designed hull with VAST amounts of volume available (if one removes the well dock, marines and tanks) and it is designed for survivability.

We need ships to replace the Ticonderoga class cruisers which are at the end of their lives. Any such replacement is going to need a much bigger radar system than the Aegis to retain full Anti Ballistic Missile capability into the future.

Ingalls has responded by taking the off the shelf LPD-17 hull and removing the extensive cargo and troop handling facilities as well as the damage control nightmare that is the drydock. Thus the ship is made structurally simpler and probably much tougher.  They then slapped a big AMDR radar, 288 mk 57missile tubes, a hangar and flight deck for V-22s some 57mm cannons and a notational railgun mount. 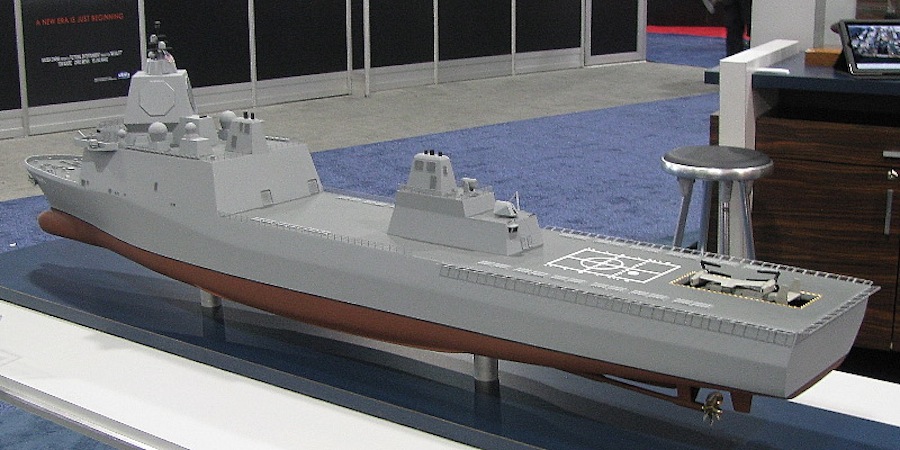 I'd think moving the hangar spaces above deck  athwart the funnels would be better than to rely on a single elevator. But I'm paranoid that way.


The railgun mount is interesting. It doesn't look like a railgun and the gunhouse looks rather bigger than the 8" MK 71 or the 155mm AGS.  In other words they have kept some interesting artillery options open to them.

The Navy, however, has started focusing on developing ships that could carry out multiple missions rather than singular mission vessels, a notion it promotes with the Littoral Combat Ships, which are designed to carry swappable missions packages for surface warfare, anti-submarine warfare and mine countermeasures.

"We have to get away from building single missions ships,â€ Vice Adm. Tom Copeman, the commander of Naval Surface Forces and Pacific Fleet, told an audience at SNA.

This criticism seems blinkered. And not just in it's use of the term LCS as something other than a punch line or an epithet.

The hangar, the 57s  and the big arse gun show this to be a multipurpose vessel. Railguns and helicopters do not contribute to BDM. Additionally, the large "empty" space amidships that in LPD 17 is used for vehicle ramps would seem to lend itself to something of the sort of C-4I facilities that the Navy only has on  the two remaining (quite elderly) command ships. This last is entirely speculative, but some sort of expanded flagship facilities are sorely needed in the USN. (**but see update)

The big question mark is speed. No speed is given for the above ship though most other offerings in the family move at 20-24 kts.  The USN considers about 30 to be frontline*. Note that speed/power curves go up fast around 24 knots. While it's possible that enough power can be crammed in to boost the ship 6 to 8 knots, it seems unlikely without regiggering the hull.

Nevertheless, even assuming a speed around 23kts, a large vessel optimized for extended economical cruising is just what is needed for ABM patrols. The fact that this vessel can do other missions, is perfectly capable of keeping up with the Amphibious ships, is off the shelf, steel hulled and relatively roomy would seem to be a very very useful bit of kit that could be obtained for minimal risk and expense compared to it's capability.


*The Brits determined during WW2 that a sustained speed of 23 knts was the minimum adequate for escorting fast carriers, but that was before nuclear carriers and in any event the USN generally requires 28-30 kts for front line vessels to keep up with the CBGs.

**UPDATE: It seems that they have a flagship version already designed to replace the Blue Ridge class along with several other auxiliaries. . This doesn't mean that extra C&C space is unwelcome of course.

1 Since the biggest naval advances are what you put in the hull these days, using a proven hull that is already in the Fleet as a container for the new gizmos seems like a good idea to me.  So of course, we need to develop an entirely new hull from scratch to hold all the new gizmos...

3 Steel is cheap in comparison to everything else.

A BMD ship has to maintain station in all weathers and fight while hurt. Both of these requirements require some size.

Also missiles, ABM radars and their electronics are VOLUME critical (not weight critical). One of the lessons of the missile age is that you can't have too much volume.

The Ticonderoga class is really too cramped to do what they do (they were a stopgap design thar involved slapping the huge radars that had been designed for s cruiser on a destroyer hull.

BMD ships that have been designed over he years have tended to be 25-35000 tons and even a study to design a Ticonderoga to acceptable space/weight standards and incorporate the all steel construction of the Arleigh Burke class destroyers resulted in a 14-15000 ton ship.